It’s very hard to imagine a street photographer today working in relative anonymity. Social media sites have become our galleries, providing easy accessibility and near-constant availability. There is natural compulsion to share, and not just for the sake of recognition. Sharing is used to network and to garner critique and feedback. Few street photographers make a living solely practicing their craft, but there are rewards to reap through sharing. One can make a name for themselves, which can be satisfying enough. Street photographers can also win money and gear through online entry into contests held by websites, physical galleries and other organizations. But at the end of the day, we want our work to be seen. We may say how much likes and little hearts and stars don’t matter, but we still want others to view our images. Getting eyes on our work is just a post and a few hashtags away. 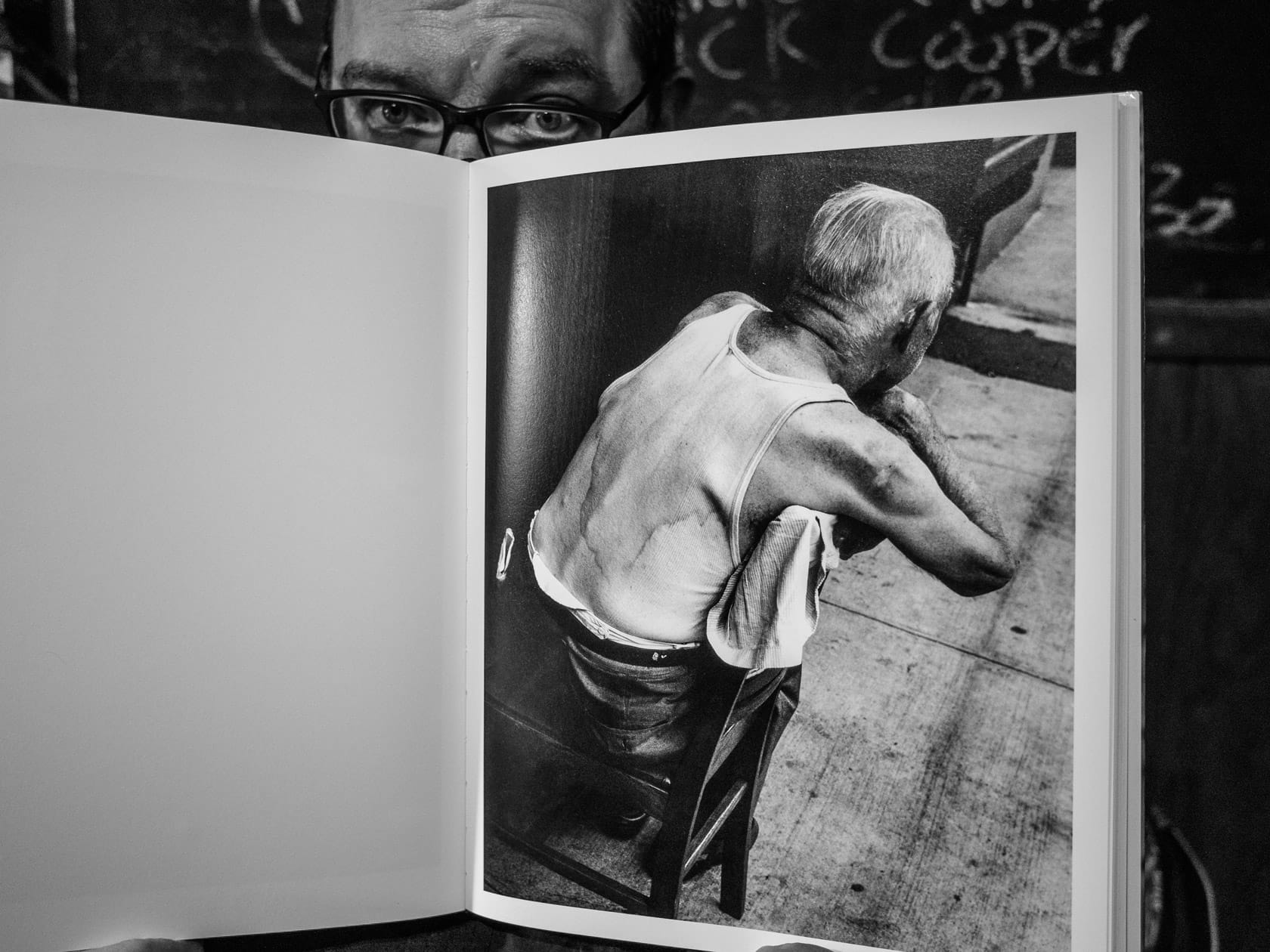 Now turn the clock back to the 1950’s and ‘60’s, an age when street photography was nowhere near being the popular darling it is today. Pre-internet days that seem like ancient history in today’s world of mass sharing and exposure. A street photographer looking for exposure would face a steep climb. Humping their portfolio around. Their best bet for exposure coming from a gallery exhibition or in a magazine. The ultimate would be having a monograph of your work published. And even if you just wanted to share your work with your peers, it wasn’t as easy as uploading an image. You had to print it and carry it with you. No riding the digital gravy train. It was all analog and it was work. However acclaim and praise found street photographers in the fifties and sixties. Some of the finest examples being Garry Winogrand, Diane Arbus, Robert Frank and Joel Meyerowitz. 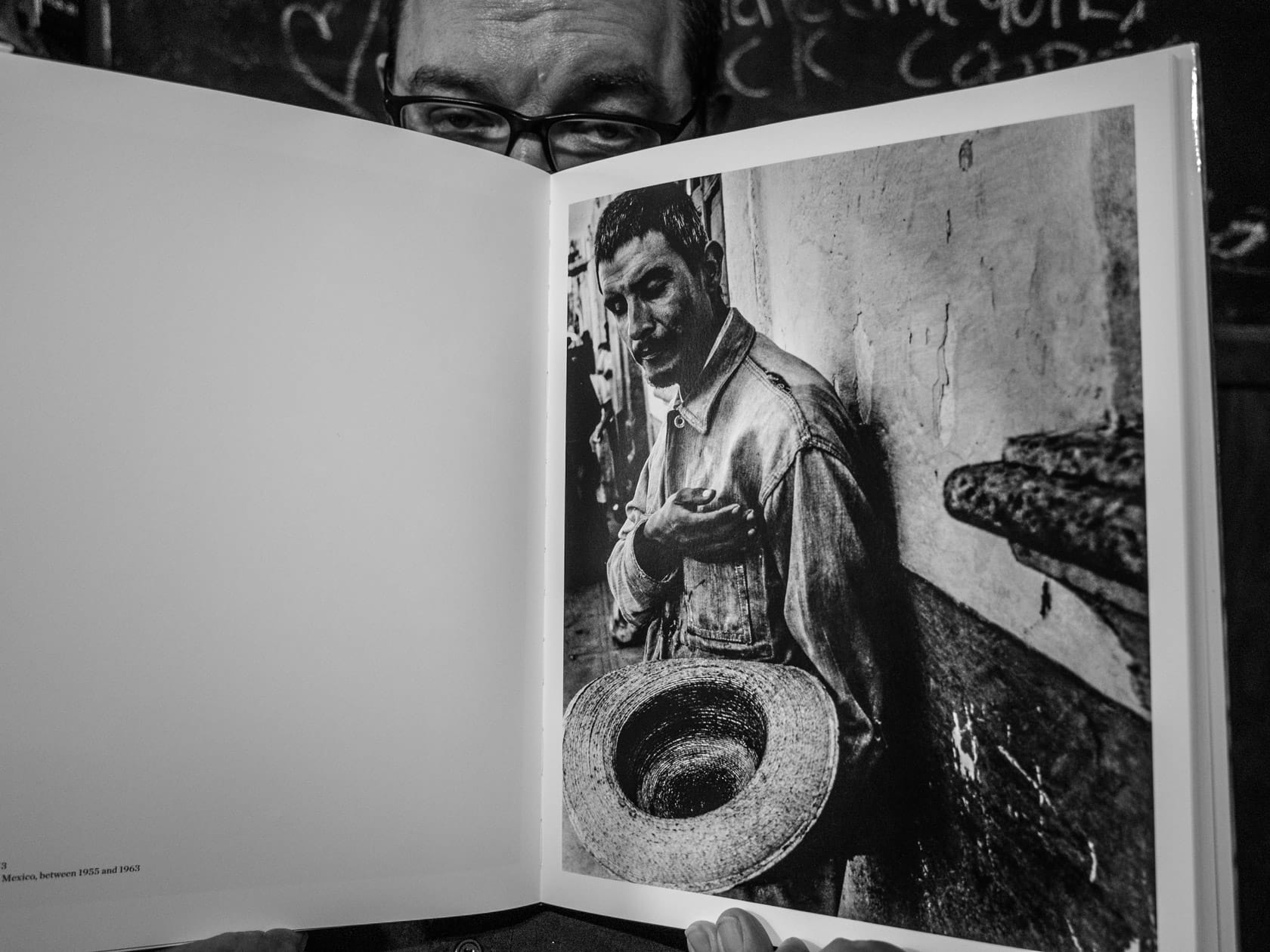 Leon Levinstein was a peer of those well-known street photographers, but his work was just as strong, and, at times, arguably stronger than theirs. 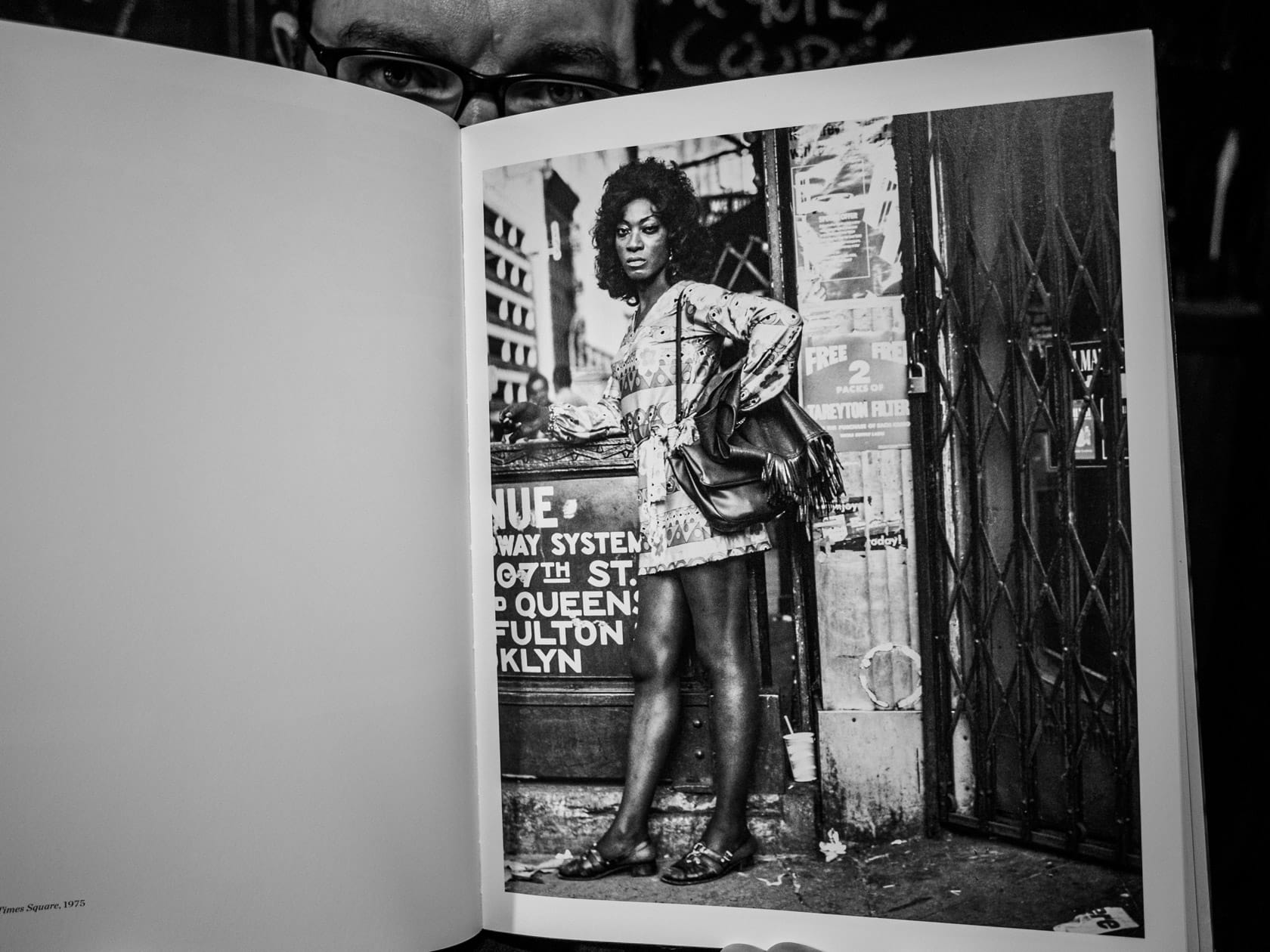 That may seem like a particularly bold statement about a photographer who you most likely haven’t heard of before. However, if you spend some quality time with the epic ‘Leon Levinstein’ (Steidl, 2014), it’s also likely that you’ll come away thinking the same thing and asking yourself, “why have I not heard of this guy before?” 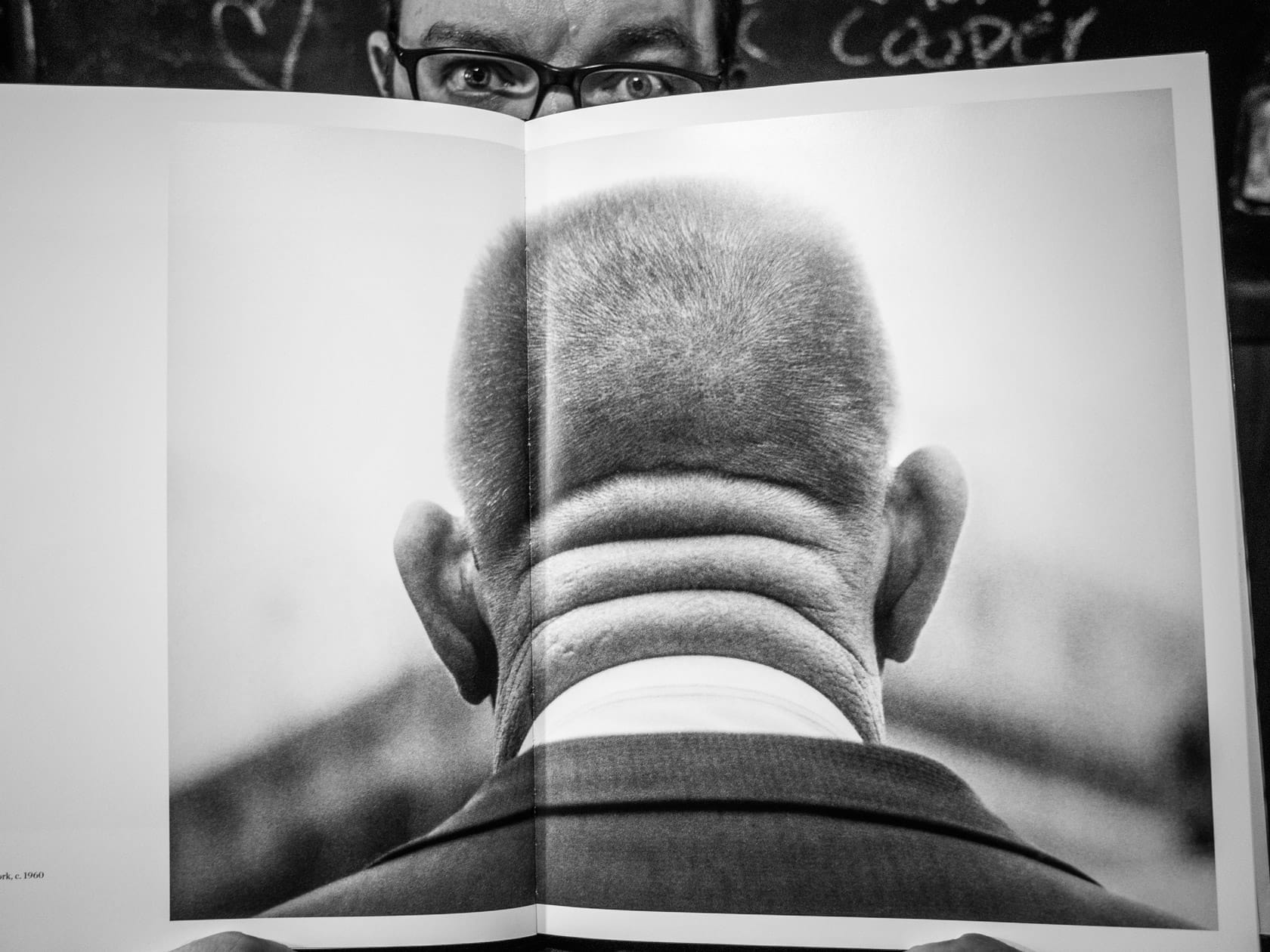 Leon Levinstein (1910-1988) pursued his passion in obscurity, and all I’ve researched on him says that working out of the limelight was partly by choice. He rarely worked on assignment like many of his peers did. Consequently, there is not much information out there about him. Levinstein, who made his living as a graphic designer, moved to New York in 1946 and took advanced workshops with The Photo League’s legendary founder, Sid Grossman. Soon thereafter, he was mentored by Alexey Brodovitch, artistic director of Harper’s Bazaar, and Edward Steichen, who was a curator at The Museum of Modern Art in New York and a renowned photographer himself. Levinstein’s photographs were eventually included in nine group shows at the MoMA, including Steichen’s landmark ‘Family Of Man’ exhibition. In that exhibition, Levinstein had his work sharing space with the likes of Arbus, Bill Brandt, Brassai, Elliott Erwitt, Dorothea Lange, Arthur Leipzig, Helen Levitt, Gordon Parks and W. Eugene Smith… just to name a few. Indeed, the man had talent. 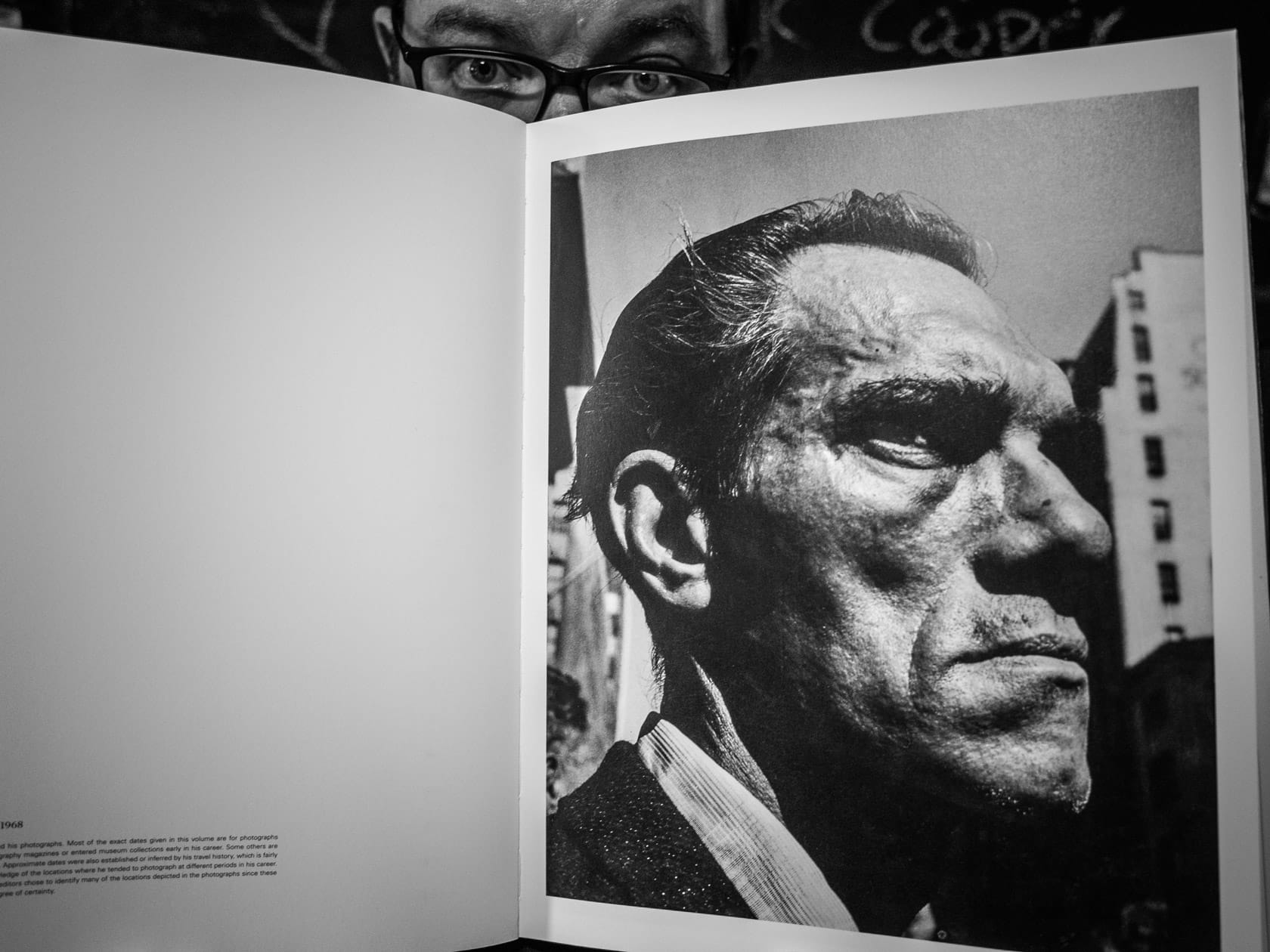 For over three decades, Leon Levinstein spent his nights and weekends photographing on the streets on New York and occasionally in other places like Mexico, India and Nepal. He did have work featured in several magazines throughout the 1950’s and ‘60’s and even had a solo exhibition at the Limelight Gallery, the first American gallery devoted solely to the exhibition and sale of photographs, in 1956. In 1975, Levinstein applied for and received a Guggenheim Fellowship. However, because of his decisions to not work on assignment and to generally isolate himself from the art community, he did not have the opportunity to bask in the glory the other photographers were receiving, and never gained a foothold in the commercial photography market. 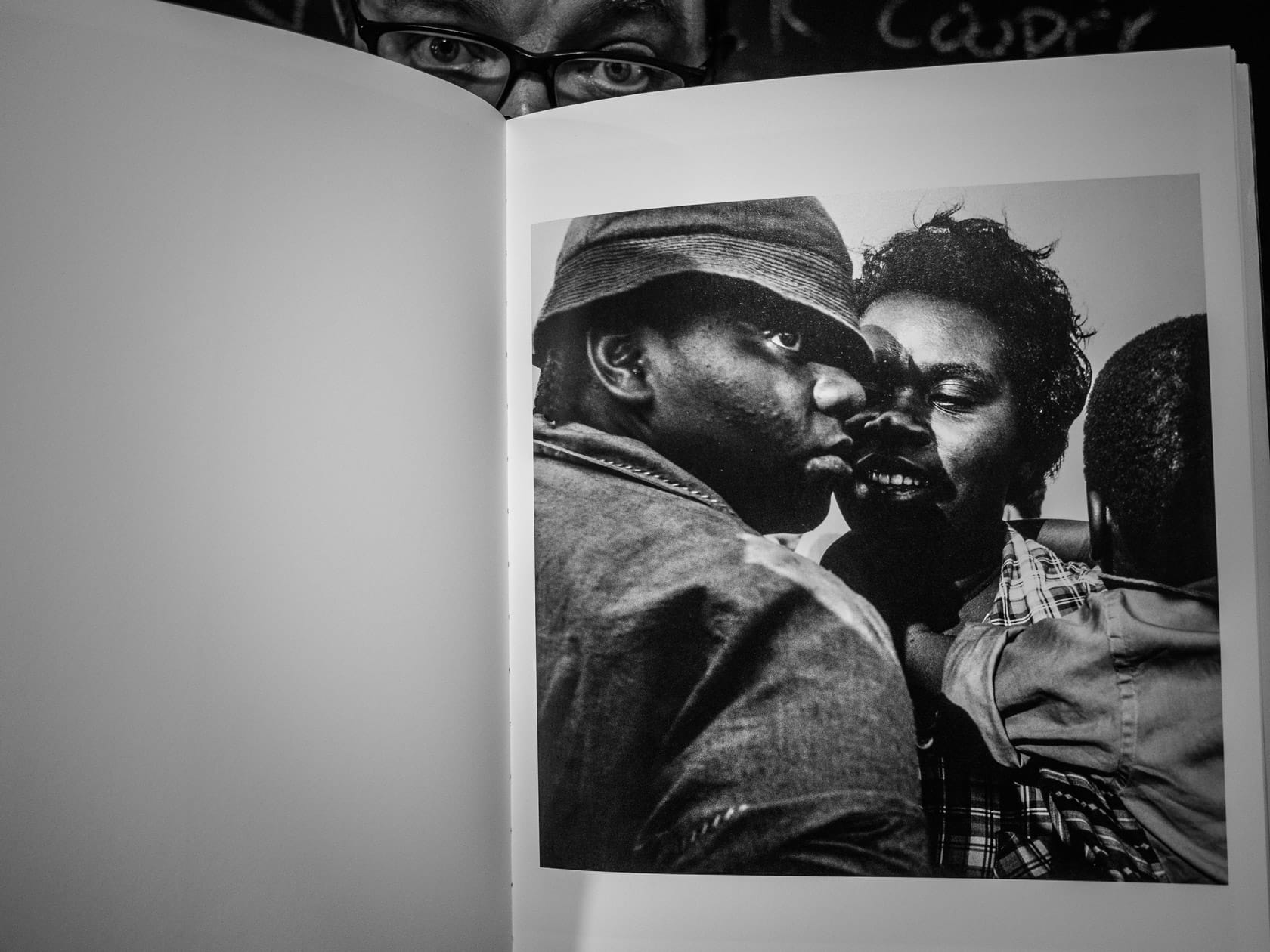 Levinstein passed away in 1988 without enjoying the fame achieved by some of the photographers of his time, but thankfully this monograph gives us a very generous sampling of what great work Levinstein did. He was a criminally underrated master of the street. Honestly, I have no recollection of how I came across his work, but I do remember diving into the internet wormhole… searching for more of his work. I became enchanted, the feeling reminiscent of falling under the spell of Vivian Maier’s work. An almost similar story as well, discovering a treasure trove of a previously unheralded photographer. 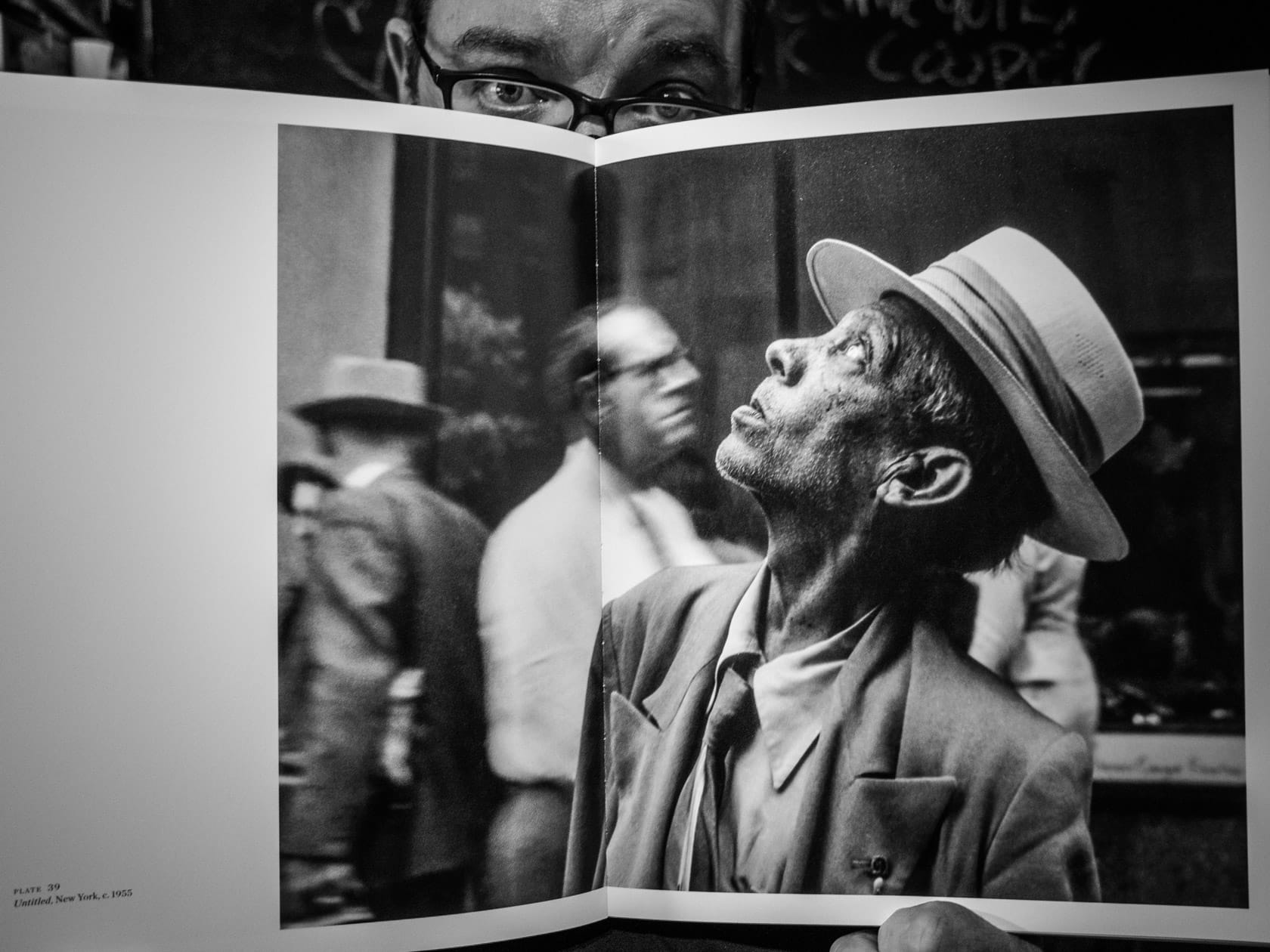 But what makes Leon Levinstein’s work so good? There’s a few reasons. His work was raw but yet mostly poetic. A look at his work from the streets of New York is evidence of a photographer relentlessly searching to photograph the poetry that was all around him, but with fragments that were not necessarily romantic. He worked close, often uncomfortably so and sometimes unflatteringly so. Fragments of bodies and faces. Images, at times, reminiscent of the work done by Mark Cohen and Bruce Gilden, the latter whom Levinstein befriended later in life. Like them, he worked in his subject’s personal space and he did so fearlessly. However, he did it before them but mostly without flash and candidly. This covert approach presents an incredibly honest feel despite obvious “sneakiness” of his enterprise. Never sentimental and always successful in placing the viewer in the scene, his work made this reader feel as if he was turned loose on the streets of New York City for the first time with a camera. For as personally prolific as Levinstein was, his eyes were always fresh in the Big Apple and anywhere else he shot. 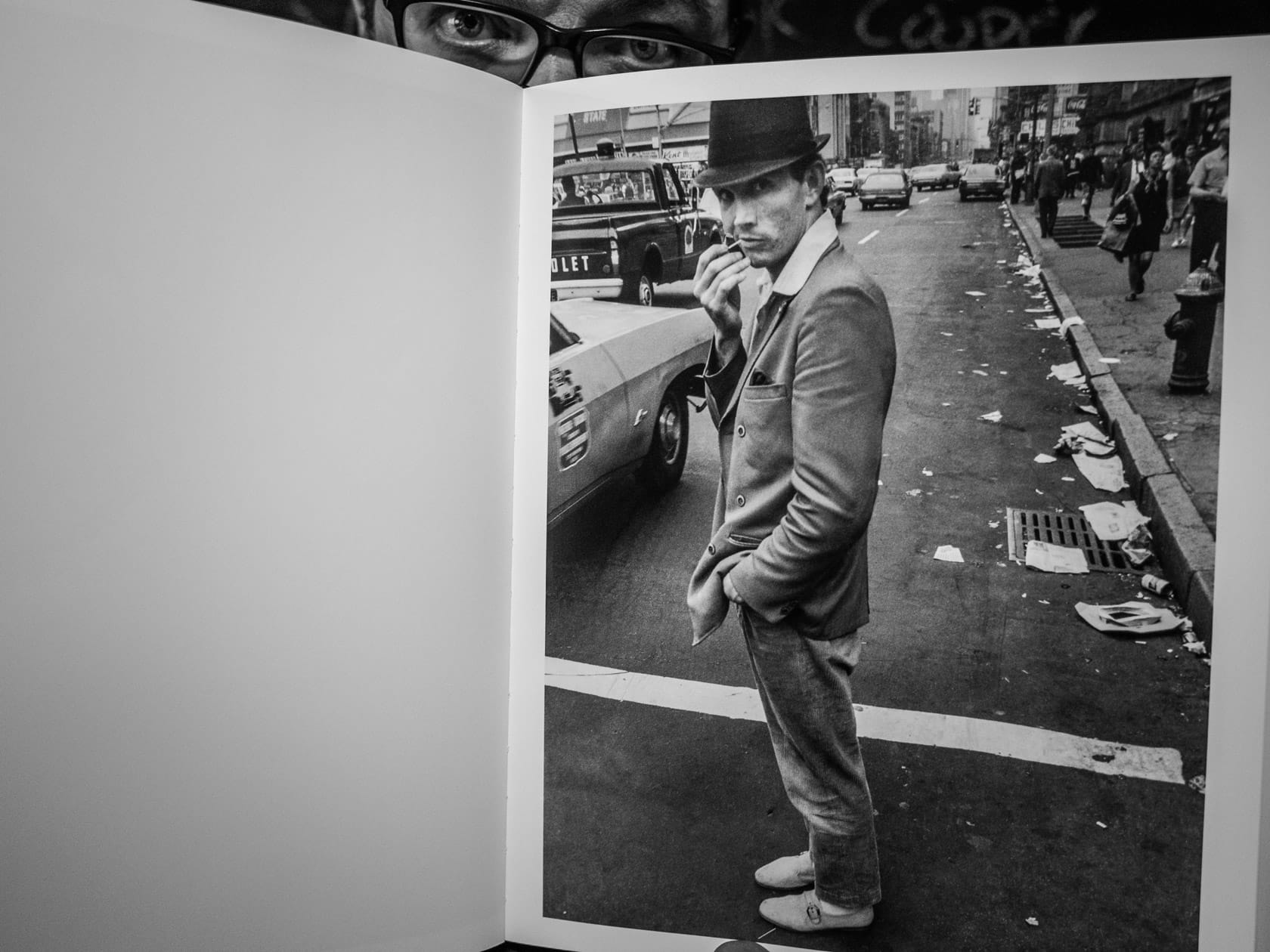 Levinstein’s work wasn’t all fragments and close-ups, though. His catalog is filled with scenes that are delightful little vignettes and movie scenes. And there’s a stellar cast of characters. Hipsters, hustlers, prostitutes, kids, couples and the everyday people of the era are the stars in Levinstein’s show. Within the monograph is superb shots from another famous photographer’s playground… Coney Island. The book’s monumental monochrome jacket gives the reader a taste of what’s to be found inside with a great shot of a sunbather’s back, the upper portion of which brilliantly reflects the light while rest tapers into various darkening shadows. Levinstein worked light and shadow brilliantly at points, along with his point of view, which was edgy for the era. He also delivered incredibly sharp images, rich in detail and making both his off-kilter and more straight work even stronger. 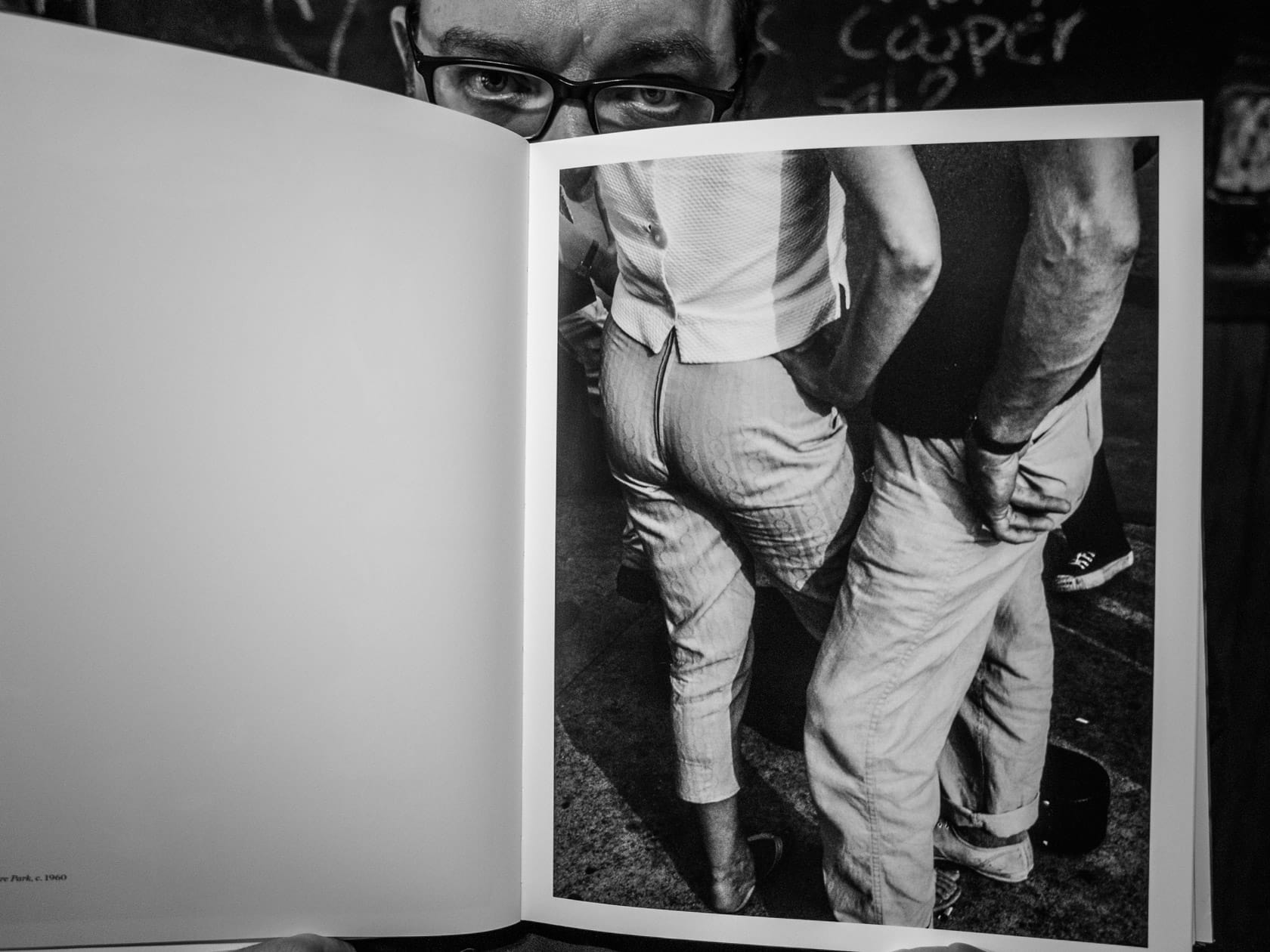 Even though he did not receive the acclaim he deserved during his time, ‘Leon Levinstein’, is a huge testament that the cream will eventually rise to the top and that true art endures. By huge, I mean this book is a beast. At 320 pages, 10.4 x 12.4 inches and almost six pounds, this tome is a heavyweight. This is not a book that you’ll be carrying around in your backpack or messenger bag. Its place is a table or a lap where one can get lost in Levinstein’s world. What he saw through his lens is beautifully reproduced by the great publisher, Steidl. The thick, glossy pages are rich and robust and a pleasure to touch with each turn. Most images occupy only one half of the spread, opposed by a blank page on the opposing side, with exception of the three-quarter spread images. This layout, which I often thought as wasteful, is appropriate. I get it now. It is respectful to the image. The equivalent of viewing hung work in a gallery. Each image is given the opportunity to be savored and doesn’t vie for attention against another. Seeing as this is a retrospective published posthumously, it feels only right. Also included is a fine essay on Levinstein written by Bob Shamis and another on Levinstein’s color work by Carrie Springer. 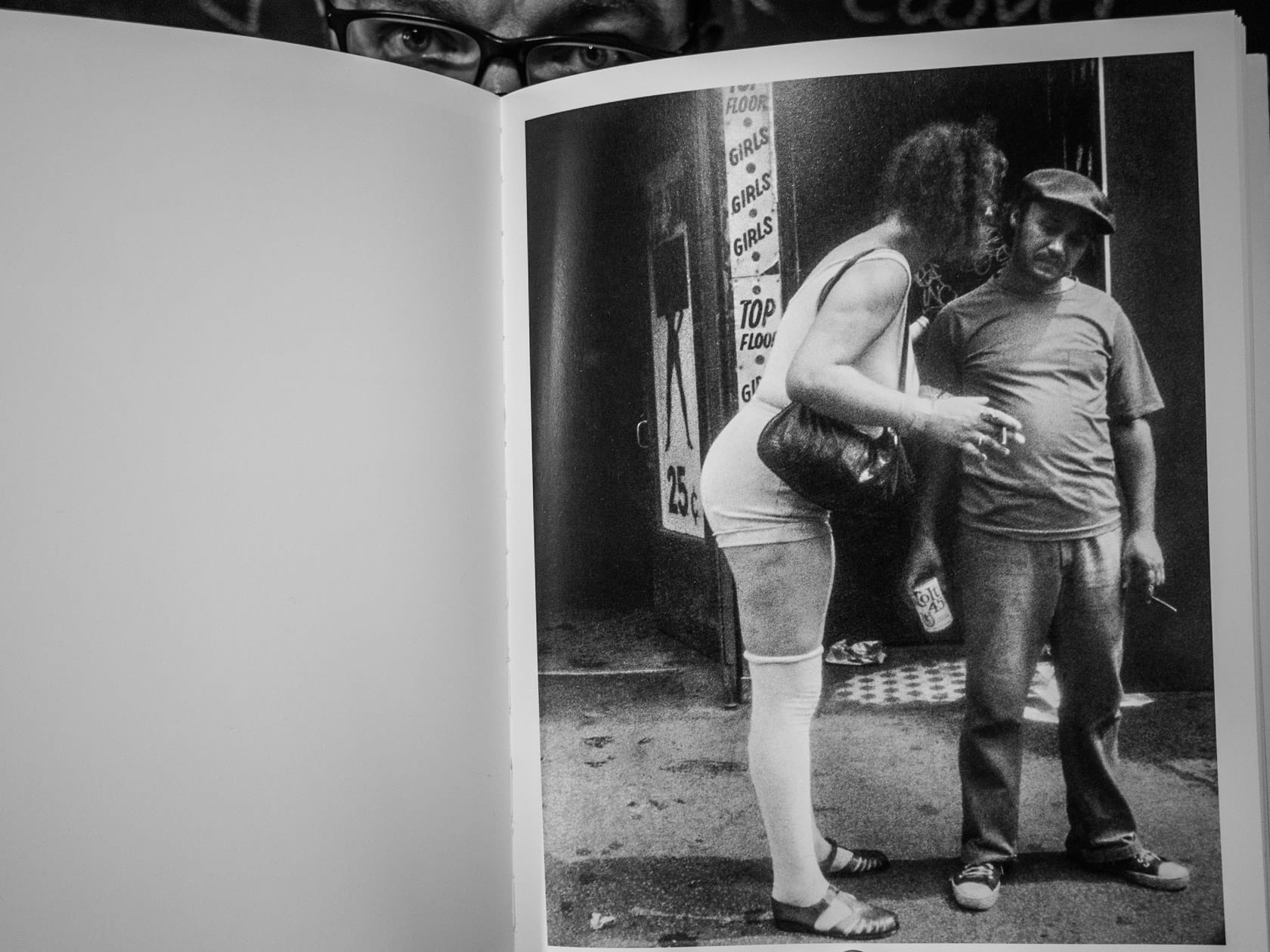 However, there is one drawback to obtaining ‘Leon Levinstein’ and that is its price. The price tag on this hulking book is nearly $80 USD on Amazon. Also, here’s full disclosure… I obtained this with a big discount and bought it for around $50. The question is, obviously, does the book merit the high price? Yes, yes it does. The images are splendid and the quality is outstanding. However, I understand that such a leap of faith, with Levinstein being relatively unknown to most, is a lot of hard-earned cash to gamble with. I, for one, am extremely happy that I did. The only other books I spent this much money on were Garry Winogrand’s catalog and Mark Cohen’s ‘Frame‘, both sensational books. Is it as superb as those? Almost. Levinstein’s work is terrific and I find myself getting lost in this collection for large chunks of time, but I would definitely recommend either of the aforementioned books over this if you have that kind of money to spend on a photobook. And I could also argue that you could spend that amount of money on four or five really, really good zines. 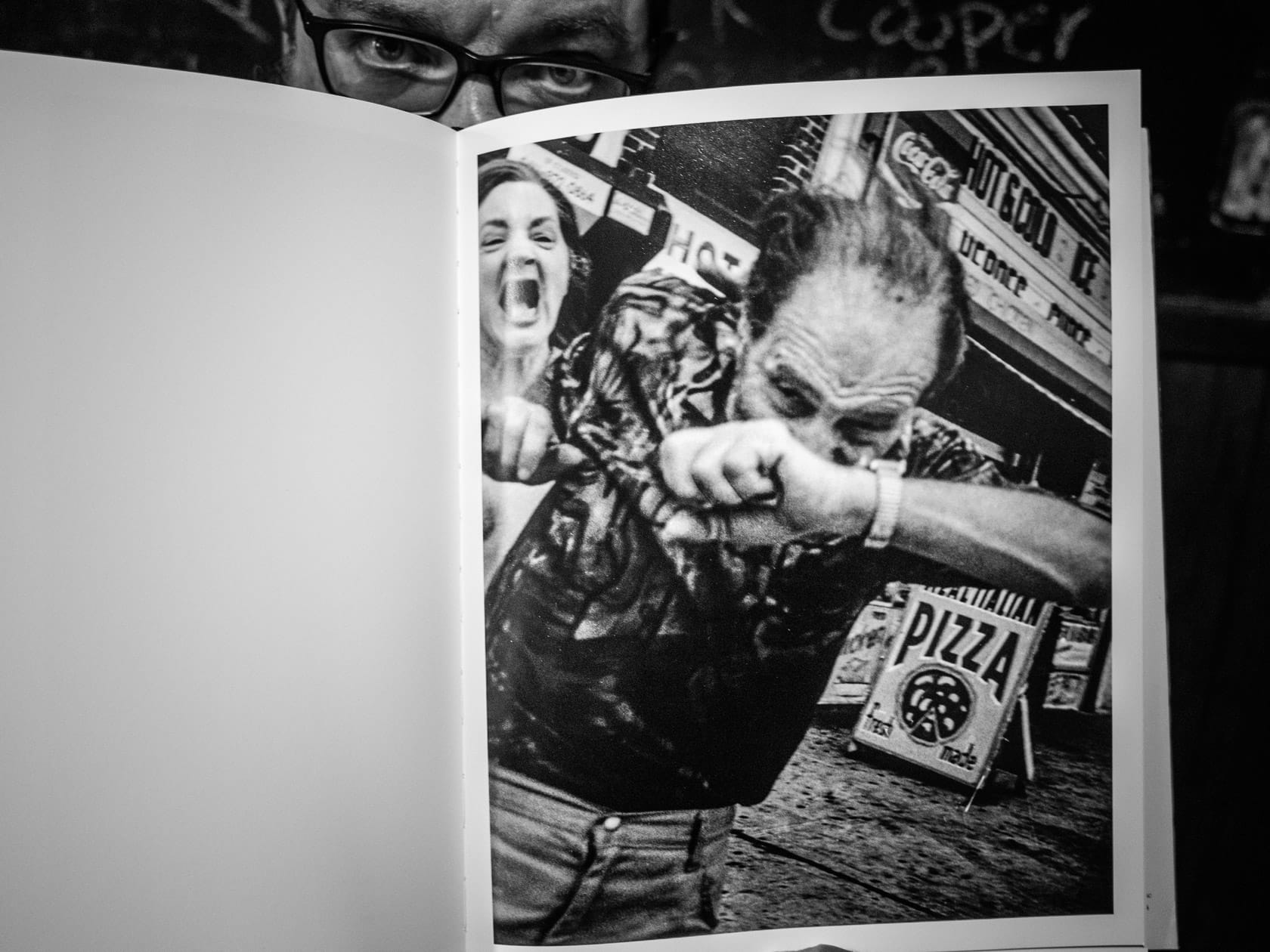 I’ll finish with this. The biggest joy of doing these reviews and the Under The Influence series is turning you on to photographers that you may have never heard of before. I truly love sharing the excitement of my personal discovery, and if it moves you to further investigate a photographer, it’s worth every minute spent doing these. Looking at Leon Levinstein’s work is worth your time, and if you’re moved like I was, this book is worth your money. 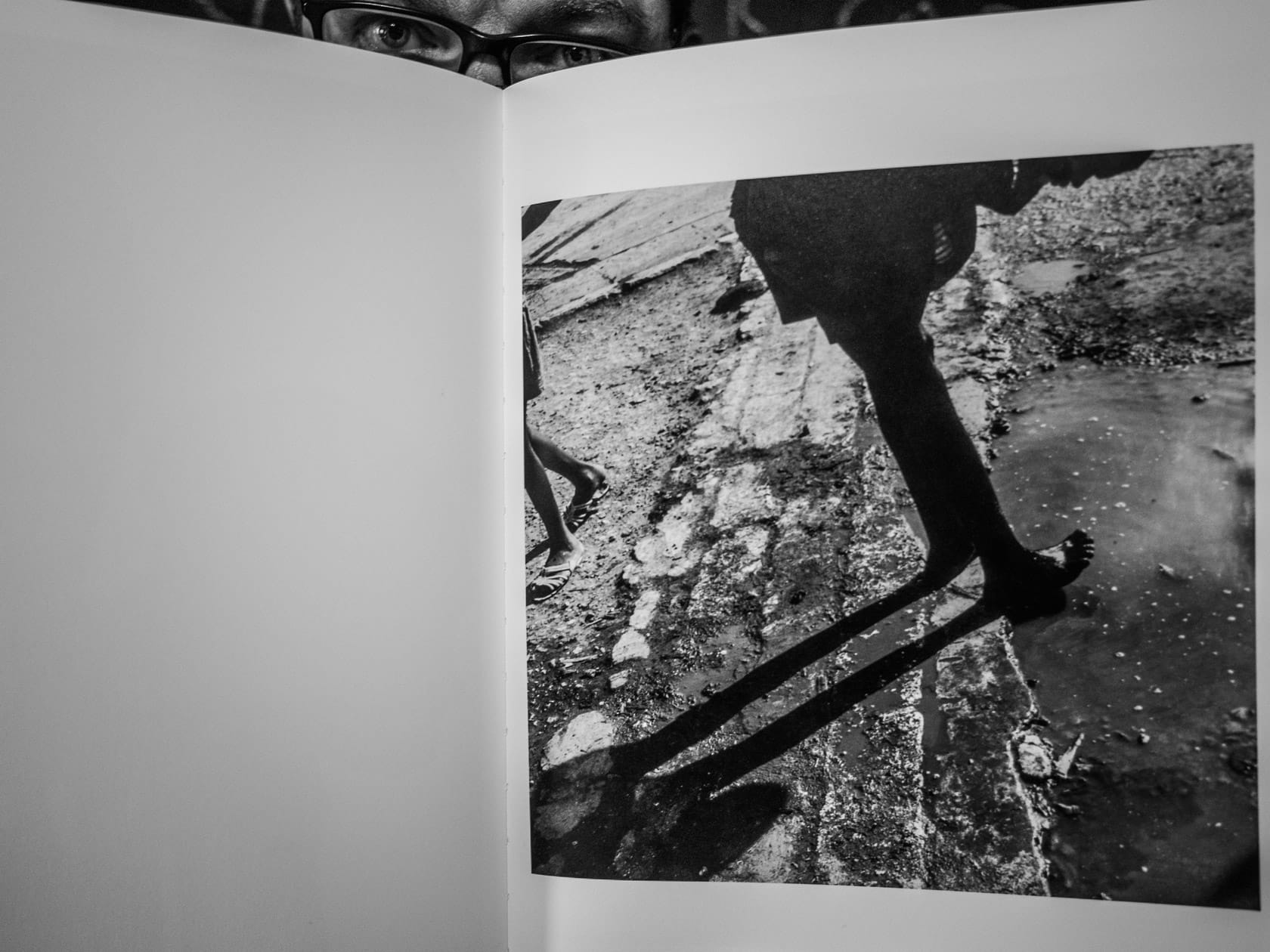 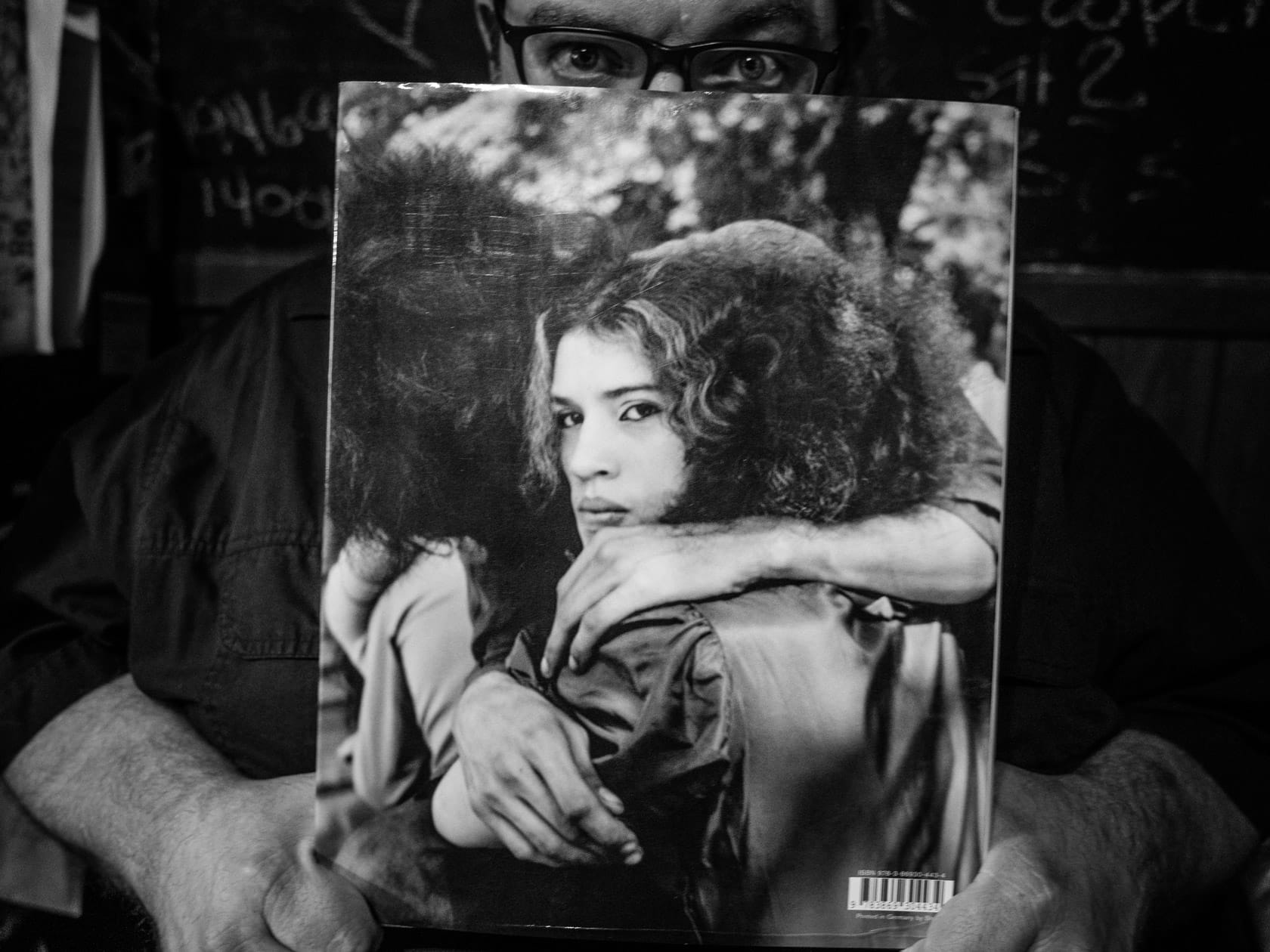