Home Masters of Photography Under The Influence of Elliot Erwitt 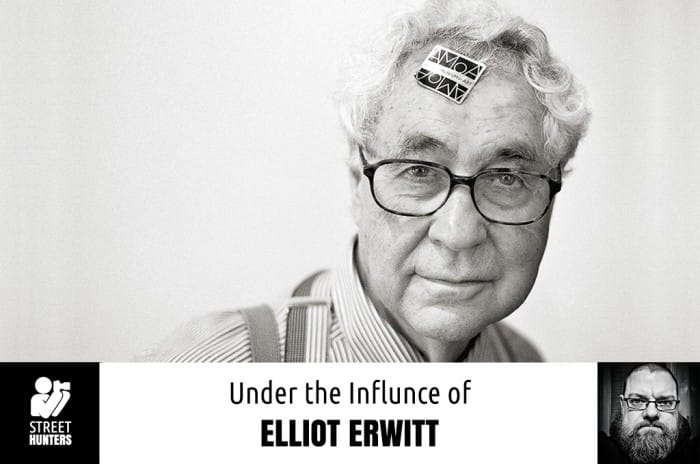 Ask me to name my favorite photographer once or month, or even once a week, and each time you’ll get a different answer. That’s the joy of this new found romance, photography. But had I “discovered” Elliot Erwitt first, before all these others I’ve researched, I don’t know if that opening statement would hold true.

Elliot Erwitt (1928-present), has been a photographic dynamo, and a durable one at that. In a career spanning five decades, he has been one of the world’s best and celebrated photographers. Being both a fan of historical images and ones that can deliver wit in a clever way, Erwitt’s work is the latest goldmine that I’ve been digging. And the mine is deep. Fifty-plus years worth of digging will give you that depth.

In the late 1940’s, Erwitt moved to New York and met two people that would eventually help chart his course into photographic legend. The first, Roy Stryker, was the head of the Farm Security Administration. This was the same agency that employed Walker Evans and many other greats to document different afflicts of American culture. Stryker eventually commissioned Erwitt to document the city of Pittsburgh. Around this time he also met Robert Capa, the founder of Magnum Photos. After a stint with the Army, Erwitt signed with the agency and his star began to rise. He traveled and took on commercial work. Erwitt took on work photographing celebrities and shooting stills on film sets. Stars like Marilyn Monroe, Marlene Dietrich and Jack Kerouac found themselves in front of his lens. But through the 1950’s and 60’s, Erwitt delivered some of the most memorable images of political figures of the time. Nixon, Khrushchev, Castro, Johnson, DeGaulle, Brezhnev, the Kennedys were just a few. An iconic image of Nixon poking at Khrushchev in a heated argument was eventually used by Nixon on campaign posters. Erwitt  was cementing his status as a legend.

Those weren’t the only tricks up  Erwitt’s sleeve though. Erwitt continued to shoot for himself, and his “snaps” only furthered his legend. His personal work was, and continues to be, an example of how delightfully playful photography can be. Some of my favorite images of his are not only beautiful in regards to composition and execution, but have the bit of whimsy and humor that make them even more wonderful. From humorous images involving nudists to “cute” pictures of dogs that compel you to take a longer look in order to really enjoy a particular juxtaposition, Erwitt knows his way to the lighter side. He had even cultivated an alter-ego, Andre S. Solidor (check how that is abbreviated) to poke fun at the excesses in photography and the art world.

So much can be taken from Elliott Erwitt because he’s that good at what he does. What he does, what he’s able to do, is photograph anything, anywhere. And that is, arguably, the most important thing I can take from Erwitt: versatility.

“Working myself into a position of total versatility, so that I can do anything I want to do at the time I want to do it. Whether I do it or not is another question.”

This quote from Erwitt can be directly associated with his ability to shoot as a photojournalist, a commercial photographer, or for his personal pleasure. However I think it can be applied specifically to the ability in which we see things as photographers.

“To me, photography is an art of observation. It’s about finding something interesting in an ordinary place…. I’ve found it has little to do with the things you see and everything to do with the way you see them.”

With that, Erwitt brings it home. It’s a stretch to say there’s a picture everywhere you look, but that’s not too far off the mark. But the ability to observe, to really observe, and see the potentially interesting scene is the key. To be in any given place, any given time and any given situation and be able to see a picture is a great tool to have in your box. And possibly, the most useful one.

The breadth of different work that Erwitt’s capable of reflects on his ability to observe. And with that ability comes the versatility. Although I’m quite sure Erwitt would downplay this, it has to take a special eye to help achieve this versatility. That and work. A lot of practice. Practice shooting anything and everything. To shoot a political demonstration one day and the charming interaction between a dog and it’s owner the next. And, to be able to see them both in different ways. To approach them in the way that makes the respective images more interesting. Those two scenes, I believe, can be shot differently to achieve different impacts. They need to be seen differently. That’s the versatility I want. Ready for anything, anytime.

And on that note, I’ll leave you with yet another gem from Elliott Erwitt in regards to the gospel of just keep shooting.

“Making pictures is a very simple act. There is no great secret in photography…schools are a bunch of crap. You just need practice and application of what you’ve learned. My absolute conviction is that if you are working reasonably well the only important thing is to keep shooting…it doesn’t matter whether you are making money or not. Keep working, because as you go through the process of working things begin to happen.”