That being said, “Garry Winogrand”(Yale University/ San Francisco Museum Of Modern Art, 2013) is a long look at one of the greatest photographers of the twentieth century. And by long, I mean long. This beast of a book arrived at my doorstep weighing over six pounds and containing 448 pages. For a Winogrand fan it’s a must. For someone unfamiliar with him or street photography, it’s an excellent introduction to the genre and one if it’s pillars.

Garry Winogrand(1928-1984) was one of, if not the most prolific street photographers ever. He left behind over 35,000 prints, 22,000 contact sheets and over 40,000 color transparencies. He also left over 6,000 rolls of unprocessed film. Consider that for a few seconds. That’s an incredible amount of images. Now imagine going through that archive and the unprocessed rolls and putting on an exhibition. “Garry Winogrand”, in all it’s majesty, is the retrospective catalog accompanying the expansive exhibition that debuted at the San Francisco Museum Of Modern Art in 2013. It also made stops in Washington, DC, New York City, and just wrapped up at Galerie nationale du Jeu de Paume in Paris. 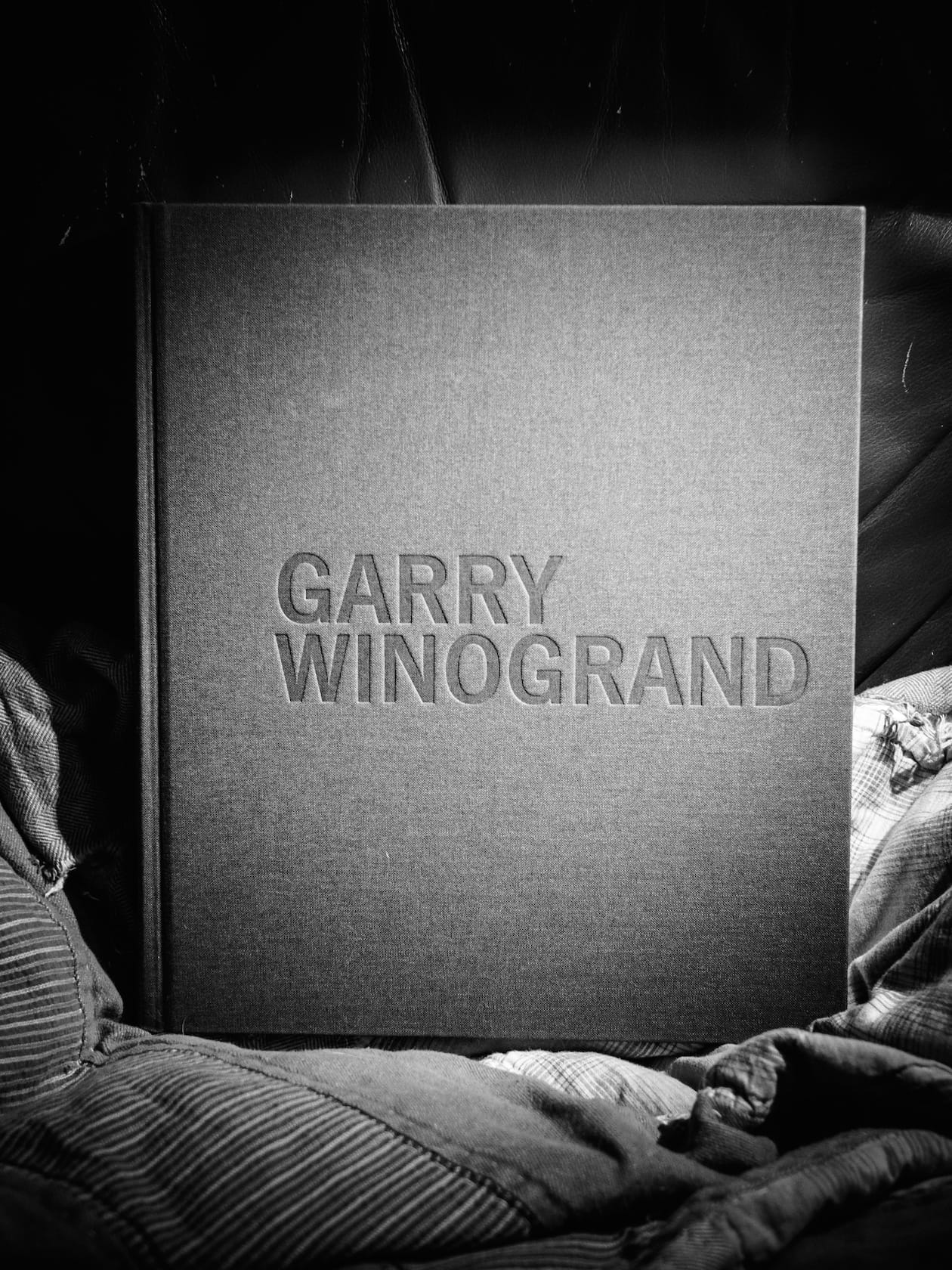 “Garry Winogrand” isn’t merely a catalog to the exhibition, though. It’s scale makes it a tome on street photography from one of the masters.

However, even though it contains hundreds of images, it is more than a photobook. Included are essays from Sarah Greenough, Tod Papageorge, Sandra Phillips, Erin O’Toole and the editor, Leo Rubinfien. The essays make this less of a look-book and more of an experience. They bring the reader a little closer to Winogrand. I found Papageorge’s essay to be particularly heartwarming, even though it may not have been the author’s intent. Knowing that he and Winogrand were close friends, the essay brought Winogrand back down to earth for me as it reflected on that friendship. O’Toole’s essay on posthumous editing is a great read as well, especially when one considers the volume of work Winogrand heft behind.

Even though the essays are splendid and insightful, the real reason to indulge with this book is the images. Somewhat scattershot organized, Winogrand’s entire career is well represented. The plate/image portion  of the book it’s divided into three sections: Down From The Bronx, A Student Of America and Boom And Bust.

Down From The Bronx 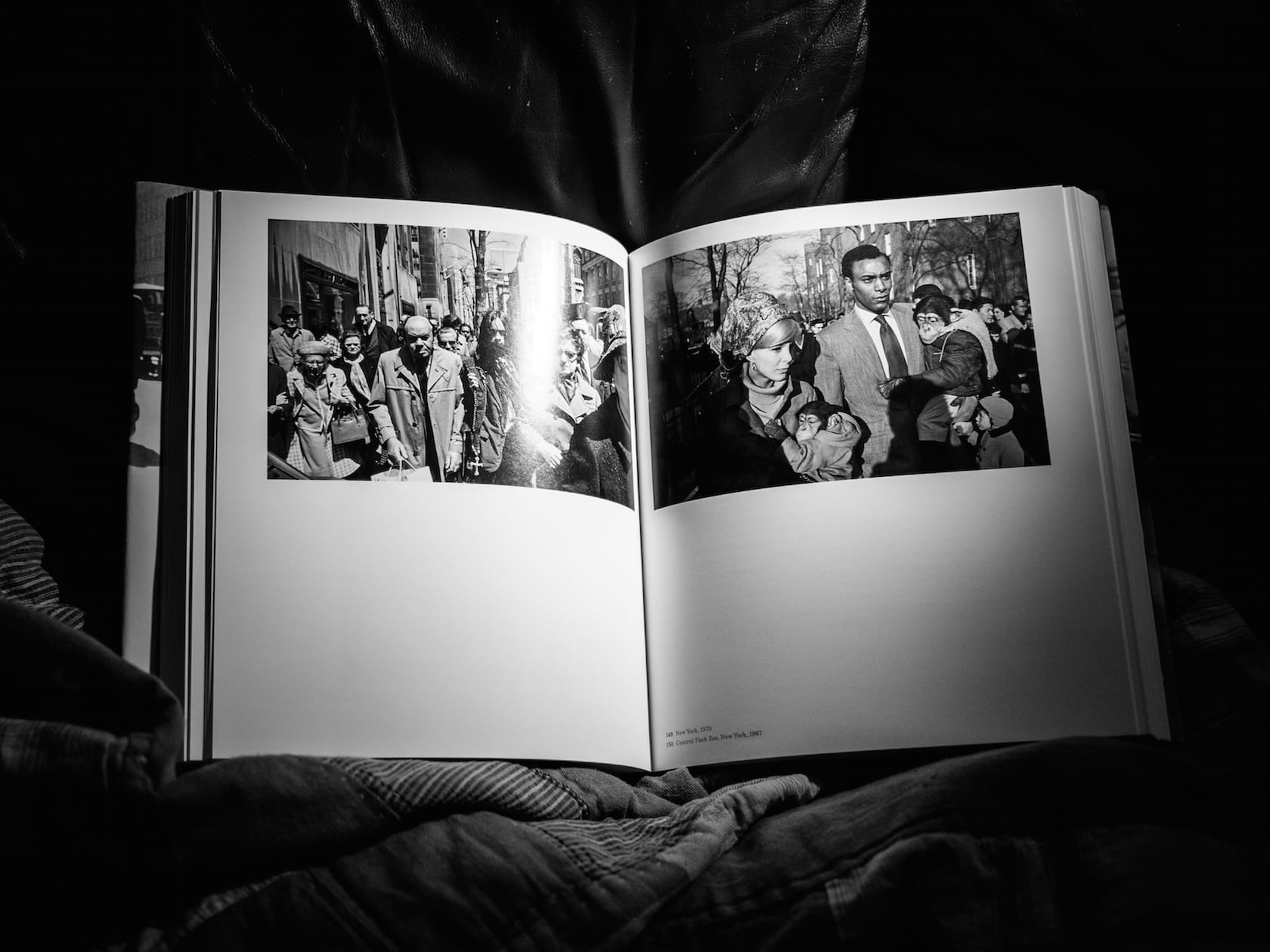 Down From The Bronx, my favorite of the three, shows Winogrand’s early work. It’s part love story and part scientific study of his native New York. It’s so engrossing, you feel like you’ve gone back in time and began leafing through your own portfolio, triggering emotions and senses. Covering a period from 1950 through the sixties, it’s a remarkable collection of images that show the city’s inhabitants through a master’s lens.

And within this section, like the others, are groupings of like images… couples, animals, detail. The groupings almost provide a resting spot for the eyes and mind, considering the seemingly endless assault of images otherwise seems frantic, relentless… much like the way Winogrand shot on the streets. Google any videos of Winogrand in action, and you’ll understand. But this energy is also part of the book’s charm.

A Student Of America 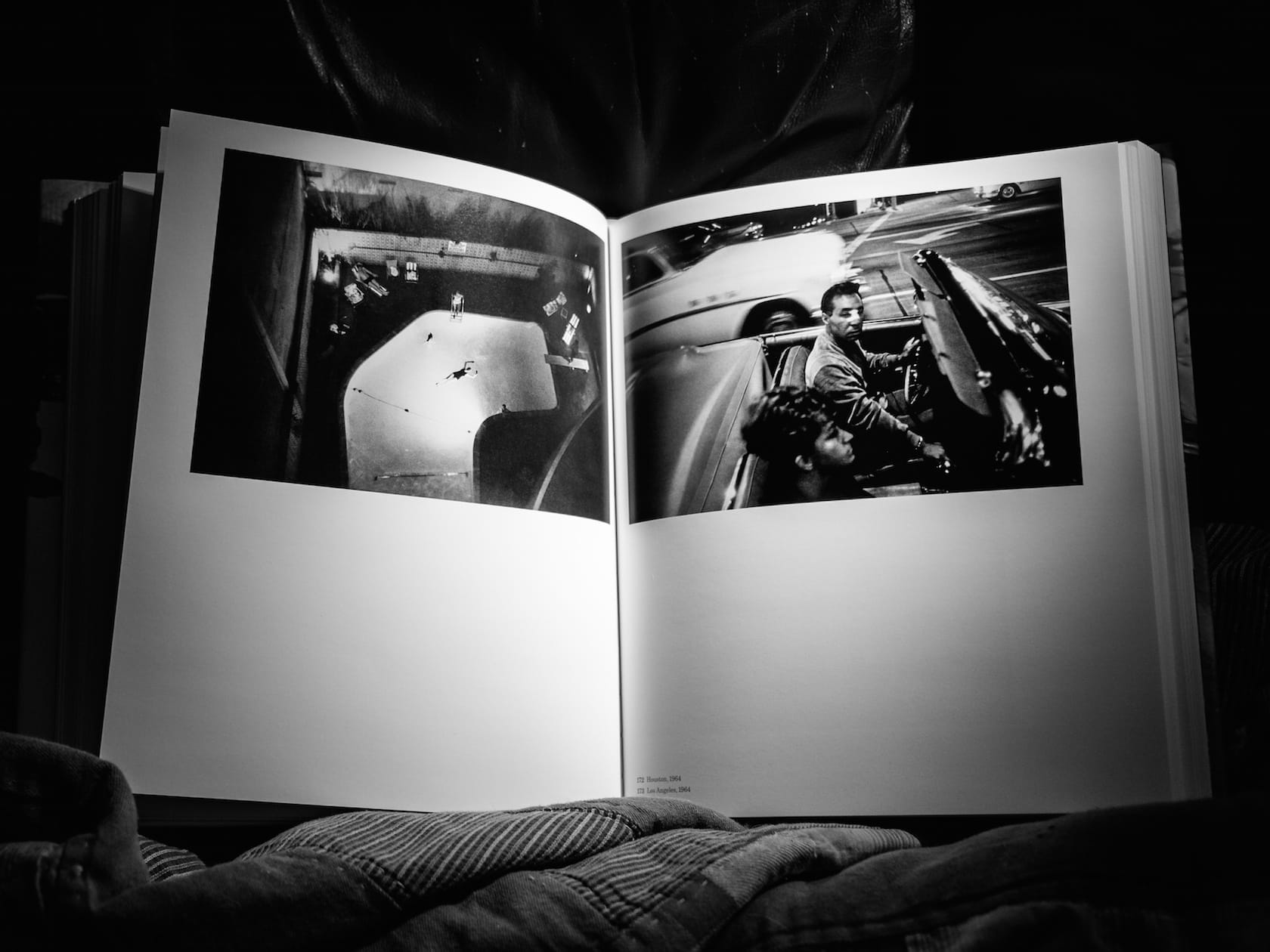 A Student Of America is like Winogrand on tour. It shows a change, a growth, in his style with him sitting outside of his native New York. This section offers up images from the American southwest, Los Angeles, airports, political conventions, demonstrations and even parties. Winogrand was truly a “student of America”, and this section is testimony to that. Even though there are some images from New York, the bulk feels less like the city. Less confined. Less tight. It feels broad and wide and it’s fantastic.

The last section, Boom And Bust, has an almost bittersweet feel. Knowing that this section focuses in the last period of his life makes it so. The introduction states that “approximately 80 percent” of the section’s work was “selected by posthumous editors from film left unprocessed or unproofed at Winogrand’s death.” Some say this period was Winogrand’s weakest work. While not as strong as his earlier images, this work is far from weak. Yes, there are some images here that seem like “filler”, like stock photos that world accompany a generic encyclopedia entry for “street photography”. But there are some gems as well. Regardless whatever critics say about Winogrand’s work during this period, these images seem necessary to appreciate and understand his whole career. And it almost makes me wonder, as his days ended on the west coast, if he missed New York.

The chronology, list of plates and selected exhibitions and selected bibliography that close the book make “Garry Winogrand” a near-perfect resource for the photographer and his legacy.

It’s hard to imagine that any photographer, or lover of photography that appreciates street, not being a fan of Winogrand. And at over $50, this titan of a book is for more than just a casual fan. But it is indeed a solid investment. It’s quality is incredible. The thick paper, the quality of the print, rock-solid binding, and embossed cloth cover back up the investment. And I see this investment paying dividends for years and years to come as it will be returned to often. Consider this a keystone book in the StreetHunter’s bookshelf.