Home Masters of Photography Under The Influence of Helen Levitt

It’s been said that we are judged by the company we keep. Certainly there is truth in that. As people, when considering our basic moral fiber, this applies. As far as street photographers go, this applies as well. I’m not saying that a photographer is good because they ran in a certain pack, but  this idea definitely holds water in the interest of research and discovery. Basically, when looking at the masters of the craft, if a name is mentioned as a contemporary of that great, the odds are… they’re worth checking out. And, it’s a low-risk bet that their work is going to be pretty damn good.

For example, look at this crew of contemporaries from the New York City scene in the 1960’s and 70’s: Diane Arbus, Lee Friedlander, Joel Meyerowitz and Garry Winogrand. All greats. Imagine them bouncing ideas off of each other, pushing each other. Great company. Going further back, consider this power trio: Henri Cartier-Bresson, Walker Evans and Helen Levitt. However, these three did not run together, so to speak. Helen Levitt was friends with both Cartier-Bresson and Evans. Though her name is not as hallowed as her friends’, Levitt was, without any doubt, a master. And the likely reason she’s not as “famous” was her reluctance to talk about her work, it’s that she shied away from the public eye, generally avoiding interviews.

Levitt was an immense talent and like others, didn’t get the full recognition she deserved in the twilight of her life and after death. Helen Levitt (1913-2009) began shooting street in the 1930’s. She was drawn to the poor neighborhoods, and often shot images of children playing. She also caught adults in slices of everyday life. In 1935 she met Cartier-Bresson and bought a Leica soon after. But Cartier-Bresson’s greatest impact was not the camera, but the idea of composition. Levitt also studied paintings to get a greater feel for composition. After that she met Walker Evans and they, too, became friends. Levitt was friends with two titans, with two different styles. In my opinion, you can see touches of both her famous friends in her work, but she had a style all on her own.

In 1939 her work was first featured in Fortune magazine. In 1940, she had a photograph in the Museum Of Modern Arts’ first photography exhibit. In 1943 she had her first solo exhibition.

After that, Levitt worked in film as an editor and a director. In 1959 she returned to photography but this time, she shot in color. She continued to shoot color into the 90’s. Stylistically, in my eyes, this was a huge change from her black and white work in the 30’s and 40’s. Both are fantastic. Two very different periods in time and two different styles. Levitt mastered both. 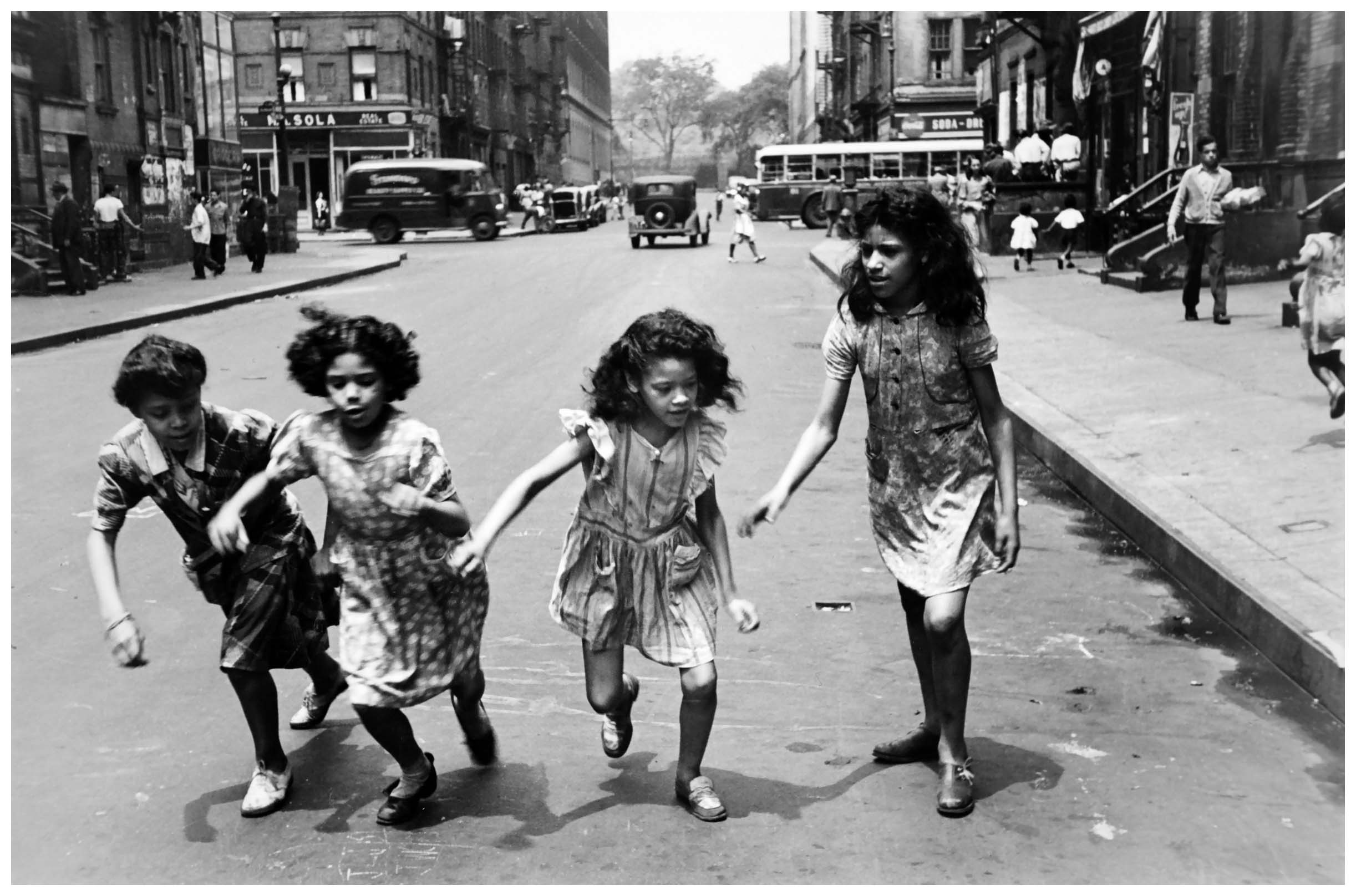 Helen Levitt’s images often brought a sense of joy, especially with the shots involving children. Other times, they touched on social awareness. And some presented both. But the one thing that really struck a chord was that the images were intimate.

When I say intimate, I’m not just referring to the closeness of the shot. Nor am I referring to just a private feeling. Helen Levitt was able to put you there, at the scene. That’s what I mean. You weren’t necessarily in the scene, but you were there. And you experience that sense and the feelings that come with it.

As I looked at her work, the photographs evoked emotional response. And not just a simple feeling of happiness or sadness. They stir a complex, deeper feeling. And a curiosity. And even a physical response… a smile, or a wrinkling of the brow. This is no easy feat for a photographer. Levitt could do it. Levitt was a master chef who combined simple ingredients to make a spectacular image. The composition and the moment were the base, her stock, on which she served up a filling image. And each one rich, deep and fulfilling.

Helen Levitt was able to do more than merely document with her camera. Her eye, her skill and her soul were able to put us in the scene. Not part of the scene, mind you, but actually there as she was. The benefit for us, on the outside, is that only she had that moment. The fleeting moment to both observe and capture. We’re able to linger with her images. We’re there, like she was, but we’re able to stop and stare. To soak it all in. We’re able to be there, precisely.

There’s powerful mojo in images like Helen Levitt’s. And that mojo is not acquired easily. Levitt herself said she was a “lousy technician” and that the technical aspect of photography “bored” her. Knowing this, it’s obvious that Levitt shot from the gut. The gut, in her case, is a detour. A side road linking the heart and the brain. A scenic route. And that trip is fueled by her mojo. I can only try to find and fuel my own.