Home Masters of Photography Under The Influence of Bruce Gilden

Bruce Gilden. In the circles we run in, the very mention of his name seems to part the masses like the Red Sea. There doesn’t appear to be anyone on the fence. Love him or hate him, that’s it. But the opinions on him always seem to go back to the way he works. Once one watches a video of him in action, an opinion is immediately formed. More on that later. Regardless of how he operates, there’s one thing that can’t be denied… he’s an amazing talent. His images back it up and they command respect.

Gilden(born 1946), has been with Magnum photos since 1998. Before I continue, let me say that by being a member of Magnum does not mean they are the photographic equivalent of a “chosen one”. But I’ll be honest, the name Magnum carries a lot of weight for good reason. Almost much everything I’ve seen from Magnum shooters is pretty damn stellar. Ok, let’s carry on.

Gilden is known globally as a street photographer and, from what I’ve read, he proudly considers himself one. He’s been walking the streets of his hometown, New York City, for over twenty years and bringing to us what most folk consider “hardcore” street photography. Why is it hardcore? Simply put, Gilden gets in people’s faces. And he’s still doing it to this day. “The older I get, the closer I get.”

Bruce Gilden doesn’t sneak candid shots. He pounces into the subject’s personal space with his camera and handheld flash and fires. Watch the available YouTube videos and you’ll see exactly what I’m talking about. There’s no stealth mode. No hiding. No being clever or coy. Just a full-frontal attack. This is how Gilden operates and what has forged his style.

Of course, this is what divides people. Some consider his technique an ambush on the subject. Even fellow NYC street photographer Joel Meyerowitz called Gilden a “bully”. Others consider Gilden’s approach the ultimate in street photography. That it captures us humans at our most raw. Our most vulnerable. You can argue for or against Gilden’s approach with validity, debating ethical points and the preservation of our personal space. But, at the end of the day, it all really comes down to the image doesn’t it? If you enjoy Gilden’s images, especially his close-up street work, you’re guilty by association. If you don’t like the way in which he gets his shots, but yet you enjoy the image… even for a split second… you’re an accomplice. 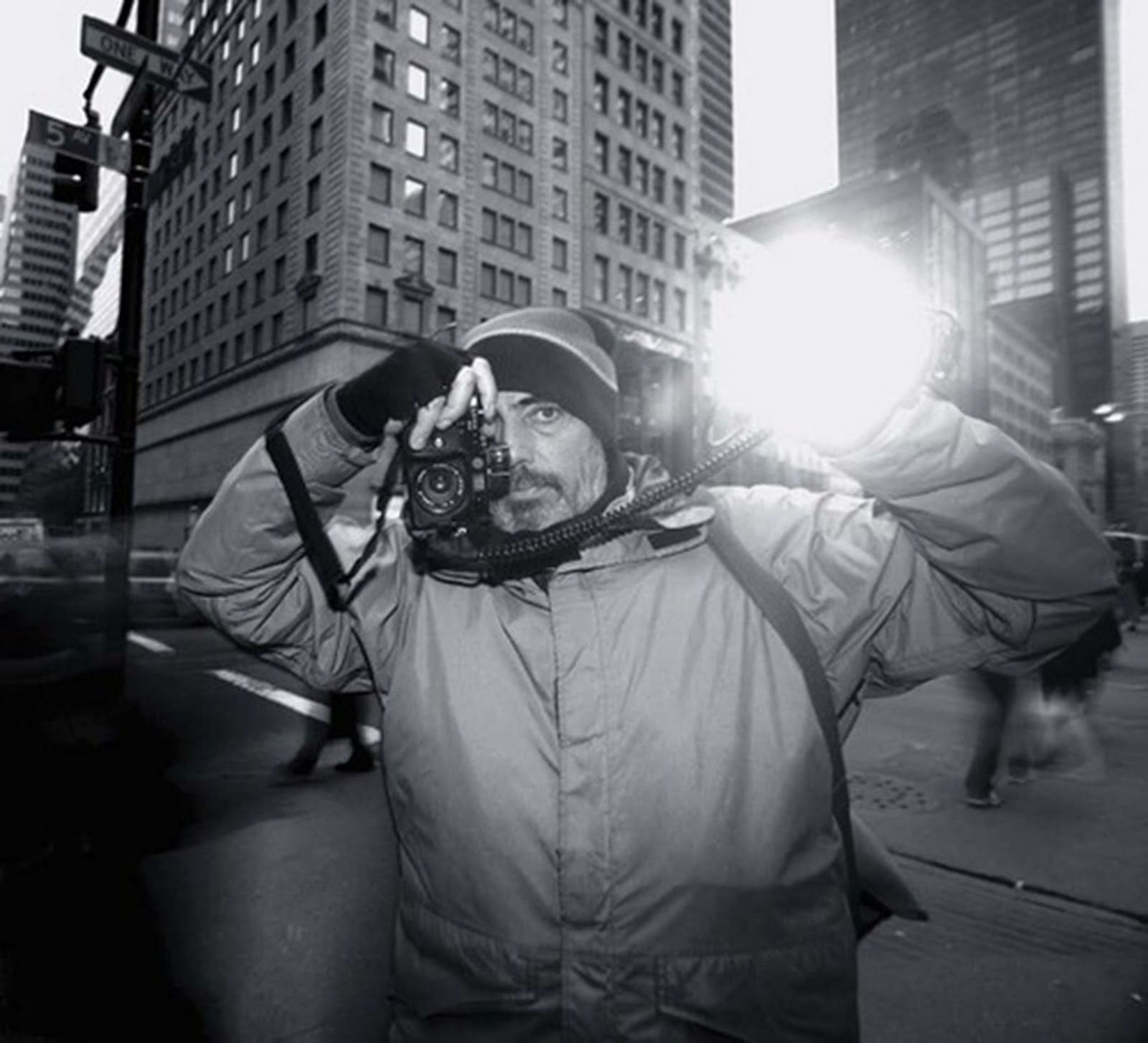 That being said, I truly enjoy Bruce Gilden’s work. After sinking my teeth into his images, I became hungry for more. They were intense and alive. The flash, for me, pushed the characters onto a stage in the theater of my mind. And the faces! Such glorious faces! But, I found myself asking “could I work like that”? I couldn’t and still can’t answer that question. It’s almost like a “do unto others” quandary. Would I want someone jumping into my space, firing a flash and snapping my mug? But also I wondered, is being sneaky any different? And isn’t it more cowardly at that? The very fact that Gilden’s work makes me ask such questions is proof that his is some most powerful stuff. But as a consumer, a glutton for photography, sometimes it’s best not to ask and just dig in and enjoy. Let the taste sink in.

With all apologies to vegetarians and vegans, I’ll let you chew on this: Bruce Gilden is the photographic equivalent of a master butcher. He does the dirty work and we enjoy the meat. Most of us don’t have the stomach to work the way he does, but we enjoy what he eventually brings to the table. And his cuts, his images… are prime. The one thing that really makes it mark: get closer.

Yes, Gilden’s work pushes me to get closer. Why? For me, that’s easy… the face. That’s where the money is. That’s so much that can be captured in a single face. Expression, detail, beauty, emotion. There’s so many stories that can be told from a photo, and there can be hundreds from a single face. Getting close can set a different stage than a grand, wide shot. Or a shot from the back, or from the side. It tells different stories than a shot of the hands or feet can tell. It also tells a truly unique and personal story. A close shot of the face tells our story.

I don’t know if I could ever work like Bruce Gilden does. But I shouldn’t really want to. As photographers, I think it’s best to be ourselves and to birth our own style from our individual creative identities. But there’s nothing wrong with implementing influences. As artists, influence is at our core. Influence and inspiration drive us and help shape us. Gilden’s powerful style definitely pushed me to get closer and to see what stages I can build for a lifetime of storytelling.