I must admit, since I wrote my Under The Influence on Mark Cohen back in September, I’ve become even more intrigued, perhaps obsessed, with the photographer and his work. The images found online were just simply not enough. I knew his retrospective, Frame, was coming soon, so I resisted purchasing his highly-acclaimed Dark Knees. My thinking was this… Frame was a retrospective and obtaining it would be the best way to satiate my hunger for more of Cohen’s work.

It was, without doubt, worth the wait.

With Frame, Mark Cohen’s images get the sophisticated repository they deserve. Published by The University of Texas Press, the 304-page retrospective is, simply put, luxurious. Underneath the slipcover is a gorgeous black cloth hardbound cover that has an inlay of Cohen’s One Red Glove photograph. Inside, between the striking red linen end pages, are 250 images. According to the publisher, about 100 of them have never been published… a most special treat. At a very comfortable 9 1/2 inches by 10 1/2 inches, Frame is a pleasure to hold and gives the photographs, which each get their own page, ample space. 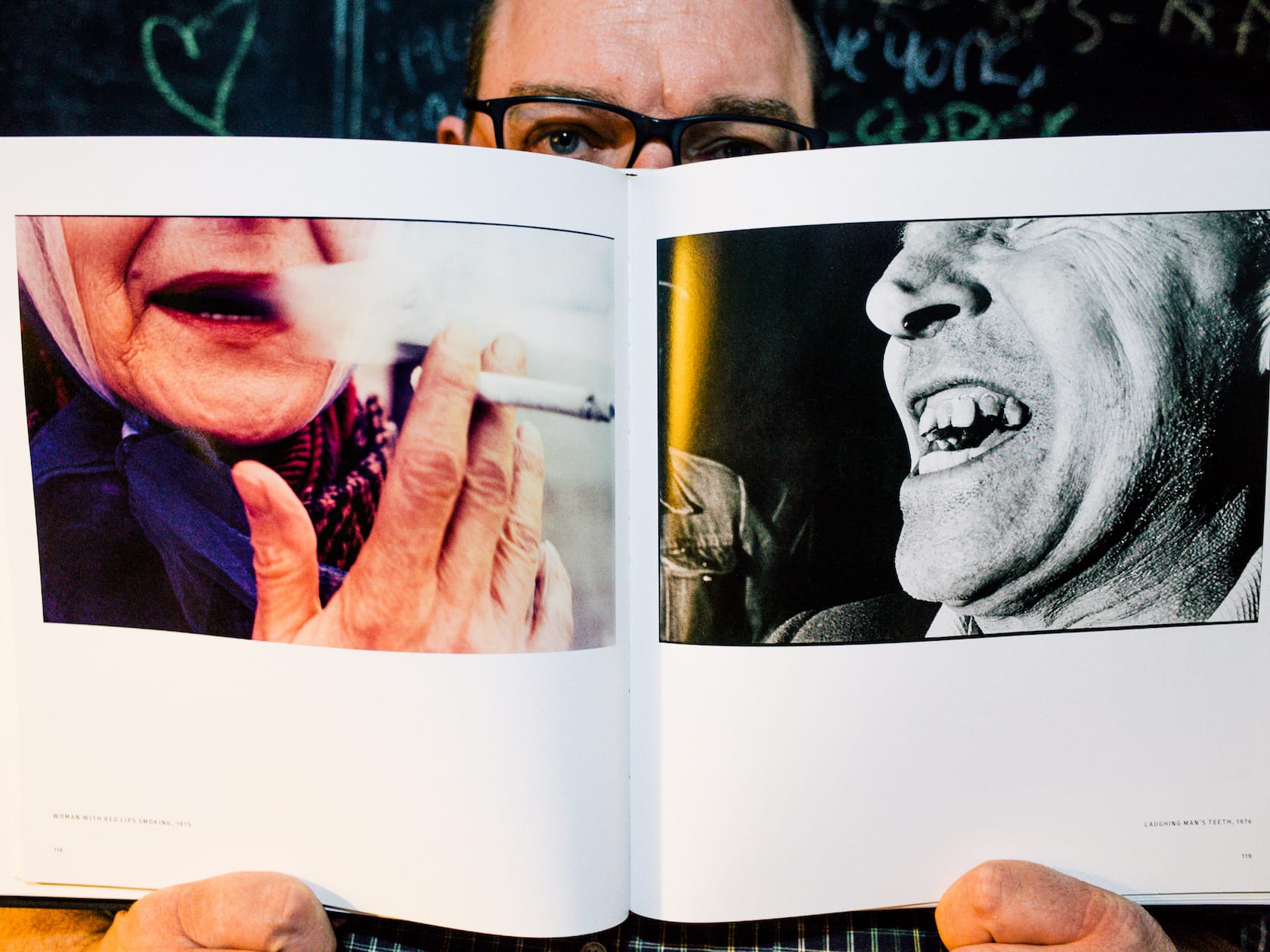 The fancy clothes make Frame special, but the images are what we’re here for and with those, the book delivers. What’s even better, the book surprises. After the first session with Frame, I came away shocked at how little I knew about Cohen’s body of work and amazed at how great this living legend is.

The Mark Cohen that I had become familiar with is represented in abundance in Frame. That photographer is the one known for use of flash. For working close. For capturing fragments of bodies… limbs, torsos. Bits of expression. The popular sample of images found online represent this Cohen, who has labeled himself a “surrealist action photographer.”

Cohen may be best-known for living up to the moniker above, but Frame is an honest retrospective and it is proof that Cohen is more than that. He’s not just a “surrealist action photographer”. The book proves that Cohen is a photographer, and a master one at that. 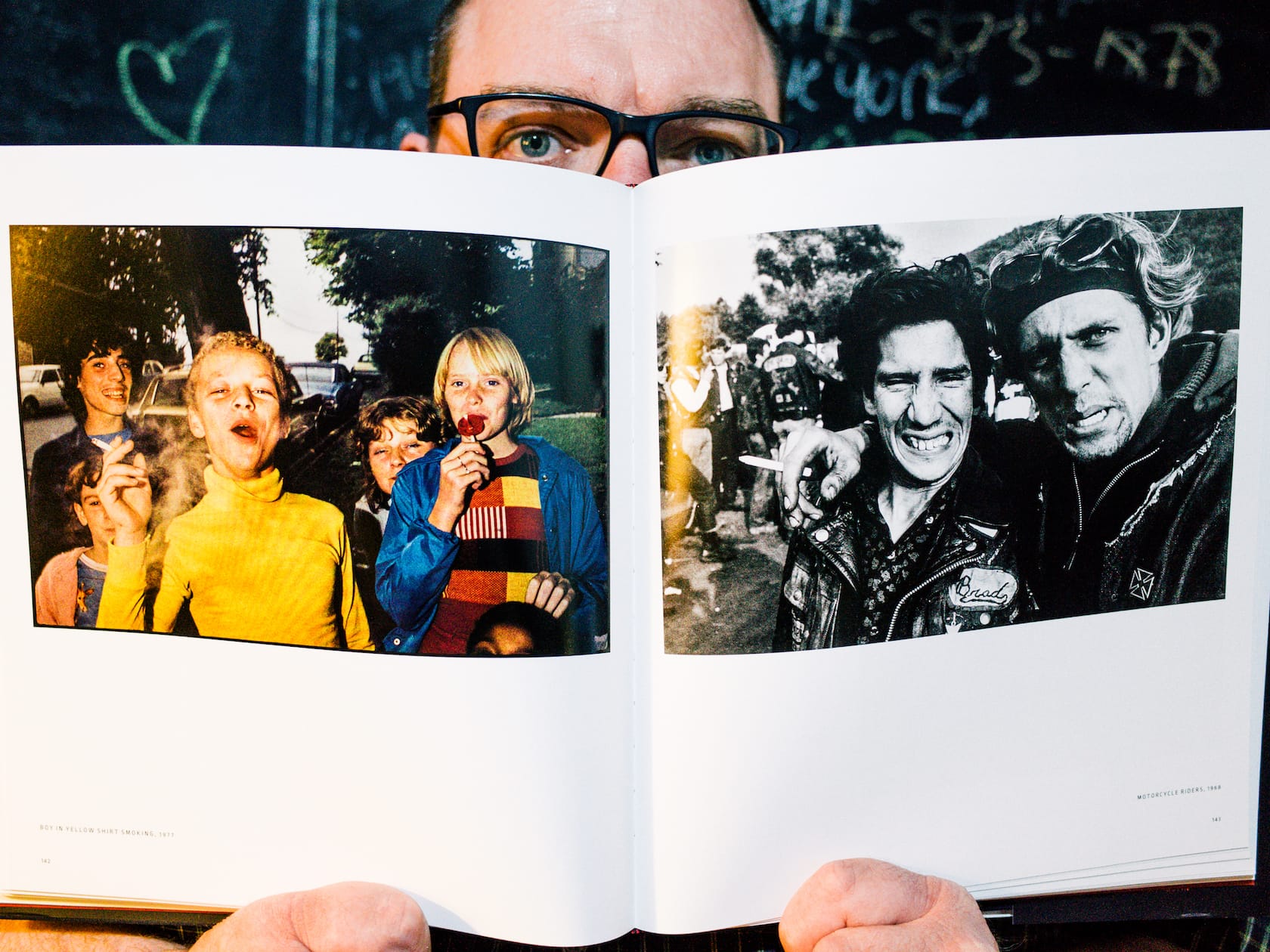 Amongst Cohen’s surrealist work is more straight photography. Sharp images like Waiting In Landscape, Mexico, 1981(pg. 63). This is a lovely monochrome image from an apparent desolate town in Mexico that is reminiscent of some of the classic Farm Security Administration photographers’ work. Another image, Women On Road, Pail, Mexico, 1981(pg. 87) is also reminiscent of that work. Interestingly enough, Cohen, who sequenced the images himself, places this image opposite another more blurry, surrealistic image taken more recently in Mexico. Cohen plays with juxtapositions in sequencing at various points in the book and this adds to the very personal feel of Frame. The images, each dated, are not in any chronological order. In fact, the points where the sequencing or juxtapositions seem odd… price to be even more compelling. They beg the question, “what was Cohen thinking?”. These moments make the reader want to crawl inside the photographer’s head. Find out what makes him tick. 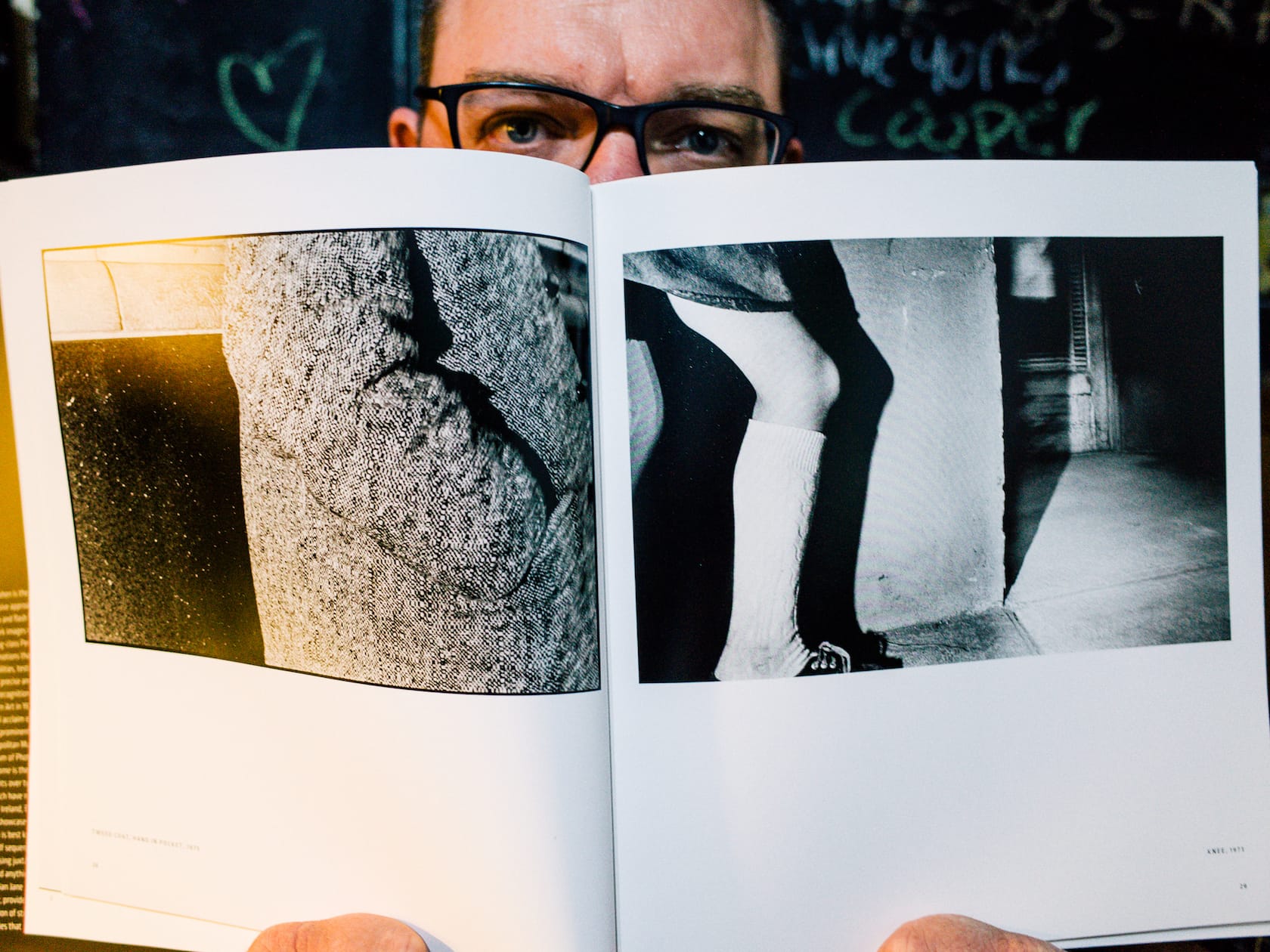 Thankfully, the beautifully written introduction from Jane Livingston helps to give us insight into Cohen and his methods. Some introductions written for photo books seem like an afterthought, but that is not the case here. The eloquent examination penned by Livingston, a respected curator and author, is vital to the Frame experience. It’s biographical, analytical, and prepares the reader for what their eyes are about to take in… especially helpful for those who aren’t that familiar with Cohen’s work. Also, the text is eye-opening for a reader like myself… someone who thought they knew what Cohen’s work was all about. 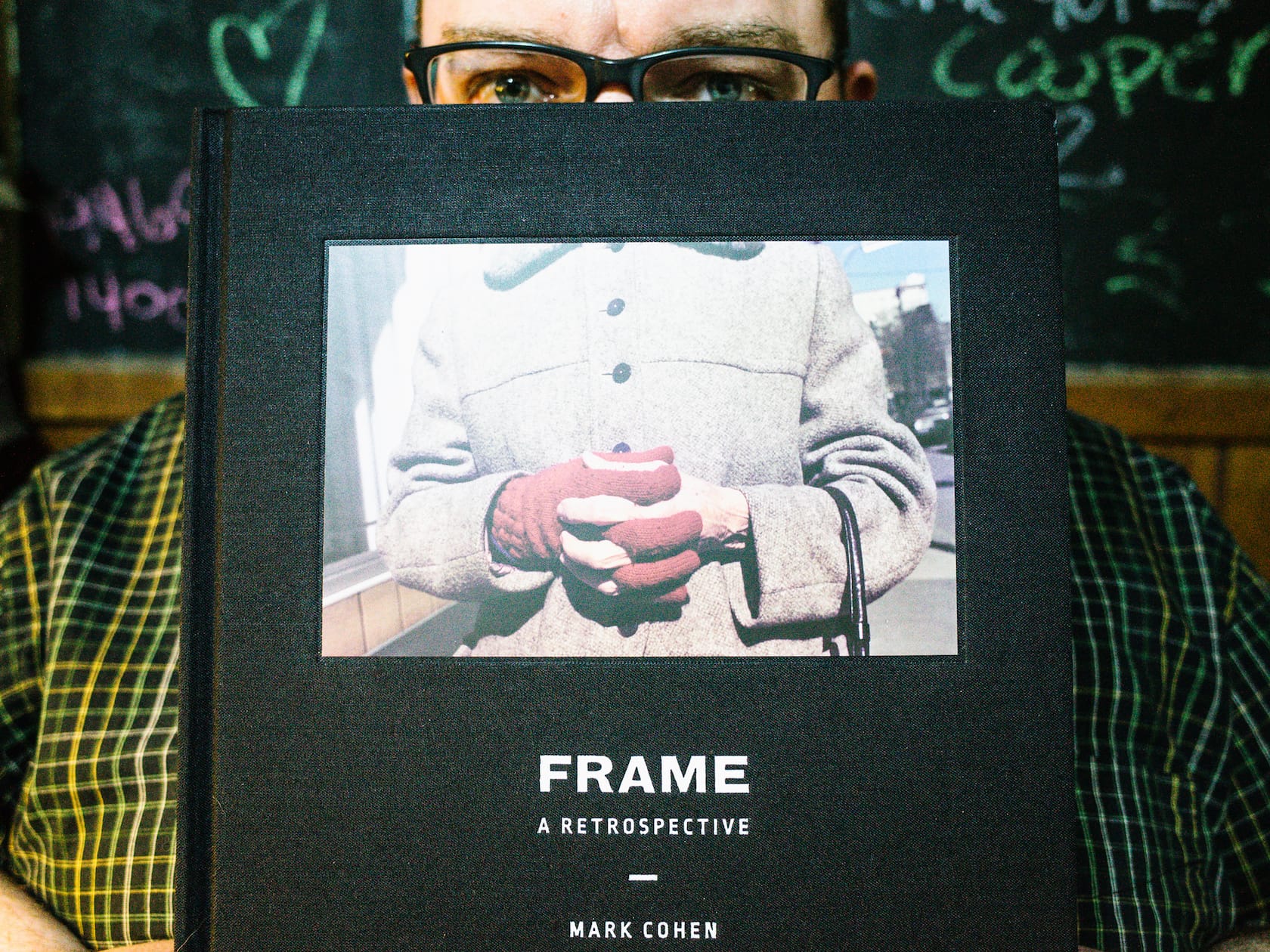 But street photography is how I found Cohen and Frame has plenty of the legend’s work in that genre. Both his vivid color and striking monochrome work are represented here and they both look magnificent on the rich paper. The classics I’ve seen before are all here. Bubblegum. Boy In Yellow Shirt Smoking. Laughing Man’s Teeth. Flashed Boy In Blue Jacket With Six Shooter. It’s delightful to see these images on paper instead of a computer screen. And the street photographs I haven’t seen… they’re equally wonderful. Woman With Pigeons and Man On Hill With Key are two exquisite monochrome shots that were new to me and stand up on the level with the classics. Family Walking and Two Boys And Open Car are two color photographs, both from 1977, that strike a fond, reminiscent chord with this reader. Another surprise I found within Frame were the locations where some of the new-to-me images were shot. Mark Cohen was known for producing work from his small, hometown city of Wilkes-Barre, Pennsylvania. This backstory, in fact, made Cohen’s work all the more intriguing. But Cohen, on occasion, shot elsewhere. In Frame, there’s images from France, Ireland, Spain and Mexico. Another most welcome surprise. 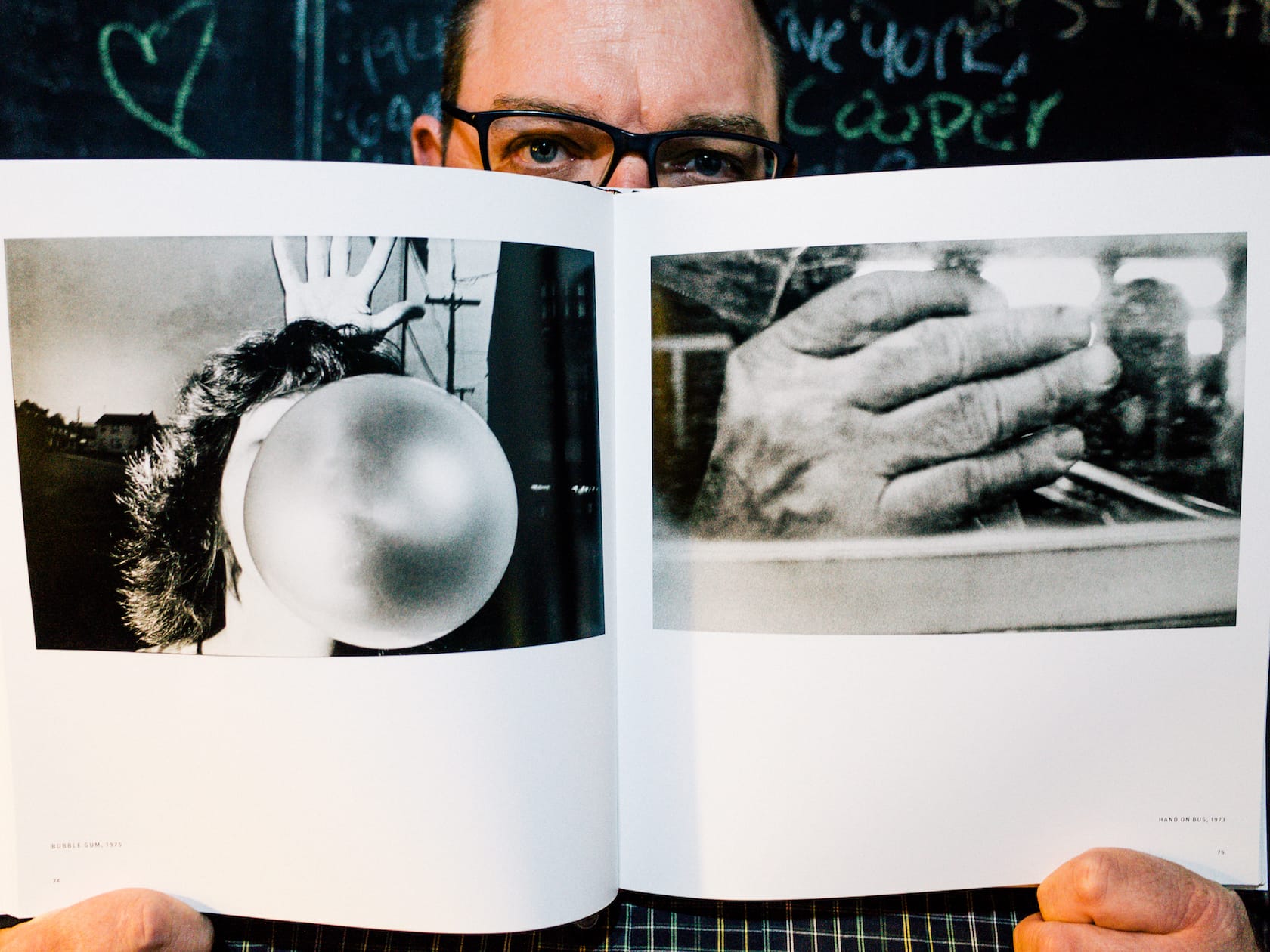 Actually, that too, also makes Frame great. Each time I open it, I seem to discover something new. A small detail in an image. Or maybe it’s a feeling stirred by a photograph. A connection. A moment where I think I know what Cohen was thinking when he clicked the shutter. Frame is more than eye-candy. It’s a well of inspiration for a photographer.

At $85 USD, Frame is no small investment, but it is oh, so worth it. It is sincerely testament to Cohen’s greatness as a photographer and as an artist, and make no mistake… Cohen is an artist as much as he is a photographer.. The design of the volume and the selection of images is exemplary. For me, it has set the bar from which retrospectives will be judged from this point on.