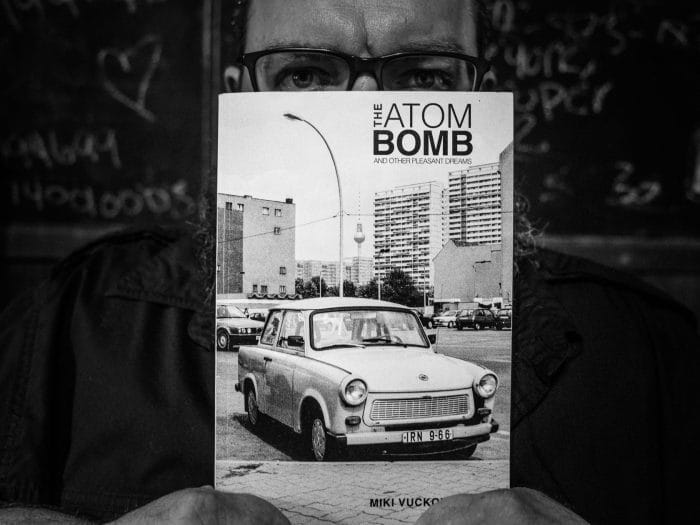 Skateboarding and street photography are not strange bedfellows. There’s the obvious connection with the street. Both skaters and street photographers grind it out on the pavement and asphalt. Skateboarders looking to land the trick, and the street photographer looking to land the shot. But that’s not where the similarity ends. Skateboarders, current and former, have shot some fantastic street work. Ed Templeton is a prime example. His book, Wayward Cognitions was reviewed here on Streethunters.net. Gabe Angemi is another example, with zines under his belt and an incredible Instagram feed. Then there’s those photographers who shoot skateboarding and also shoot street. The ones who shoot the action for skateboarding magazines and websites, but also shoot street. Miki Vuckovich is a prime example of this kind of shooter and he’s damn good at it. 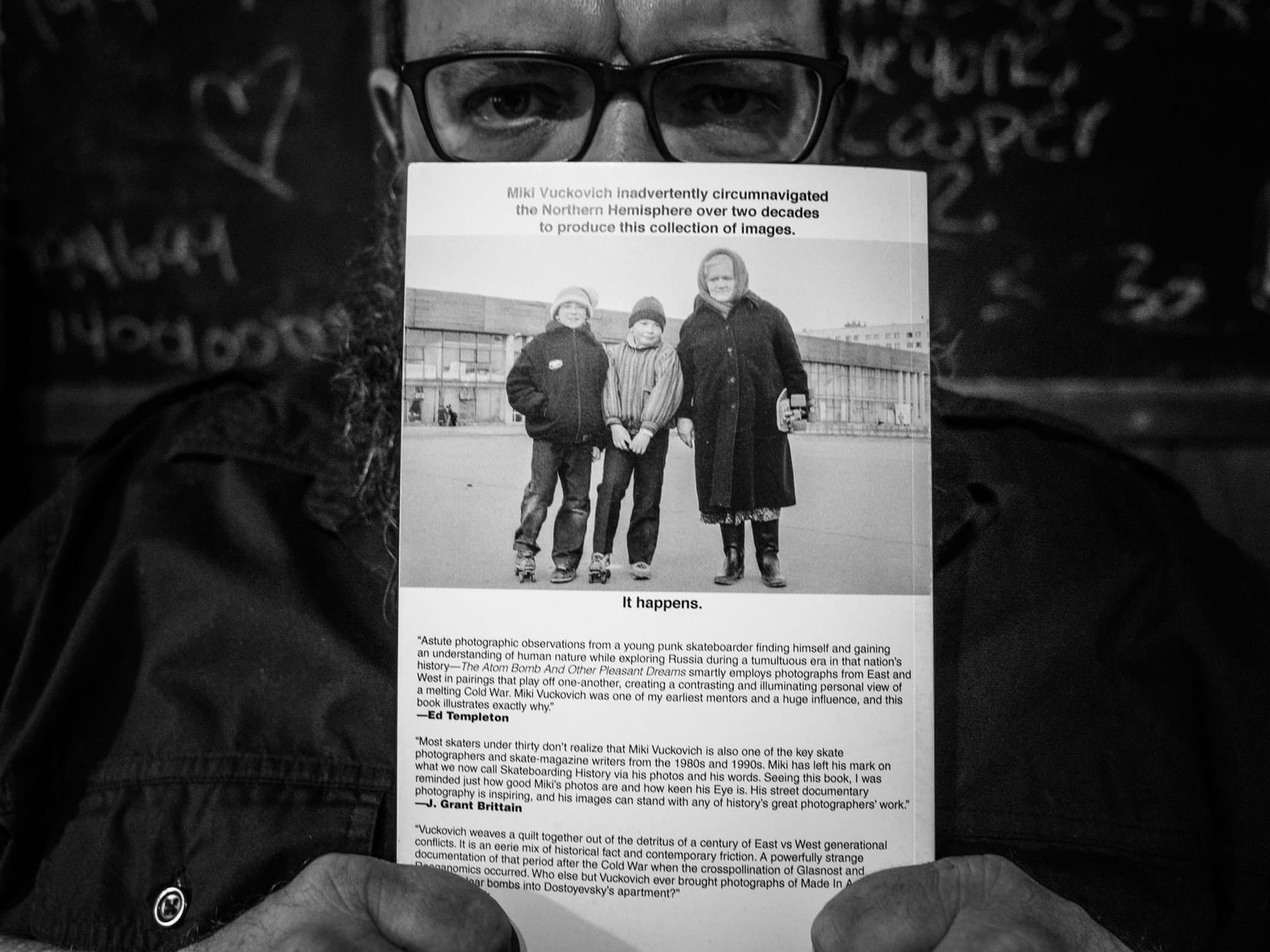 Miki Vuckovich’s name may not be dropped often in street photography communities, but with the publication of his book, ‘The Atom Bomb And Other Pleasant Dreams’ (Move Elore, 2016) that should deservedly change. Make no mistake, though… Vuckovich already has well-established street cred, albeit in the skateboarding world. Vuckovich is currently the Executive Director for The Tony Hawk Foundation, an organization whose mission is, “to help young people by issuing grants to low-income communities building quality public skateparks, and providing guidance to city officials, parents, and children through the process”. Since 2002, the foundation has awarded over $5.5-million to 569 public skatepark projects in all 50 States, and $100,000 to support the Skateistan program in Afghanistan, Cambodia, and South Africa. Vuckovich is indeed a statesman in the skateboarding world, being involved with the sport for over thirty years. And within that span, he spent a lot of time behind the lens. 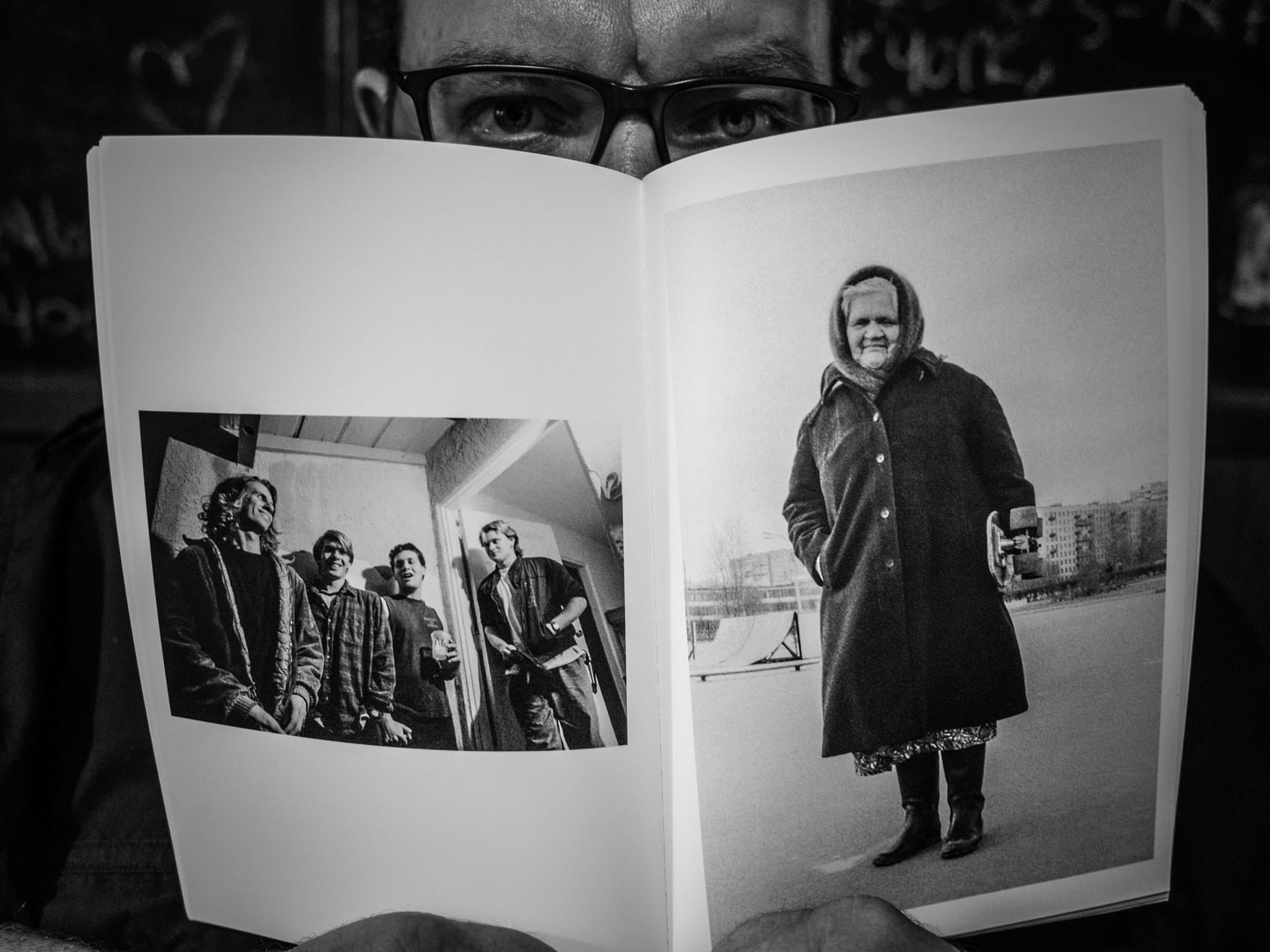 Vuckovuch, I imagine, has amassed a wealth of images with his globe-trotting. A skilled photographer, which Vuckovich most definitely is, who had the money or the backing, could pare down and sequence the work from all the world into a nice compilation of images. And in his case, follow the common thread of skateboarding for a unifying theme. A logical choice. I’m not saying, by any means, that this would be an easy task, but it’s the path that makes sense. It would be the project that is expected.

But for ‘The Atom Bomb’, a book debut for both Vuckovich and Move Elore, a more ambitious path was chosen and the journey’s completion can only be called a most satisfying success.

So what makes ‘The Atom Bomb’ more than a collection of street shots from various locations? Before I answer that, let’s get into a little history. If you’re getting a little longer in the tooth like me, you remember The Cold War. If your don’t, I’ll cite Wikipedia’s brief but accurate description… “The Cold War was a state of political and military tension after World War II between powers in the Western Bloc (the United States, its NATO allies and others) and powers in the Eastern Bloc (the Soviet Union and its satellite states).” During this war, which lasted until the fall of the Soviet Union in 1991, I remember being fearful of nuclear war. As a child/teenager, it seemed like we were always on the brink. The news and even pop culture didn’t help. Movies like War Games and Red Dawn only cemented the thinking that war with the Soviet Union was inevitable and atomic annihilation was very, very possible. It was a strange and frightening time to grow up in the United States, and in those pre world wide web days, we didn’t know if kids our age felt the same. What I do remember clearly was the us versus them mentality seemed to be a common denominator amongst the citizenry I knew. Democracy versus communism. West versus East. 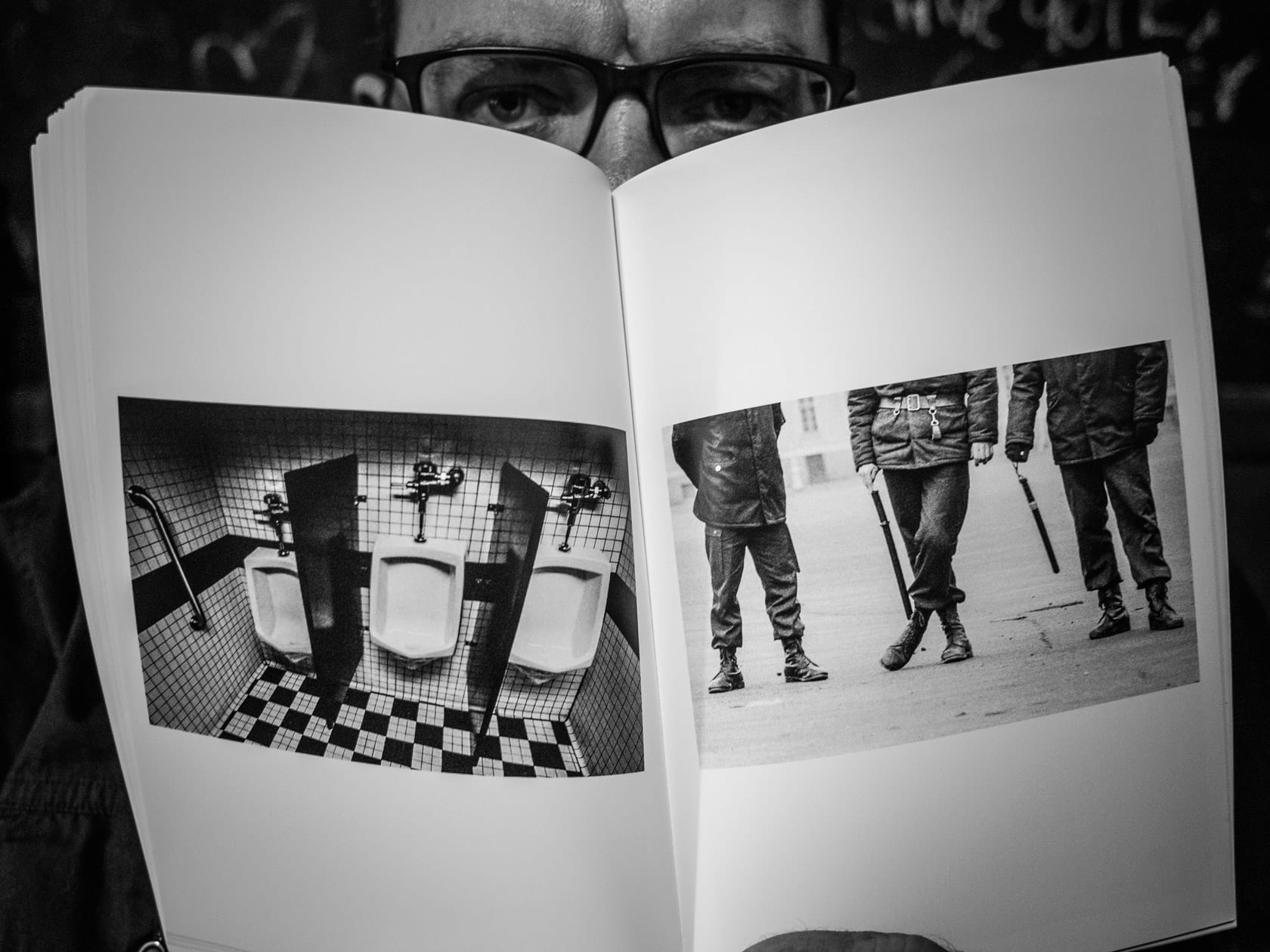 With the self-penned introduction to ‘The Atom Bomb And Other Pleasant Dreams’, Miki Vuckovich reflects a stunningly similar childhood and I felt immediately connected to this 6” x 9” softcover. The pages following pushed me further down memory lane as a Cold War kid. The all-monochrome images are split across the spreads, with photographs from the Western Bloc on the left side and shots from the Eastern Bloc on the right. Very, very clever and a layout execution that sets the book apart. This concept is more than a slick shtick utilized as a marketing tool. It’s a thoughtful editorial call. One that ultimately educates and invites empathy.

As mentioned previously, Vuckovich may be primarily known for his skate photography work, but ‘The Atom Bomb’ proves he’s an equally deft street documenter who has a keen eye for geometry and architecture as well. Vuckovich has more than an eye for “the decisive moment”… he has a true sense of place. That sense of place is a major factor in making ‘The Atom Bomb’ more than a catalog. It makes the book an experience. Perhaps Vuckovich’s full range of vision can be attributed to his roots in skateboarding culture and punk rock, where experimentation and open-mindedness are welcomed and encouraged? Regardless, his eyes have been wide open and his shutter reflex has been on point. 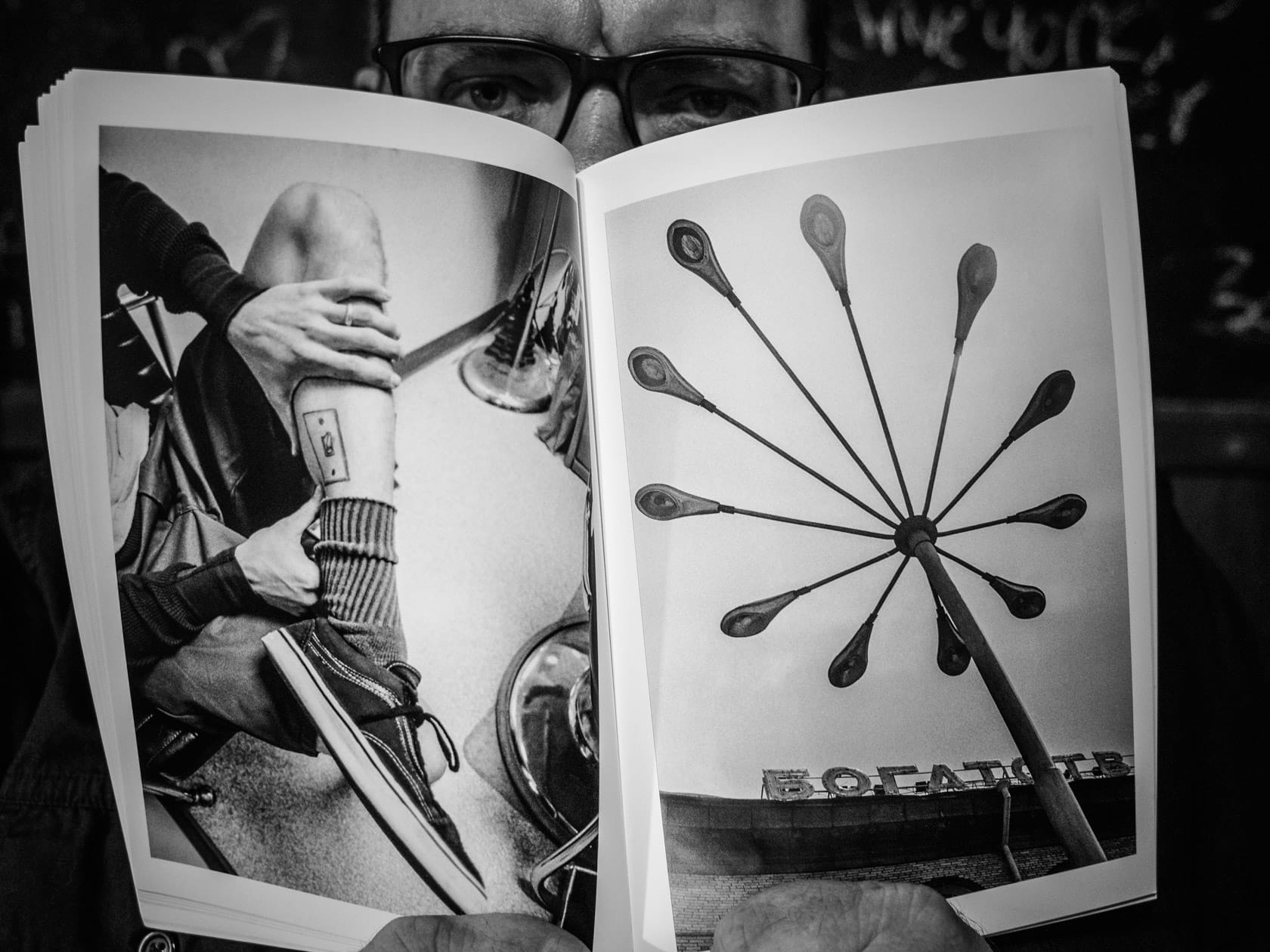 There are no absurd, over-the-top moments captured in ‘The Atom Bomb’, with the exception of the occasional American thermonuclear bomb here, and the Russian MIG fighter (with children playing on it, no less) there, but the captures are very slice-of-life. But, that is not a knock on the book or Vuckovich’s skill at all. In fact, that’s what makes the book enjoyable and enriching.

Skateboarders caught in the act from both blocs. Architecture from both sides of the wall. Vehicles from the West and The East. Cadets putting on gas masks in California. Children diving for starfish in Vladivostok. The crowd in the stands of an American football game. Demonstrators in Saint Petersburg. Everyday life in the East and the West, but all beautifully captured in monochrome by Vuckovich. With this “ordinary” beauty, the line in the East/West theme becomes blurred. The East gets closer. 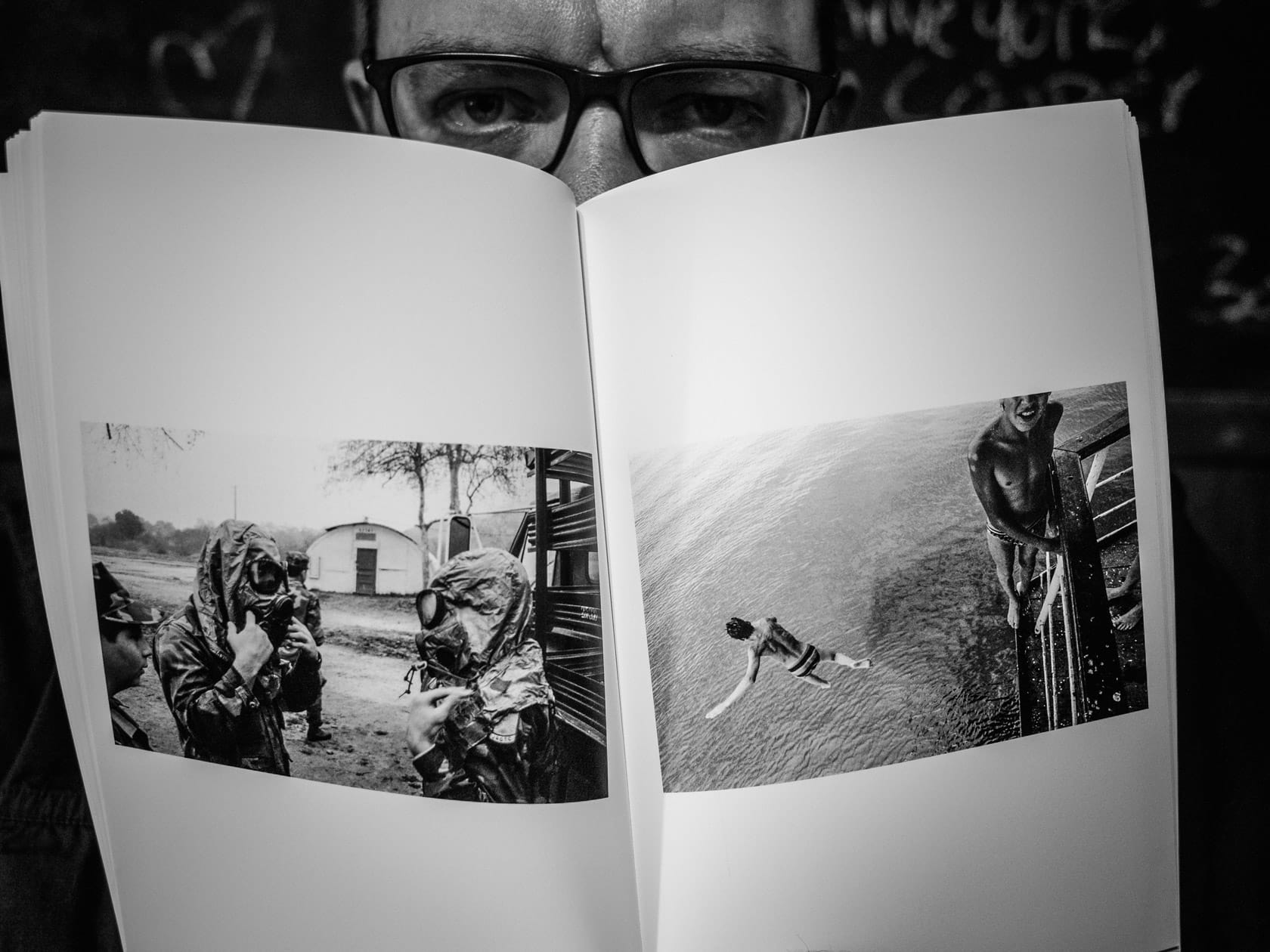 That’s not to say Vuckovich doesn’t cleverly play the contrast with the individual East/West spread. The aforementioned American football crowd worked against an opposing image of spectators in Saint Petersburg is the prime example. But all this cleverness wouldn’t mean squat if Vuckovich didn’t have the chops as a photographer. And chops he has. The concept of ‘The Atom Bomb’ is built on and enhanced by Vuckovich’s talent and versatility. His style of street is classic by nature. Images of pier divers, the elderly Russian woman holding a skateboard and a child looking back while riding a bike bring to mind masters of street photography. Other images have a more modern, artistic feel. And others, like “Fred Conrad” and “Portion” have a later, more artistic feel. The images without people are more than filler. Strong compositions make pictures of subjects like streetlights, bicycles and cars stand firm amongst the photographs with people present. Everything works, and most importantly… everything works together.

At the end of ‘The Atom Bomb And Other Pleasant Dreams’ is a delightful section of thumbnail images of all the photographs with titles, dates and brief descriptions. Some argue that images should stand on their own, without description. That doesn’t play here. The usage here is perfect. Informative and witty, with dates and the type of film of used, the inclusion of these descriptive thumbnails makes the book feel truly complete. With this, Vuckovich has basically given us all there is to give for the sake of this project and almost forces the reader to revisit the full-sized images again. Yet somehow, with some of the images, there’s still room for our own interpretations. A fabulous finishing touch.

After each read, I leave ‘The Atom Bomb’ feeling nostalgic, satisfied and yet still inquisitive. How did the kids over there feel during The Cold War? Were they scared? Did they know we were perilously close to nuclear war? But one question that was answered after the first read was, does it even matter? Do these photographs matter? That answer is yes, yes they do matter. It matters in that, like Vuckovich says in his introduction, we are all the same. That we’re all capable of seeing the beauty in the world, and that hopefully, we can rely on that saving all our asses and prevent history from repeating itself. These images are important from a historical standpoint and thankfully there was someone as talented as Miki Vuckovich to capture them. 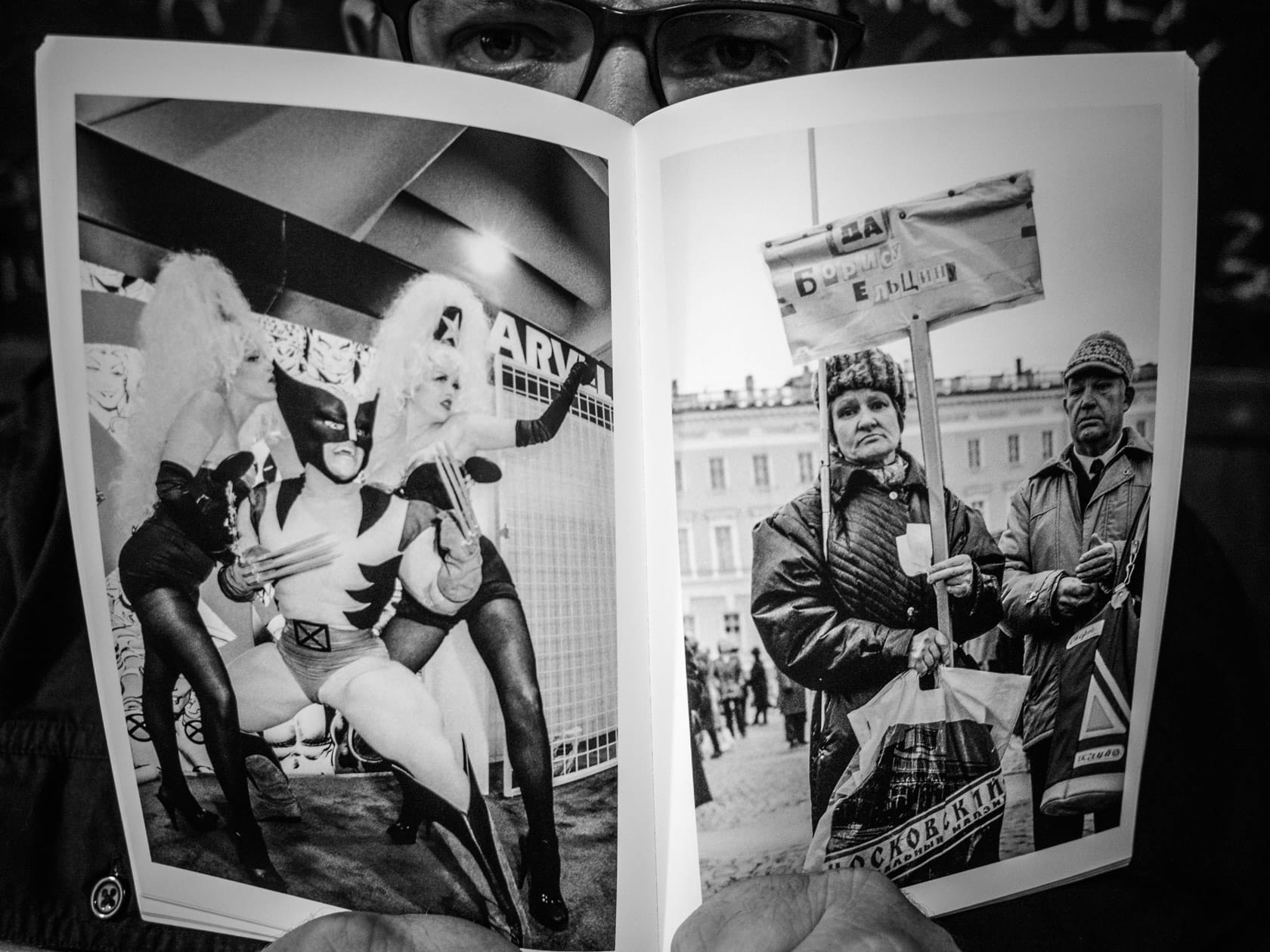