Norwich is the city where I was born, and despite having never actually lived there, it’s a place where I’ve spent a great deal of my time over the years as I went to school and university there. As the town where I have lived all my life is quite small and Norwich has a population of over 200,000, it is on the urban streets here that I learnt how to be a street photographer. Norwich is the capital of Norfolk, and is located in the heart of East Anglia, in the ‘hump’ that protrudes to England’s South East. It is a fantastically historic city, and the city centre is home to a truly remarkable number of brilliantly preserved mediaeval buildings, which form an interesting architectural backdrop to photos. The most distinctive of these are the beautiful Norman Cathedral (which has the second highest spire in England), and the Norman Castle, located right in the city centre. Norwich is a very popular shopping destination which means there are always people on the streets, and it has a strong cultural identity and nightlife too owing to the two universities based in the city. 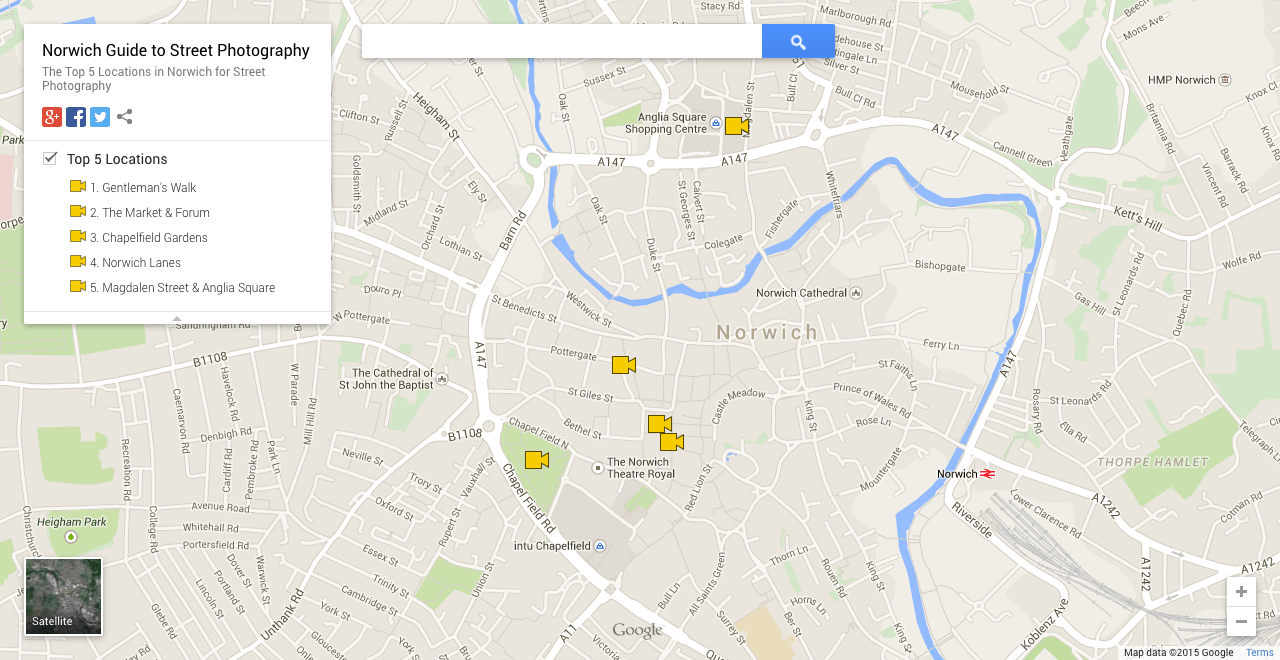 Norwich isn’t a huge city by British standards, and owing to its location in the predominantly countryside region of East Anglia (where transport links aren’t terribly fast) it isn’t as incredibly well known or popular as other historic English cities like Bristol and Bath. Norwich is however MY city, and it is a place of which I am inordinately fond and will always hold very close to my heart, and somewhere I wholeheartedly recommend for a visit as it is a bit of a ‘hidden gem’

Norwich’s city centre is usefully compact, and my top street photography locations should reflect this. They are by no means a totally exhaustive list, nor are they all must-see postcard-pretty tourist spots. But they are all places that truly inspire me, and which I feel help to offer an interesting and varied glimpse into modern British city life.

Slap bang in the middle of Norwich is Gentleman’s Walk – a pedestrianised street that forms the backbone of the city’s retail centre. A stroll along Gentleman’s Walk will give you access to virtually any of the most important parts of Norwich. From here you can reach both of Norwich’s shopping malls, the city castle, its independent department store Jarrolds, and the market (more on which later). The street is also lined with shops and cafes, and as a result is absolutely teeming with people and activity, particularly on a Saturday morning, making it a perfect spot for street photography if you like to throw yourself in at the deep end and be in amongst the action. As well as shoppers as a point of interest, on busy days there will also often be buskers, street artists and performers dotted along the street, adding lots of colour and excitement to the city scene for a photographer. 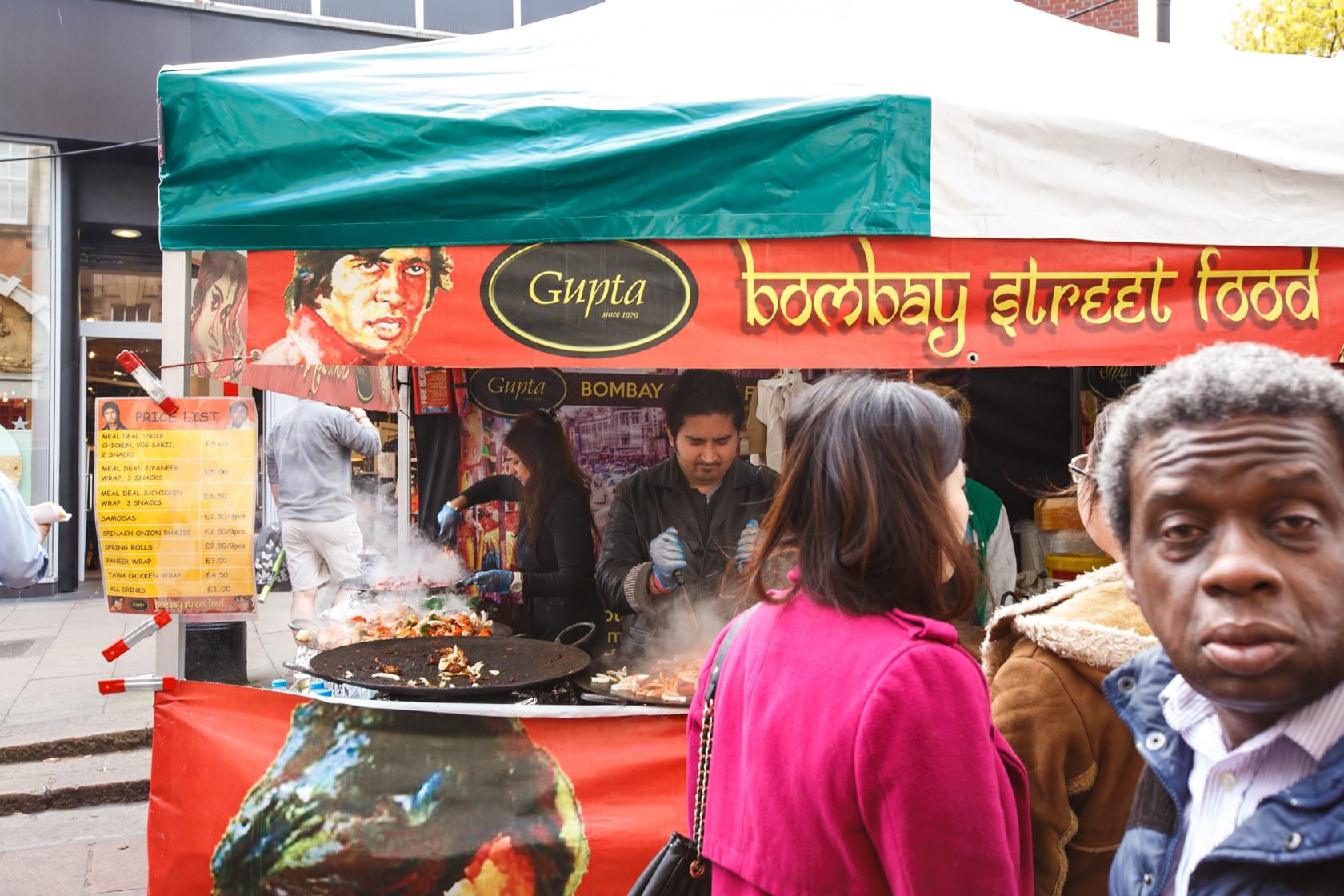 Hot tip: If you’re lucky enough to be in Norwich over the Easter Weekend you’ll find Gentleman’s Walk a total delight. The whole street is taken over by a ‘world’ market, with traders travelling from all over Britain and the world to set up stalls selling a huge range of exciting foods, as well as jewellery and trinkets. So grab a camera and get in close, and shoot in colour to soak up all the exotic colours and smells!

The Market and Forum

Spanning a third of one side of Gentleman’s Walk is Norwich market, which is one of the largest permanent covered markets in the whole of Britain. Renovated in 2006, the stylised market stalls with their brightly coloured awnings form a brilliantly archetypal backdrop for a ‘market’ streetshot, and some of the stalls really lend themselves to being photographed. The greengrocers stall is a particular highlight, as is the florists, and the vacuum cleaner spare parts stall makes for a brilliantly wacky shot. There are several cafes too which often attract some interesting and dynamic characters – they make great subjects for street portraits! Just above the market is the Norwich Forum, a spectacular modern building housing the city library. The steps outside the Forum are a very popular meeting spot and are often packed with people at the weekend – take some shots here with the sweeping curved glass frontage of the Forum providing an interesting (and highly reflective) backdrop. The space in front of the Forum steps is regularly used for events too, so make sure to keep a look out for something interesting going on. 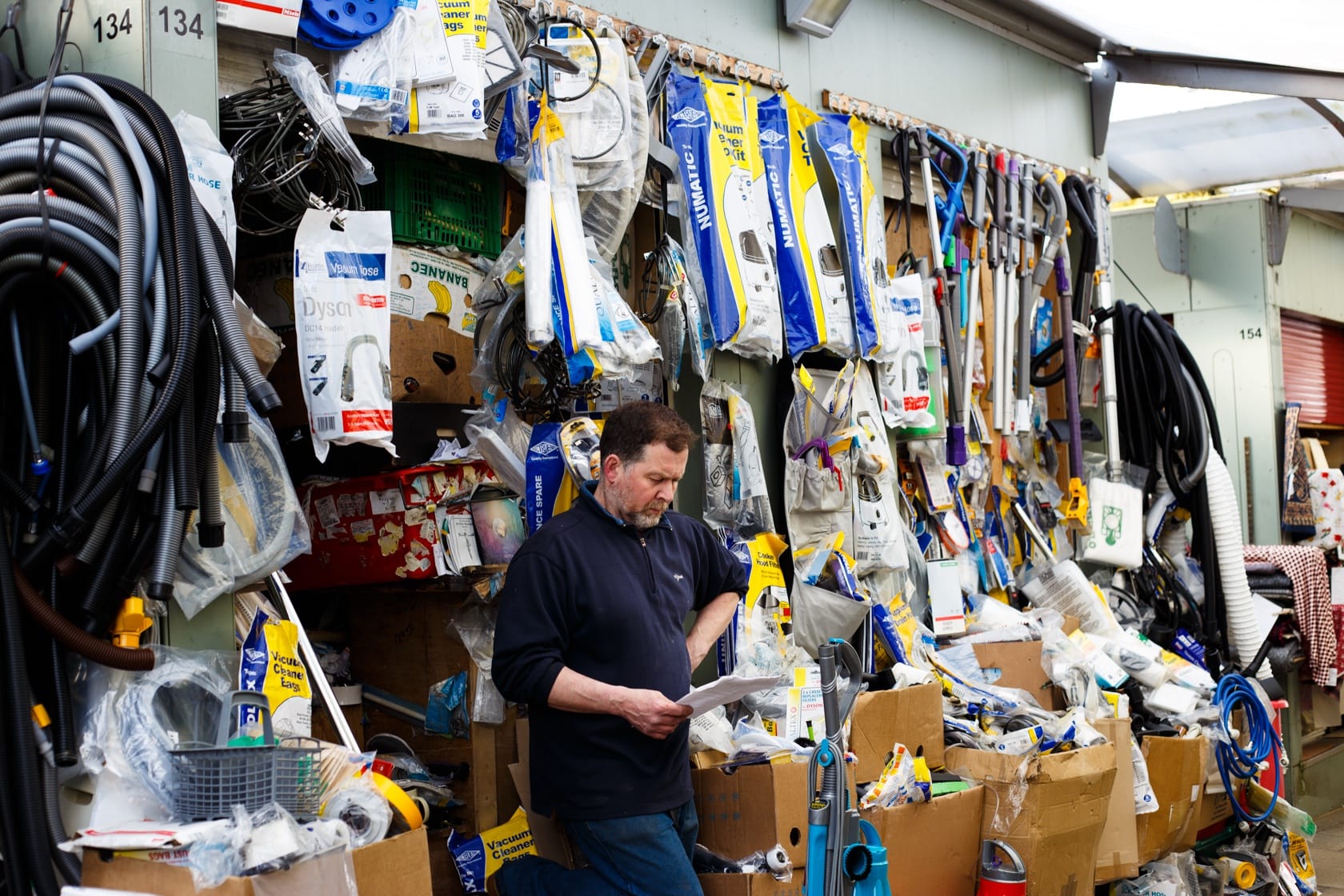 Hot tip: If possible, pack a wide angle lens (maybe even one with a zoom) when shooting the market. The market is laid out geometrically, but the alleyways can be quite tight, and a wide angle can be useful in fitting in a whole vista of a stall. Keep the lens on for the Forum, when you can great some great shots from a low angle of the sweeping curves of the building. I prefer a 16-35 for this.

Two minutes from the Forum are Chapelfield Gardens, a park space right in the centre of the city. You’ll often find an event of some kind going on here, and maybe even a live band performance in the octagonal bandstand. As Chapelfield Gardens lies on one of the main routes from the city centre to the outskirts and Norwich’s ‘Golden Triangle’ area of residential accommodation you’ll often find it busy with people passing to and fro, so it’s a great place for some walking action street shots if you haven’t had any other street shot opportunities that day. 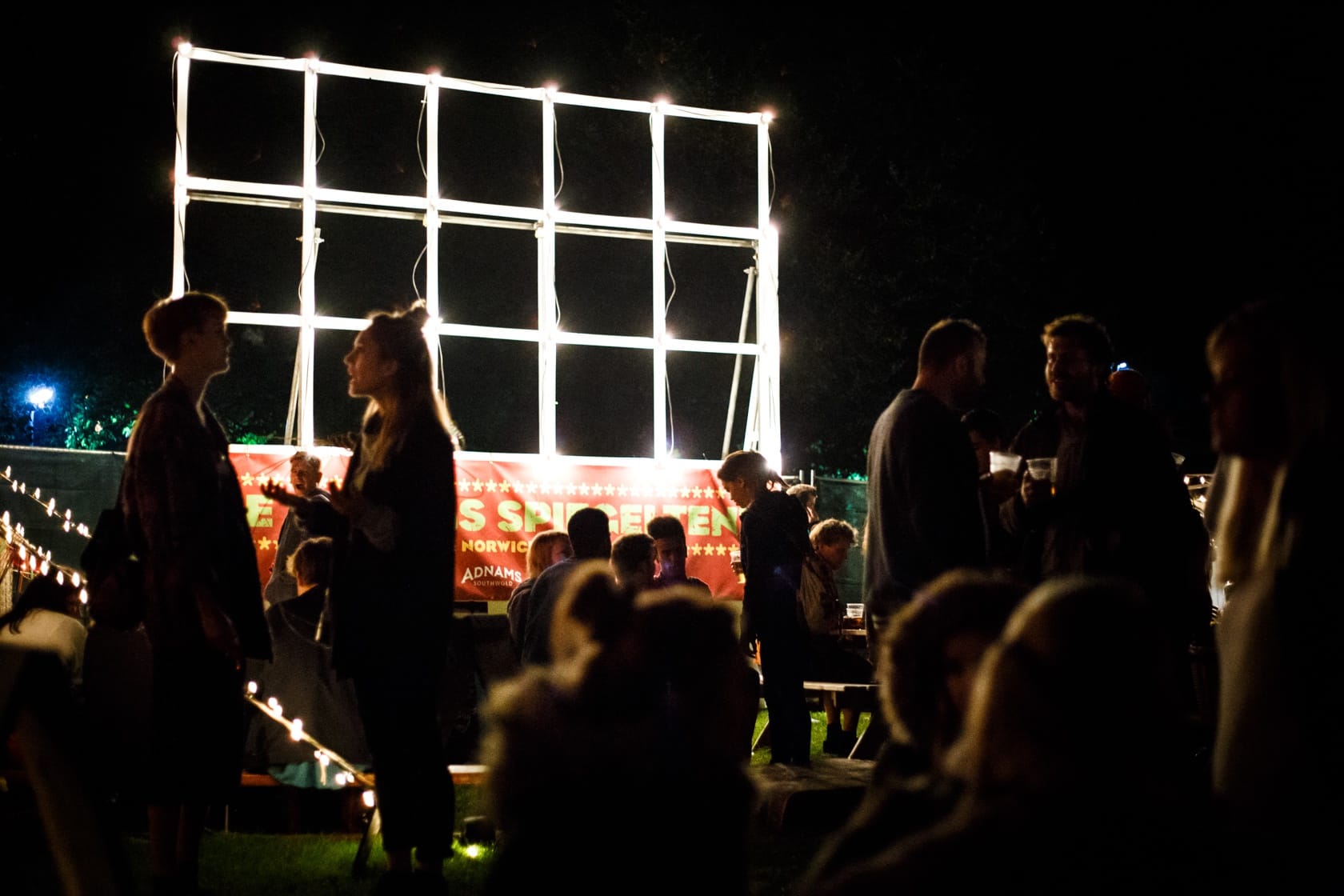 Hot tip: Chapelfield gardens is at its best during the summer – it’s absolutely teeming with people playing football, walking dogs, or just relaxing on the grass. In the summer you also stand the most likely chance of catching an event and these are always great to photograph. Around May time is the Norfolk and Norwich Festival and in years gone by Chapelfield Gardens have hosted a tent with late night music. July sees the Norwich Lord Mayor’s celebration – more tents, as well as food and beer!

Fantastic Norwich street photography opportunities can be found in an area of the city’s streets dubbed “The Lanes”. Located to the south of the River Wensum, and bordered by the city hall and castle, the lanes are a series of winding and interconnecting historic streets, which are largely pedestrianised. The Lanes are home to some of Norwich’s most interesting and quirky independent shops, cafes, and restaurants and some of the window displays here make for really interesting features in your street photos. There are lots of interesting small graffiti tags and stickers dotted about here too – many of them political in nature, which makes for an interesting contemporary reference point for your shots. You can capture a street shot here and look back on it in several years time and see a piece of graffiti which referenced an important event at the time you shot the photo. 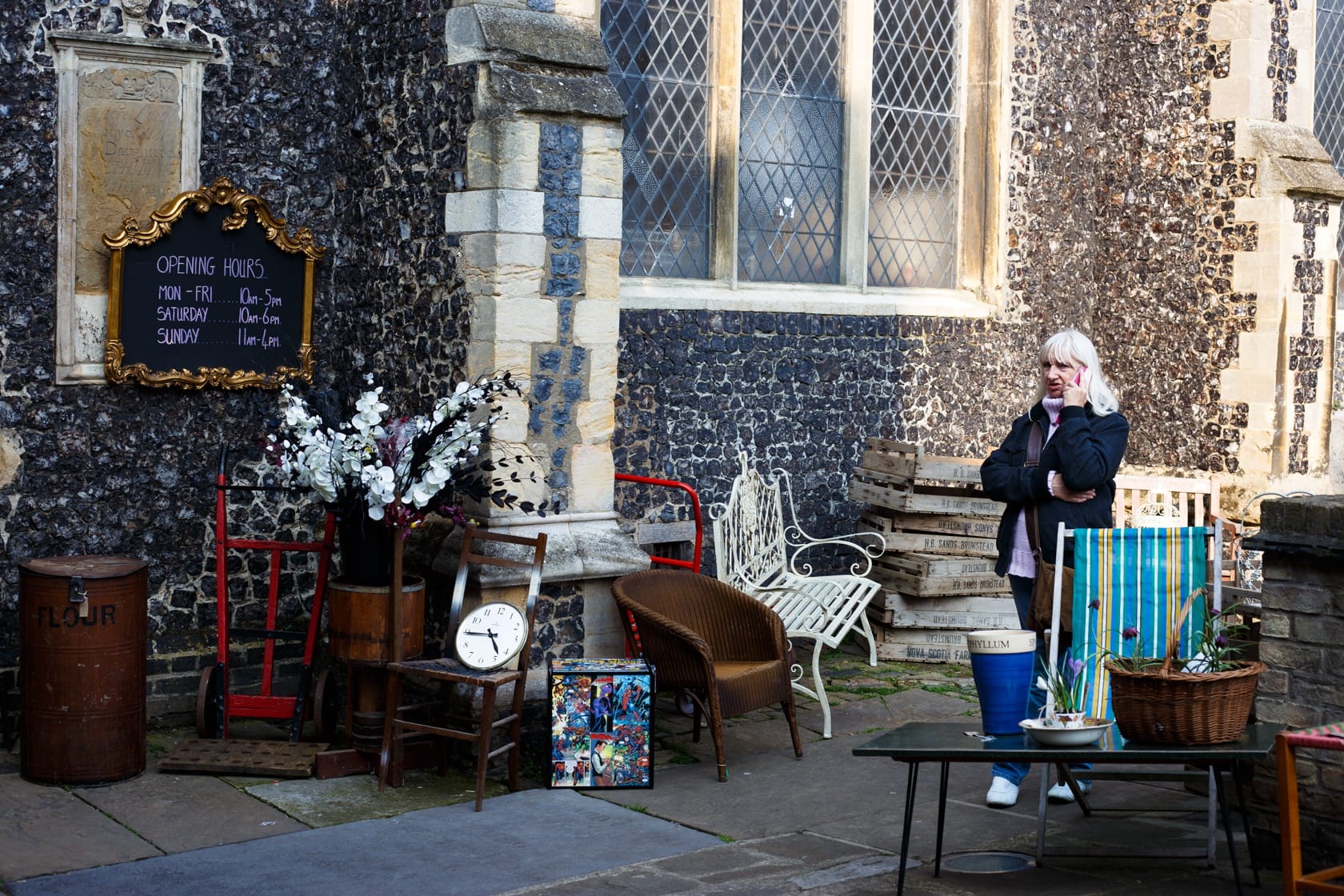 Hot tip: In the depths of the British winter it starts to get dark around 16:00. Head to the Lanes then, while the shops are still open but it is dark outside, and you can capture some really atmospheric street photos of lit up windows and silhouetted figures.

Just over 5 minutes walk from the city centre is my current favourite spot for street photography in Norwich. Magdalen Street is a long, largely straight Mediaeval era road lined with shops. It is one of the more culturally diverse parts of Norwich, with a strong tradition of welcoming people from all different backgrounds and walks of life, owing to it’s importance as a centre of Norwich’s manufacturing industry. There’s a great range of shops along here, including a Polish supermarket, a Halal butcher, and Jewish café, as well as numerous antique, bric-a-brac and jewellery shops where you can uncover all manner of hidden treasures. A 50mm or longer lens is best utilised here, so you can shoot from one side of the road looking over to the pavement opposite and capture people passing the store fronts. Next to Magdalen street is Anglian Square – a Brutalist style shopping centre who’s heavy geometric lines can be brilliantly utilised in street shots for an authentic very ‘urban’ effect. 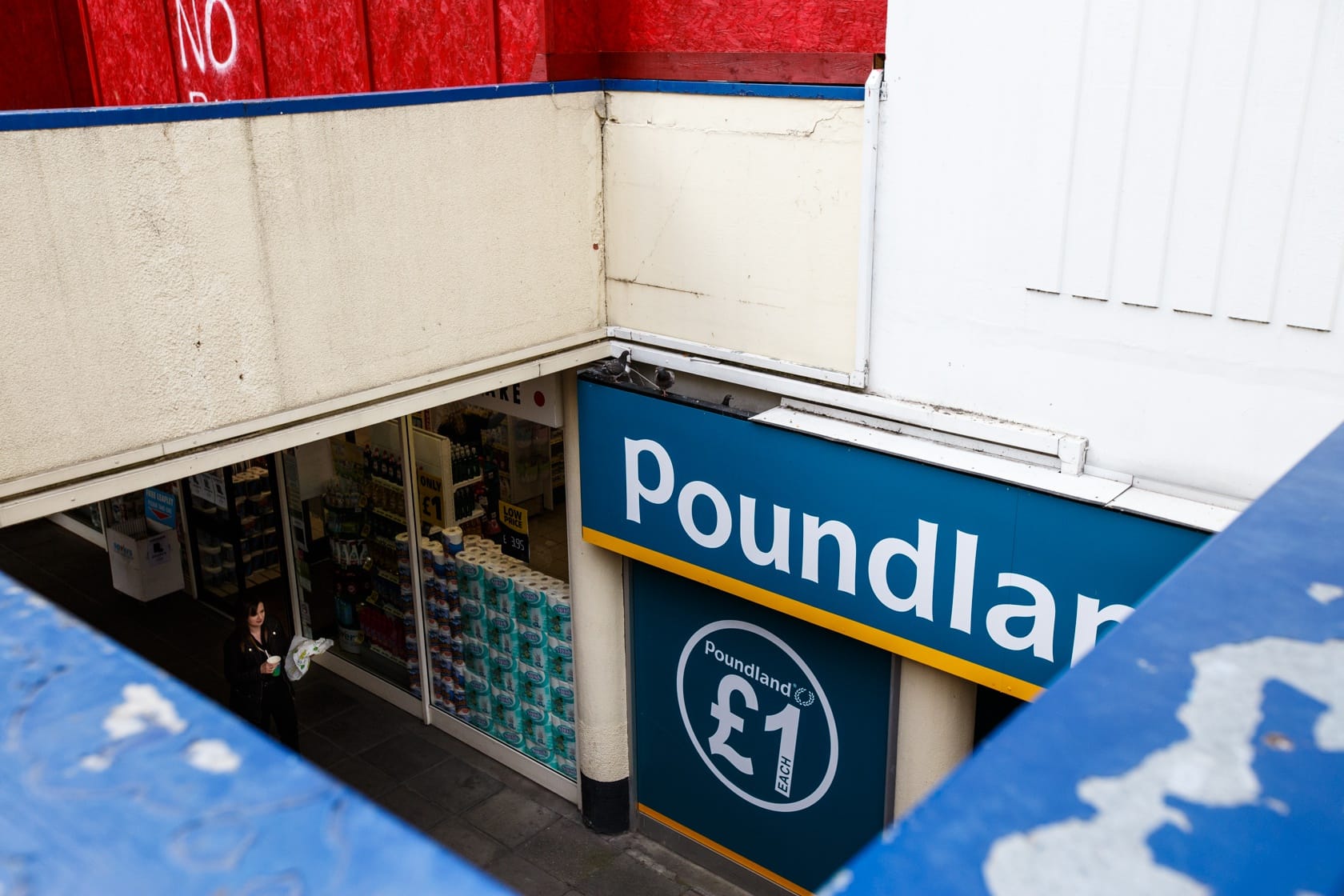 Hot tip: Head up the stairs to the first floor of Anglia Square to catch photos of people walking below to shake up your photos with a different viewpoint. Also, try having a look around some of the fascinating shops on Magdalen street and see what kind of photos you can get from inside the shops – perhaps looking out of the windows onto the street outside.

Norwich is a great location for street photography. It’s got loads of historic interest and distinctive architecture, but most importantly a rich and vibrant cultural vein running through its heart. As I hope I’ve indicated here, there’s often some kind of event going on somewhere in the city – be it an organised or impromptu one. A people are a city’s lifeblood and soul, and are the most important part of a street photograph – even if a person isn’t necessary featuring in a shot there will be a subject or point of interest that has been shaped by a person’s influence – that’s the very essence of an urban street photo. Norwich has a wealth of interesting characters in abundance and I think this shows through in photos shot here. I’m proud to call it my city.