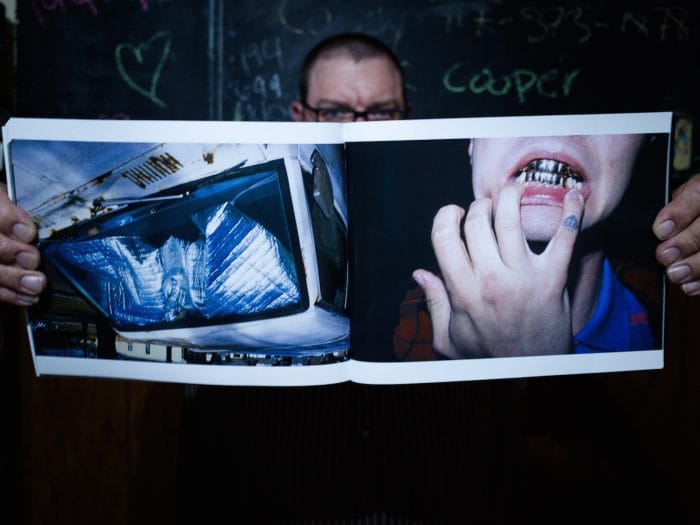 A big component of what makes street photography so appealing to me is the punk rock feel of the genre. Punk was a big part of my life and creative development. But it wasn’t just the rebellious and communal nature that was alluring. It was the DIY (do it yourself) methodology. Recording and putting out your own records. Writing and printing your own zines.

That being said,  I was anxious for the arrival of Day & Night, a joint DIY photo book from the two Minneapolis photographers, Kevin Horn and Kevin “Shakes” O’Meara. Very anxious. I was already turned on to Shakes’ work via the Elephant Gun collective and found out about this project from keeping an eye on his feed. And from a few “teaser” shots I saw, his work in this project was going to be in color. I was excited about this, because I was only familiar with O’Meara’s monochrome work. Work that was the visual equivalent of rough nights that would lead to the most glorious hangovers. And after hearing about Horn, I began following him as well. I took to Horn’s work immediately. Being both a street photographer and a cinematographer, his work demonstrated fantastic storytelling abilities. Wider, dramatic shots that looked like they could be stills from a movie. In a wonderful coincidence, both Horn and O’Meara were voted by www.streethunters.net readers as two of the top 20 Most Influential Street Photographers of 2015!

I jumped on the pre-order of Day & Night because the idea of the book was terribly intriguing. These two shooters, with different styles, working in two different cities, photographing fifty “subjects” from a pre-determined list. Horn, with his cinematographer’s eye would shoot during the day in New Orleans, and O’Meara, with his raw and up-close style would shoot at night in San Francisco.