As a female photographer myself, I also find inspiration in other women street photographers. I can connect somewhat emotionally and relate also as a woman not just as a photographer. I would like to share my ideas in this new series called PhotograpHER. This is a series where I will be talking about women photographers that inspire me and the ways that I connect with them. In this first installment, I will be discussing Mary Ellen Mark. In the following weeks, I will be discussing photographers such as: Diane Arbus, Vivian Maier, Helen Levitt, Susan Meiselas, Diana Markosian, Carolyn Drake and Bieke Depoorter. So stay tuned!

Mary Ellen Mark (http://www.maryellenmark.com/) (20 March – 20 May) is the first photographer I will be speaking about in my addiction diary, as I mentioned before.

Mary Ellen Mark was an American photographer well known for her photojournalism, her portraits, her commercial photography and of course, my favorite, her documentary photography. She documented prostitution and circuses in India, homelessness in the United States, mental institutionalization and orphanages, refugees camps in Ireland and much more.

Her work spans over almost five decades. The fact that she was active for so long, makes her work so much more interesting, as you can see in her photos how her style evolved throughout the years but also how the world has changed. In 1962 she got her degree in photojournalism and a BFA award. Her first book called “Passport” was published in 1974.

In 1977 she became a MAGNUM photographer for a period of 5 years, but decided to leave as she felt constrained. Mary Ellen Mark liked working on her own, not being part of any organisation and not copying other styles. She was self motivated, self driven and unique. 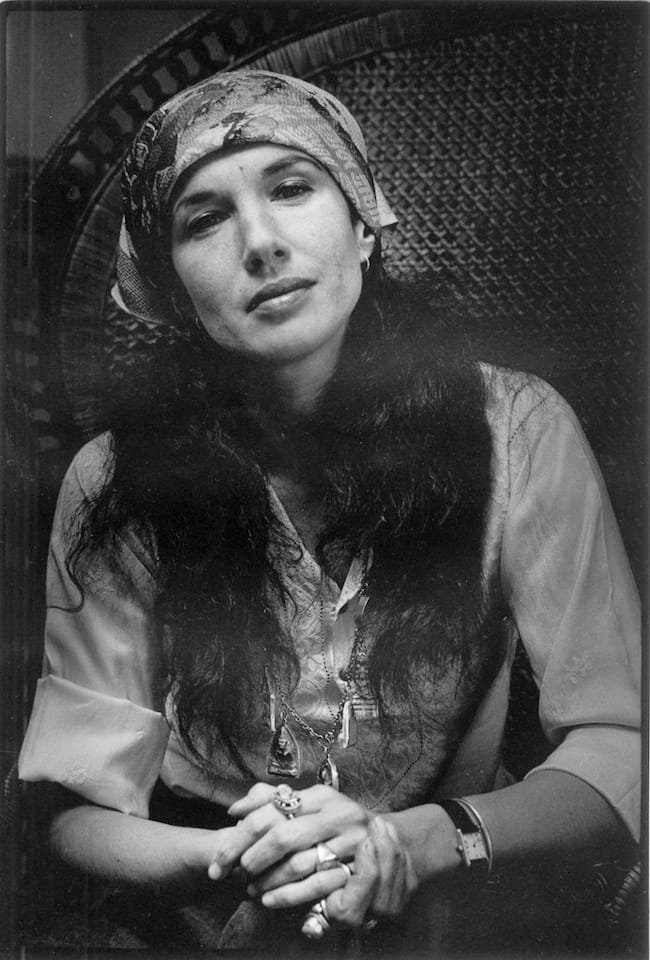 I think that this a clever quote because it is true. On the street it can be so difficult photograph. You have to be quick, decisive and able to think fast. Training yourself in street photography is a great way of evolving as a photographer. 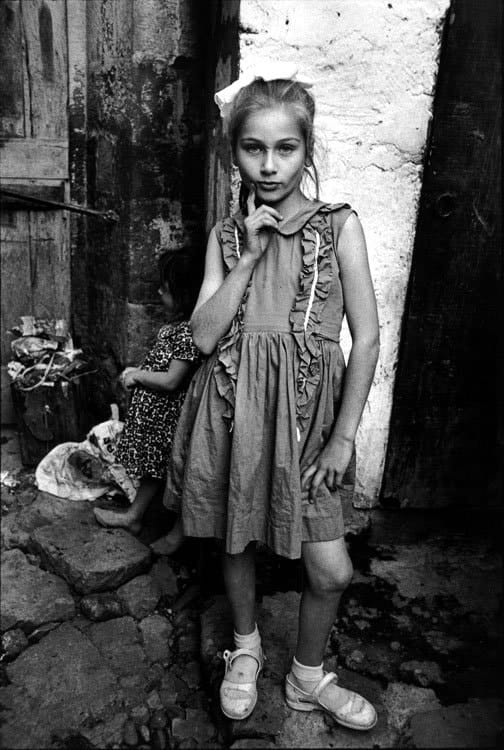 My addiction for Mary Ellen Mark

I must say I really have an addiction for her, that I have looked through her photos so many times, I have watched her presenting her work, and read a lot read about her. I am truly hooked. For me, her being a female photographer and being able to travel so much and be so brave as a documentarist inspired me a lot.

Her projects from India are so fantastic I could look at them over and over again. I love the series “Indian Circus”. The fact that she could capture so many intimate moments of the circus life at that period of time, her passion and love for these places she documented is pure beauty to the eye.

Mary Ellen was the kind of photographer that took great interest in every frame she composed, she thought that every photo should stand alone, not necessarily be part of a wider story. I like that about her so much, it shows that even though you don’t know the story or have no time or interest in it you can still appreciate a single photo very much. This is what I try to do as a photographer too, and I think it is a good direction to follow.

I also love her interest for her subjects. Mark was the kind of person that would work for years to gain the trust of people she was photographing before capturing moments that were all together spontaneous and stirring. Not many people would choose to go and live with workers from the circus in India, or in prostitutes homes, or think about staying in hospitals. Mary Ellen did all this, and she has done it with grace and love. This is something that can easily be felt just by looking at her work. 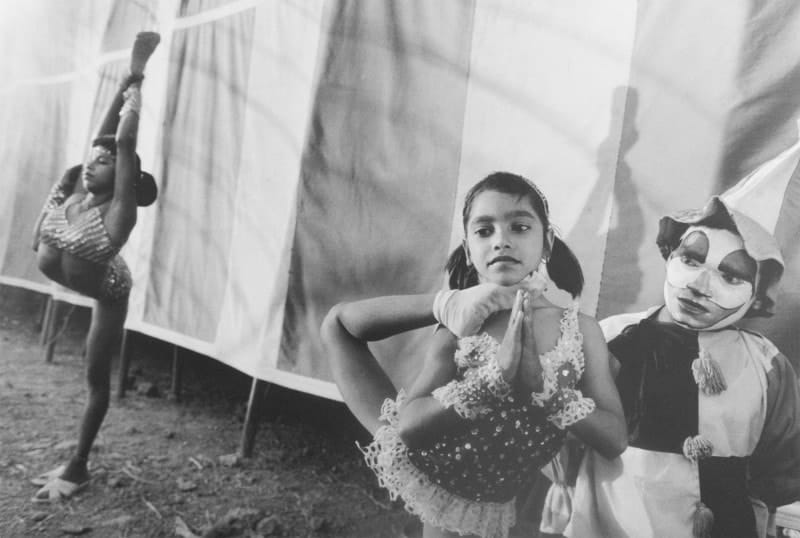 “I fell in love with the Indian circus at the same time that I fell in love with India. It was 1969, my first trip there. I was in Bombay with a friend and we went to see a circus at ChurchGate. I was immediately struck by the beauty and innocence of the show. I vividly remember seeing a huge hippo in a pink tutu being coached to walk around the ring with his mouth open. At the end, he (or she) was rewarded with an enormous cotton-candy cone that matched the tutu.”

Her love for the subjects she photographed, the patience she demonstrated and the fact that she was a woman, kind of makes me as a female photographer feel more brave.

I also love her chromatic choices when shooting in colour. For example, I adore her prostitute photos from India. The red and green combinations, a primary contrast used by Mary Ellen Mark that adds so much tension to her frames revealing so much of the atmosphere in the places these women lived, making the viewer sense the carnal desires these subjects felt .
Painters and especially impressionists used this colour contrast to express sometimes the violent passion of people. I find myself, picking contrasts that would make the frame more powerful when using color in my photos. 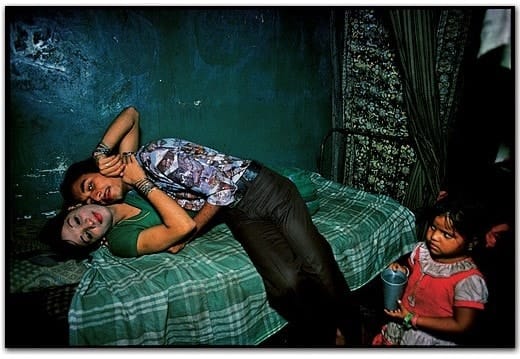 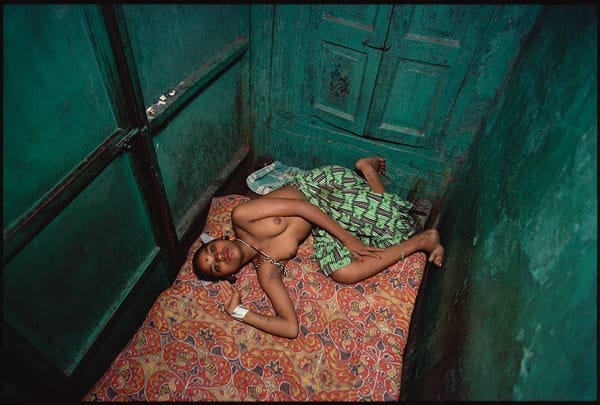 Mary Ellen Mark has all the right ingredients for becoming an addiction to me. I would like to add just one more thing. I like her love for capturing strong and real moments, and not those Photoshop and post processing tricks that could make one’s photos stronger than they really are. In my opinion a good photographer is someone that can capture the best possible moments with his camera. Post production is just a way of enhancing what already exists there. You can’t make a bad photo look amazing just by having great post processing skills. The photo has to truly be good to “speak” to its viewers.

From time to time I also tend to use analog, although I must admit that digital comes handy. But I feel that analog cameras have something special. When you shoot with film you slow down and take more time to think of how you will compose a scene. It teaches you about patience and you could say it helps you become more organized with your work. And a good photographer should have both these qualities.

“I like the idea of being able to capture a moment in time, but all that has changed now with people being able to Photoshop images so much. You don’t know what is real any more and what isn’t. But I am an analog photographer and it is about capturing the moment of reality. It hasn’t changed for me: I shoot film and I will continue to shoot film. I think it is more beautiful. It is the reason I became a photographer. I am not an illustrator; a lot of the digital, Photoshopped photography is what I would call illustration, not photography. With that kind of work the post-production guy is probably the most important guy in the process.”

In conclusion, Mary Ellen Mark became a beautiful addiction to me. She is a photographer from whom I have learned a lot and I still feel I can learn even more from. I learned about the love for your subjects, about the importance of every single frame having an aesthetic value, about the power of chromatic choices in expressing our feelings towards our viewers, I also learned about persistence, courage and believing in myself.