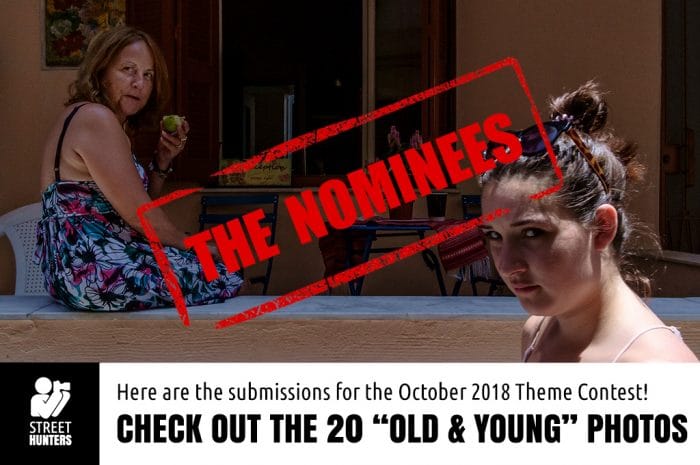 The tenth Monthly Theme Contest photos for 2018 have been submitted and we have made our choices. Please keep in mind that the process of choosing a photo from the October 2018 Street Photography Contest Submissions was not easy!

ATTENTION: The photos that didn’t meet the Theme or the Editors criteria were not chosen to be in the shortlist. They have been disqualified or removed. If your pic isn’t in the shortlist, don’t get discouraged. Try again next month!

At this moment I would like to thank each and every participant for submitting their photograph. We have a great collection of photos with “Old & Young” to show you! This time we had 20 valid submissions which can all be seen below.

Here are our favourite 20 photos that made it through our strict Editors criteria!

Every month each one of us here at Streethunters.net will pick one photo as a nominee. Here are the photos we chose and the reasons why:

“Having just turned 50 a few months ago, I’d be a liar if I said I haven’t been thinking about ageing. Not that it weighs heavy on my mind, but the fact that I’ve become a quinquagenarian does make me notice differences between the young and the old a little more frequently then in the past. So, when considering the grey hairs, creaky joints and all the wonderful little pains that come with getting older… this theme hits close to home. There’s two tires of movement implied in this scene that play on the young/old contrast nicely. On the left we have what appears to be a young girl, face obscured by the twisting, whirling fabric. To me this represents the vibrancy and activity of youth. Off to the right, we have the older woman caught in mid-stride of an implied slow and steady gait. This represents our steady march through our golden years, soldiering on, day to day. There’s as much beauty in this as there is in the youthful left side of the image. This contrast plays out in a beautiful swath of light accentuated with angular shadows. Very, very nice capture!”

“There were two photos which really stood out for me when I made my shortlist from our list of nominees, and I’ve been yo-yoing between the pair of them as my pick over the last few days. In the end I managed to make my agonising Sophie’s Choice and select this photo simply because it was the one I found most arresting. It’s a powerfully evocative photo that instantly transports the viewer right into a scene which harks back to a bygone era. The colours and ‘feel’ of the shot is very ‘la dolce vita’, very much synonymous with a romantic Italian seaside scene from the late ‘60s. The background of the shot is dominated by the mass of blue sky, which the photographer has opted to colour balance and process (through film choice, or post processing) in this wonderful pastel blue tone, which is harmonious with the deep blue paint spot on the rock and the blues in the bathing suits of the boy and the young woman in the foreground. This creates a nice triangular link between the background, middle ground and foreground. The ‘triangular effect’ works between the interaction of the people in the frame too, with the older man in the centre of the frame facing towards the young woman, who looks horizontally across the frame, leading our eyes to the boys in the far left, and particularly the boy facing out towards to the sea, taking us on a journey around the frame. Compositionally, this street photo works perfectly, with the young woman as the focal point of the shot placed along a vertical third of the frame. Her back and arm are both dead straight, running parallel to and mirroring the left hand edge of the frame, while she sits perfectly in profile on a flat plane, which creates some superb shadow tones across her face and hair. The overall effect of the scene and interplay of the figures in the scene is very evocative and somewhat romantic – the pensive relaxed older man comfortable in his thoughts and at ease, the young woman – full of the confidence of youth who appears (whether intentionally or not) to be posing for the shot, and the boys, who are oblivious to the photographer and totally engaged in playing by the sea. A single photo perfectly encapsulates the dichotomy and contrast between not just old and young, but even between childhood and adolescence/young adulthood. This is an incredibly powerful and moving photo, and cinematic in scope and feel. Great work!”

“This time the choice for me was obvious. Without having second thoughts I decided to nominate this photograph due to the fact that it is spot on the contest theme “Old & Young”, it is composed and framed beautifully and has such beautiful colours and lighting. Let us dive into the image and disect it in search for the “Old & Young” concept we requested this month. So the way I see it, in the foreground, in the right half part of the image is an older lady, sitting alone, probably remembering how it was to be younger. She has turned a definite “corner” in her life and has left everything youthful behind her. And this is where the other half of the photo comes in, the part on the left hand side. In the background we see a mother handing her younger child to her older daughter. A new family is just beginning to form its long lasting and complicated bonds, like all families do. A baby, a young girl and a young mother find themselves at the start of their lives. The baby, is just born, the daughter experiences how it is to have a sibling and the mother is a mother once more. Coming back to the old lady we discussed before, we can now see the antithesis between the two halves of the photo and the two levels of depth, the contrast between the loneliness of old age and the energy and complexity of youth. I really like this photograph. Congratulations to the photographer for capturing this moment.”

“Cinema, this for many years was my life, so when I saw this photo it jumped out at me. I love the way the photographer composed this shoot to show both young and old, I’m left asking questions which I also like. The photo wouldn’t really work as well if it would’ve been the old watching the young, I like the way the future generation is watching via a tv. For me, the photo wouldn’t work in colour. One other quick comment, well done to the photographer for not over editing the photo.”