NOTE: This is a Guest Blog post written by Timothy Lunn exclusively for www.streethunters.net.

Silhouettes, shadows and solitary figures traipsing through winter rain have long been staples of street photography.

But they’re not everyone’s cup of tea.

Street Photographers as diverse as Henri Cartier-Bresson, Elliot Erwitt and Tavepong Pratoomwong have long championed the ‘brighter side’ to life, incorporating humour, comedy and a sense of the absurd into their work.

Erwitt in particular held humour in high regard, claiming:

“Making people laugh is one of the highest achievements you can have. And when you can make them laugh and cry, alternately, like Chaplin does, now that’s the highest of all possible achievements. I don’t know that I aim for it, but I recognize it as the supreme goal.” 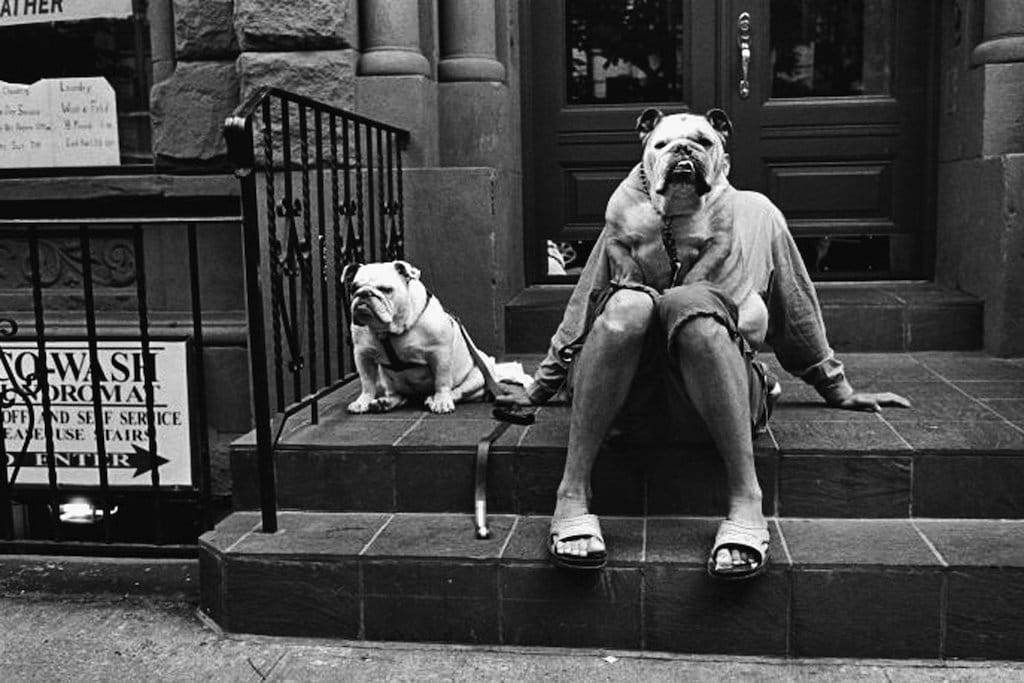 But this goal of making people laugh ‘Like Chaplin does’ is harder than it appears.

Many of us struggle to express humour through our photography, resorting instead to the tried and tested trends of existential despair and postmodern misery.

With such cheery thoughts in mind, Street Hunters turned to one of London’s leading street photographers – Becky Frances – for some helpful tips and advice.

It’s a hot day in the city. Tourist buses pass by on the bridge overhead, horns tooting. Shimmering, a thin film of car exhaust is just visible over the tops of buildings.

But on a thin strip of artificial grass, rolled out in front of a quaint book store, five city dwellers bask in the pollution. 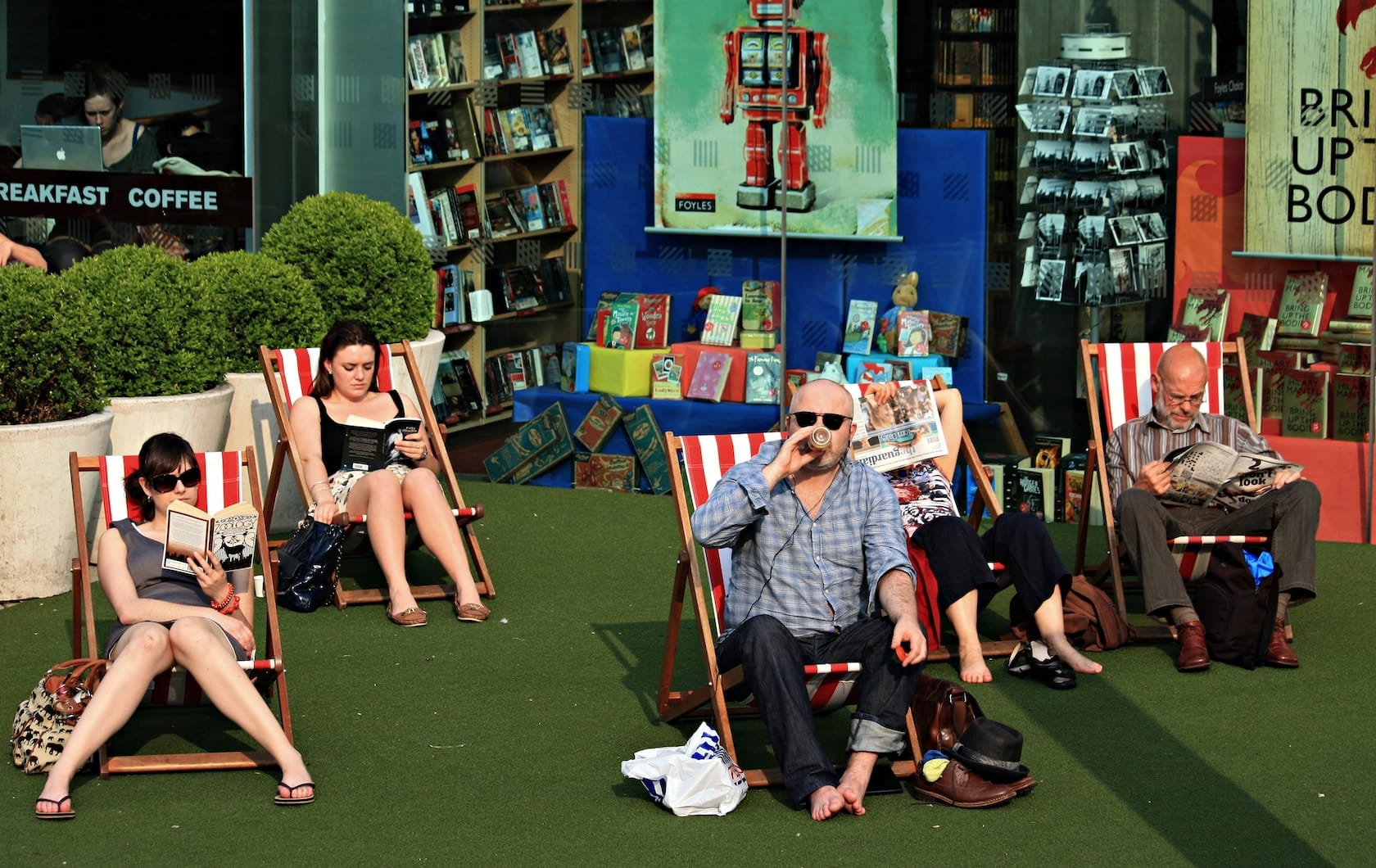 Becky describes this absurd scene, titled English Eccentrics, as the first photograph that defined her street photography. However, it wasn’t until her involvement with Flickr Groups, such as Street and Repeat, that her compositions developed in complexity. 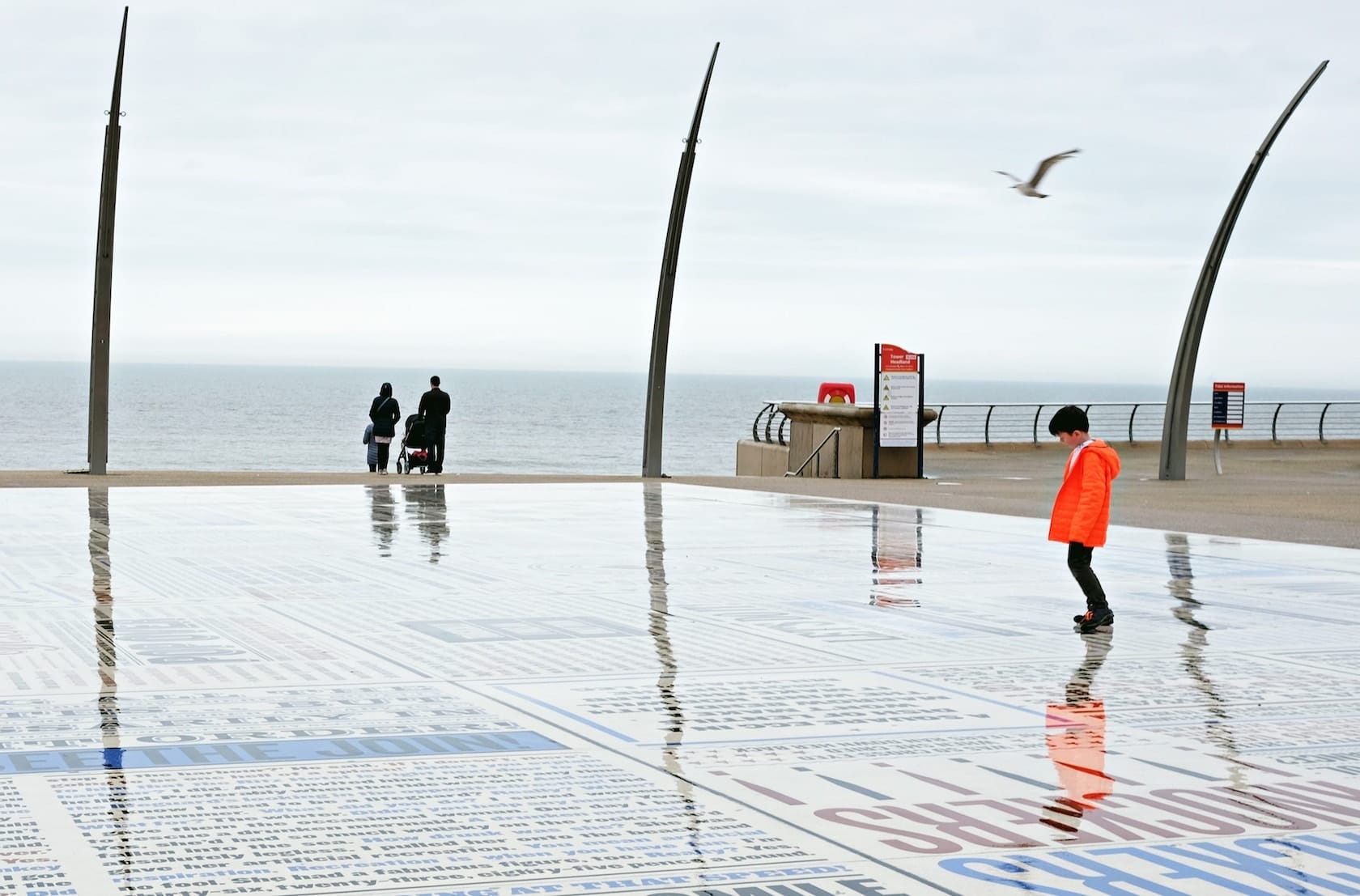 Here she talks to Street Hunters about her five top tips for expressing humour in street photography. 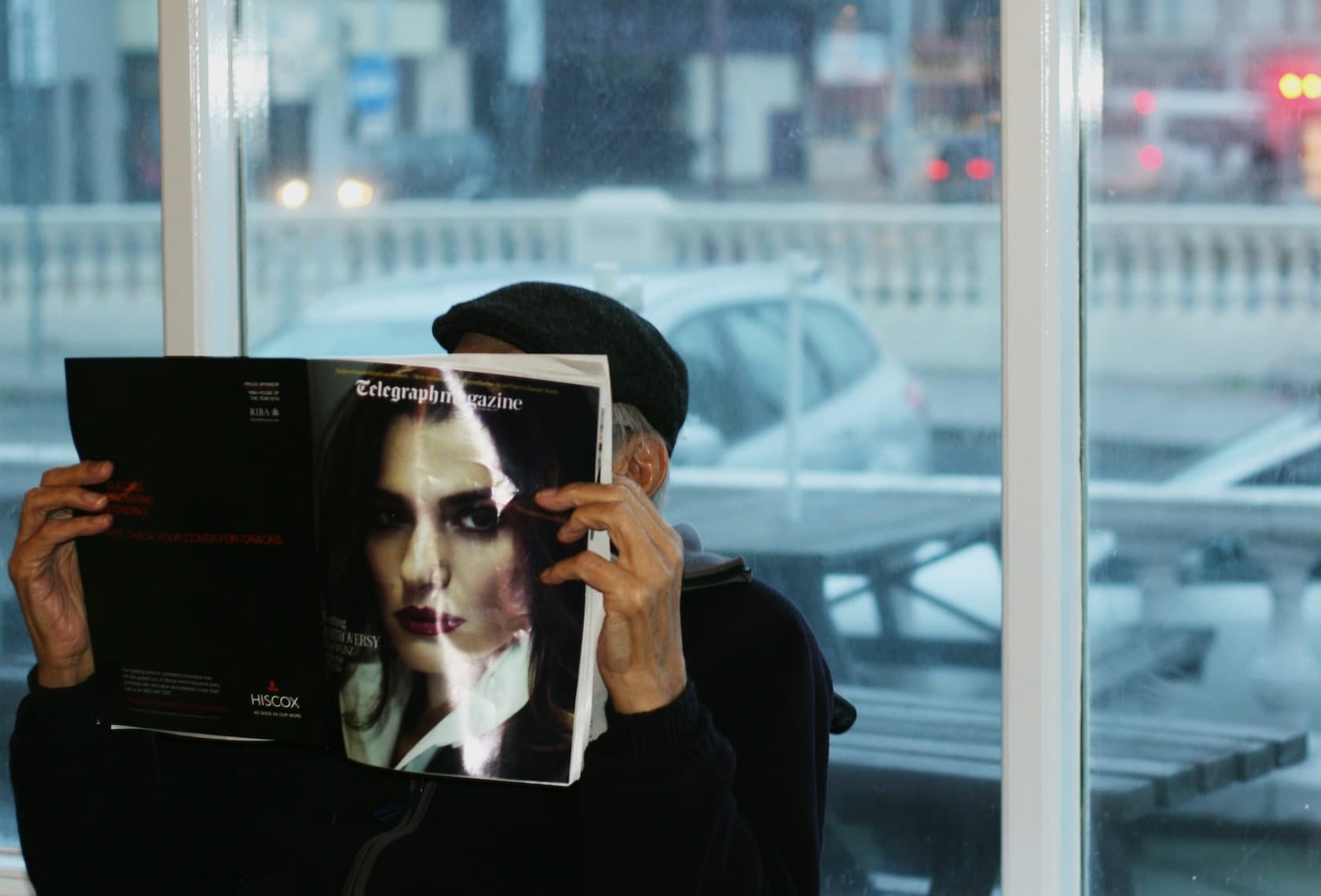 1. Erwitt’s comment on Chaplin and humour certainly inspired us. Which photographers have inspired you to pursue comedy in your street photography?

I was first drawn to street photography when my father bought me a book by Martin Parr. I was enchanted by his sense of the surreal and the ridiculous. He would take what might be considered a perfectly ordinary scene and interpret it in his own special way: a way that would make the viewer look twice at the image and perhaps coax a smile from them. His series of photographs taken in New Brighton near Liverpool are an example of this.

Later on I was (and still am) an admirer of Matt Stuart. He sees with what I would call a ‘street photographer’s eye’, that is, he sees beyond the scene that is in front of him to what might happen if the composition were unusual. He is very clever in putting together or spotting a scene, such as with the photograph of the peacock and skip. 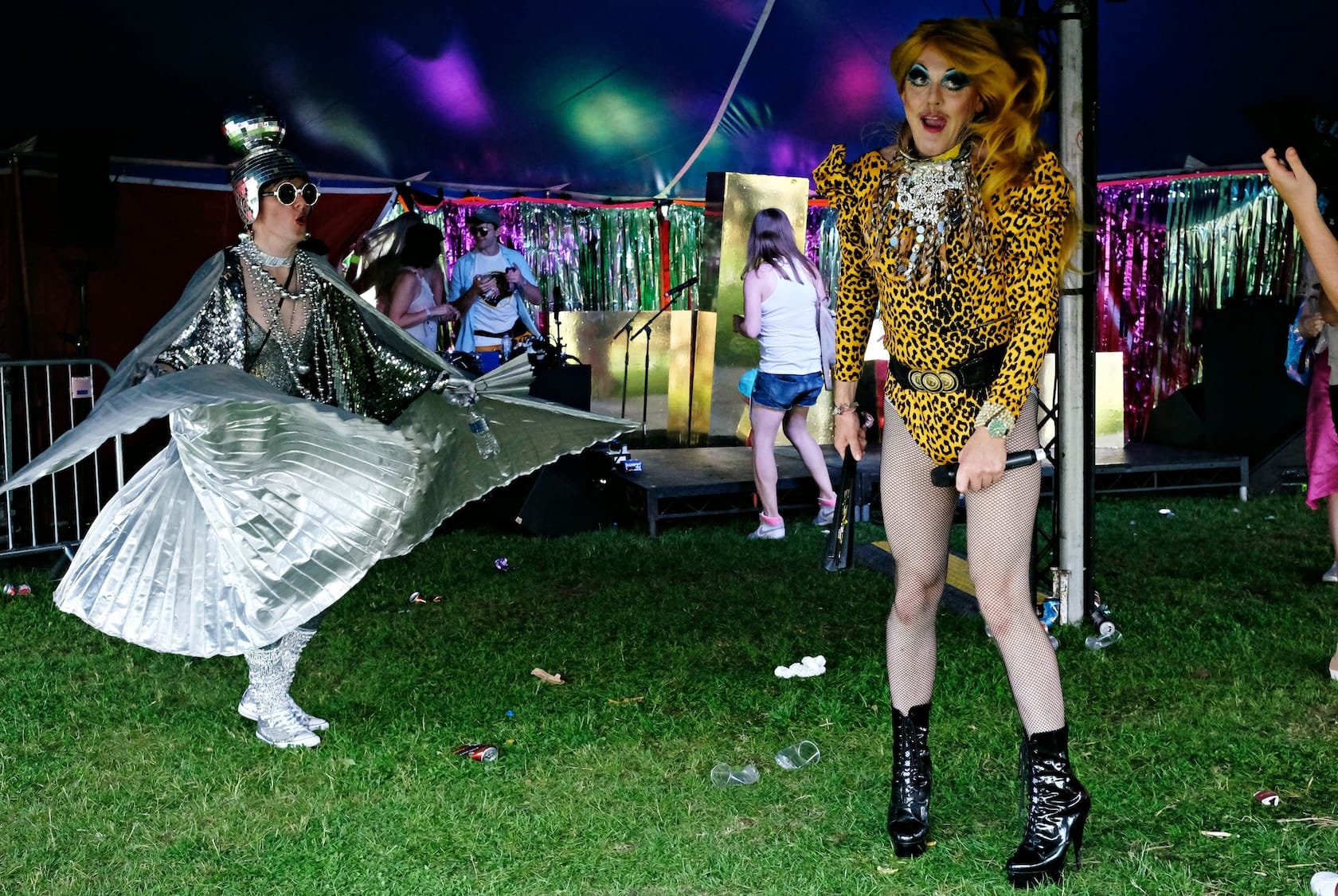 2. Valerie Jardin has discussed the comic potential of animals – especially dogs – in street photography. What other subjects do you look for when telling jokes on the street?

When I first began looking for humour on the street, I looked solely for an unusual looking person or an expression that made me laugh. Because of this a lot of my early photographs were portraits.

When I decided to pull back from this style and look instead to shooting a whole scene, I found it a difficult jump to make. I had to completely change my mindset. However, I wasn’t finding the candid portrait work challenging and wanted to incorporate form, style and more complicated composition. This pushed forward and developed my work.

I now find when I’m out on the streets that I’m looking for a scene that might provide humour. This style of photography requires more patience than before, but the rewards are often greater. For instance, I came across a window display in North London which featured a holiday scene. To me, this was a strong backdrop for an image, so I waited around to see if anything would happen.

Luckily, an Hasidic Jew appeared from under the shop’s shutter and disappeared up the street. The idea of someone escaping from what most people would consider an escape in itself appealed to me, so I took the picture.

As an example of something more immediate, you could look at my photograph of a woman and her shadow, taken in Docklands. In the bottom of the scene, someone’s hand appears to reach out towards her as she strides away. For me this is an example of a photograph that was shot quickly and works because of the inclusion of the hand in the bottom of the scene. 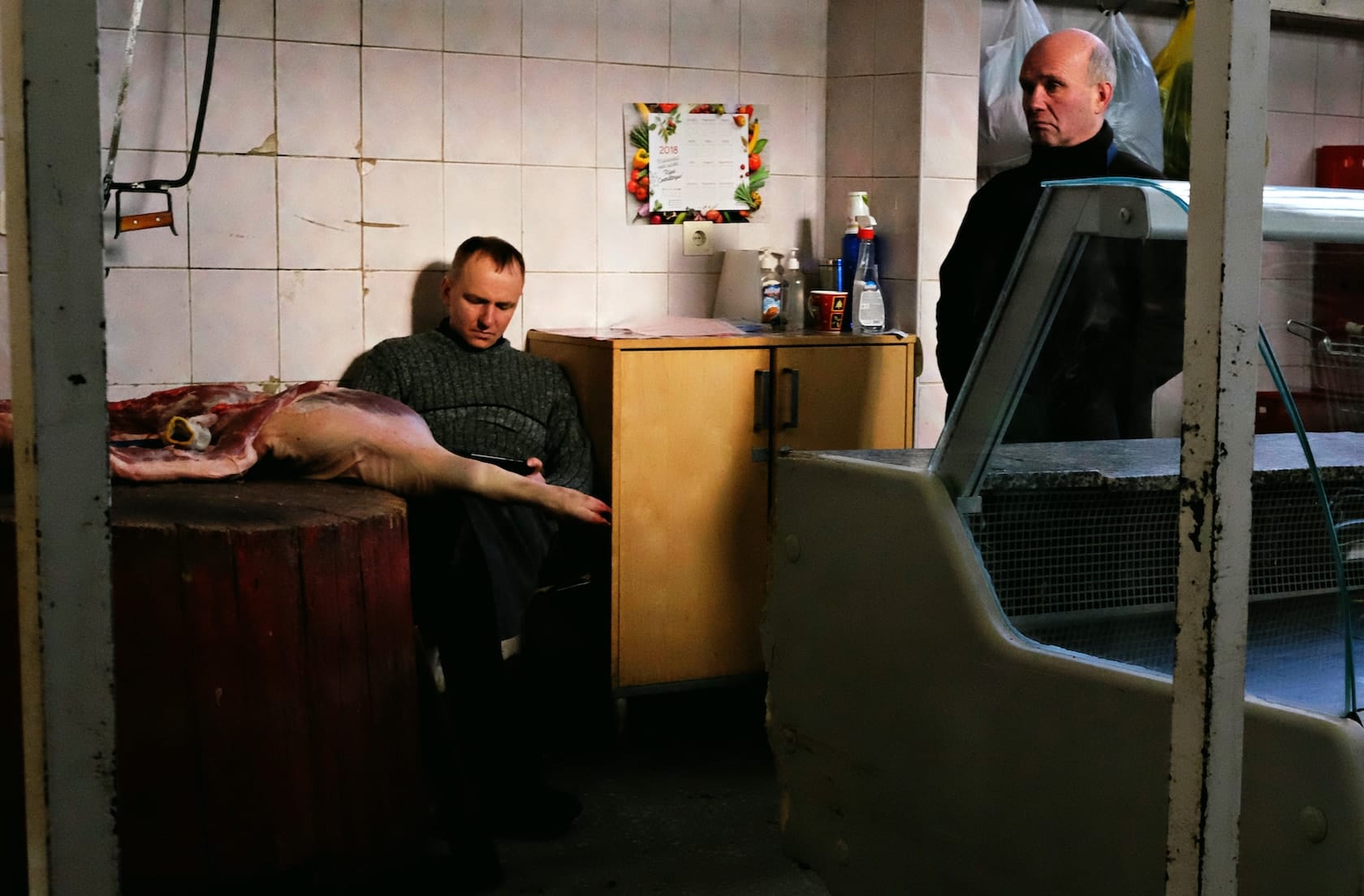 3. Subjects aside, let’s talk about style. Two men stare into space, the skinned corpse of an animal stretched carelessly across a kitchen table. Something about the juxtaposition of these elements appears darkly humorous. How can photographers use composition to craft humour?

I joined a group on Flickr called Street and Repeat because I wanted help to really think about my composition, to get advice and honest critique from people with a lot of experience.

Each month you are given an instruction (I remember my first was Look Up) and you have to think really hard on how to produce an image that is both unique and works on a compositional level. This is where I really started to learn about layering an image, where the fore, middle and background are defined by the different things happening in them.

An example of this would be a photograph I took in Blackpool. This shows a girl with a young puppy in the foreground, diners in a fast food cafe in the middle ground, and people looking through the cafe window in the background. Although this is not a scene that produces belly laughs, it makes me smile because it illustrates Brits on holiday perfectly.

I’ve also begun to look at producing a series of images that include only parts of the people I’m shooting. Also not strictly hilarious, but I hope people find them funny in an abstract and absurd way.

I do still come across scenes that are funny on their own.

One such image was taken in early Spring on a council estate in Hackney. I was there because I was aware that a group of clowns were coming together to celebrate the birth of Joseph Grimaldi, the King of Clowns. Instead of hanging around with the other photographers (of which there were many), I took a walk along a street and noticed a group cramming themselves into a local community centre. Luckily for me, they were in overalls with the lettering Clown Cleaning Company. Shutter down, job done. 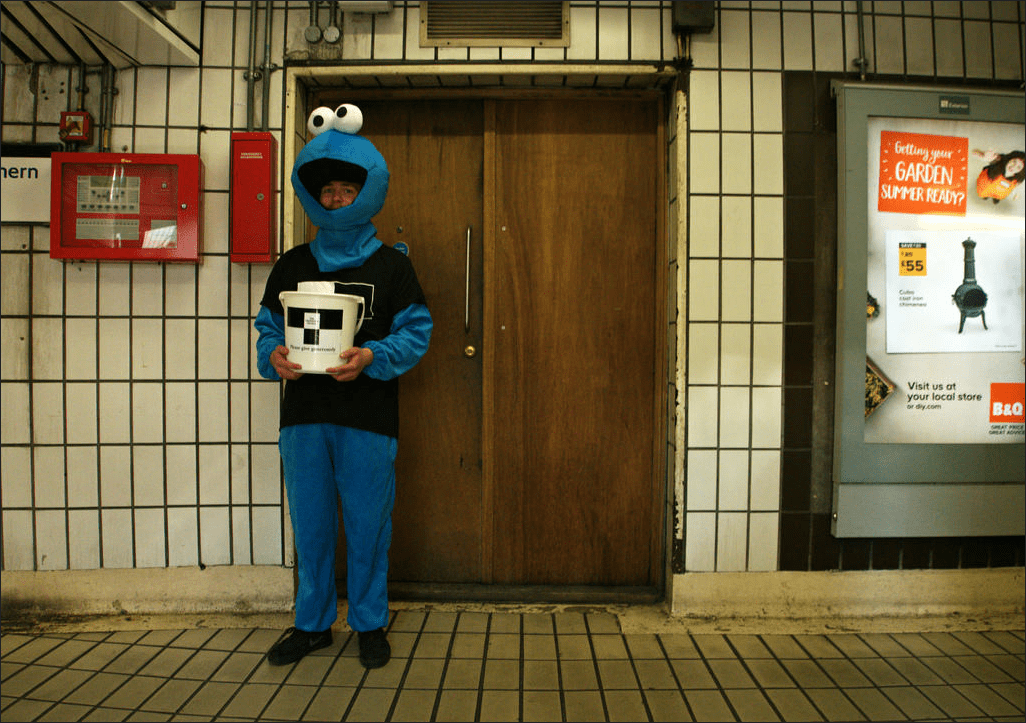 4. In the ‘Street’ category, only two out of ten photographs in the Sony World Photography Awards could be classed as comedic. Why is humour so under-represented in street photography? Why do you think we gravitate toward the monochrome and moodier scenes?

I understand that people are more attracted to moody black and white shots, and from the point of view of engaging with your audience, I think it’s easier to do with these sorts of image.

Colour photography that shows humour is incredibly difficult to get right. It’s hard to conceive in the first place and it only really works if you get your composition right, you take your shot at the decisive moment, and most of all, if other people find it funny.

Humour by definition is something unexpected and out of the ordinary – a joke is ruined if you spend too long thinking about it! Likewise with jokes in street photography: they happen very fast and you need to arrange a scene quickly to make it humorous. 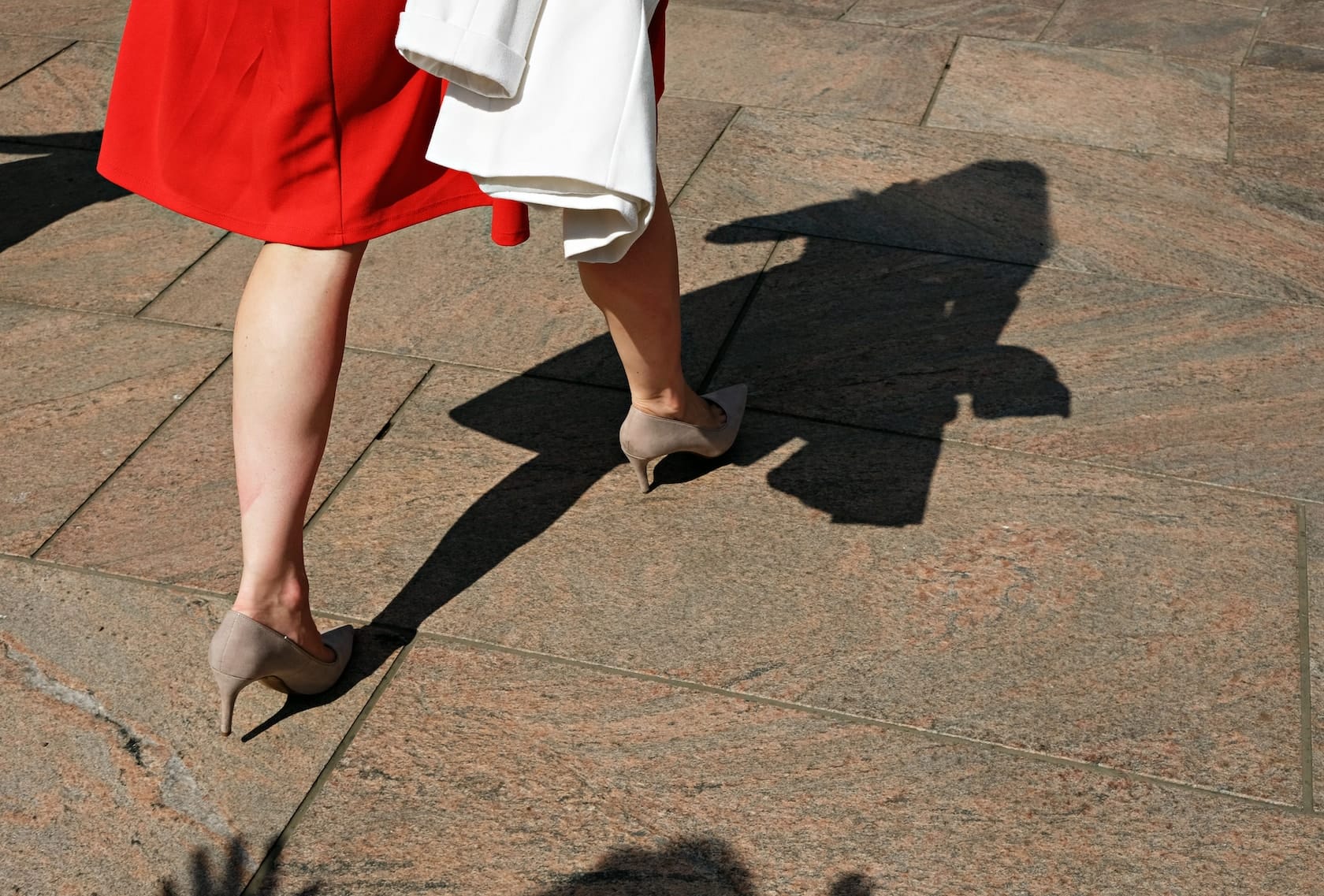 5. Erwitt previously claimed humour was the supreme goal in photography. Do you agree with his statement? What is the role, purpose or function of comedy in street photography?

Humorous street photography means that I can leave my house and search for scenes that make me smile.

I’m not concentrating on capturing subject matter that tugs at the heart strings or deals with social issues. Although I think it’s important to document such scenes, it’s not for me.

The way I work makes me happy and I hope makes others happy too: that’s what it’s all about. I believe that the Brits as a nation are very easily caught up in absurd scenes through our traditions and the way we live our life. It’s good to be able to capture this part of society and to know that street photography isn’t all doom and gloom, nor is the everyday life it reflects.

Humour is truthful to life and to document it is incredibly fulfilling. 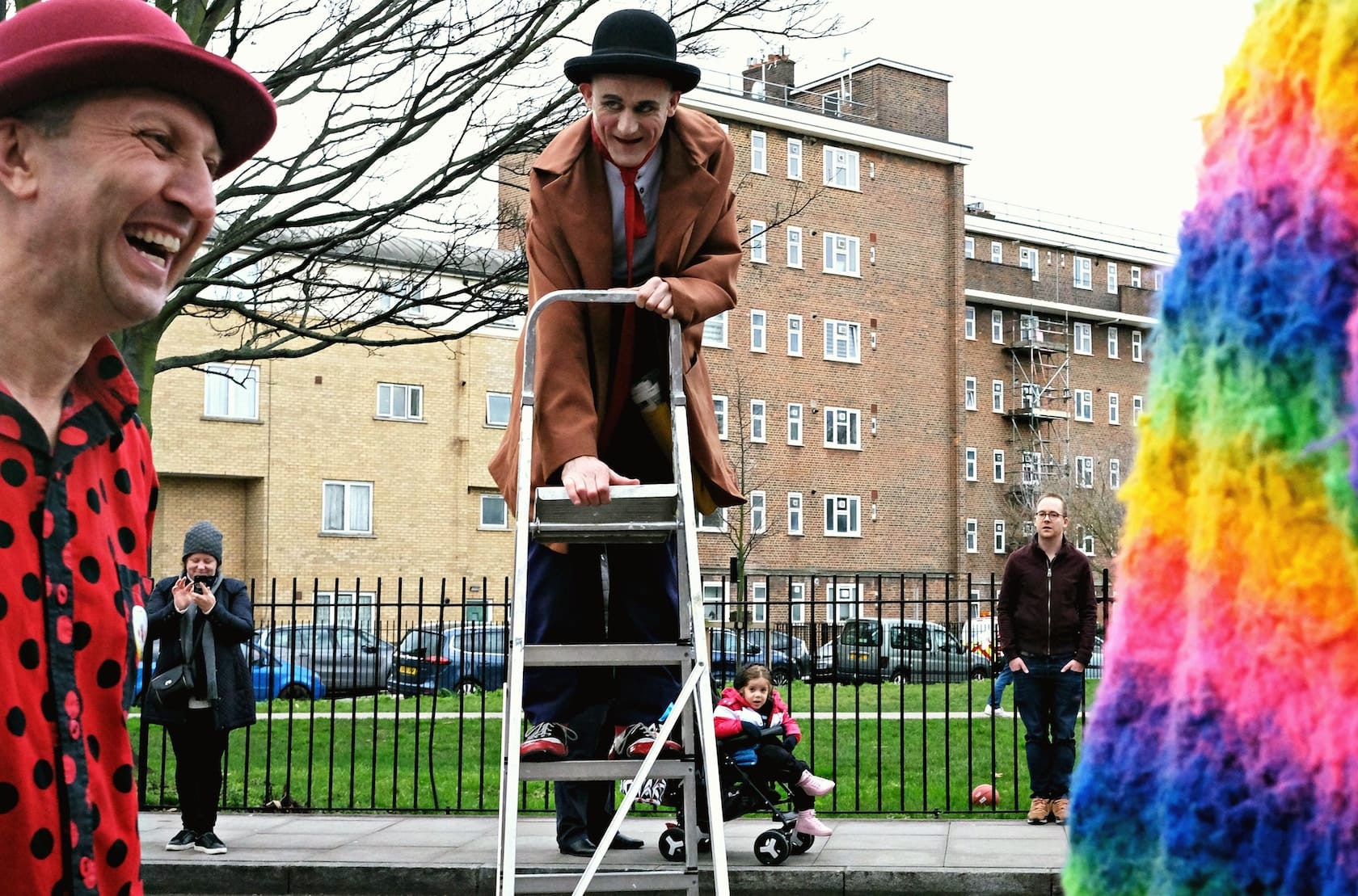 So, there you have it.

Street photography is as much about deckchairs on a London side-walk as it is about towering cityscapes and shadowy silhouettes.

Whether juggling juxtapositions or punning with billboards, creative options exist aplenty when exploring the comic side of street photography.

With these puns in mind, we encourage you to lighten up, expose yourself to something new, and focus on the everyday, absurd events that happen on the street.