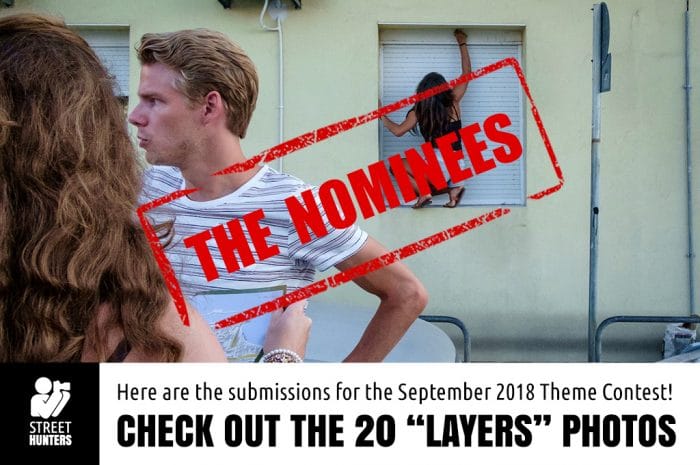 The ninth Monthly Theme Contest photos for 2018 have been submitted and we have made our choices. Please keep in mind that the process of choosing a photo from the September 2018 Street Photography Contest Submissions was not easy!

ATTENTION: The photos that didn’t meet the Theme or the Editors criteria were not chosen to be in the shortlist. They have been disqualified or removed. If your pic isn’t in the shortlist, don’t get discouraged. Try again next month!

At this moment I would like to thank each and every participant for submitting their photograph. We have a great collection of photos with “Layers” to show you! This time we had 20 valid submissions which can all be seen below.

Here are our favourite 20 photos that made it through our strict Editors criteria!

Every month each one of us here at Streethunters.net will pick one photo as a nominee. Here are the photos we chose and the reasons why:

“When it is done right, layering in street photography can make a scene a feast for the eyes. With impact in the fore, mid and background, the image gives the viewer a place to stay and explore. Often, this style of shot has a strong foreground element that draw the viewer in and the following layers will have just enough going on to make it a good layered shot. But the cream of the crop will deliver the goods throughout the image, with each layer as strong as the other. This is exactly what we’re presented with here. What a great capture! The two adorable youngsters off to the left foreground first catch the eyes, with the child to the right squared up to the photographer. Moving to the right of the image, in the mid-ground, is a delightful group peeking out of the doorway. Here are two cute, curious faces looking at the shooter and one perfectly positioned profile that is looking towards and leading us to the background of the image. There awaits the payoff. The goat, without a doubt, seals the deal. Expertly captured rich in colour and detail, this is a shining example of layering done right.”

“I don’t think ever had such a long ‘shortlist’ of favourite photos for one of our monthly theme contests. Partly that reflects my fondness for street photos featuring this theme style – I simply adore layered street photos and have upmost respect for photographers who can produce shots like this. But it also demonstrates the incredibly high standard of submissions for this month’s contest. Picking my favourite was a great challenge, and something which required several days of deliberation. What came down to it in the end for me was how skilfully the street photographer managed to connect all the layers in their photo to create a single powerful and memorable image that would be nigh-on impossible to replicate given how it perfectly captures a ‘decisive moment’. This street shot is all about colour, and that colour is orange! In the foreground the powerful leading lines of the road and wall draw our eyes towards the orange clad woman on the moped who is staring directly at us. Next to her, closest to the camera and prominent in the centre of the frame is a man who also happens to be wearing orange, and like the woman, sunglasses too! A pole sprouts out of the top of his head dissecting the frame in the middle, neatly mirrored by an upward pointing arrow sign too leading our eyes to the next part of the photo. The blue street sign encourages us to move our attention to the top right of the shot where we’re met with the amazing sight of three monks dressed in orange robes hard at work on a higher ‘plane’ of the image in their own self-contained area of the shot. The two men moving the box are frozen mid-action while the third looks on, with the effect being that all three manage to hold to different poses and shapes which really helps to add to the sense of depth and layering in the photo. As well as our linking colour of orange and the effective leading lines and signs connecting our layers there’s some nice links between the man in the foreground and the monks too – there’s a mirroring between the monk pushing the box and the foreground man in that both look and face towards to the left hand edge of the frame, while the standing monk looks down on a left diagonal back towards the man in the centre of the frame which is a nice extra touch! Add in the flashes of yellow from the taxis and decorative sheets on the wall (a harmonious colour with orange), and the blue background on the arrow sign (complimentary to orange) and we have a very smart well-crafted street photo with tonnes of depth. Great work!”

“The thing I like about images with Layers is that they tend to look busy but at the same time they have a natural order to them. The more layered subjects the more prominent is the effect of “ordered chaos”. The photographer of the photo I have selected for this month’s contest has managed to masterfully capture a moment in which 10 subjects exist in different layers and different heights. There are basically 3 prominent layers in the photo. The first one, with the slightly blurry people, is at the front. It includes the father with the kid on his shoulders and the other young teenager on the lower left third of the photo, the second layer includes all the kids hanging from the poles and swings and the third layer, is occupied by the guy looking up in the lower left hand corner of the photo. However if we look at the photo carefully, there is a fourth layer, that of the shadows of the subjects. The photographer has achieved an amazing result in delivering a non overlapping dance of characters at different levels and heights. An amazing result well worth the nomination! Congratulations and good luck!”

“As Andrew said when layering street photos right they become a feast for the eyes. So many photos submitted this month and more than half miss the theme, I’m going to have to write a blog about using layers in street photography. Anyway, why did I pick the photo I did, simple really the photographer knew what he was looking for when he framed up the scene and then he was smart enough to wait for the right amount of people. The photo had just the right amount of elements, the photographer also had a great eye for both colour and shadows. For me, all the layers came together to make for an interesting street photo.”