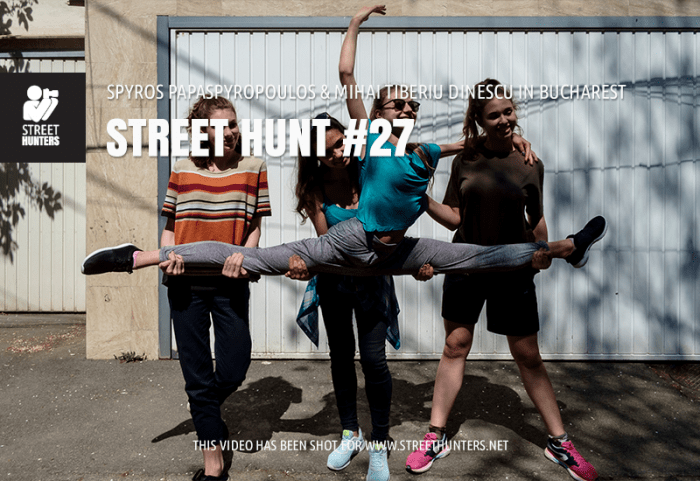 Today I am happy to present to you our latest Street Hunt video, Street Hunt No27 that we shot in Bucharest, Romania!

Before I continue, I would like to list all previous Street Hunt videos, in reverse order, for your convenience just in case you have missed them:

In April I visited Bucharest, Romania for the Phos Bucharest Street Photography Festival. While I was in Romania I managed to record a new Street Hunt video that I shot with the help of Mihai Tiberiu Dinescu. I hope you enjoy it!

Actually this video isn’t like the previous ones because it hasn’t been recorded in one day but in 2 days and one evening. I felt that I wanted to share more about Bucharest because I found the streets in the morning just as interesting as its surprisingly vibrant nightlife. This Street Hunt was also special for me because I was with family too. During my stay in Bucharest I got to stay with my uncle who has been a resident there for the past 20 years. I used to spend a lot of time with him when I was younger, but since he moved it hasn’t been easy for me to see him. So I got to combine my Street Photography days in Bucharest with some family quality time which was just perfect for me.

Moving on the the Street Hunt, we all met at the Phos Street Photography festival event location at 10:00 on the 21st of April. It was a Saturday morning. The people in the street hunt group were 5 including me. The appointed guide for Bucharest was Mihai Tiberiu Dinescu, a Romanian photographer currently living in Bucharest. In the group was my uncle Kostas Papaspyropoulos and photographers Iris Maria, Miruna Leru and later on Leontina Chiricioiu joined in. We shot until around 14:00 when we broke it up for lunch. I decided not to continue recording after lunch because I wanted to save some memory for some evening filming and for the next morning as well.

Later that night, Tibi, as Mihai Tiberiu likes being called, my uncle Kostas and Rafael Ianos a talented Romanian photographer and friend of mine and myself hit the streets after warming up with a few beers. We popped on our flash guns and gave Bucharest a test of Flash Street Photography! The flash was received surprisingly well from the locals! I really enjoyed myself that night. I might have not made any good photos, but I had the most amazing fun! You will see just how much fun in the Street Hunt video!

On day two, April the 22nd we met at the same place and time as the previous morning. This time we were more of us. Of course Tibi and Kostas were there from the previous day and night and also Ioannis Stamatogiannis, Svilen Nachev, Penko Skumov, Ventsislav Lalev, Liubomir Skumov and Paris Alexandrou. We hit the streets of Bucharest with a bang! A bunch of 9 loud Balkans laughing and talking loudly in the quiet Sunday morning streets… What fun! During that second day we covered a lot of ground. We traversed through a completely different part of Bucharest, I would say a more upscale part of the city compared to the previous day. We shot until lunch time where we wrapped the Street Hunt up.

I have left Bucharest with the best impressions. The people are warm and love to have fun! They are talkative and most of them if not all of them speak English. I was really, really impressed with how good Bucharest was with my wallet! Everything was so cheap in comparison to Greece where I live. A pint of beer could be found for ⅓ of the price you could get it in Athens and ¼ of the price you could get it in London! The nightlife was just great, full of energy and beautiful faces and of course the ladies were mostly gorgeous. I am planning on visiting Romania again, hopefully this summer if all goes well. If I do, you will be sure to know!

In this video I am using my favourite setup once again which is my good old Fujifilm X-Pro1 with my all-time favourite lens, the ever reliable XF18mm that is equivalent to a 28mm full frame lens. In addition I am using the Fujifilm EF-X20 flash. For my off-camera flashing, I am using a cord to connect my flashgun to my camera.

To record the video I have mounted a Sony ActionCam HDR-AS15 onto my camera’s hot shoe using a tripod to hotshoe adaptor that can easily be purchased on eBay or Amazon.

I wish I had the time to write a more extensive blog post about my days in Bucharest, but unfortunately that isn’t possible. I would like to say a massive hello and thank you too everyone I met during the Phos Street Photography festival and to say I am sorry if I haven’t mentioned you in this blog post. I want you all know you were in my mind when I was writing this. Sending out lots of love to all of you!

The Street Hunt lasted 2 days and 1 night! We covered a lot of ground and made many photographs. I have managed to squeeze our experience into a 55 minute video. So this is going to be a long one guys! I hope you have chilled some beers and got comfortable. Have you? Well, press play then and enjoy the Bucharest Street Hunt video!

The Collection Of Images

If you want to check out each photo I have uploaded every image I shot in a dedicated Dropbox Album called Street Hunt 27.

Additionally you can also view the photos made by Street Hunters that attended the meeting and wanted to share:

On our Street Hunters YouTube channel we also offer the Street Talk series and more interesting videos we recommend you take a look at.

NOTE: If the video doesn’t work in the website directly, please visit the Street Hunters YouTube channel to watch.