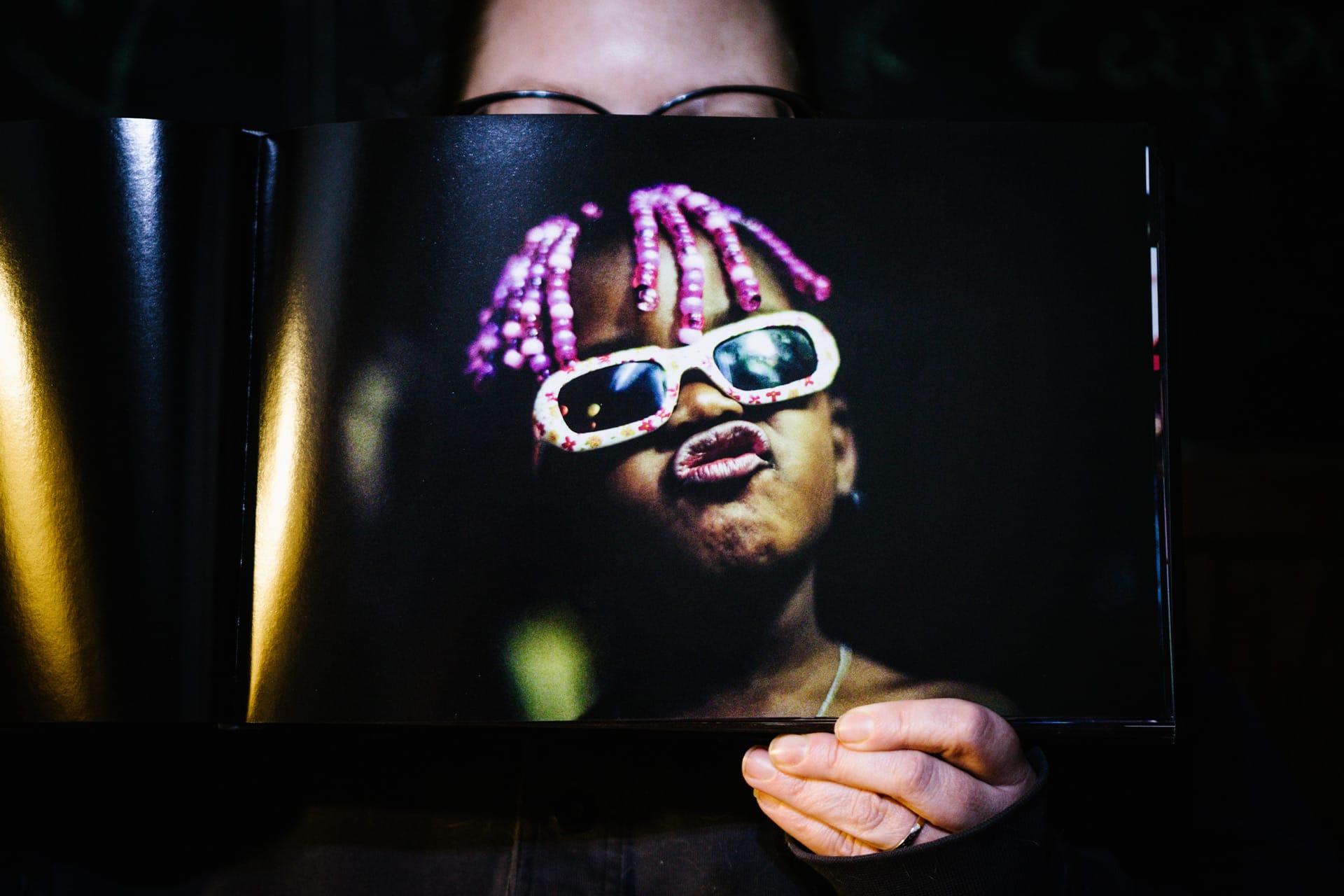 Souls Against The Concrete (University Of Texas Press, 2017) accedes to the demand in an unquestionably stunning fashion. But this collection is more than an assemblage of the photographer’s outstanding work. It is a journey into both darkness and light, territories that Allah is familiar with, as are the people in his photographs. And it is an excursion that is illuminative, stirring and ultimately fulfilling. The destination of this trip is 125th Street and Lexington Avenue in Harlem, and it is a passage made in the night. Souls Against The Concrete, at 208 pages, embodies the work of his camera ministry in exquisite fashion. 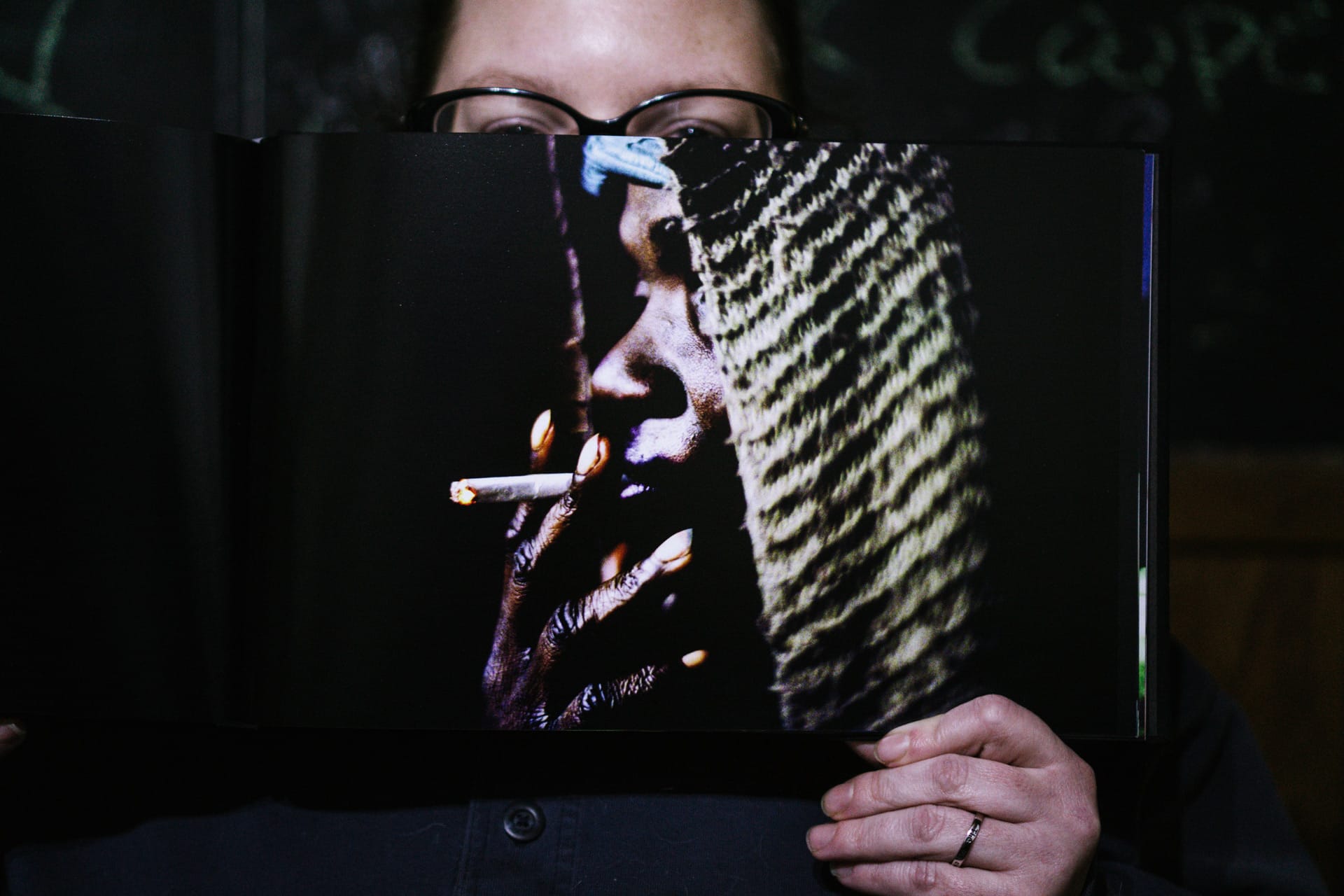 As the title implies, the book’s focus is on people, on the street. Over 100 photographs of souls grace the pages in glorious color. Although this is a photo book, and the images stand incredibly strong on their own, Allah’s self-penned essay that begins the book is essential reading. Superbly written, Camera Ministry is more than a foreword or preface found in most photobooks. It genuinely is necessary in experiencing all that Souls is. Camera Ministry provides profound insight into Allah, his work and his style. The essay starts with biographical information, his beginnings in filmmaking, his learning with the Five Percent Nation in Harlem and his unexpected introduction to photography via the Wu-Tang Clan. Allah, a self-taught filmmaker, had done a documentary on Popa Wu (Popa Wu, A 5% Story), and during the process he had become good friends with GZA, a founding member of the Wu-Tang Clan. At GZA’s request to take some photographs. Allah acquired his father’s camera, and forged his relationship with photography. 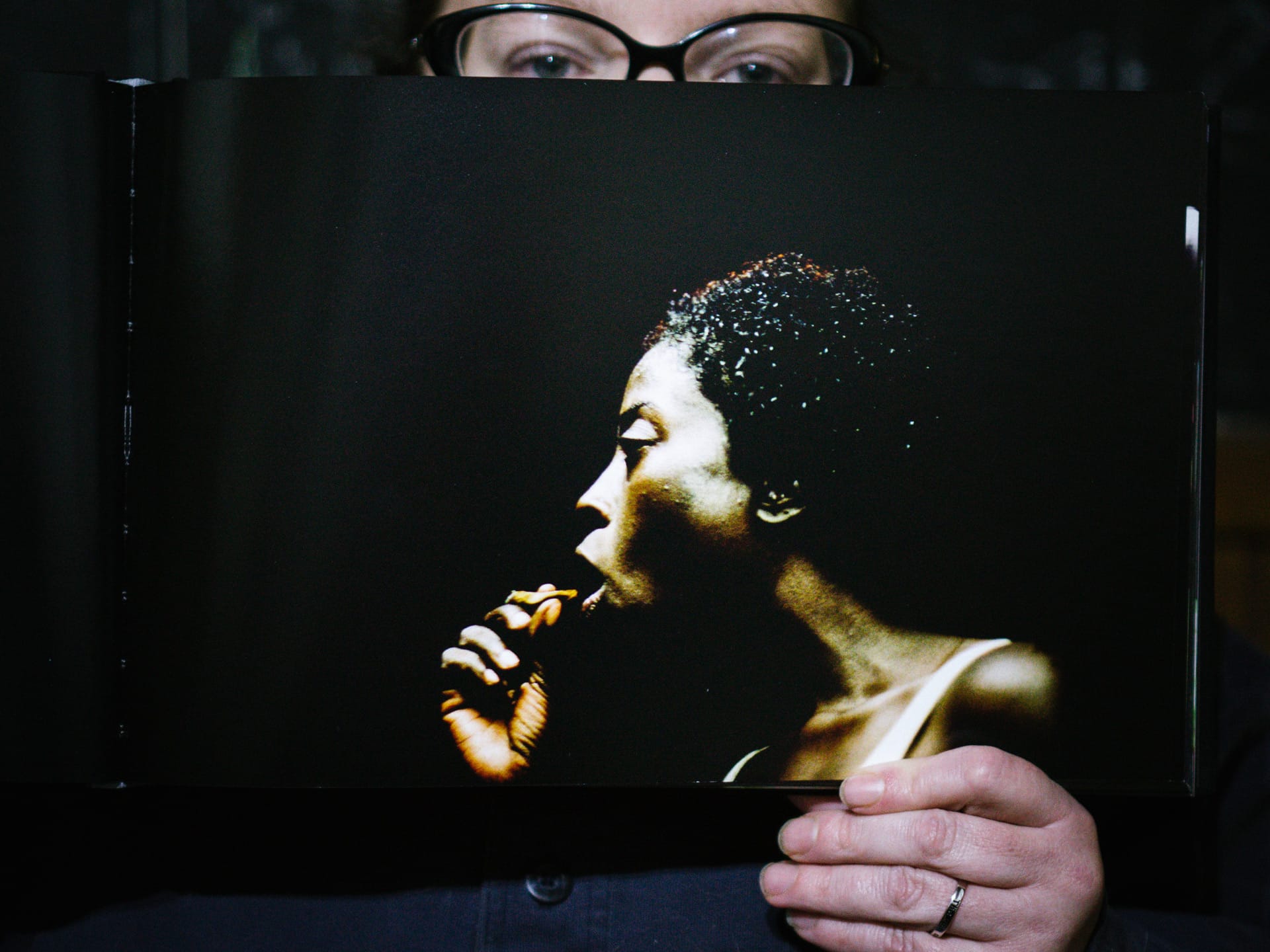 In Camera Ministry, Allah writes about his work on 125th and Lexington with incredible passion that doesn’t read as forced or contrived. It is as raw and real as his photographs, but it also connects with the deeper, spiritual level that this documentarian is on. Allah writes that, “this book is about redemption, strength, and resilience amid addiction, poverty and street life”. Allah, early in his essay, also writes that he used to avoid the corner on his early sojourns into Harlem, that his early impressions of 125th and Lexington were of “drugs, selling and using, accented by a heavy police presence, bogus arrests and clouds of smoke”. Thankfully, Camera Ministry tells us how Khalik Allah got to that corner and created the photographic connections that follow. Of how this photographer, “appointed to be a minister on the corner”, came to baptize the people there. “I felt like I was Baptizing people with Light: the Light of truth awarded to the mind that withholds judgement , because judgement always obscures truth.” Heavy stuff, but it’s also as from the gut as it gets. Many photographers are dedicated to their various projects, but how many have wrote about how they fasted all day, so they could “hit the block hungry and shoot from the stomach.” 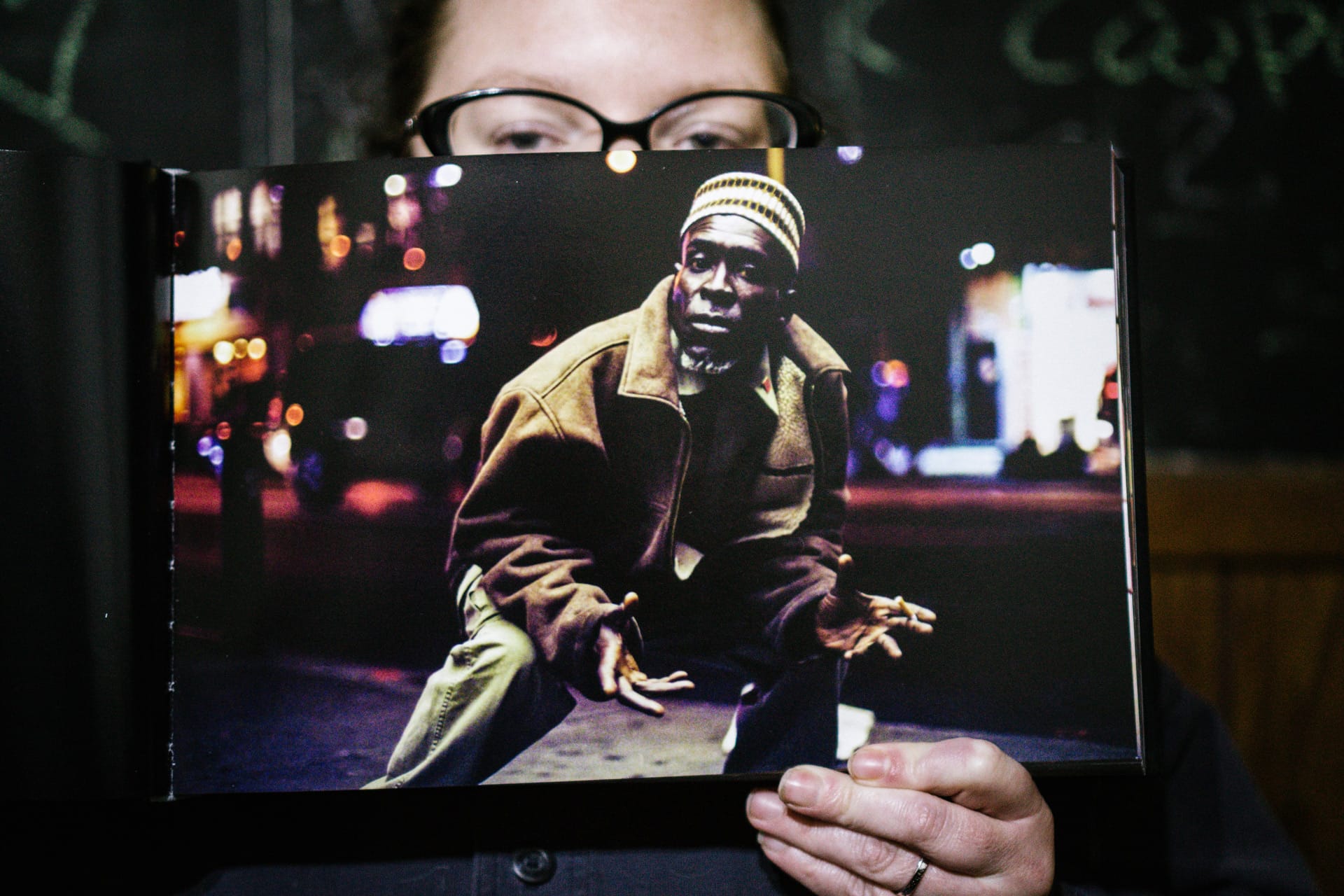 As revealing, captivating and crucial as Camera Ministry is, it is an appetizer for the photographic feast that Souls Against The Concrete serves. The gorgeous cover of a woman smoking, looking off and upward, as if she’s pondering deliverance or the redemption that Allah speaks of, gives the reader clear indication as to what they’re about to experience and to the photographer’s style. Shot on film, wide open, at night, up close and using only the available light from storefronts, signage, streetlights and the like, these souls are all touched by his ministry whether they’re aware of it or not. The subjects, mostly black, include drug addicts and prostitutes, souls we believe to be comfortable in the night, and locals to the corner. As the reader turns each page and is greeted with a new full-bleed image on the right, they opposing page on the left is blank and black. This design thoroughly complements Allah’s images. If these pages were white, the images would still stand on their strength, but the blackness of that opposing page pulls the reader deeper into the night that these subjects inhabit and keeps them there. It maintains the flow, whereas a white page would have disrupted it. However, even though the presentation is dark, and the subject matter, at times, is dark, make no mistake that this book is about light. 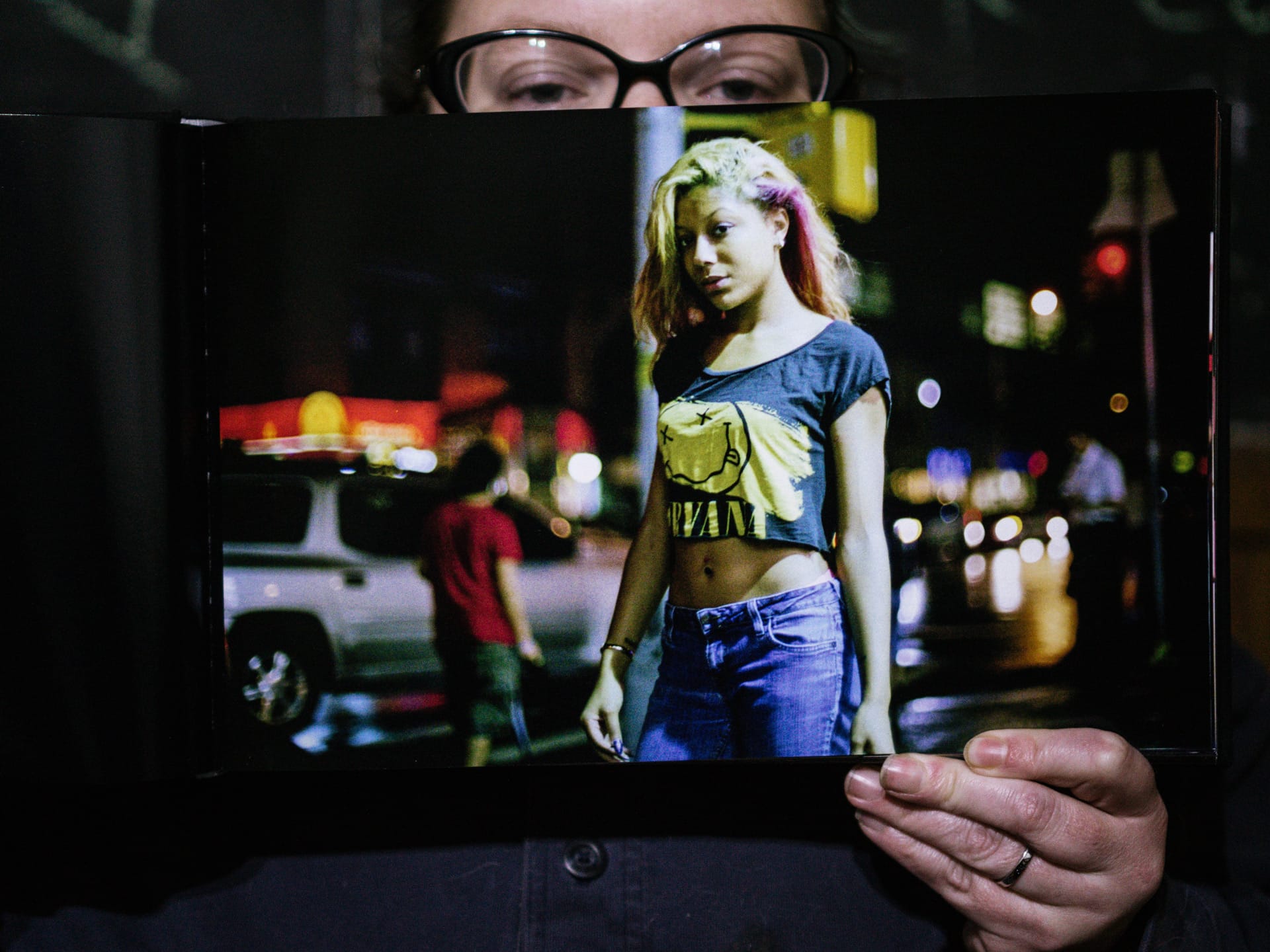 When Khalik Allah brings his subjects into the light of a storefront to be photographed, he is doing more than illuminating the person to be captured on film. It is at that very moment that the soul becomes the light themselves. The people in the photographs shine in the darkness, sometimes almost ethereal and often with the soft glowing orbs of lights in the bokeh floating like other souls lost in time. Even though these photographs are incredibly raw, some more so than others, they intensely reflect the connection that Allah has made with the people on 125th and Lexington and embody the message that these are souls that are not completely lost, at least not yet. They exist, and that is where Allah’s Camera Ministry does perhaps the most important work – documenting their existence. After looking at the images in Souls Against The Concrete numerous times, Allah’s own words about the book stick fast. 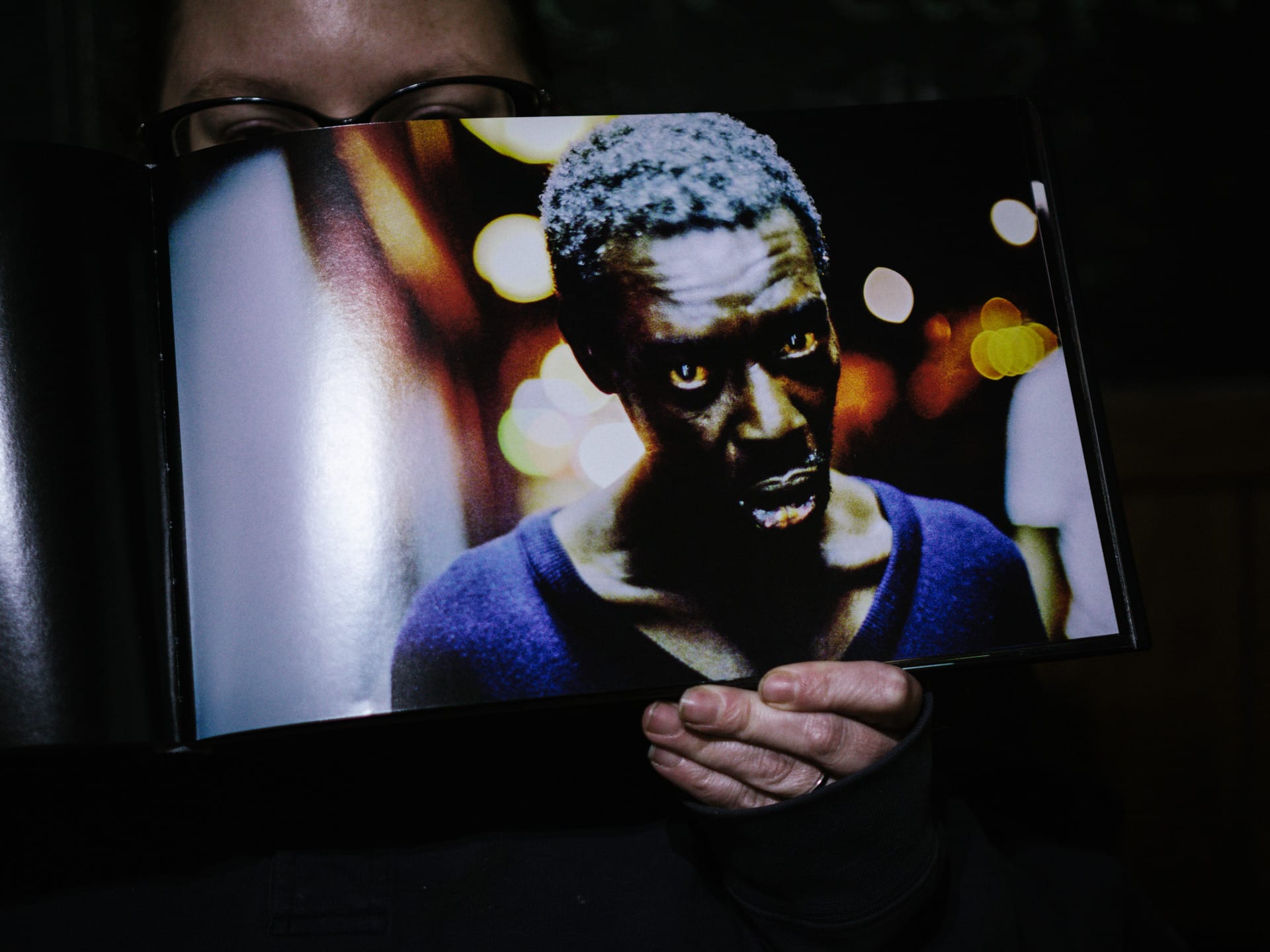 “This book is… a comment on the times and the people who birthed civilization, the great Kingdoms of Africa, and how they fell and where they have been scattered. From the Valley of Kings to drug addiction, imprisonment, invisibility, and persecution, just for having frizzled hair. A neighborhood corner brutalized by police. A fragile society opposed by society. Souls Against The Concrete – poor but happy – misunderstood by society at large but still radiating the spirit of kings and queens. This collection of portraits represents a part of black history that shouldn’t be avoided- a small part of a great legacy that should be remembered. The struggles of the world desperately call for a different perspective on the problems we face.” 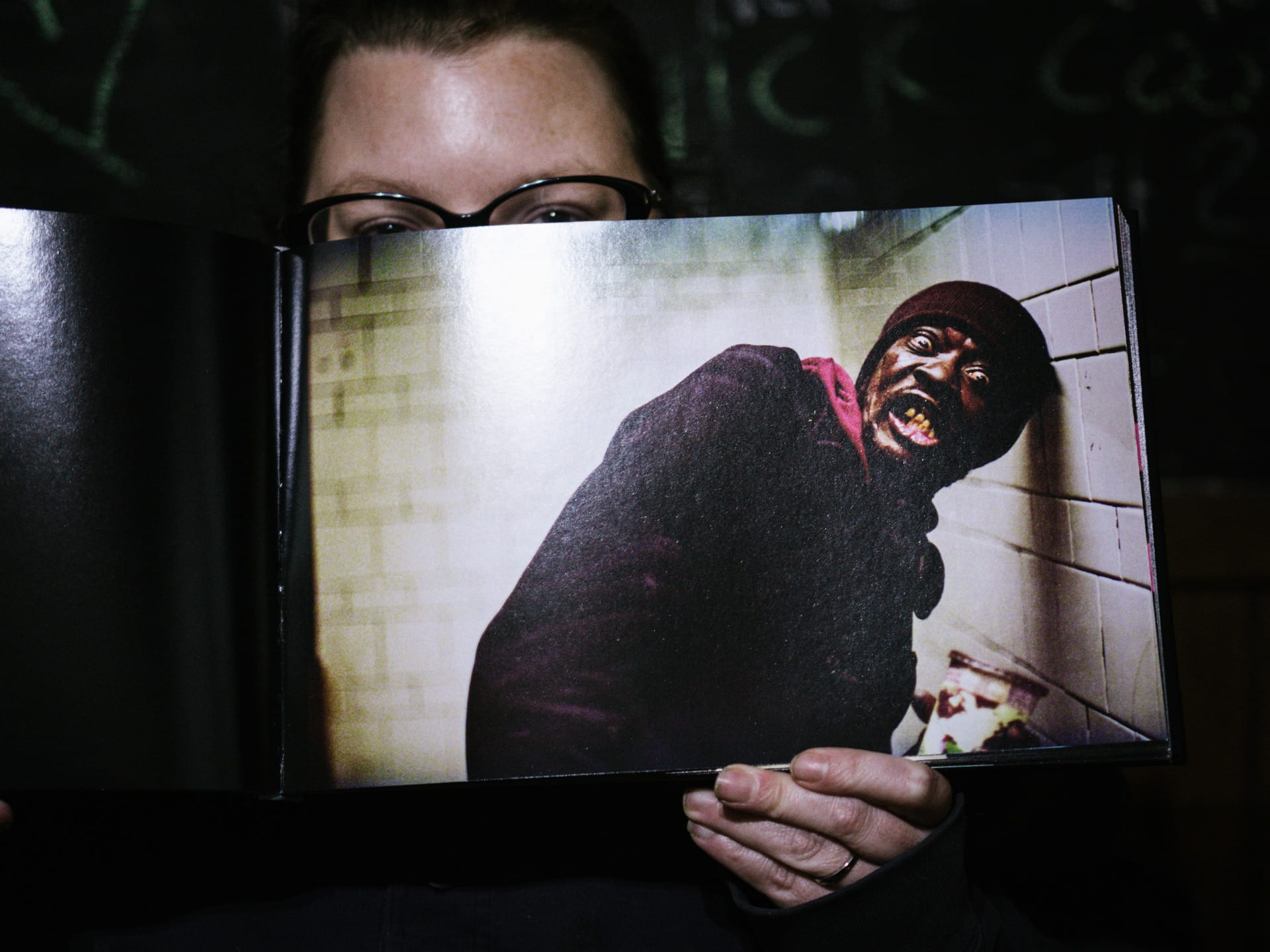 This can be garnered from viewing Allah’s photos… his work in documenting the people of this corner is done with great conviction and is matched with great skill. He knows the tools that he uses and how to capture the light in a most beautiful manner. It is compelling. There is little doubt that on the street, many would ignore or avoid some of the people in his photographs. In this book, the reader cannot and with that comes a mixed bag of emotions and feelings: empathy, sympathy, gratitude, curiosity and even introspection. The shots are composed with a master’s touch, but contain the artistic approach that is now Allah’s signature style. Allah’s flair moves his work off of the straight documentary plane and onto one where the photos become more fascinating and make it difficult to take the eyes off the page. Several photos appear to be almost impossible photographic victories over darkness, further testament to Allah’s skill and conviction. However, after spending time with this book, one comes to realize that it’s not about declaring victory over the darkness, but about darkness and light coexisting. 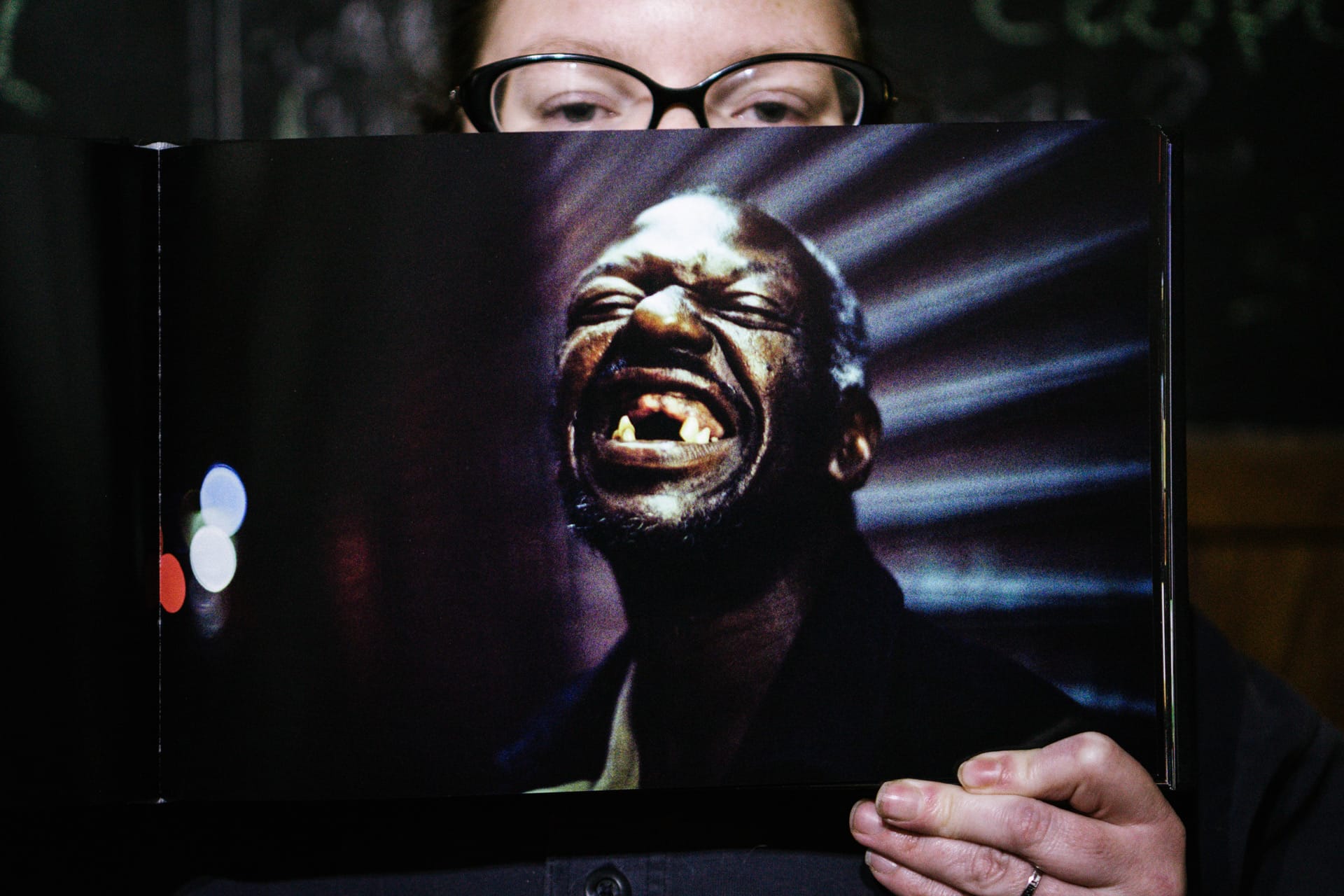 Souls Against The Concrete leaves the reader drained, but inspired. Great photo books become more than bound collections of images. They become an experience. Such is the case with Souls Against The Concrete. Rawness and beauty intersect at this corner where Allah’s ministry has set up shop and no matter whether you follow a faith or not, attending service with this book will show you the light that we all need to see.. 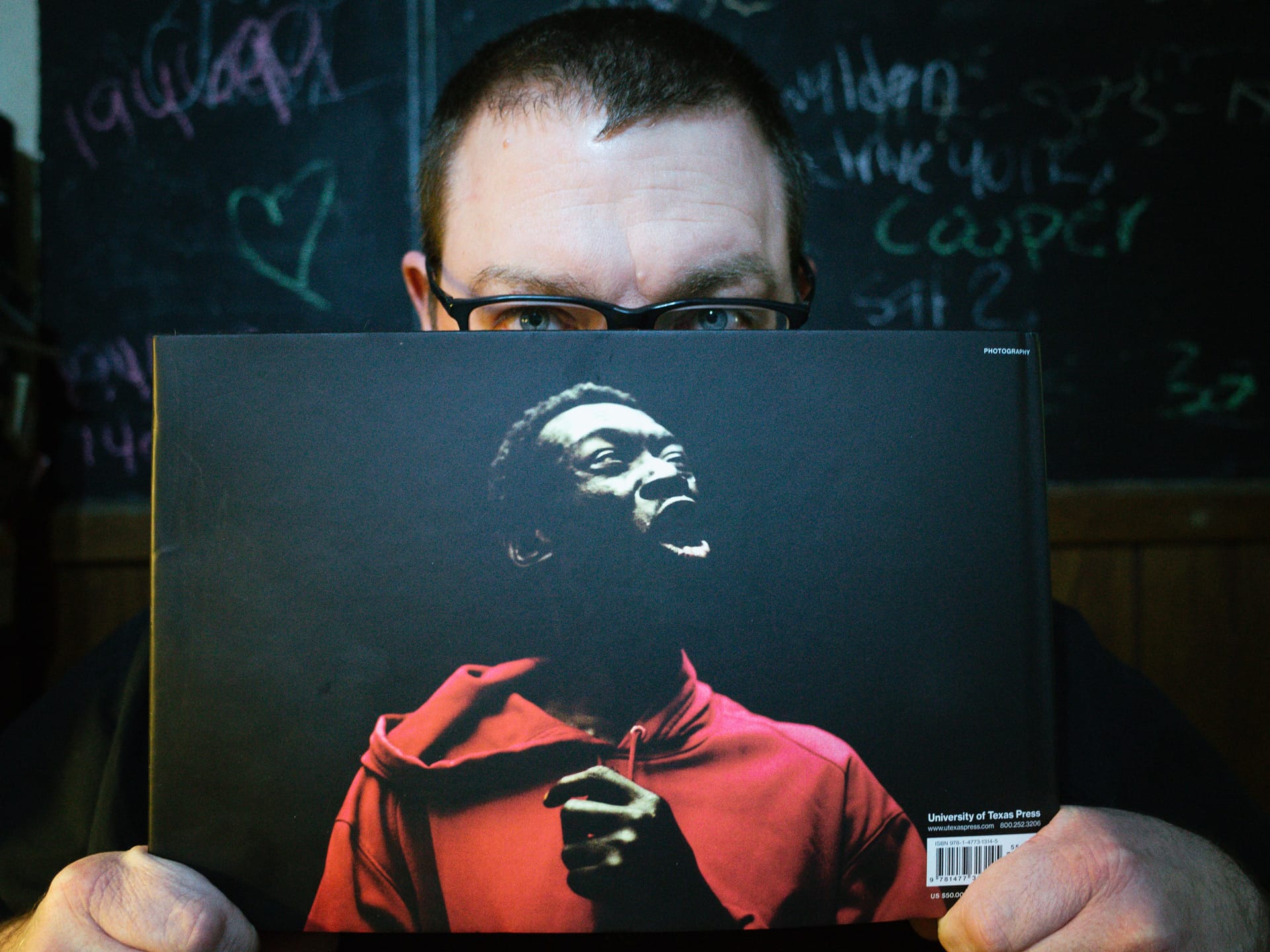