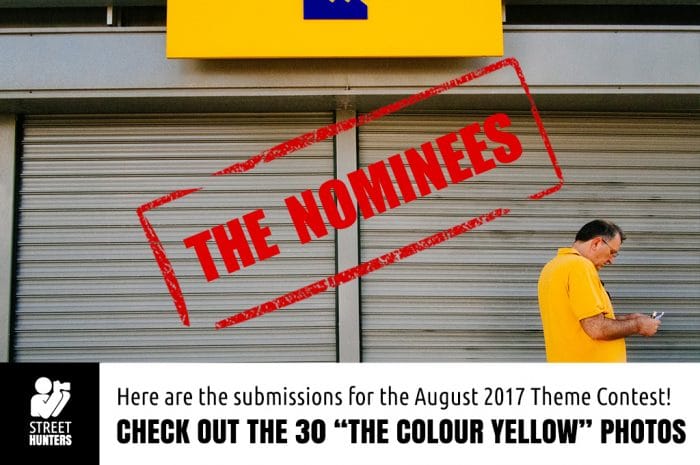 The eighth Monthly Theme Contest photos for 2017 have been submitted and we have made our choices. Please keep in mind that the process of choosing a photo from the August 2017 Street Photography Contest Submissions was quite hard!

ATTENTION: This time round we had over 150 submissions! Many good photos had to stay out because we like keeping our list short at around 30 images. So photos that didn’t meet the Theme or the Editors criteria were not chosen to be in the shortlist. They have been disqualified or removed. If your pic isn’t in the shortlist, don’t get discouraged. Try again next month!

At this moment I would like to thank each and every participant for submitting their photograph. We have a great collection of photos with “The Colour Yellow” to show you! This time we had 30 valid submissions which can all be seen below.

Here are our favourite 30 photos that made it through our strict Editors criteria!

Every month each one of us Streethunters.net editors picks one photo as a nominee. Here are the photos we chose and the reasons why:

“This month brought several strong contenders to the ring with a theme that is a “core” street color… yellow. Yellow can be found in abundance on city streets. Street signs. Pavement markings. Cautionary paint used on anything from poles, beams, steps or any number of things. Taxis! The high visibility garb of construction workers or vests worn by law enforcement officers. It is practically everywhere, so I wanted to see a clever working of it as I always do. There were several submissions that fit the bill, but this one had me in it’s grip. There’s actually four shades of yellow in play here. The yellow stripes on the train, the faded yellow grates on the platform, the yellow painted nubbed warning strip on the same platform and the bright yellow warning tape in front of it that almost matches the yellow on the young girl’s backpack. Sealing the deal is blur of the yellow-striped train against the stillness of the girl with the yellow backpack. Contrasting objects with the homogenous yellow unifying them.”

“There were several shots I could have chosen as my favourite for this month’s ‘The Colour Yellow’ theme, such was the high standard of so many of our entries. In the end I chose the street photo which I felt absolutely defined our contest theme and the colour – and then some! I love the graphical simplicity of this image, with its stark lines and punchy contrast. There’s a great mix of horizontal parallel and vertical perpendicular lines created by the garage door and the stripes on the Hi-Vis outfit. And such beautiful symmetry provided by the brace of ‘Closed’ signs too, which serve to break up the wall of negative space created by the yellow background. Plus the eagle-eyed viewer is rewarded with the nice colour linking layer provided by the silver gaffer tape and those reflective stripes (again) on the Hi-Vis, which is a nice little detail. All this going on, and we haven’t even mentioned our subject – the laser focus of his stare, and the lighting falling across his face creating elegant skin tones and shadow as he moves across the frame from left to right. Finally the pièce de résistance is his sunglasses – yellow gold of course – and so adding even more yellow punch to our scene and at the same time creating a wonderful warped reflection of those shutters of the garage door and other elements of the previously invisible street scene. Brilliant!”

“A game of shadows and silhouettes, this photograph uses a yellow wall as a canvas and selective dark areas to create a beautiful image that is nicely composed and well seen. The man’s silhouette is clearly defined against the bright yellow wall, making him stand out as the main character of the scene. What I find adds interest and value to the image is the fact that he is holding a yellow set of pages, or book. This gives the Yellow colour a more dynamic role, as it is now presented on another layer in front and in between the main silhouette as well as in the background on the wall. A very interesting shot which I think should win this month’s contest. Good job to the photographer!”