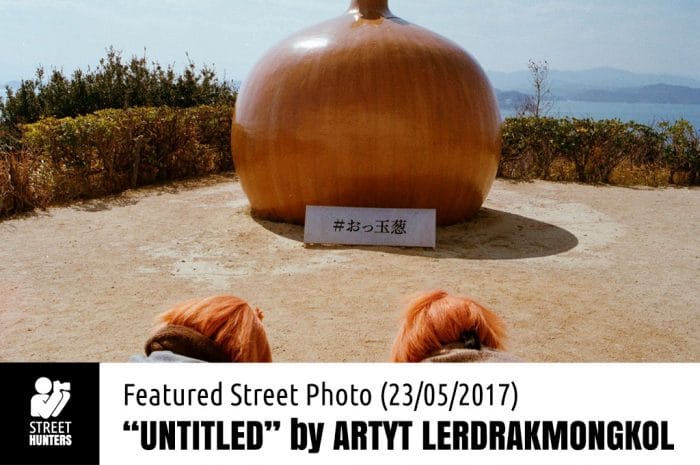 Artyt Lerdrakmongkol is an analogue Thai Street Photographer that is based in Bangkok. Besides shooting in the streets, Artyt also writes for the blog “Siam Street Nerds” about street photography and contemporary photography a website that he founded in 2015. He is also a member of the ‘Street Photo Thailand’ collective. Artyt’s love for film inspired him to open his own shop named “Husband & Wife“, a film photography & bookstore in 2014.

Artyt’s Street Photography is surreal, just the way I like it and I am not the only one that has noticed his talent. Artyt has been interviewed already by the EyeEm.com website and Lomography Thailand and has been selected by theculturetrip.com as one of the Thai Photographers To Watch Out For in 2016!

This photo just hit me like a speeding bullet! Bam! As soon as I saw it I was told myself “this is so funny and so surreal I just HAVE to share it with our Readers!” and so I am. I don’t think I really have to elaborate as to why this is a very good photo, but I will do so, just in case you haven’t spotted the obvious, which I find highly unlikely. So, in this photo we have a massive orange onion sculpture right in the centre of the composition and further down we have two, what I assume to be, girls with their heads bowed down. From their position, I would say that they are bowing down to the onion. What is so intriguing though is that their hair is the same colour and shape as the massive onion and their jackets, especially the one on the right, is quite similar to the ground the enormous onion is resting upon. Their placement in comparison to the humongous sculpture creates a triangular shape, with each one of its 3 corners featuring an orange onion shaped object, either a head or the big onion. How awesome is that?! I love it!