The Street Hunters Monthly Theme Contests for 2017 are off to a fantastic start! January and the Zebra Crossings theme featured Roy Rozanski’s superbly timed shot. February’s challenging Surrealism theme was seized by Kristof Vande Velde and his otherworldy blue-flame-head photo. March threw down the gauntlet with a theme challenge that is near and dear to us at Street Hunters HQ… Flash Street Photography!

Yet again, we were flush with quality entries and choosing a winner was no easy task, even when we narrowed the finalists down to three. Flash is becoming more and more popular in street, you can see posts featuring it appearing more frequently on social media feeds and online galleries and portfolios. And Flash Street Photography has been covered quite often here at www.streethunters.net. We wanted to see a great street photo that was blasted with light and punched us right in the eyes. We got punched, alright, and it was Christoph Wuzella who delivered the knockout blow!

Chistoph lives in Vienna with his girlfriend and their Corgi, Sherlock. The photographer also sells cameras at an electronic retailer part-time while studying business management at college, majoring in product management. Whatever precious free time he has left, he tries to get out and shoot! Most recently, he’s done a short series about life around the “Wiener Gürtelbögen“ (they are viaducts of the old Stadtbahn transit system) for Punkt! Magazine.

After the interview, be sure to follow the links to see more of Christoph’s work and follow him to see what he might hit you with next!

A quick reminder, we’re awarding the winners of each Monthly Theme Contest with all the exposure we can deliver! The exposure comes in three ways. First, the announcement post, which proclaims the winner of the contest and showcases their winning image. Second, an interview feature with the photographer. And third, a YouTube slideshow of their work. The feature posts will remain on the web for as long as Street Hunters exists!

The photo was captured at dusk at the, as the Viennese call it, “Wurstelprater“ (lit. “Clown’s Prater“), an old fashioned amusement park in Vienna.

As I was strolling along the old booths, I walked by these guys who were hitting this punching bag machine like crazy. So I snuck around a little and tried to get a good shot – more or less unnoticed (which is basically a mission impossible anyways when you’re working with flash).

So after I took this first shot (definitely not a keeper btw), they noticed me and asked what I was doing. I started talking to them a bit and explained to them what I was doing. They were completely cool with it and told me to go ahead. This gave me a great opportunity to step in much closer. At one point I was so close, I felt the air of the swinging punching bag breeze by my face as it almost hit me 😀 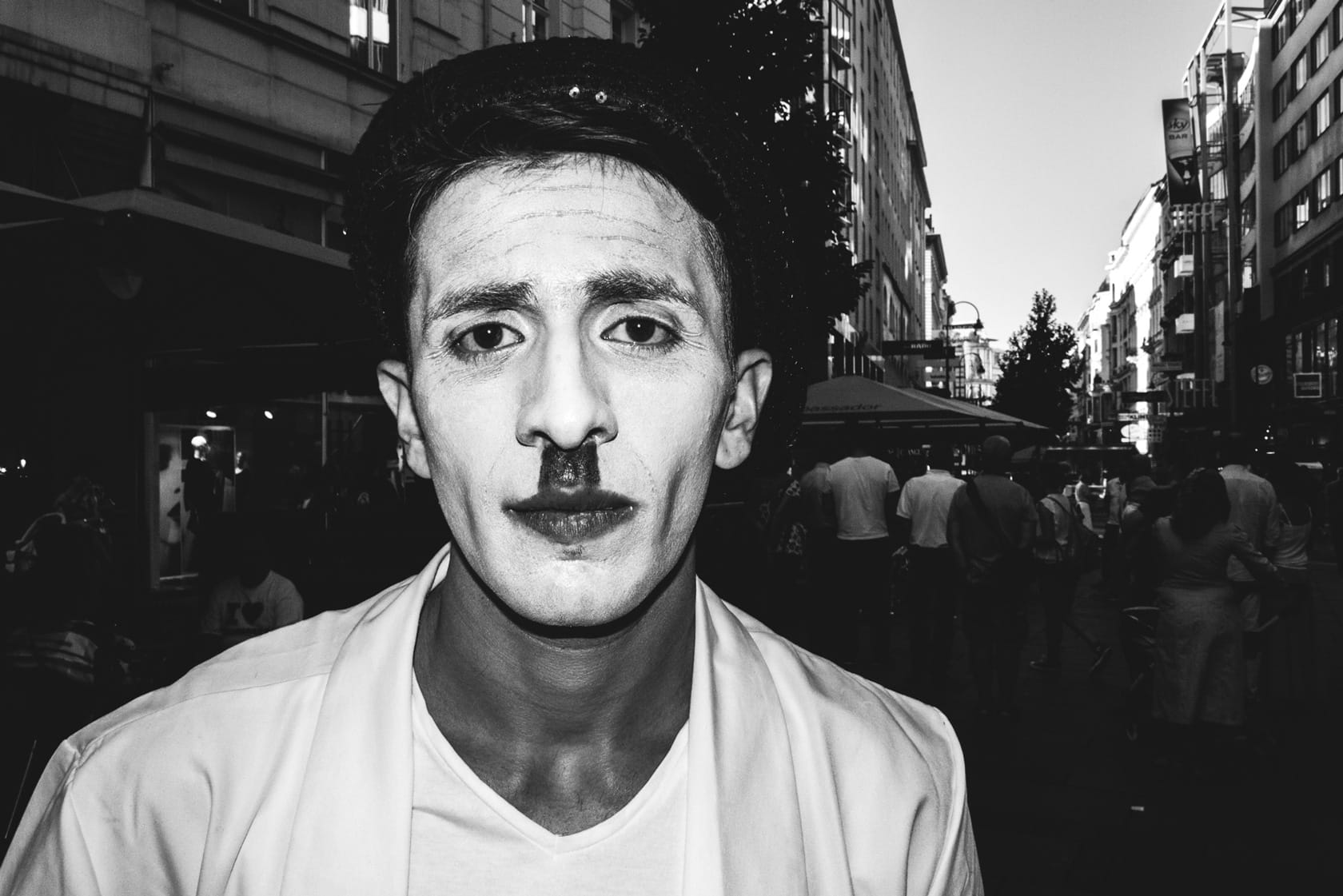 Nope, not really. I guess I started to experiment with this technique about two years ago. At this time, I adopted photography on a more regular basis as a hobby as I grew more and more passionate about it. Before that I was more of a “now and then“ kinda shooter. 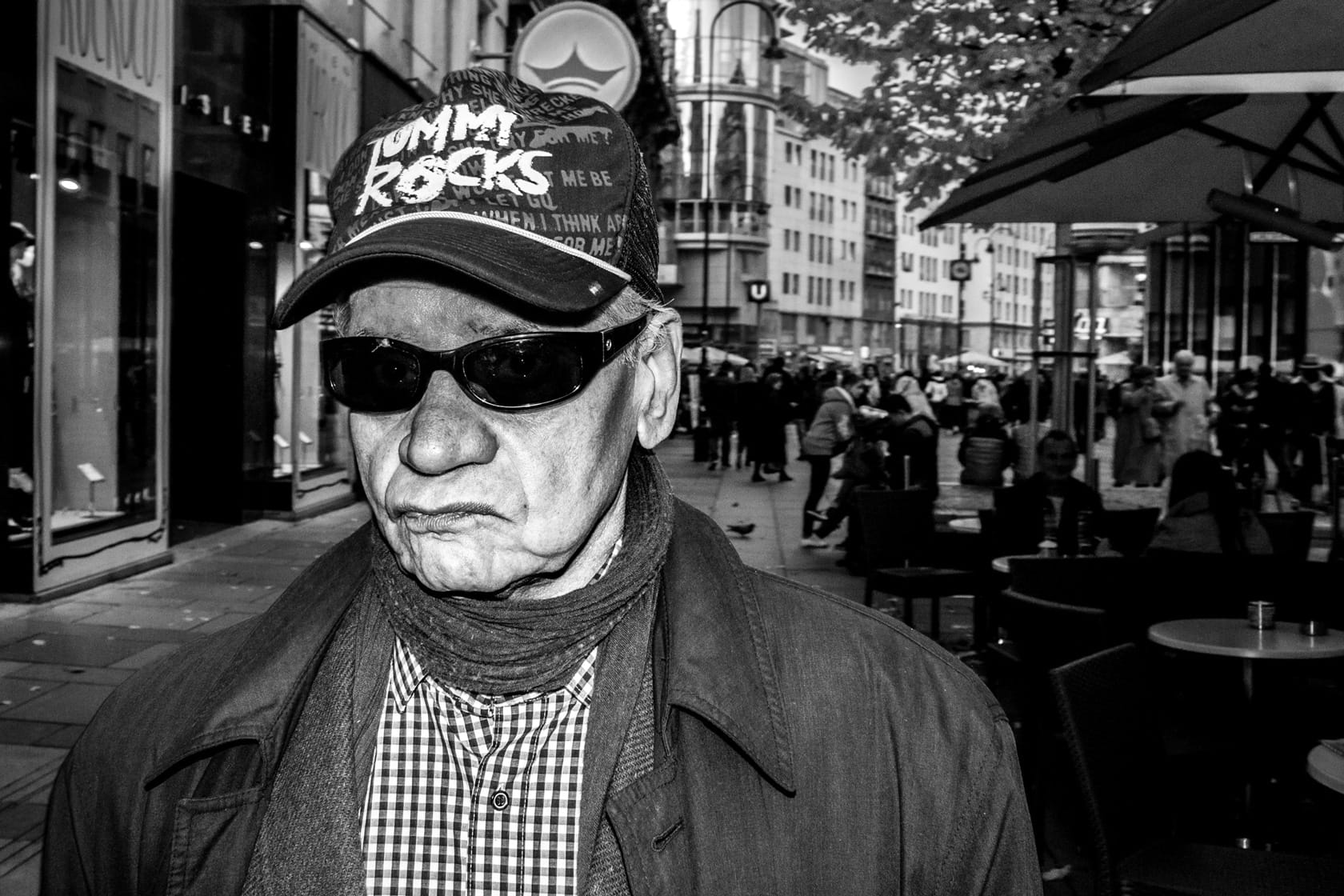 I guess everybody has one’s own set of photographers in mind, who inspired or influenced them at one point. In my case and in regards to flash street photography, it was Bruce Gilden. In particular, his fearlessness and his way to “reduce“ a scene simply to the people and their expressions.

I’ve been shooting street regularly for about two years now. I can’t really say that something special drove me to shooting life on the streets. I guess, I’ve always found the idea of freezing moments of life intriguing. Nowadays, I don’t consider myself a “pure“ street photographer. To me that would feel like restricting myself from doing certain things by putting a label on the pictures I take. 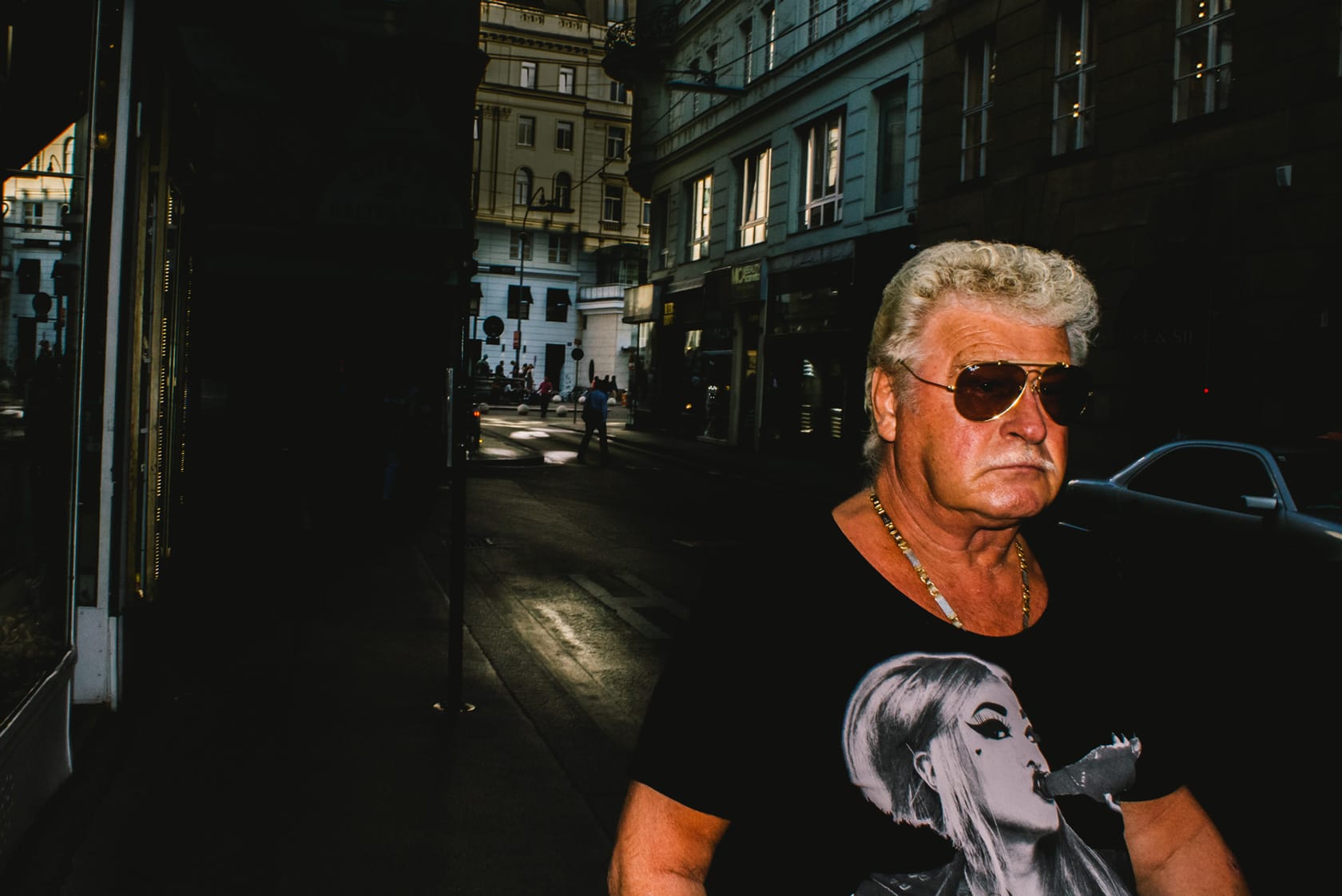 I like the mood that comes with monochrome. You can go from smooth to harsh contrast. It’s about forms, the scene, its aesthetics. To me it feels like that mono takes away a lot of the noise color can create.

I still love monochrome, but lately I also started to experiment more with colors. My angle here is – if color adds something to the composition or mood in the photo, then it would probably be a bad idea to reject it. 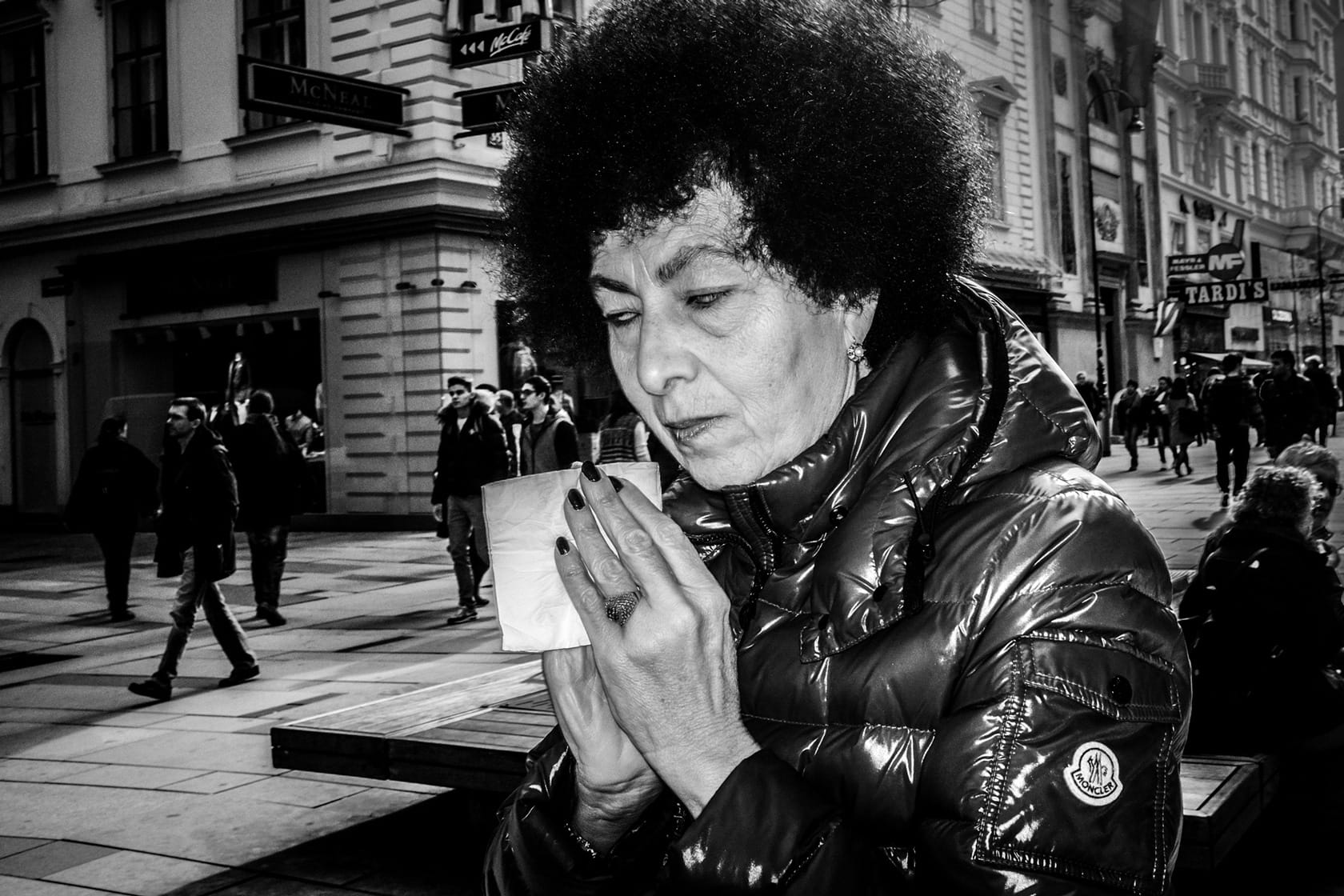 Yeah that’s right – a real chunk of my photographs are from Vienna. The main reason is that I live here and although I’ve lived here for quite a while, I still can’t shake the feeling that I know almost nothing about this city (at least from a street photography point-of-view) and that presents something really interesting for me to explore.

Vienna has much to offer for every kind of photography. The city is very diverse and generally the Viennese walk a fine line between being overly fancy and being overly aggressive. Someone once said: Vienna is the right mix between “Küss die Hand“ (like the French “enchanté“) and “Geh in Oasch!“ (lit. “go to ass“ and is the equivalent of “fuck off“). And that is exactly what I love about Vienna 🙂 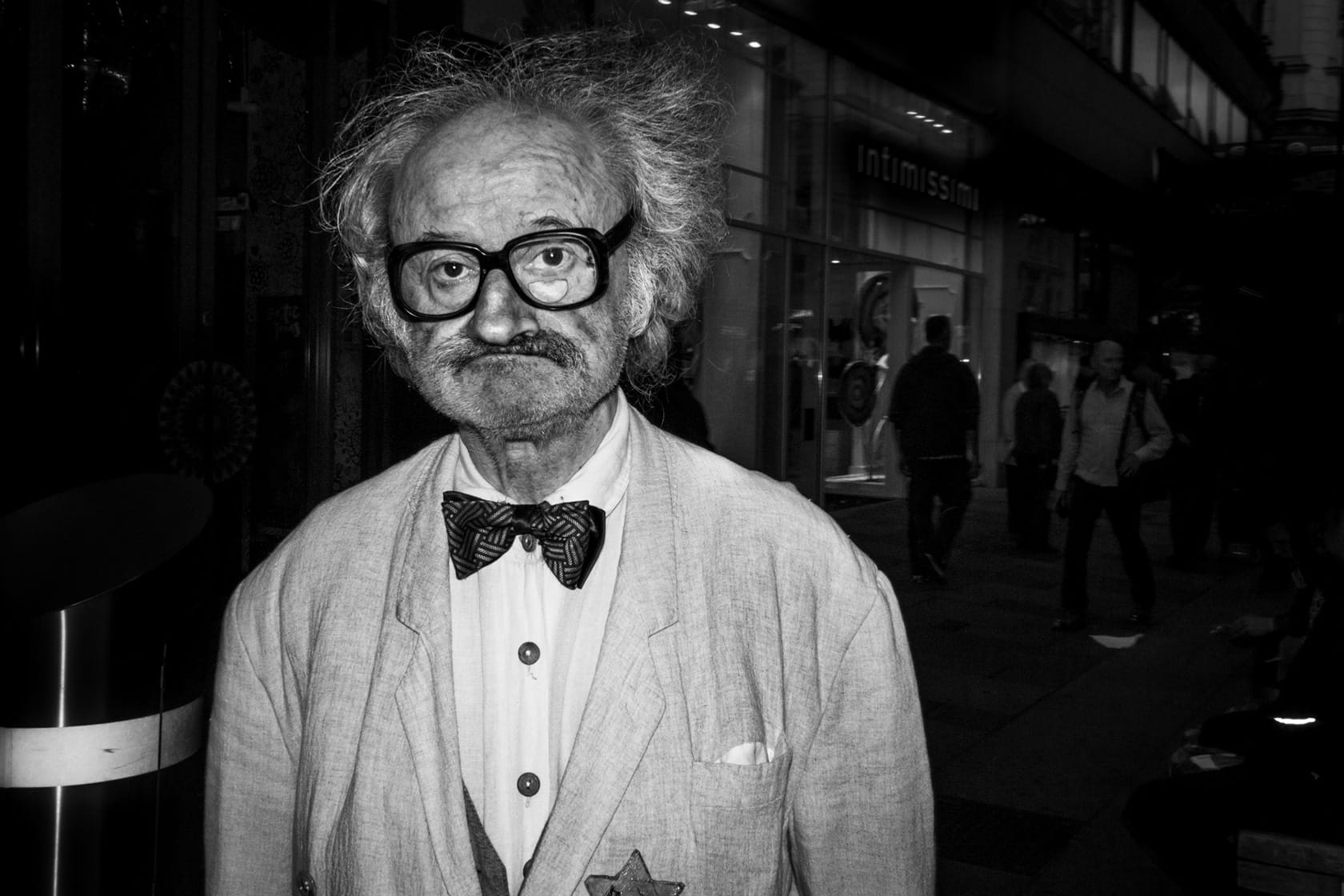 Honestly, the closeness was not my main concern. I like wider angles like 35 or 28mm. But the combination of close range and flash presented a challenge for me. Because there is no option of silently retracting yourself from that situation after firing the flash. I took a few photo walks to get into it and shake off all the hesitation. After a few keepers, you get kinda addicted to this little thrill. I also tried not to just spray and pray. 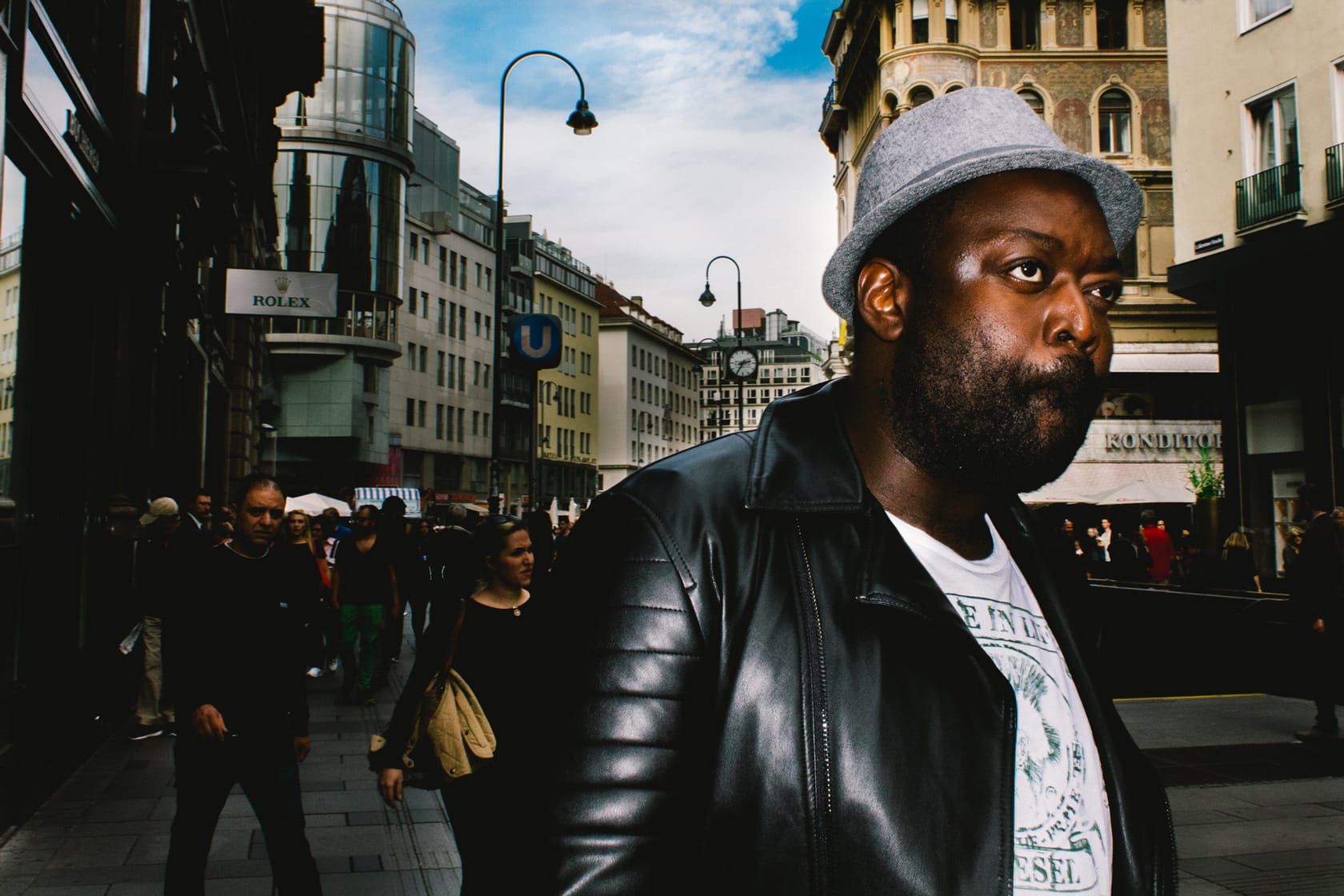 Almost never. For me, it worked out most of the time to leave the scene with a smile and a thank you. Besides some questioning looks, there was one situation, where a girl with blue hair said “that was kinda creepy, you know“ after I tried to take a close-up of her piercings. And once there was a lady who approached me and said I’m not allowed to photograph her. She wasn’t even in the frame, so the discussion ended quickly.

Not yet. Vienna is my main location to shoot. I was in Sarajevo, London and Paris within the last years, but my serious interest for street photography and photography in general came after that. So I definitely have to go back there some time for another take on those cities. 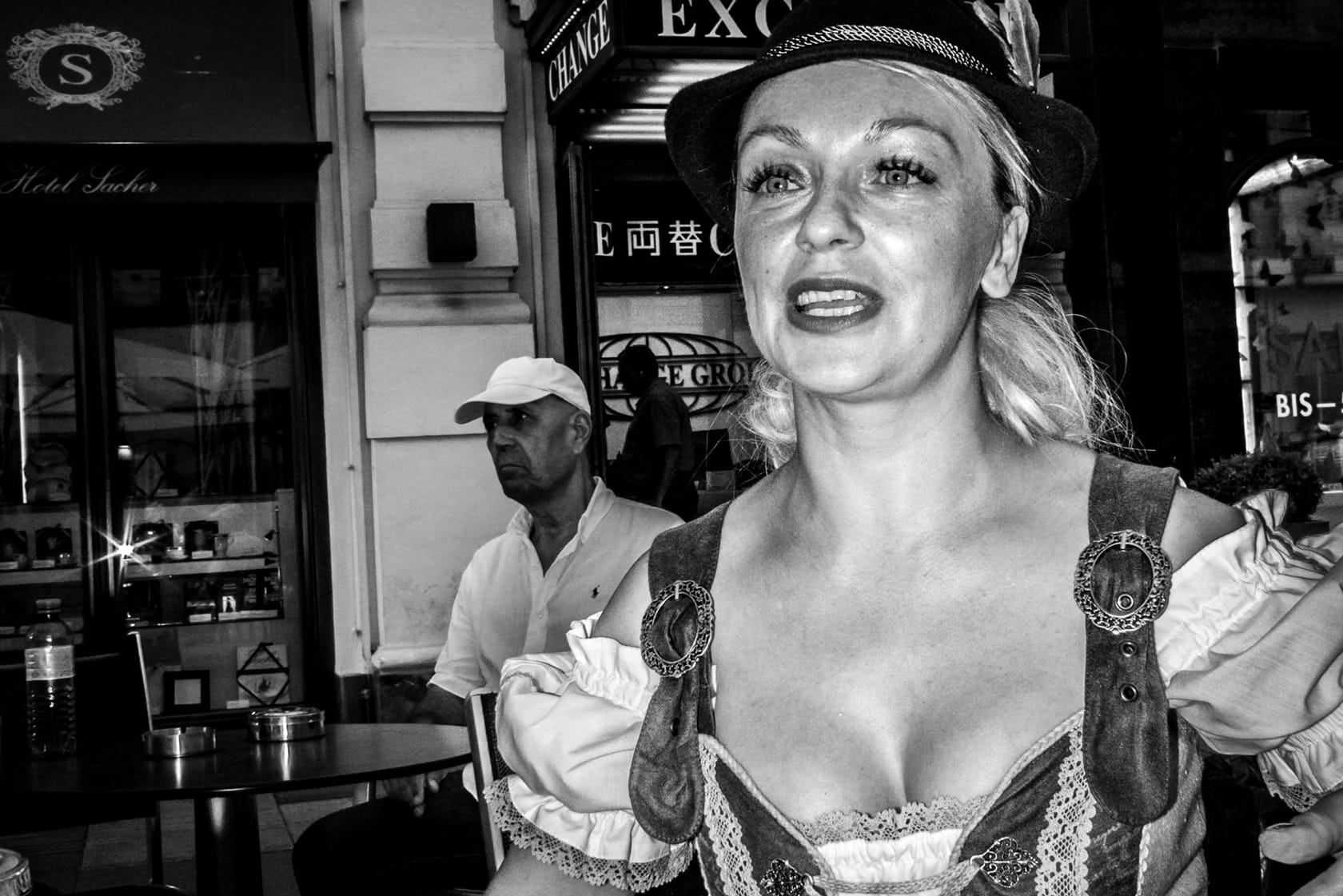 I don’t shoot strictly street. I actually began to develop a liking for the documentary approach. Not too long ago, I photographed a band in their studio while they recorded a new album. It was fun to be behind the scenes and really build a connection with the people for once, rather than being just the anonymous observer.

The project I did for the magazine was more of a street thing, but it still had a certain theme and an objective. Putting images in sequence, to a point where a concept comes in, is a challenge I want to pursue more in the future. 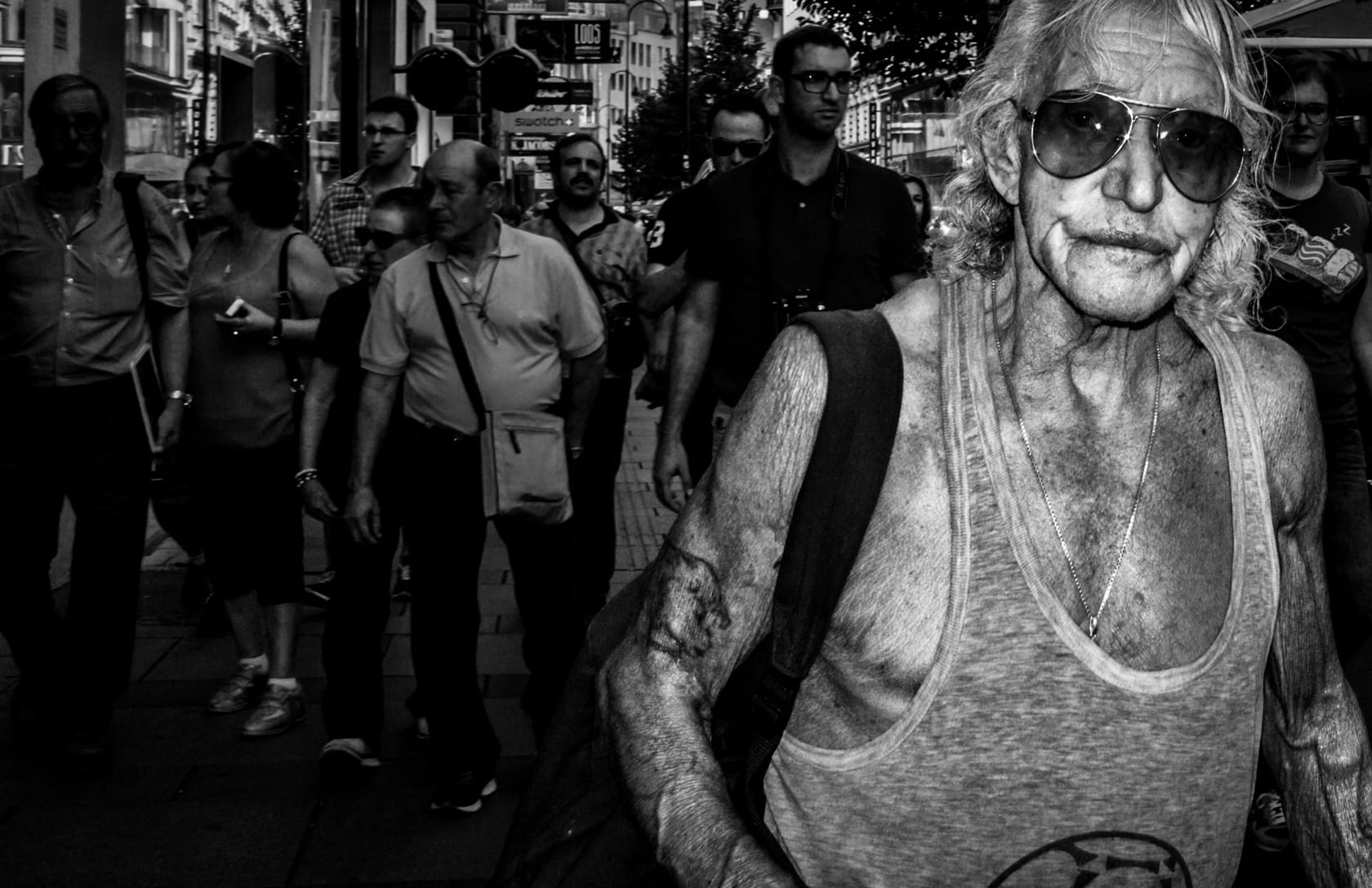 I shot a long time with a Canon Rebel T3, which I still use on occasion. But since I got my X100T, I have to say it’s by far my favorite.

I like the fast, fixed 35mm lens, its compactness and what attracted me most was, the usability with its dials and buttons. Moreover, the black version of the camera is really discreet. I have it with me 95% of the time. I try my best to follow the mantra: always carry a camera. 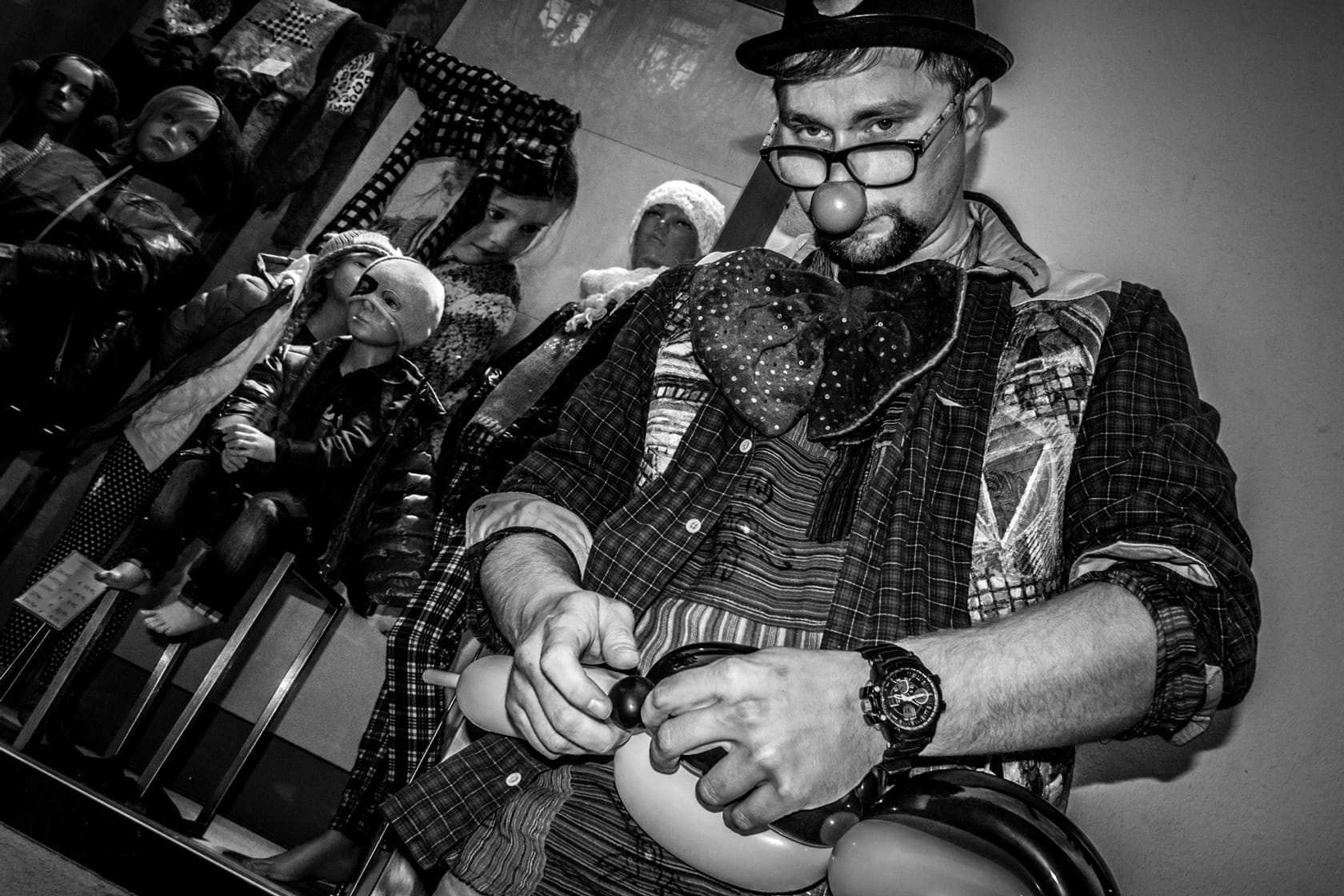 I will continue to pursue street, for sure. You can’t just stop walking the streets. I definitely want to experiment more with color in the near future and plan to do some projects instead of single images, once I’ve got more time after finishing college. 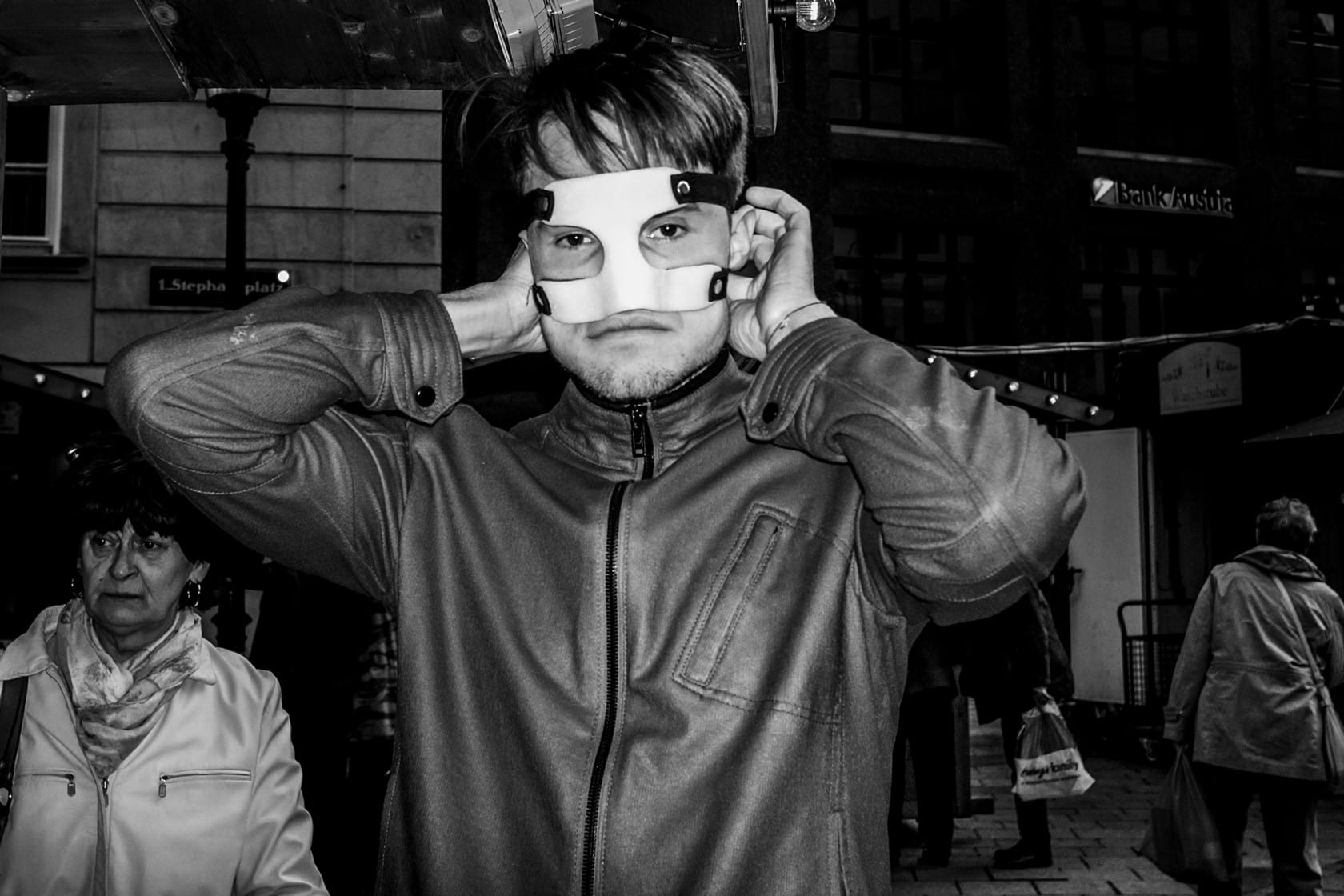 Where You Can See Christoph’s Work