NOTE: This is a Guest Blog post written by Hamish Gill from 35mmc exclusively for www.streethunters.net.

Street photography – at least as I think it’s commonly understood – is something I wouldn’t ever say I aspire toward. For a start, I’m not sure I really know what street photography is! It’s such a broad term that seems to get applied to such a vast array of different sub-fields of photography that it’s quite hard to put a finger on.

To my mind, what most people – or at very least the layman – think of when they hear the term street photography is probably closer to the output of the likes of Bruce Gilden. But of course this isn’t really that accurate. The broader field of street photography seems to have laid claim to all sorts of sub-fields of photography. Take Fan Ho for example. I’ve repeatedly read of Fan Ho being classified as ‘street’, but look at his most famous works, and then compare them to Gilden’s. Unless you’re some sort of history of art type with a masters in bullshit, you’re probably going to find it quite hard to find much parity. Both shot/shoot a lot of black & white, both are highly regarded within their respective sub-fields of street photography, yet in pretty much every way they are different in terms of style and output. Gilden is brash and heavy handed, whereas Ho was contemplative, and produced work that feels gentle and light in its touch.

Not only is the field of street photography broad, but also – perhaps because of so many of the greats being easy to classify as such – it’s a very difficult field to find solid a footing within, never mind master. It’s gotta be incredibly difficult to do anything that stands proud amongst so much incredible work. In fact, the moment you classify yourself as a “street photographer” you’re automatically classifying yourself amongst such a vast sea of greatness, where do you even start to attempt to make a mark? 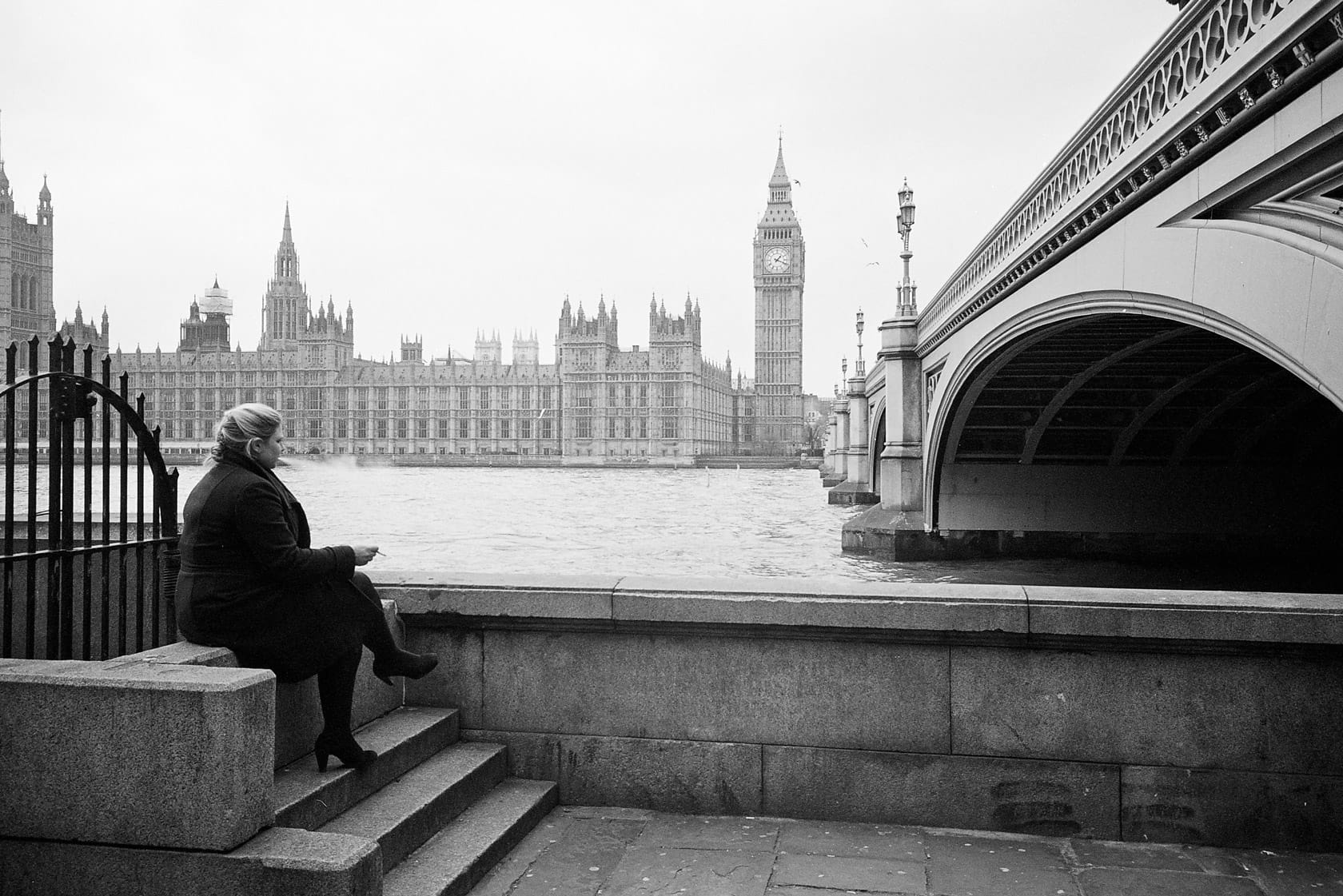 Ok, you could say the same about calling yourself a landscaper. By the merit of what I’ve just said, if I then went on to claim my primary output was landscape, would I not be holding my work up alongside the likes of Adams? Perhaps I would, but somehow street photography is different; street photography is much more popular, it somehow seems to have an ability to give a photographer some sort of credibility; it’s a little ‘edgy’, and dare I say ‘trendy’. Landscaping is not so much of any of these things is it?

Street photography also seems to come along with much louder voices; voices that sometimes feel they’re shouting to get heard amongst the dirge. It seems to have more forthrightness, more strong opinions and more experts. Many of these experts will impose, or at least recommend such aspirations as “strong narrative”, and “facing your fears” in your approach to taking and creating images as part of the path toward greatness.

Ok, so I might be exaggerating a little, but whether street photography really is like this or not, it’s how I see it, and frankly I find it all a bit much for my brought-up-in-the-countryside ways. But, before you wave me out of the room as some sort of imposter, let me just point out that actually this viewpoint gives me a little bit of a sense of awe toward anyone who would call themselves a street photographer. It’s a big chunk of commitment to associate yourself with all of that stuff, and I can’t help but admire those who do… Especially those of you who are actually good at it too!

But, as I’ve mentioned, I completely lack any desire towards explicitly associating myself with the field. So what – you might ask – am I doing writing a post on a website called Street Hunters? 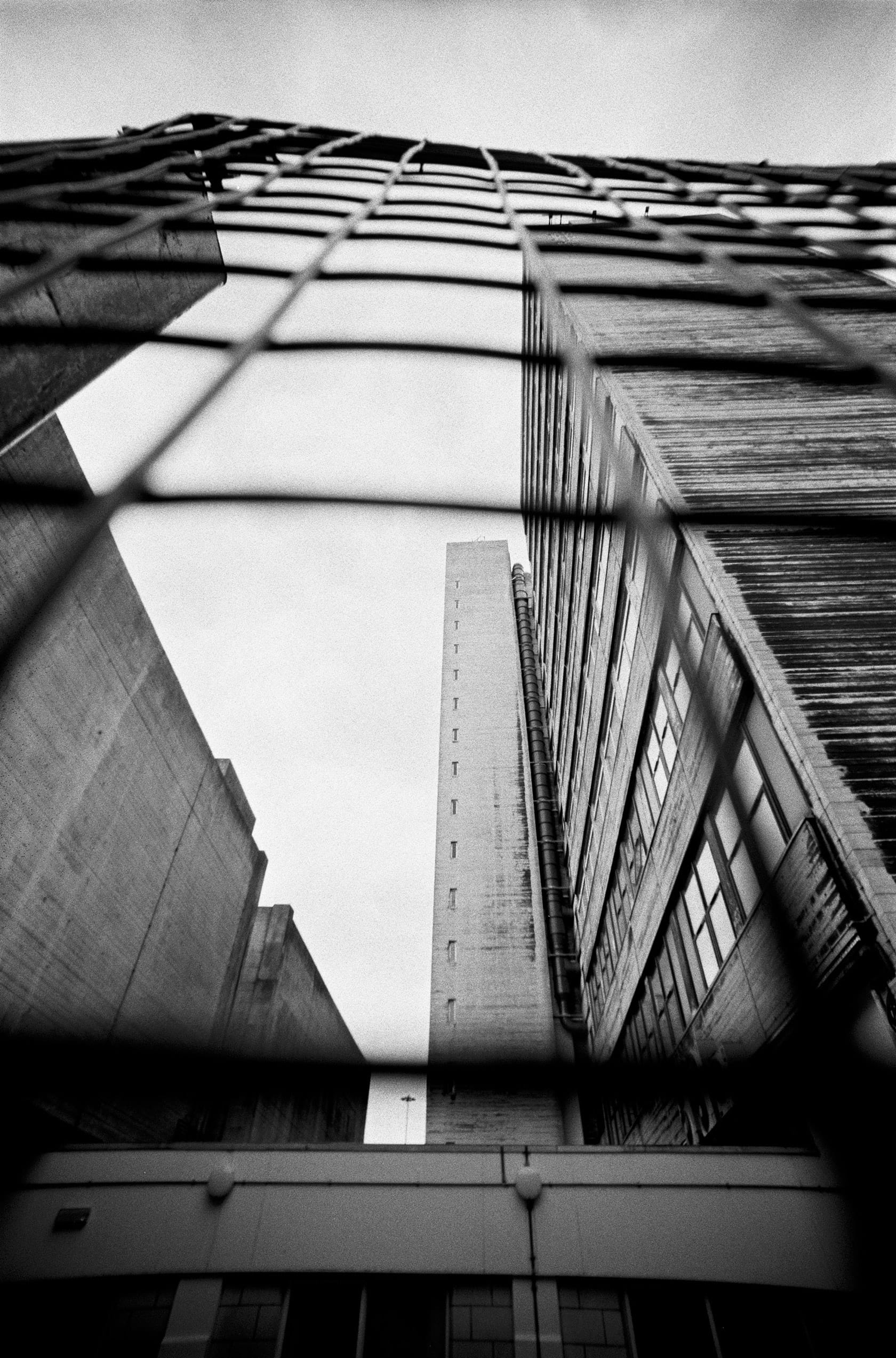 Well, despite these feelings toward “street photography” I quite like taking photos in urban environments. So since I was asked if I might like to write something for this website, I thought I’d take the opportunity to pen something that I hoped might speak to a few other people with a similar stance as me; those who share a similar sense of being a photographer who takes photos in an urban environment, but at the same time might not feel akin to other ‘Street’ photographers, those who might not wish to “face their fears”, and indeed those who might not want to worry about necessarily creating a “strong narrative”. I’m hoping there are a few people out there who are like me, who see urban environments as rich pickings for satisfying shapes and angles, and see people within the frame as little more than useful for scale or simple adding something to the composition. 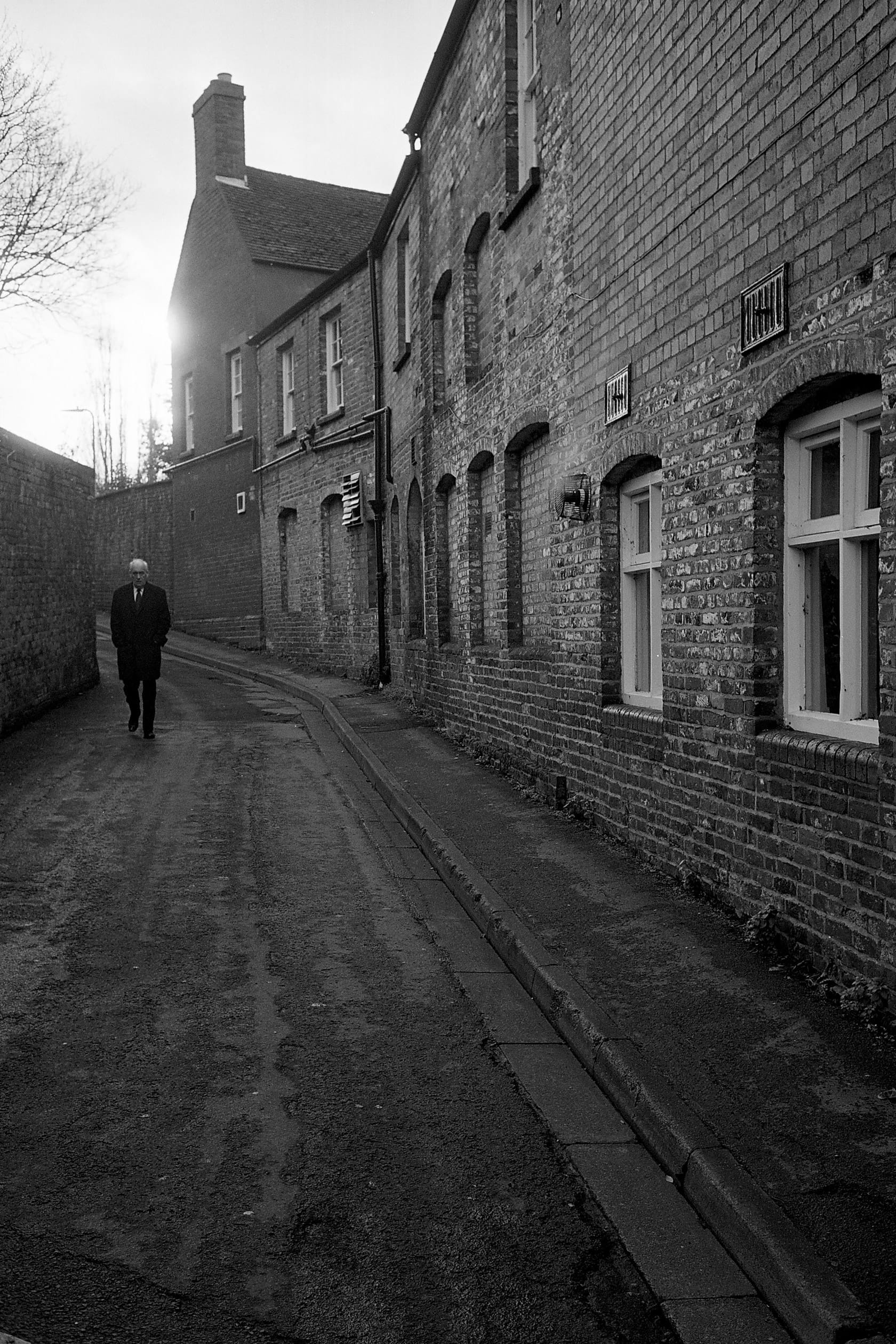 This is what I personally call “reluctant street photography”, and the following is a few tips on how I am learning to embrace and enjoy it! It is, if you like, a few tips about how to be a photographer on the streets, without needing to be a full blown “Street Photographer”.

The beauty of not being a full blown street photographer is that you can let what the experts advise about street photography blow over you. Just think of all those slightly invasive photos of people that you don’t have to take!

Also, if you’re not attempting to be the next great street photographer, you can forget about what preconceptions you might have about what you should be taking, and just take photos of the things you see. This is a really positive step towards simply enjoying doing it, rather than worrying about whether or not you’re shooting good “street photos”. 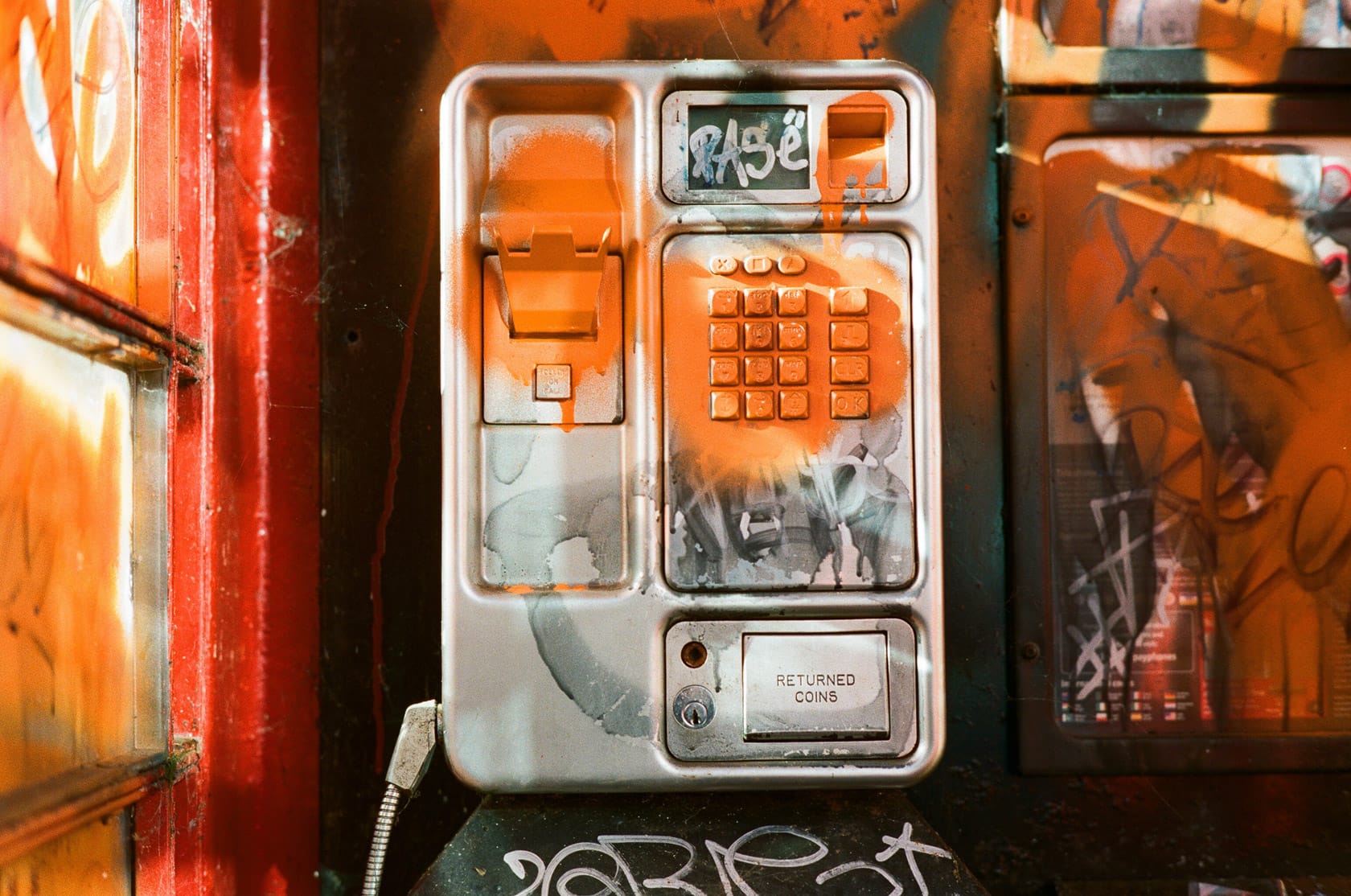 Ultimately, my view is that you’re probably not going to be the next Bresson! Don’t get me wrong, I’m not suggesting you stop trying, but if you can concentrate on shooting for yourself in your own style, and not in a way that you hope might impress others with your fearless behaviour you might stumble just onto your own style!

That all said, I think it can be of value to explore the archetypes. I get a little wrapped up in the idea of archetypes; photos that feel so derivative that they border on copyright infringement. I take them sometimes and find the process satisfying – you know the sorts of images I’m talking about, right? Padlocks, reflections in puddles, moving cyclists. 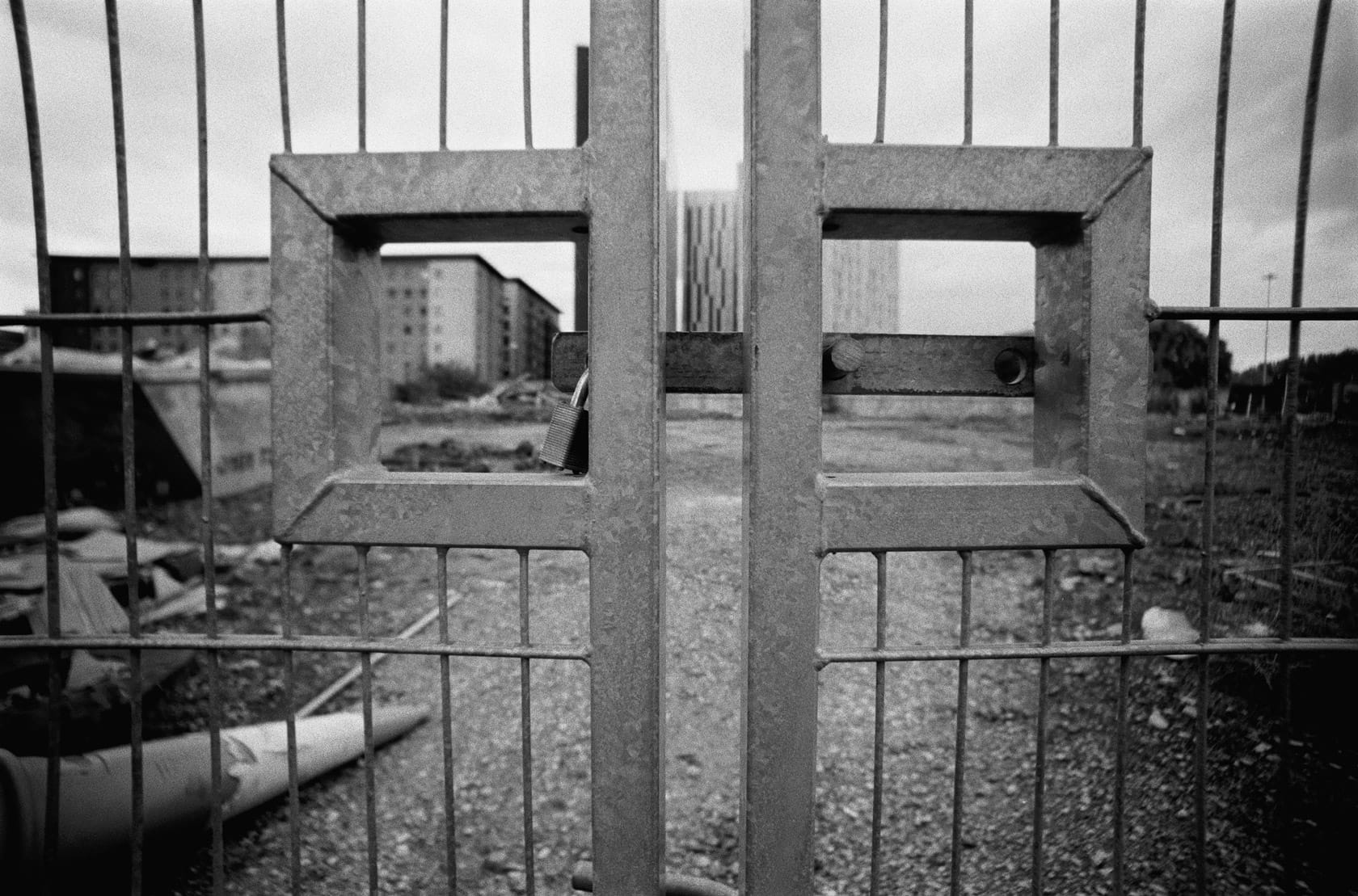 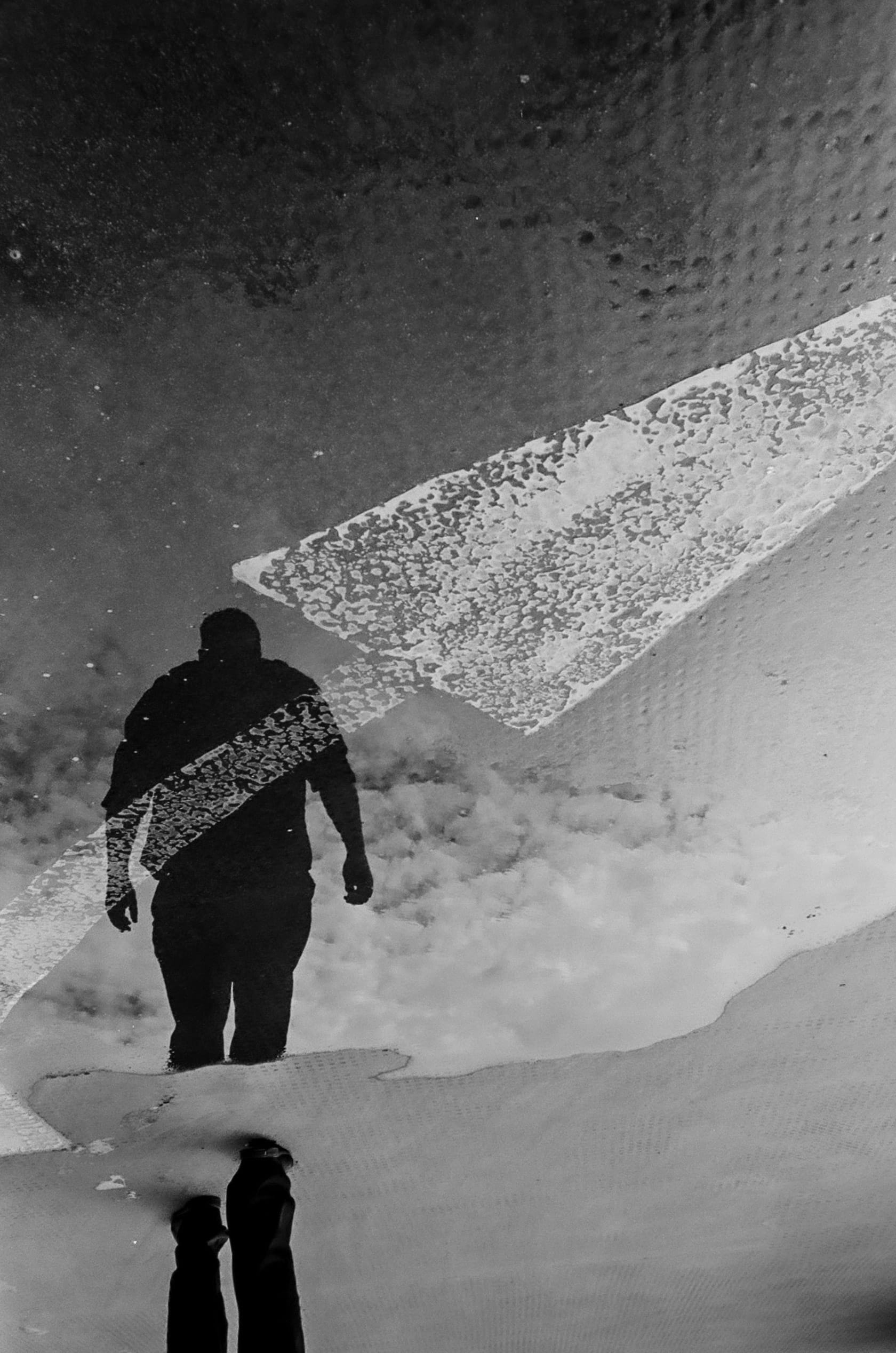 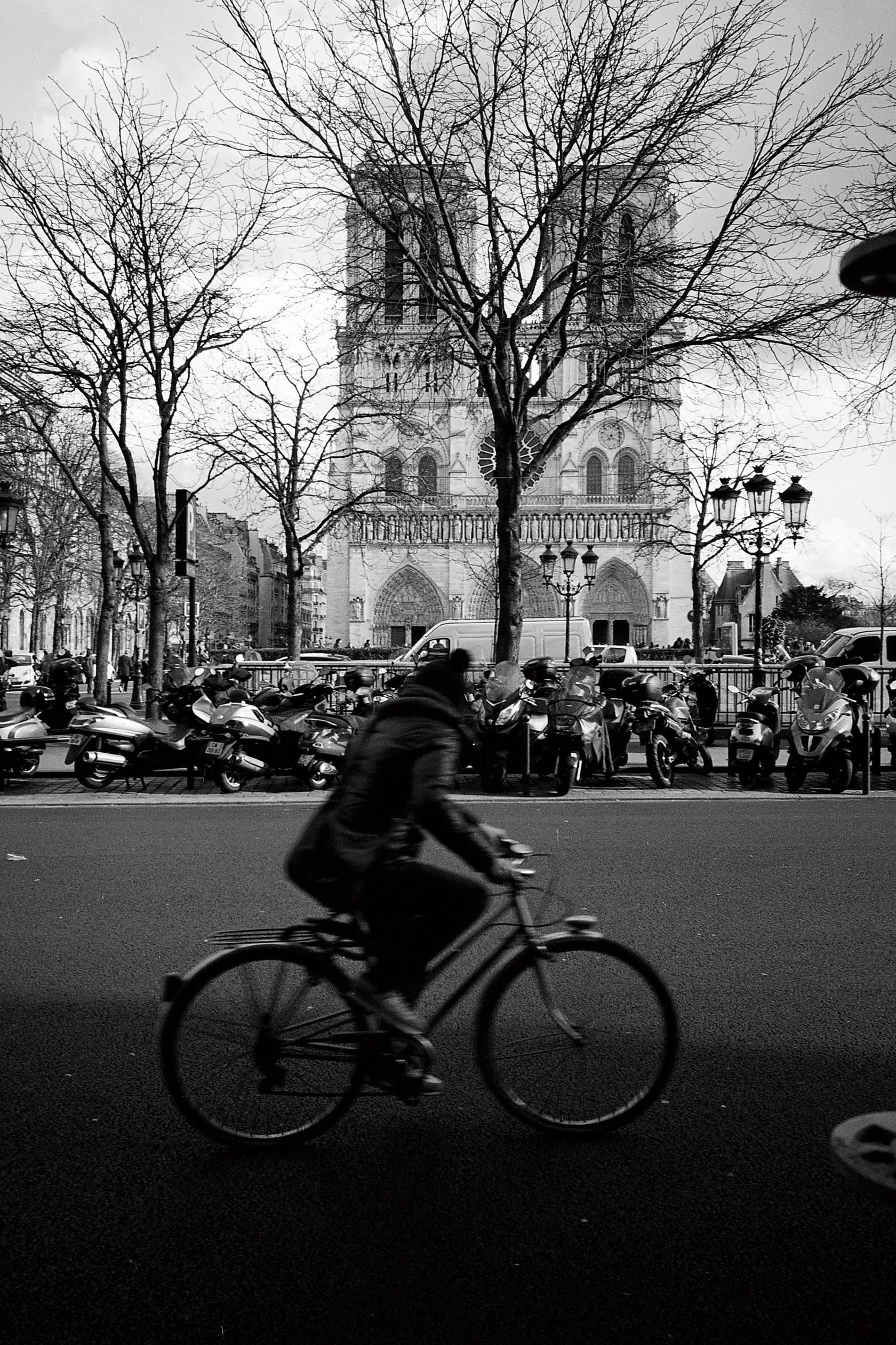 All these images have been taken before, and they’ll be taken again, probably by both you and me. The point is though, exploration of the done-before can make path to originality (whatever that means) more clear.

3. Street photography doesn’t have to be of people

There is much more to urban environments than just the people that occupy them. If you want to take photos of people, that’s fine, but if you don’t, that’s ok too! I very rarely treat people as the subject, instead I more often than not just use them for scale, or simply as compositional elements within the frame. And in fact, quite often I don’t include people in my images at all, preferring instead the “impression” people have left on the environment. 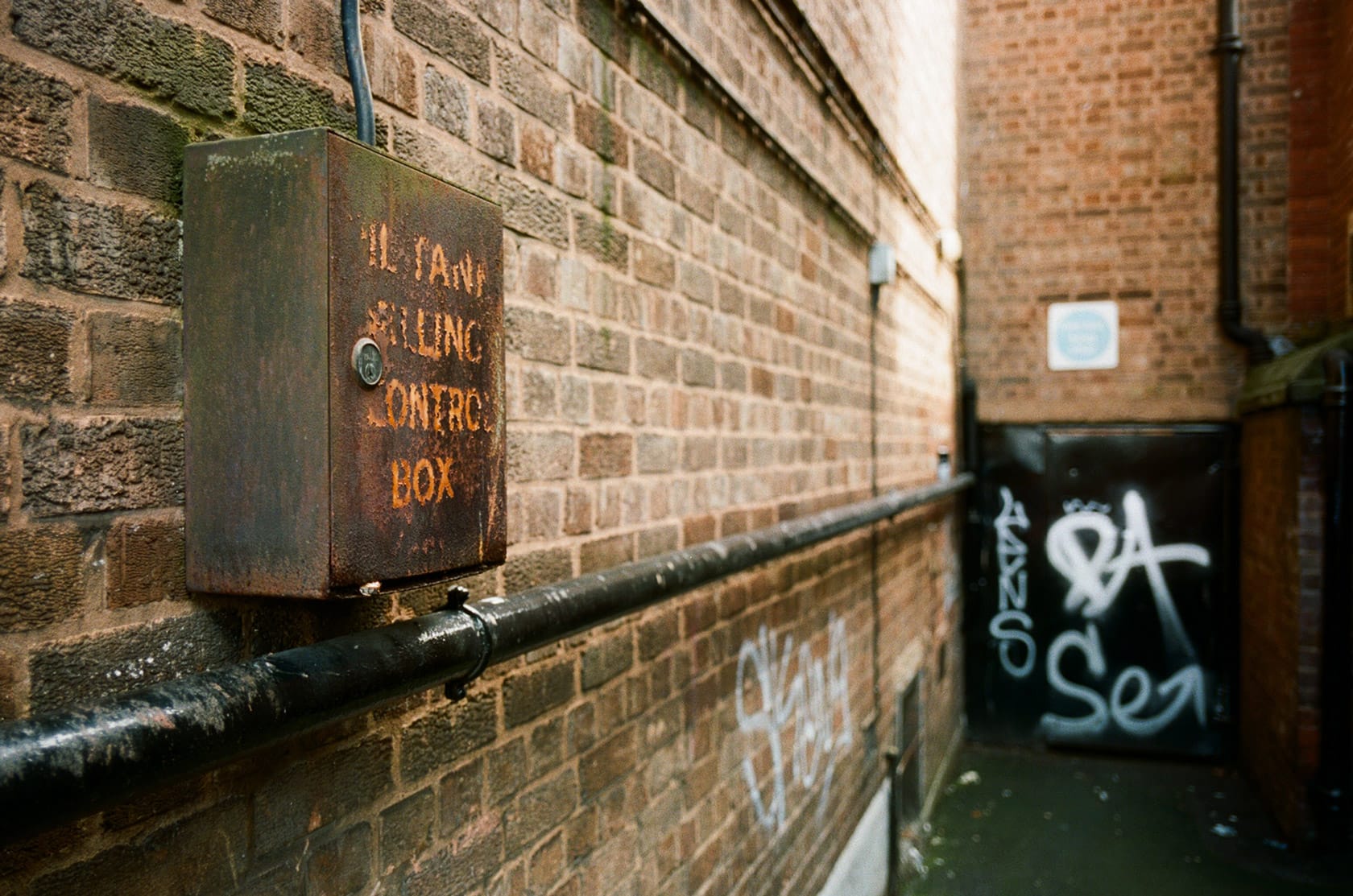 When I say look up, I don’t just mean up, I mean look around you, properly. What’s on the floor, what odd architecture is there up near the roof of that building you walk past every day? It’s easy to forget that your brain is a very powerful filter. You have to fight your brain to properly observe and take in your surroundings. Photography is a great way to see all the things around you in a different way – especially those things you have looked at a million times before. 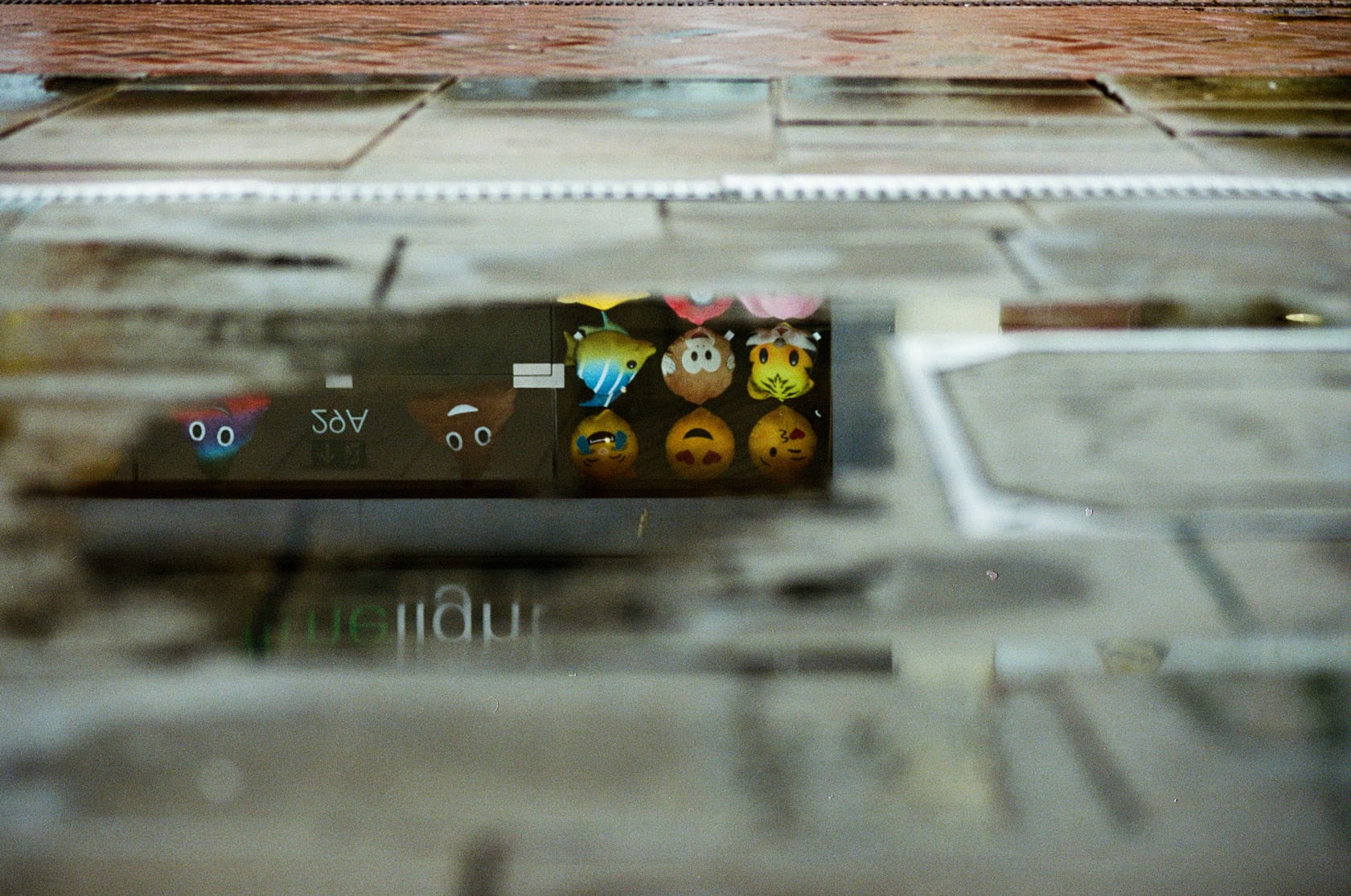 This might seem like broad spectrum photography advice, but if you live in a small city like I do, familiarity with your surroundings can become the greatest obstacle to taking photos. A friend of mine recently told me about an idea he’s been exploring wherein he stops every 7 steps to take a photo of something new. In familiar surroundings this can be a challenge, but it certainly helps train the eye to see!

Street photography seems to often be associated with taking photos outside. Yet, I find indoor spaces just as interesting. Museums and Libraries are particular favourite places for me. Just remember, these places tend to be private property, so you’ll likely need permission. Just ask someone at a reception desk/ticket office before you start shooting. 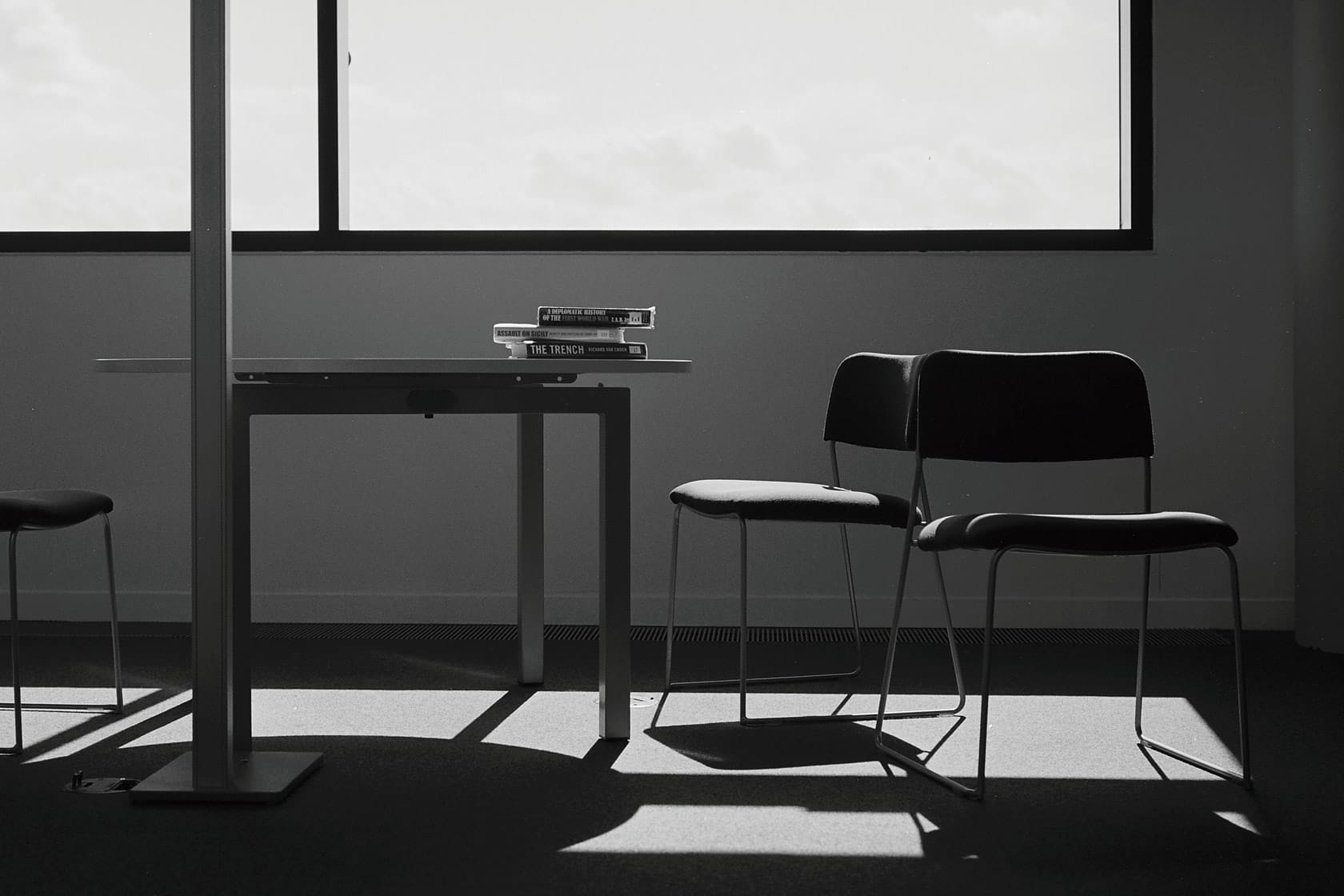 The beauty of the indoor space is the design that’s gone into it. Walk down a road and you are of course surrounded by designed architecture, but you’re also walking on a road and probably have the sky above you. Neither of these things have had that much thought go into what they look like. Inside a museum or gallery there’s a good chance that every wall, floor, ceiling, display case, desk, window etc etc has been designed. Not only has it been designed, but it has been with human interaction in mind. Humans occupying and interacting with designed spaces can make for really interesting and aesthetically pleasing images. 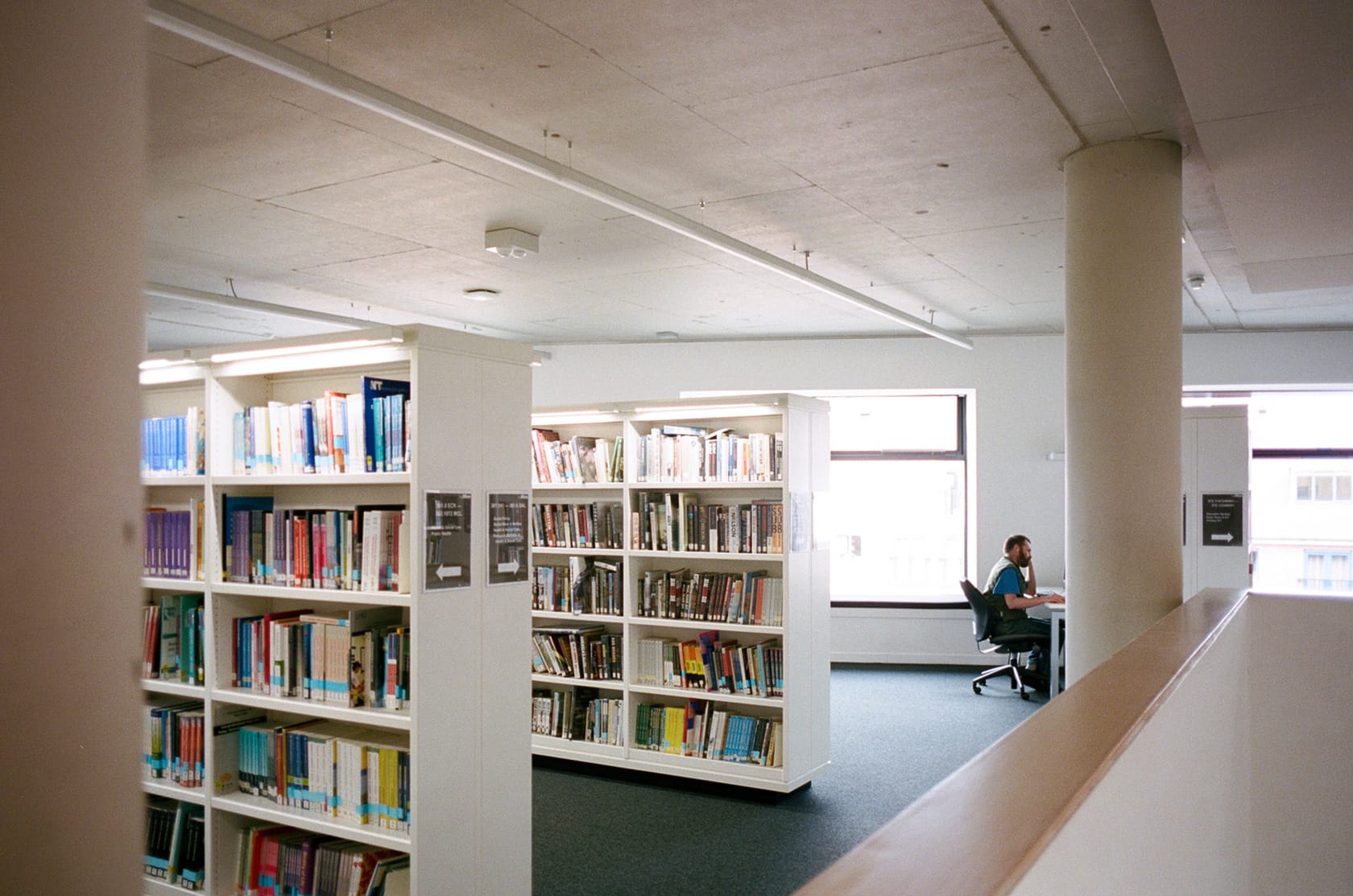 6. Shoot with a camera you are comfortable with

The Leica rangefinder, Ricoh GR (film and digital) and Fuji X100 series are great street photography cameras, there’s no denying it! But, if you want to shoot street with a Canikon machine gun and 400mm f/2.8 fill your boots! If you find a Chamonix 24×20 ULF camera suits your street photography style, then don’t let anyone tell you otherwise! Like most people, I’m a big advocate of using the right camera for the right job, but above and beyond that I’m more of strong believer in the idea of the right camera for the individual. Shoot with what works for you! 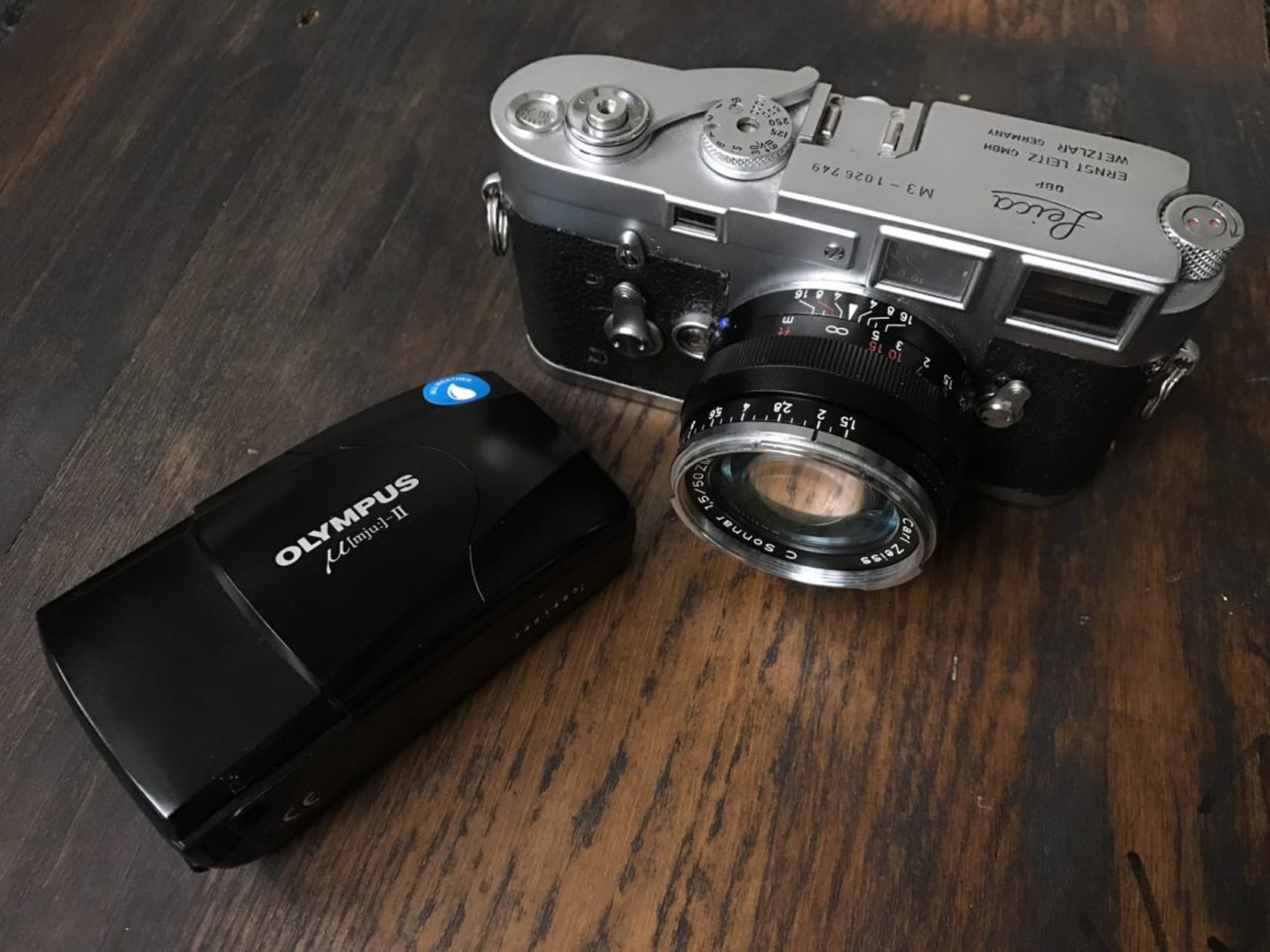 Finally – and this is something I have been learning lately – challenging your perspective can really help. It’s very easy to get wrapped up in the idea that 28-50mm lens framing is the only way forward for street photography.

In the last 6 months I’ve had more fun and had more interesting results shooting with a 17mm, and latterly a 85mm. There is no perfect street focal length. It’s not the focal length, it’s what you do with it that counts!

The beauty I’ve found in both of these focal lengths is that they allow you to be more subtle. Obviously the 85mm lets you stand further away, but actually, the wider angle lenses also allow increased subtlety too. With a 17mm lens, you don’t really have to put the camera to your eye – with such wide angle lenses, it’s hard not to get your subject in the frame.

Just one tip, if you are going to shoot ultra-wide, think leading lines, and close up subject matter – there is little more dull than a wide shot with no obvious subject matter or something to direct the eye of the viewer.