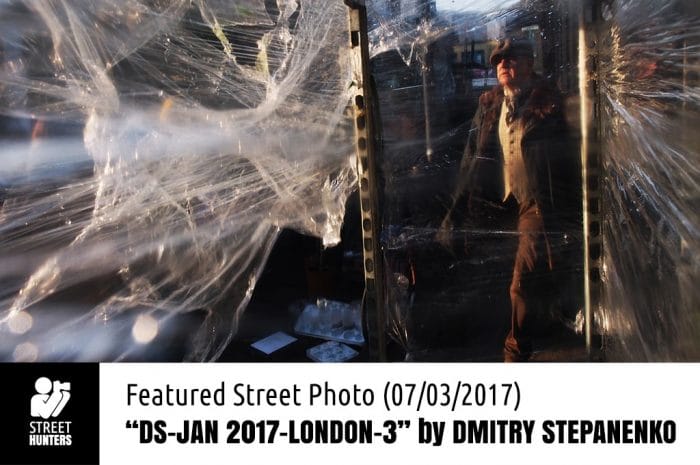 Dmitry Stepanenko is a Ukrainian Street Photographer from the city of Odessa. In 2010 he moved to the UK and found himself interested in street photography. Since then he has been shooting non stop. Now, 7 years later, Dmitry has proven to be an industrious person besides a talented street shooter. He is founder of the street photography collective called Momentum which he started in 2011 and is also a founding member of The Street Collective which began in 2013. He has exhibited his work in Russia, Europe and the USA and has participated in many street photography contests as both a photographer and as a judge. Dmitry also teaches workshops together with other members of The Street Collective, mostly in London, UK.

You can see more of Dmitry Stepanenko’s photography on his Flickr at www.flickr.com/photos/139511795@N05/ and also on his page on the The Street Collective website at www.thestreetcollective.com/dmitry-stepanenko/.

This looks like it has been shot through a plastic wrap of some sort. There is this metal frame wrapped with transparent plastic but the way the photo has been made and the angle Dmitry has chosen makes me feel that the image is zooming into the subject, even though it isn’t. It creates the illusion of zoom, which is very cool! This effect though could not have been emphasized without a subject strategically placed at the other side of this weirdly made transparent plastic cuboid. So, by waiting patiently for a moving person to pop into the end of the plastic wrapped metal frame Dmitry has made the zoom effect much more apparent. It seems to me as if when I am looking at this photo my gaze is honing in onto the target. A very surreal shot, with excellent light and surely a one of a kind moment that can’t easily be repeated. Simply great!