NOTE: This is a Guest Blog post written by Lewis Thomas exclusively for www.streethunters.net.

If you’re reading this you’re definitely going to be familiar with the concept of blogging. But not as many people are familiar with vlogging. This is essentially a video based version of blogging which allows you to present your ideas and opinions about street photography straight to camera and reach you viewers directly. You can see several examples of vlogging on the streethunters.net YouTube channel with both the Street Talk series and the Street Hunts shot directly from the street photographer’s perspective.

Of course, once you’ve started to take an interest in watching or producing Street Photography vlogs, you’ll open a door to a whole new world of content! Other types of popular vlogs include Yoga Vloggers, Mum Vloggers, Parkour Vloggers, Car Vloggers, Bike Vloggers. It’s amazing how quickly a huge variety of people with different interests, hobbies and specialisms have transitioned into this new and exciting medium.

If you like the idea of vlogging, you may well be interested in how you can go about making your own street photography vlogs to document your experience of shooting photos out on the streets. This can be quite challenging though, as it does require some specialist equipment to get the very best results. Fortunutely, several street photographers out there (including the streethunters.net team) have already mastered a useful technique to record point of view street hunts. 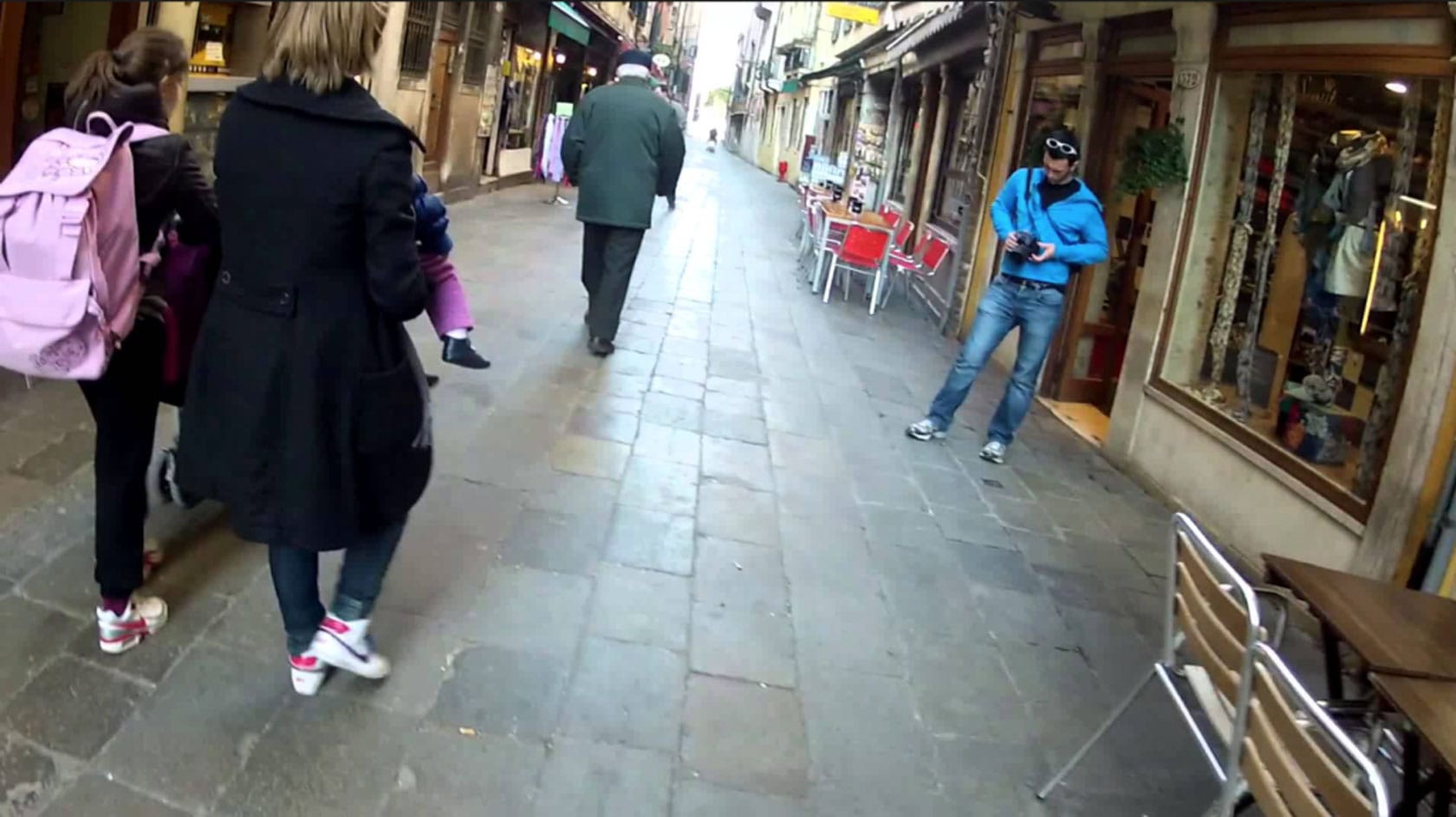 The main method of achieving this point of view effect is by adding an action camera to the hot shoe of your camera. This is easily done by buying a hot shoe mount adapter that can be attached to a GoPro action cam for example. Below we have listed three examples of the best action cameras that are great for Street Photography Vlogging. 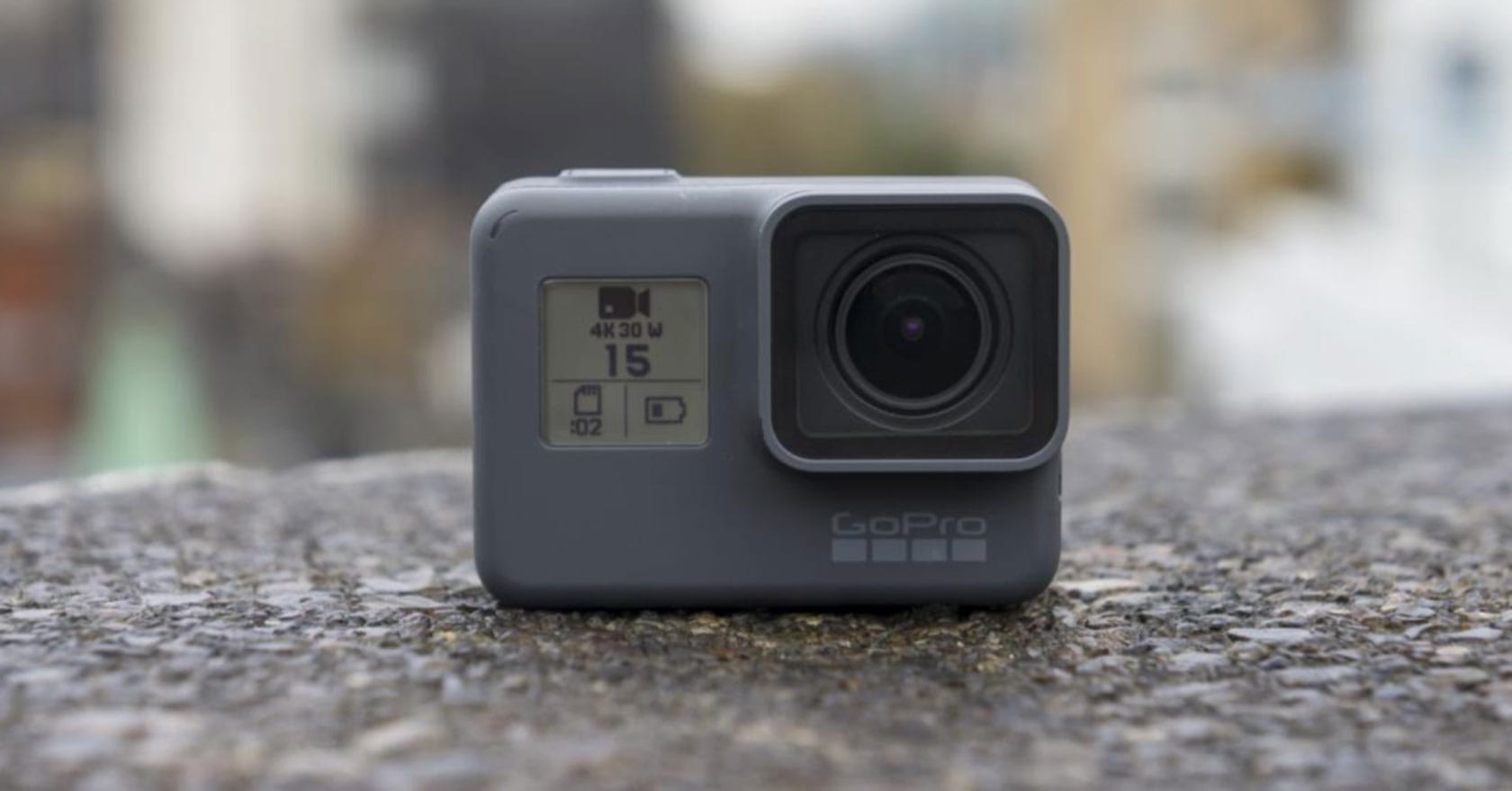 No action camera list would be complete without the mention of a GoPro camera. This is not just because of the brand name, it is due to GoPro consistently delivering a cutting edge camera that pushes the boundaries and produces stunning results.

Many competitors have begun to catch up with GoPro in recent years. However, they may have some work to do to match the new GoPro Hero5 Black. In true GoPro fashion they have jam packed this action camera with new features that don’t hamper the performance of usability of the product.

Some stand out features on the Hero5 are the new touch screen LCD on the back of the camera. Gone are the days of waiting to get home to see footage – a common bugbear when documenting your street hunts. Another bonus of this GoPro Hero5 is that there is no housing needed anymore, as this camera has a dust proof, water proof and shock proof body. Also with a huge range of mounts and adapters out there it’s really easy to attach the GoPro to any camera and mix up your angles too.

When it comes to video recording the Hero5 has raised the stakes with wide dynamic range photo capture and linear field of view video. Also the option to record up to 4K video is very tempting if you’re after a really tack sharp video for Street Photography Vlogging.

Sony doesn’t get talked about that often in the action camera community, but  the new Sony FDRX3000 is certainly worth considering. Sony has transferred their ‘traditional’ camera manufacturing expertise to action cameras and the result certainly hasn’t disappointed.

One of the main reasons behind the huge popularity of this action camera is the BOSS system (Balanced Optical SteadyShot ). Essentially this is another version of Optical Image Stabilisation, and it provides with that all important stabilised video for much better results while out on the streets recording your Street Photography Vlogging.

Another great thing about this Sony FDRX3000 is the 17mm ultra wide angle lens which offers a really wide field of view, allowing your viewers to take in the whole street scene and see what’s going on around you and your camera. It also has the ability to record in 1080p or 4K resolution. Combine that with a great onboard microphone and you can expect top notch footage from this camera.

Unlike the Hero5, the FDRX3000 uses a detachable housing to add full waterproofing. In a refreshing departure from earlier Sony ActionCam models, the FDRX3000 does away with the round lozenge shape on the base of the camera in favour of a flat surface with its own dedicated tripod mount. That means that unlike the AS15 and AS20 action cams used by Spyros Papaspyropoulos and Digby Fullam on their street hunts, the FDRX3000 can be mounted directly to a tripod mount without the need of its waterproof housing which prevents the microphone from being obscured. The FDRX3000 camera can also be easily attached to a camera hot shoe mount with this Sony accessory, allowing you to easily record in POV mode while practicing your street photography. 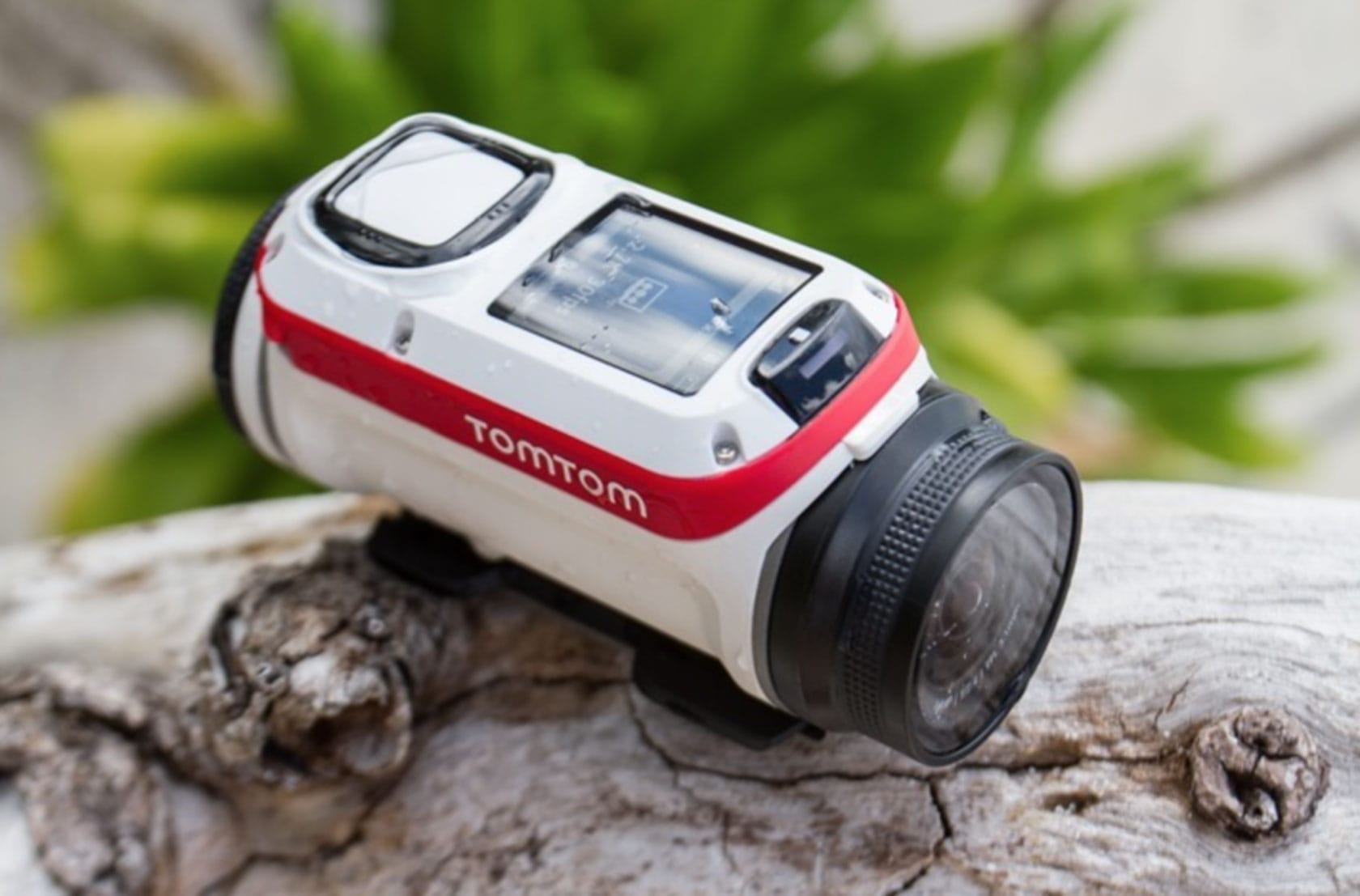 This strange action camera is deceiving in almost every way. The first major surprise of this camera is the manufacturer. Yep you saw that correctly – that’s Tom Tom, the GPS navigation company! Before researching this article I would never have guessed that Tom Tom would be in the action camera industry, and deliver a great and affordable product too!

Another interesting component of this Tom Tom Bandit camera is the bullet shape design. While the design choice may seem odd at first it does serve a functional purpose. By having a unique bullet design it is more unobtrusive and provides more room for adjusting setting and a bigger battery in the casing.

When it comes to the specs of this camera, they are nearly on par with the above mentioned cameras. This Bandit Action Cam is on the lower end of the price scale so some sacrifices are to be expected. Some stand out specs are 4K video recording, 3 hour battery life of continuous video shooting, and built-in sensors to monitor G-force, rotation and playback.

Another great design feature of this camera is that it is compatible with any GoPro adapters which opens up a whole new world of video capturing opportunities. This is also a major headache saver as it saves time and money trying to find the right mount to hot shoe to your camera for example. Similar to the new GoPro this Tom Tom Cam has a built in housing and splash proof lens cover so no need to worry about any more third party accessories! This also makes it lighter and less unobtrusive for Street Photography Vlogging. 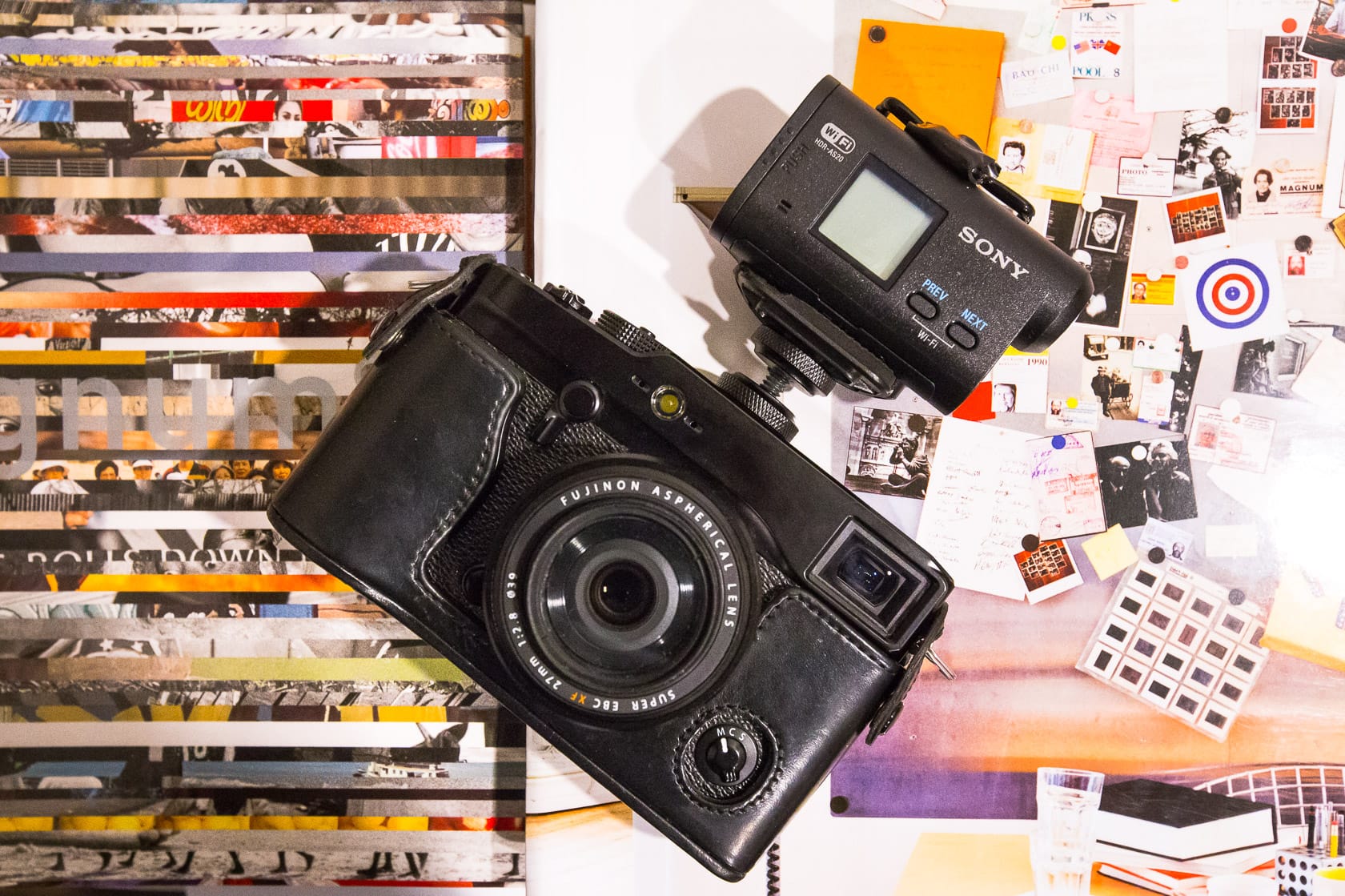 By attaching one of these action cameras to your camera you can give your viewers a unique first person perspective on your street hunt photo walk. Once you’ve done that you’ll be able to shoot and record your own videos, and even submit them to Streethunters.net for the chance to have them featured as a 3rd Party Street Hunt Video on the Street Hunters YouTube channel! You can view more about Vlogging and the best Vlogging cameras here.