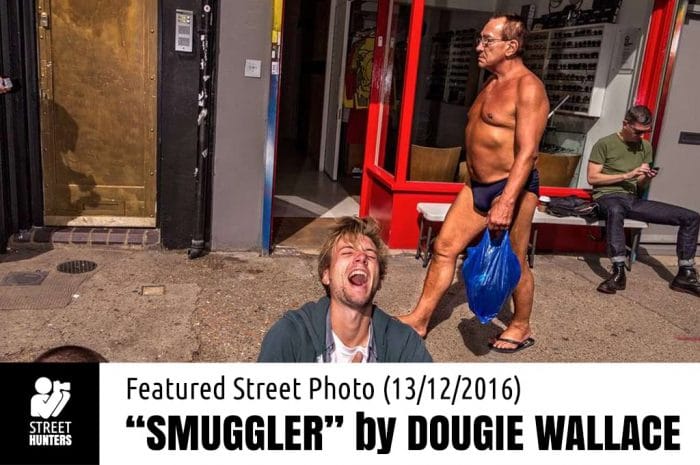 This time we are featuring a photo by one of my most favourite contemporary Street Photographers, the illustrious Dougie Wallace. If you haven’t heard of Wallace, then you probably need to brush up on your contemporary street knowledge because this guy feels as if he is the natural evolution of Cohen, Gilden and Parr. He is a guru of Flash Street Photography. I find his technique just perfect. He uses the combination of his amazing artificial light tricks and ambient light sources and good composition skills to blast the living daylights out of the most unbelievably interesting characters you can imagine. When you look at Wallace’s work you feel that he has been everywhere and experienced everything and after each photo, you just want to see more and more and more!

Dougie became famous for the series of photos he shot outside Harrods in London. In case you don’t know what Harrods is, Google it, but the quick version is it is a posh shopping centre where rich people do their shopping. And when I say rich, I mean super rich, like lords, sultans, actors, etc. So Dougie has managed to make a massive collection of portraits and street scenes starring these very interesting people using a massive flash to illuminate every single detail of their personas.

Needless to say that Dougie Wallace’s work has been awarded, exhibited and published. He has published his work in books throughout the years which you can purchase by following the relevant links on his website.

You can see more of Dougie Wallace’s photography on his website at http://www.dougiewallace.com and you can follow him on his Tumblr at http://glasweegee.tumblr.com or his Twitter at https://twitter.com/dougiewallace.

It was very hard for me to single out one photo for today’s feature, but that is how it has to be so I did my best to choose my favourite Wallace photo. But seriously, if you go through his work you can’t say with absolute determination “that is the one” because all his photos are so cool. So, as you most probably have guessed by now, it took me hours to conclude. I changed my choice many times, don’t remember how many, but in the end, I decided to go with this one.

The main reason why I find this photo compelling is walking in speedos holding a blue nylon bag and wearing flip flops! Combine that surreal character with what is going on in the rest of the frame and you have a the perfect ingredients for an insane story. The only limit to the way the possibilities of this story can unfold is the viewer’s imagination. I will not give you my own interpretation this time, like I usually do, but I will let you study the photo and think of your own version of the story. I think, the impact of Wallace’s “smuggler” will be much stronger that way.