I can’t remember where I first read this mantra for photographers, but I’m sure it was in something that the venerable Eric Kim wrote. No matter, these words stick. The mantra can be applied to any genre of photography, but if you mull it over, it especially makes sense for street photographers.

I’ve seen great street photographs made with anything from disposable cameras to smartphones to top of the line Leicas and beyond. So the truth is, a great photograph can be made with any camera. But our gear lust is a natural, unavoidable condition. Most folks are just wired that way. Anyone, from artisan to tradesman, would want to try the more expensive tool. To drive a Ferrari on the track. If anything… just to see what it would be like.

So, it is suggested that we buy books and not gear, because buying the best gear will not make us better photographers. Just like a better hammer will not make you a truly better carpenter. So why funnel your cash into photo books? Because the photographer’s soul is constantly hungry for inspiration and it’s constantly wanting to give appreciation. A good photobook will bring endless returns. A physical keepsake that we can come back to anytime. A reminder that we can always be a better photographer. And sometimes that reminder is subversive, hidden in the guise of our appreciation of an image. While we gush internally over a particularly great photograph, somewhere deep, deep down we end up longing to make a photograph as great as the one we’re viewing. There’s real value in that lust, if we channel it properly.

And let’s be honest, looking at a printed image blows away looking at an image on a monitor or a phone.

But let’s also be honest about this… quality photo books aren’t cheap. It’s no stretch to say $30 USD and beyond is the norm. A photo book habit (which can be developed very quickly, trust me) can drain your account real quick.

So enter the zine.

I’ve talked about zines here before with my reviews of Hamburger Eyes and the works of Sean Maung. Zines are an affordable way to get printed matter in your hands. They’re like the younger, garage rock sibling of the photo book. Smaller in size. Often staple-bound. Sometimes xeroxed. And, more often than not, under $20. There’s a wealth of them out there, and I’ve been lucky enough to get my paws on some of them. And I say lucky because not only are they good, but because they’re produced in small batches and they can disappear real fast!

Also, zines are produced by the photographers themselves or small, independent publishing houses. So, purchasing a zine can be giving back directly to our community. The money goes back to the photographer and/or the independents, who aren’t in it for the money, that put it out. And supporting the Do It Yourself ethic in the arts is pretty damn cool.

With all that being said, let’s take a look at two very fine zines bright to you by one very fine house. They won’t break the bank and they’ll feed your eyes and soul. This week, we’ll  making room on the shelf for two new zines from Deadbeat Club: Troy Holden’s ‘Stray Shots’ and Ewan Telford’s ‘Rock Salt’. 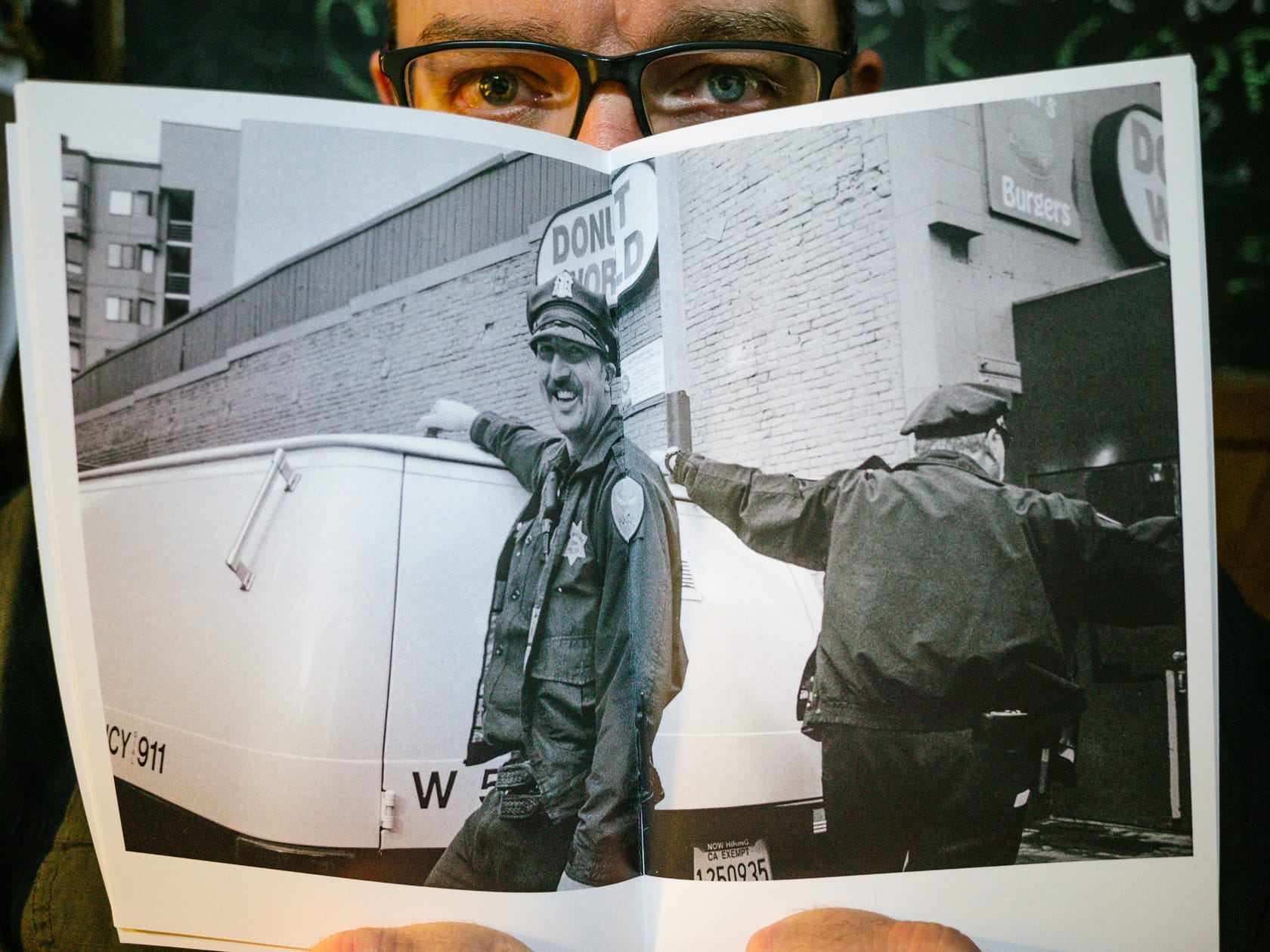 Troy Holden, a San Franciscan photographer, has said he’s going to spend the next 30 years dedicated to photographing San Francisco. With ‘Stray Shots’, Holden is indeed setting himself up to be a remembered documenter of the city’s street life. 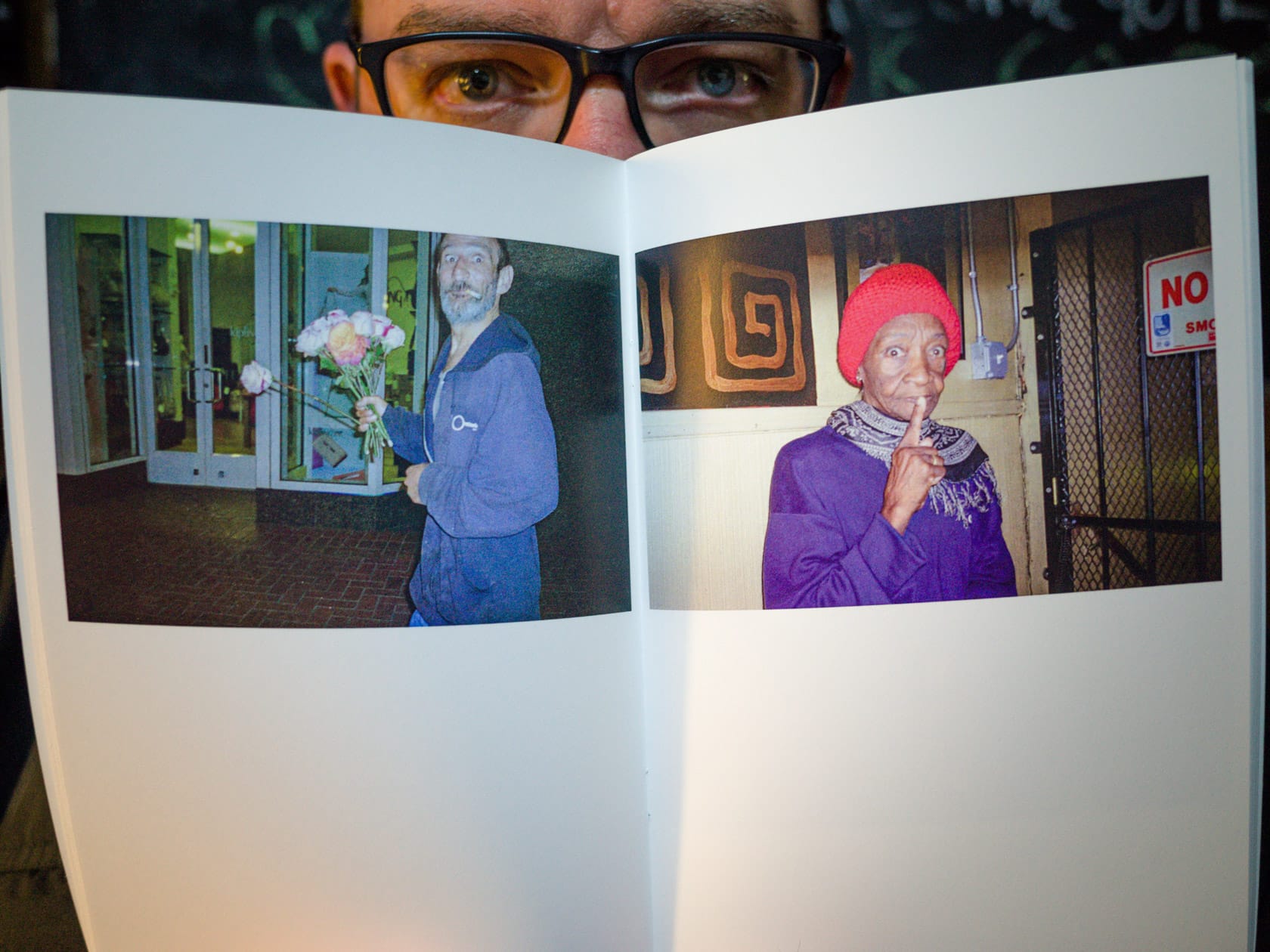 If anything, I would describe Holden’s style as a continuation of “classic” street photography. Mind you, that is by no means a knock. Classic to me is the tried and true candid approach that made me fall in love with street photography. Snatched scenes, characters and expressions on the street that suck you into the vortex of the moment and hold you there, but frozen still with the photograph. The really good stuff locks you to the main character while the rest of the information in the image becomes, somehow, virtually fluid. You can hear the soundtrack of the scene. A siren. Tires on wet pavement. You can smell the city. Exhaust from the vehicles. Flowers from a vendor. Humans, perfumed or funky. In short, the great classic street photograph puts you in that blip of time. 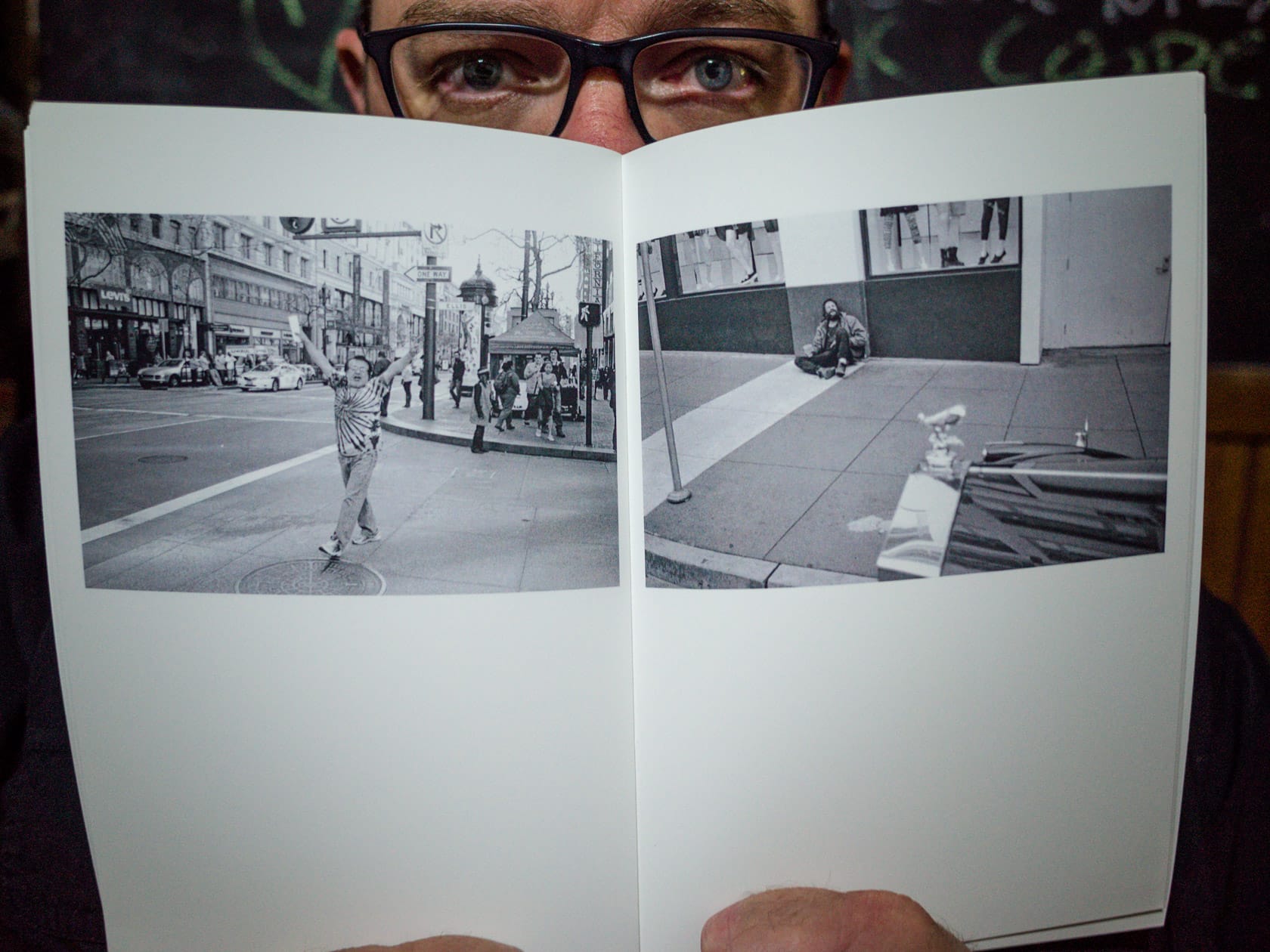 Holden has a strong eye for this style and it’s flexed wonderfully in ‘Stray Shots’. With a mix of color and black and white images, the zine gives us a generous sample of what appears to be a well-worn, familiar turf for the photographer. Over three dozen images give us a taste of his turf in this small package. The stars are, with the exception of a few dogs, the people.

A laughing cop outside a donut shop. A man with a bloodied face, riding a bicycle, looking back into the lens. More cops, this time arresting a man. A girl playing in a fountain. A man, swinging horizontally from a street sign. A dapper cabbie with his bright red pants matching the paint of his cab. More cops. 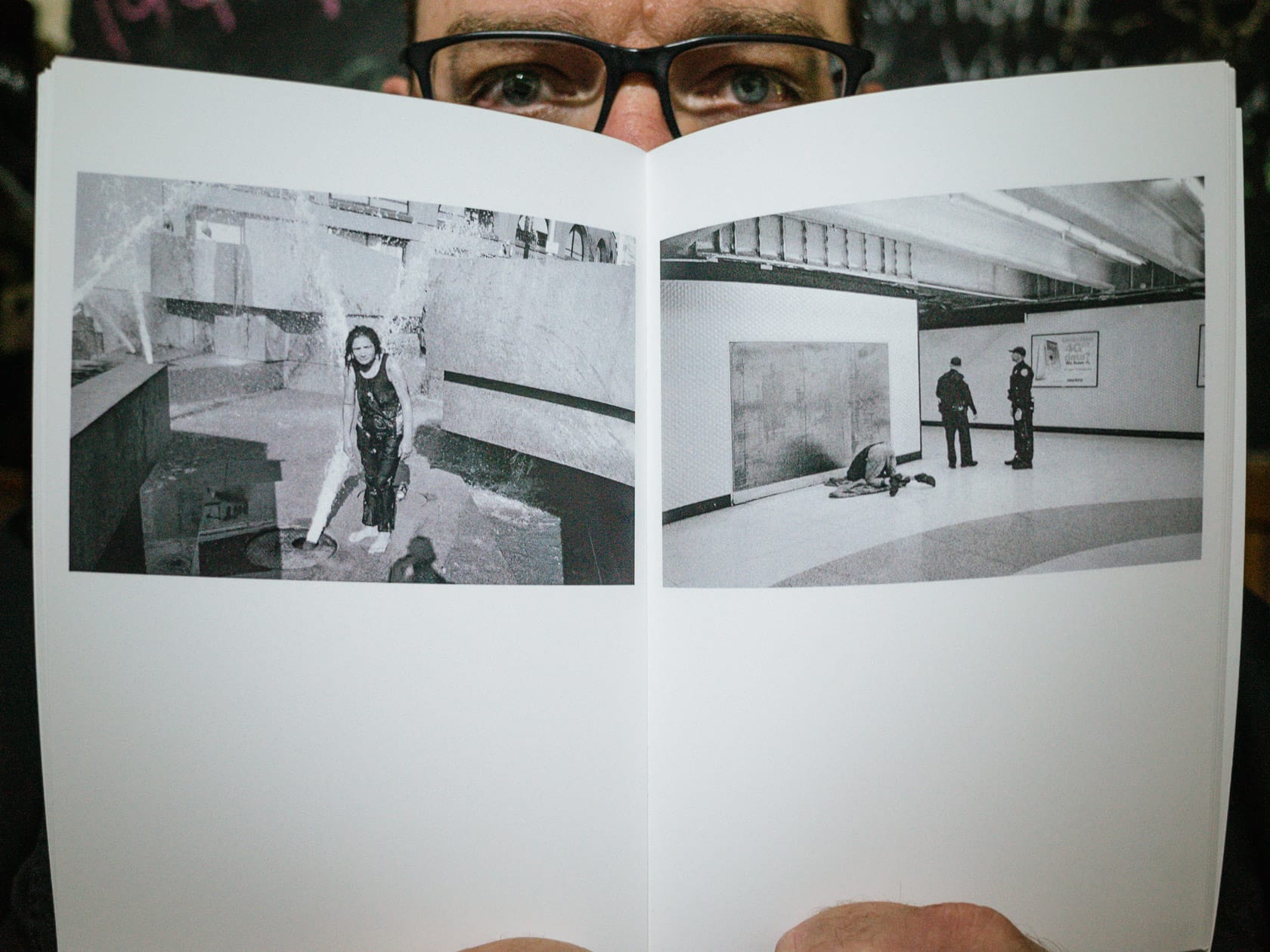 All the moments don’t matter if they’re not photographed well, and Holden has the skill to grab the moments masterfully. The scenes with characters moving seen to keep moving, again, bringing the fluidity while capturing it. The still moments, as still as they were seen. Troy Holden is a classic street photographer, without any doubt. Detected in his images is an appreciation for classic shooters of the past, like Garry Winogrand and Helen Levitt, but they never feel like imitation… more like they were inspired by the work of those greats. 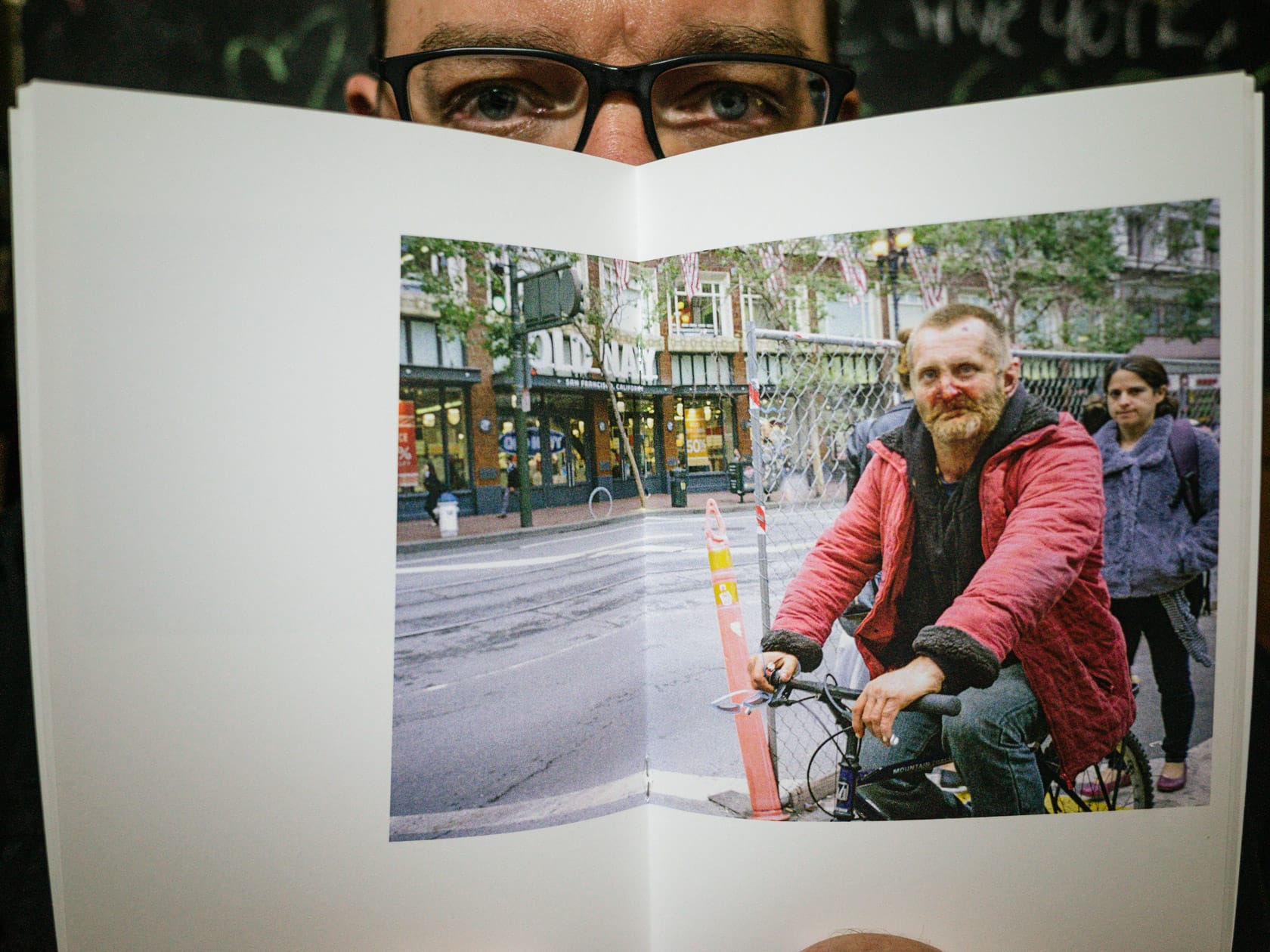 Interestingly enough, to the non–native, the only thing identifying specifically with San Francisco is the cover image, which is also the last image inside the zine… a gentleman spreading to peddling an abundance of San Francisco Giants and 49ers pendants. There’s no cable cars. No hilly streets. No tourist traps. Just real people and real life.

And the total package? Read on. 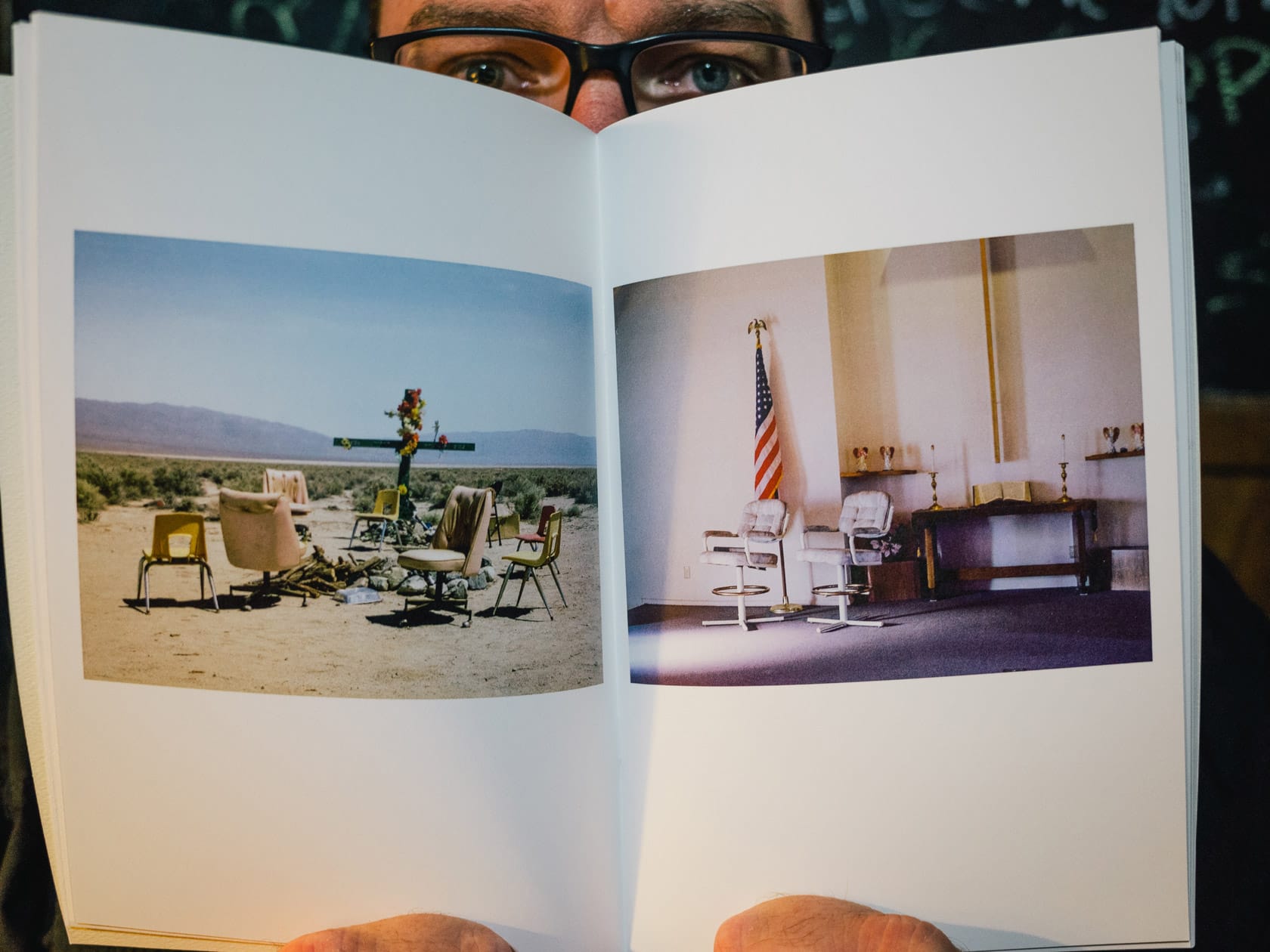 Rock Salt, from photographer Ewan Telford is a different animal. Where ‘Stray Shots’ is purely street photography, this zine is more a documentary project. And it has become one of my favorite zines of the year. I’ll make no attempt to curb my enthusiasm… it’s absolutely, positively gorgeous.

Scotland-born, Los Angeles-based Ewan Telford shot the photographs that would become ‘Rock Salt’ in Trona, California. A small mining town in the Mojave desert, Trona was established in 1913 as a mining company town where the stores and housing are owned by the company that is also the main employer. Employees were paid in company scrip and spent it in company-owned stores. A school, library and minimal recreational facilities were built. A short-line railroad was built to connect with the Southern Pacific railroad. Located about 170 miles north of Los Angeles, and just southwest of Death Valley, this town on the edge of the dry lakebed of Searles Lake is synonymous with desolation. Once booming with a population of 6000 souls, Trona is now inhabited by approximately 1100. 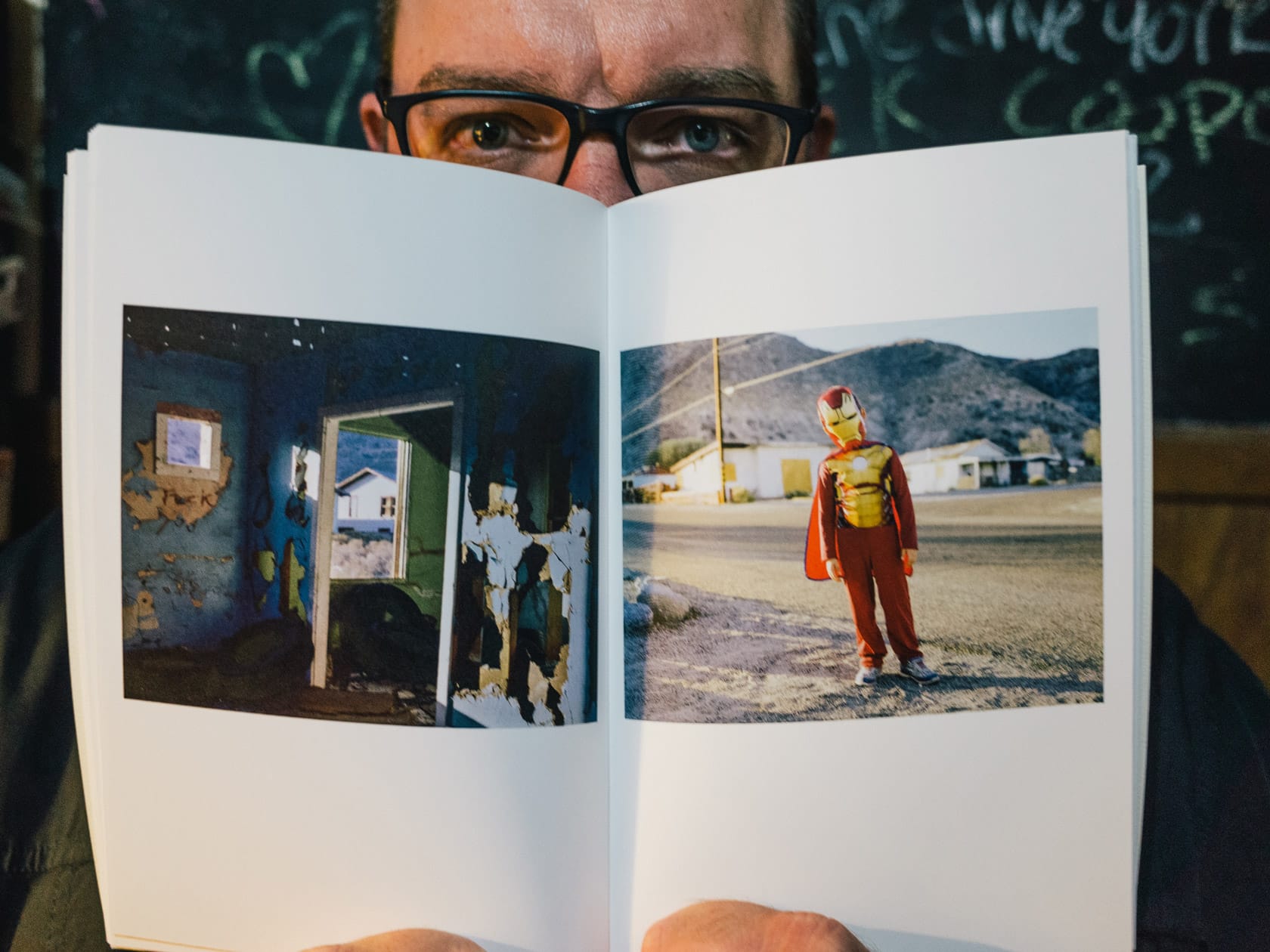 According to the brief, but superbly written and informative essay by Kevin O’Sullivan at the beginning of ‘Rock Salt’, many of the homes “have been demolished by the city, abandoned, boarded up, or targeted by teenage arsonists. It might be misplaced youthful spirits, but the urge to destroy is closely aligned to the urge to create.” On a similar wavelength, Telford came to Trona and fulfilled an obvious urge to create. And he did it magnificently with his camera.

Ewan Telford, with over 30 gorgeous color photographs, has produced a stunning document of life in a town that is made to feel alien to most of us, but also a bit familiar on a small-town level. 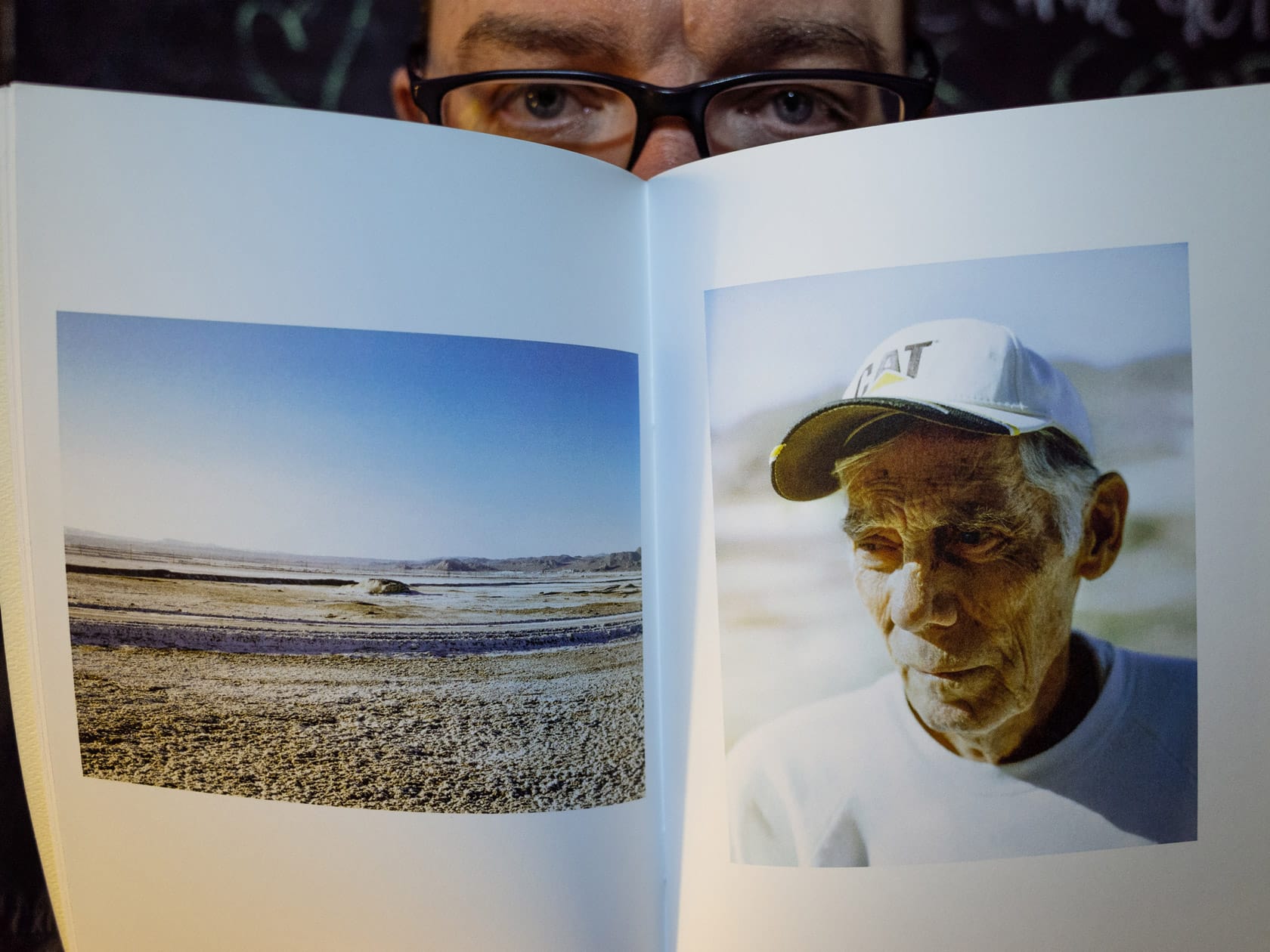 Telford’s images are huge, superbly composed and filled with spectacular detail, and he uses a mix of shots to give us what feels to be a most honest look at what life in Troma is really like. Both bleak and beautiful landscapes, some with the looming industrial/mining spectre to remind us that this is indeed a company town, keep company with stunning portraits of its citizens. Also in the mix are striking shots of interiors and exteriors, that are often affecting despite being untenanted, or at least temporarily vacant. 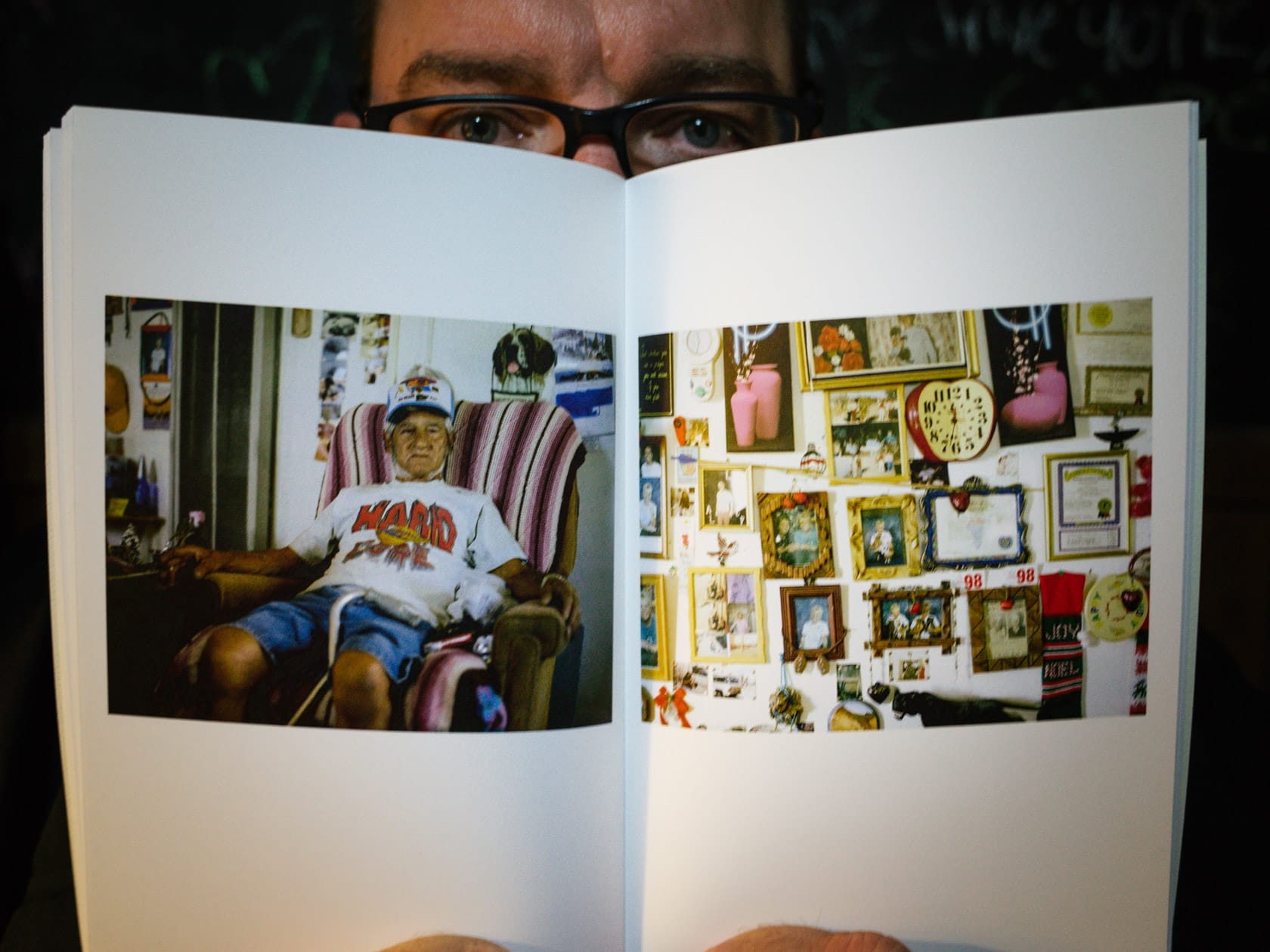 The images are all resplendent in their color and light, and cinematic quality. At points the images are dreamy and romantic, but nestled in them is an almost elegiac tone that inspires commiseration. The final image in ‘Rock Salt’ is one of a parched, dry graveyard with the mining giant lurking in the background. A powerful finish that is as tender as it is tough.

But don’t think that ‘Rock Salt’ is all a pity party. It’s a demonstrably loving project, which is particularly exhibited through the portraits. Pictures that again reflect both toughness and tenderness, bringing forth the soul that still resides in this place that most of us would consider uninhabitable. 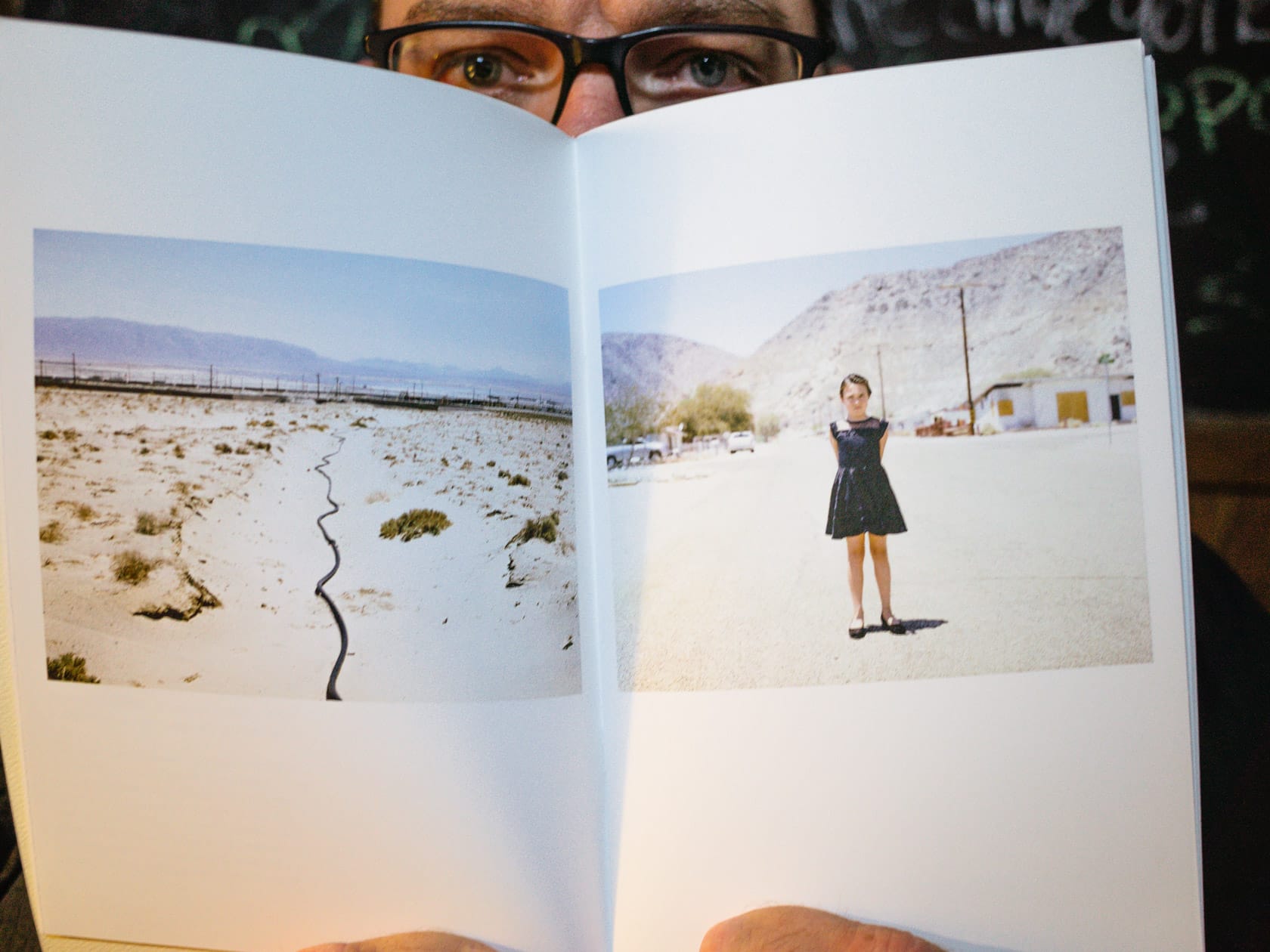 Curated by Clint Woodside, who is also a highly skilled shooter, Deadbeat Club has established itself as a purveyor of fine zines and books with over forty releases to date. Names such as Ed Templeton, Deanna Templeton, Cheryl Dunn, Nick Waplington, Gabriel Angemi, Mike Spears and Woodside himself, are just a sampling of the wildly talented photographers that have had work published by the press.

The “about” at deadbeatclubpress.com states that the press “is an independent publishing group dedicated to the production of small run and limited edition publications rooted in contemporary photography”. With that, it is most important to take note of “small run” and “limited edition”. Meaning, like I mentioned previously, that if you’re not quick to purchase a release… you’ll likely miss out.

However, for the vigilant, a speedy response reaps great rewards.

While limited edition and small run can often be used as merely flash words to pimp a product, that is definitely not the case here. These zines are of a most superior quality and priced at an unbelievable $10 USD. Seriously, they are a steal.

‘Stray Shots’ and ‘Rock Salt’ are 6” x 9”, which is a perfect size to slip into a camera bag, backpack or such. Having printed goodness conveniently portable is very nice. Both laser print zines are staple-bound and have rich, thick pages and thicker, sturdier card-stock covers. Stray Shots is 48 pages in length, Rock Salt is 40.

Deadbeat Club has knocked it out of the park with these releases, especially so with ‘Rock Salt’. Telford’s work is more mini-photo book than a zine. After each read, I’m still left wanting more and feeling moved, motivated, inspired. It’s a project that begs for further exploration. ‘Stray Shots’ is a choice compilation of street work that is also inspiring and left this reader anxiously waiting to see what Holden will capture next. To see more of what Holden sees.

If you don’t already subscribe to the highly addictive “buy books, not gear” school of thought, these two zines are excellent gateway drugs. Woodside and Deadbeat Club are delivering excellent quality products at an extremely affordable price point. With money being stretched even further these days, it’s incredibly refreshing and encouraging to know that there’s photographers and publishers in the community passionately producing work like this to keep us hooked.