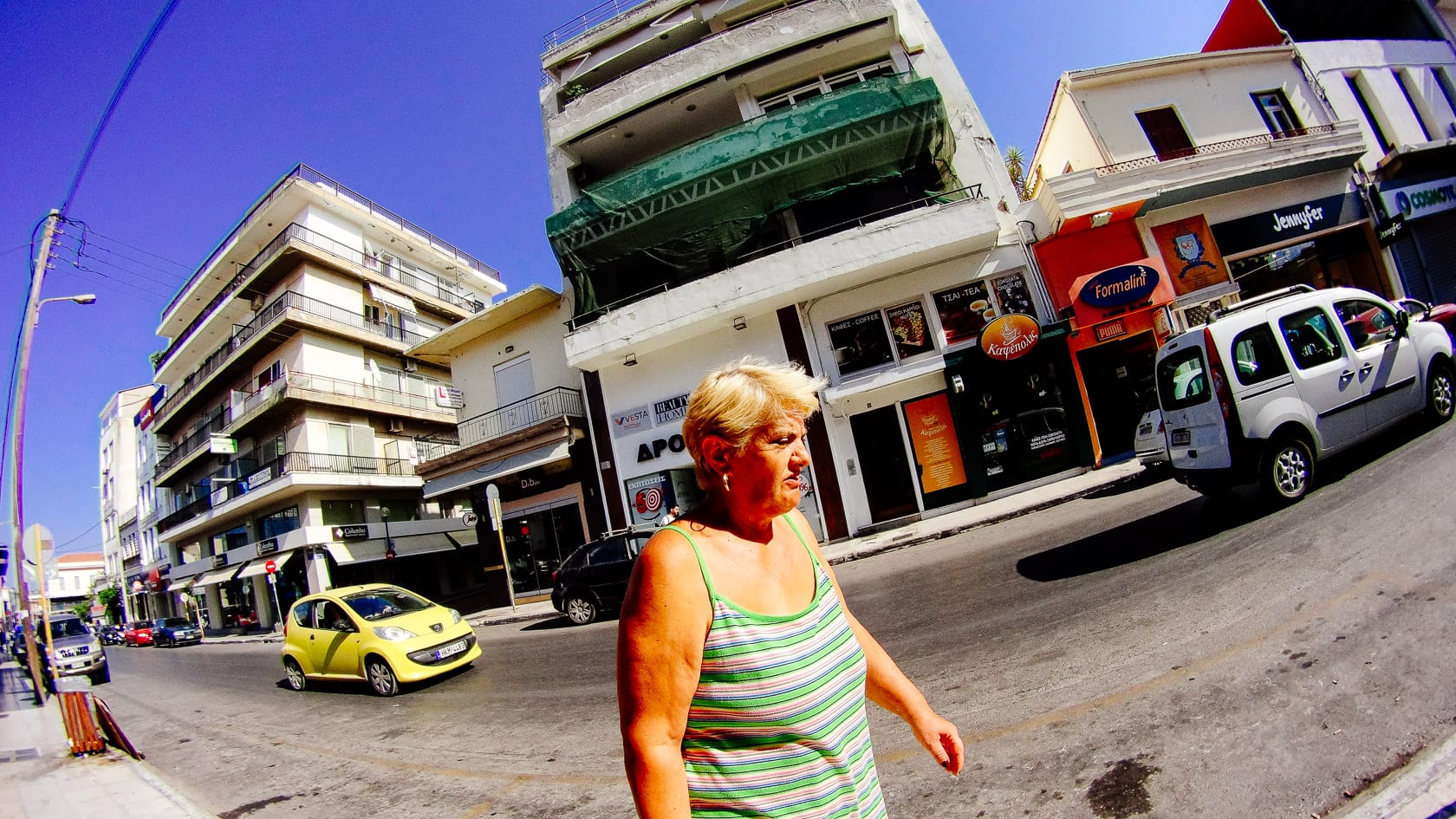 Those of you who are familiar with our street hunt videos will be aware that we shoot our videos by mounting ‘action cams’ in a rig on the hotshoes of our cameras. The weapon of choice for both Spyros Papaspyropoulos and myself is two variants of the Sony HDR-AS Action Cam. This is essentially Sony’s rival to the GoPro. They offer 1080p HD video as well as absolutely essential (for our videos) image stabilisation. I used the Sony a couple of times for still photos on the beach and in the pool, and I was pretty impressed with the image quality from the 11.9MP Exmor sensor, as well as the effects from the super wide angle lens. I decided that this, combined with the action cam’s tiny size, might make for an interesting combination on the streets. So I tried using the Sony HDR-AS20 action cam for street photography. Here’s what I learned:

You have to get in close. Super Close. 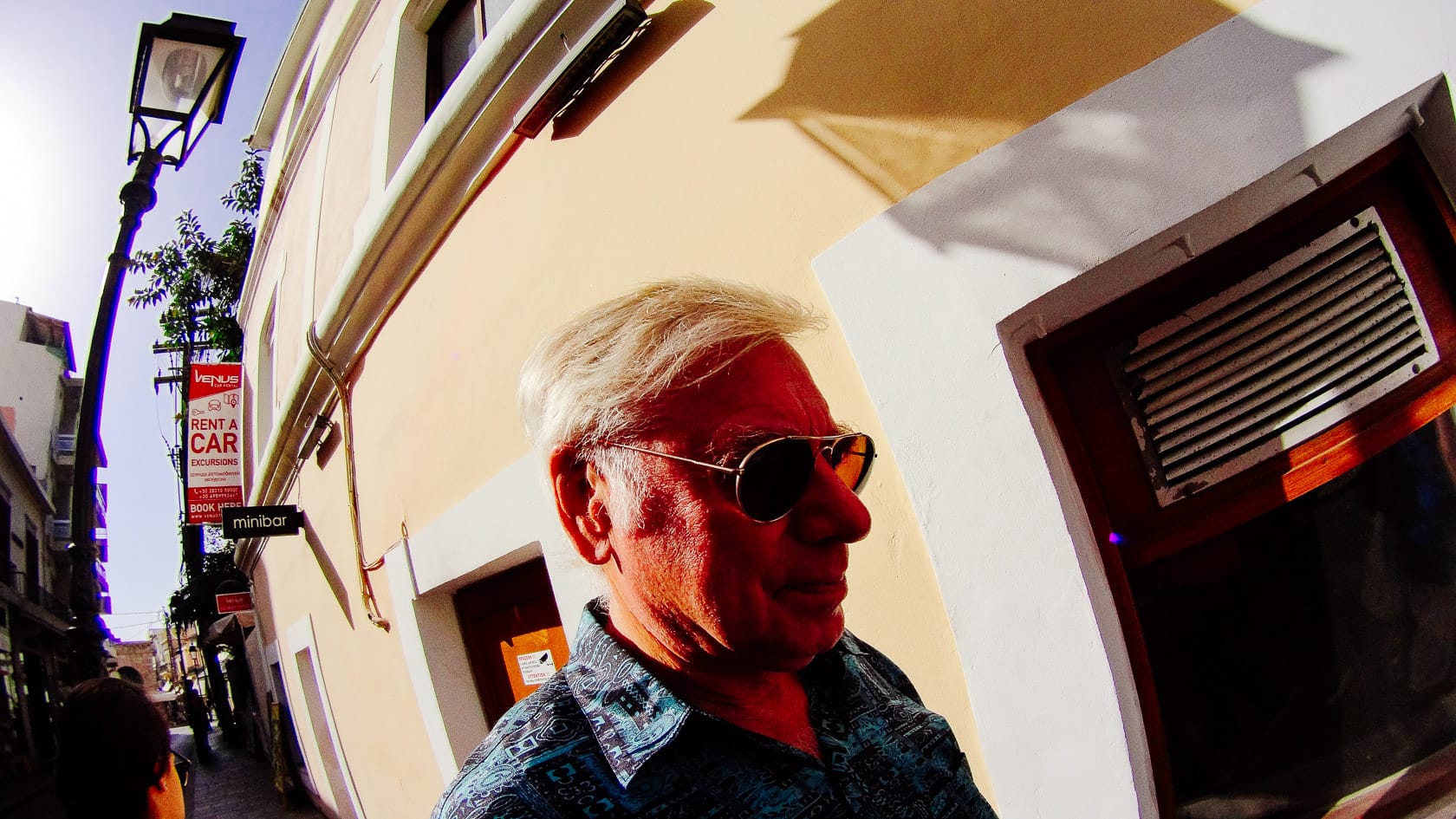 I lean towards wide angle lenses for street photography, and, as I’ve written before, my current favourite lens for street photography is around 27 to 28mm. I feel that wider focal lengths are good for street photography because they force you to get in close, whilst allowing you to fit more in the frame. As soon as you start to get close to your subject, your street photos take on a new level of immediacy. As it is an action cam, the Sony HDR-AS20 has a super wide angle lens that is virtually a fish eye. Sony quote it as having a 170 degree field of view, and being equivalent to around 15mm on ‘full frame’. This is what I’d call extremely wide angle. When I first starting shooting street photos with the Sony action cam I was pretty disappointed with the results, because I was still shooting from around a 28mm ‘distance’. I had to get much much closer to get a semi-decent shot with the Sony. This presents its own problems on the street, as there’s only so close you can go without really invading someone’s personal space. I also found the camera’s tiny design more of a hindrance in this respect (more on that later) 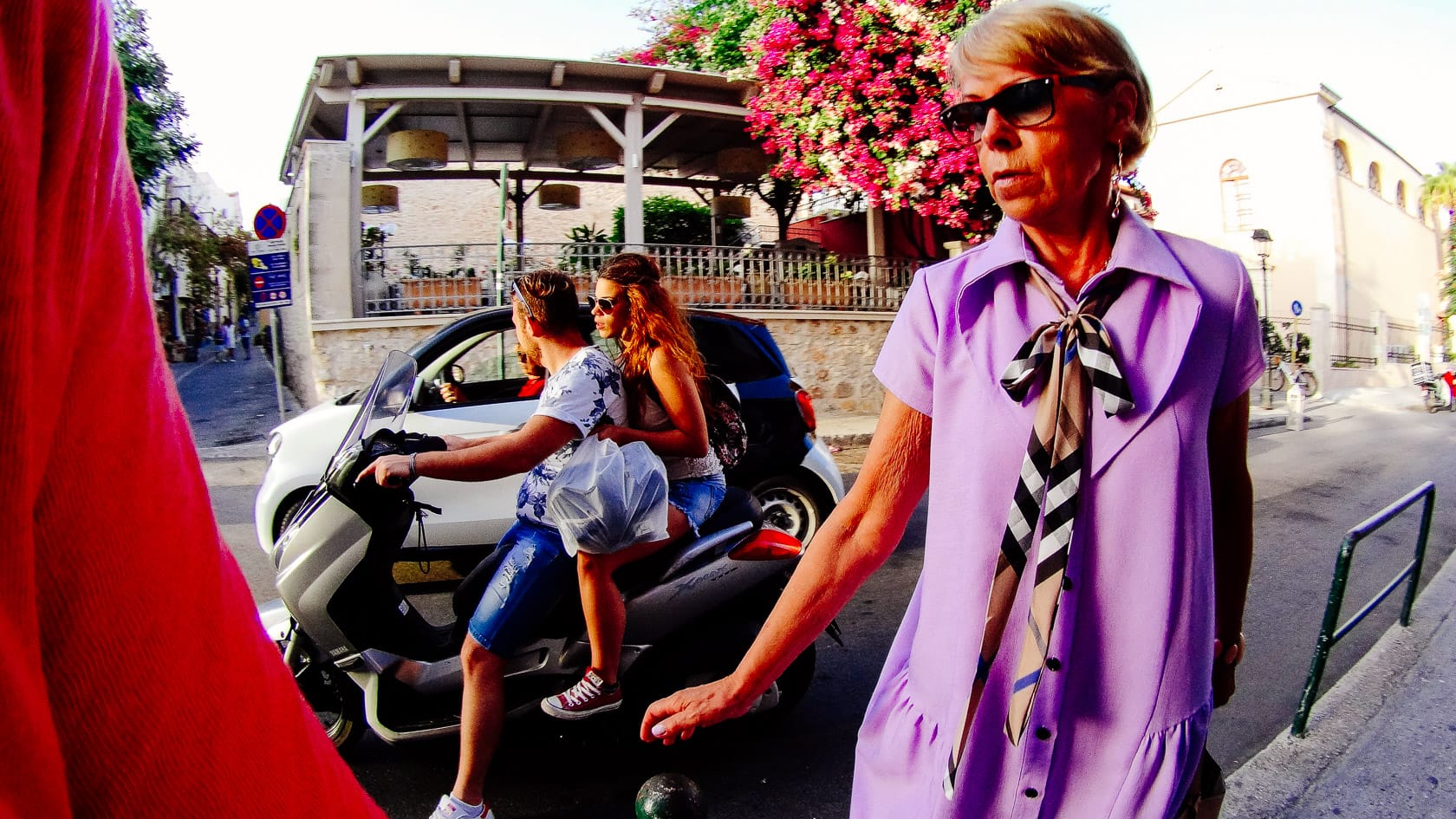 Directly linked to my first learning experience about shooting very close with the Sony, I was consistently shocked and frustrated by how much that super wide fisheye lens kept capturing! Things that I thought insignificant would suddenly loom large in the frame. My finger. My t-shirt. The person standing next to me. All would be swallowed up by the all-seeing fisheye lens. I tried to discipline myself to avoid things appearing in the shot, but that’s not always easy in a fluid environment on the streets. This wasn’t helped by the camera’s poor ergonomics either. In the end I had to resort to cropping a little more than I would have liked, although that did remind me of another one of the reasons why shooting with a wide angle lens is useful. If you really have to, you can always crop a little, but you can’t add things into the frame from a telephoto shot! 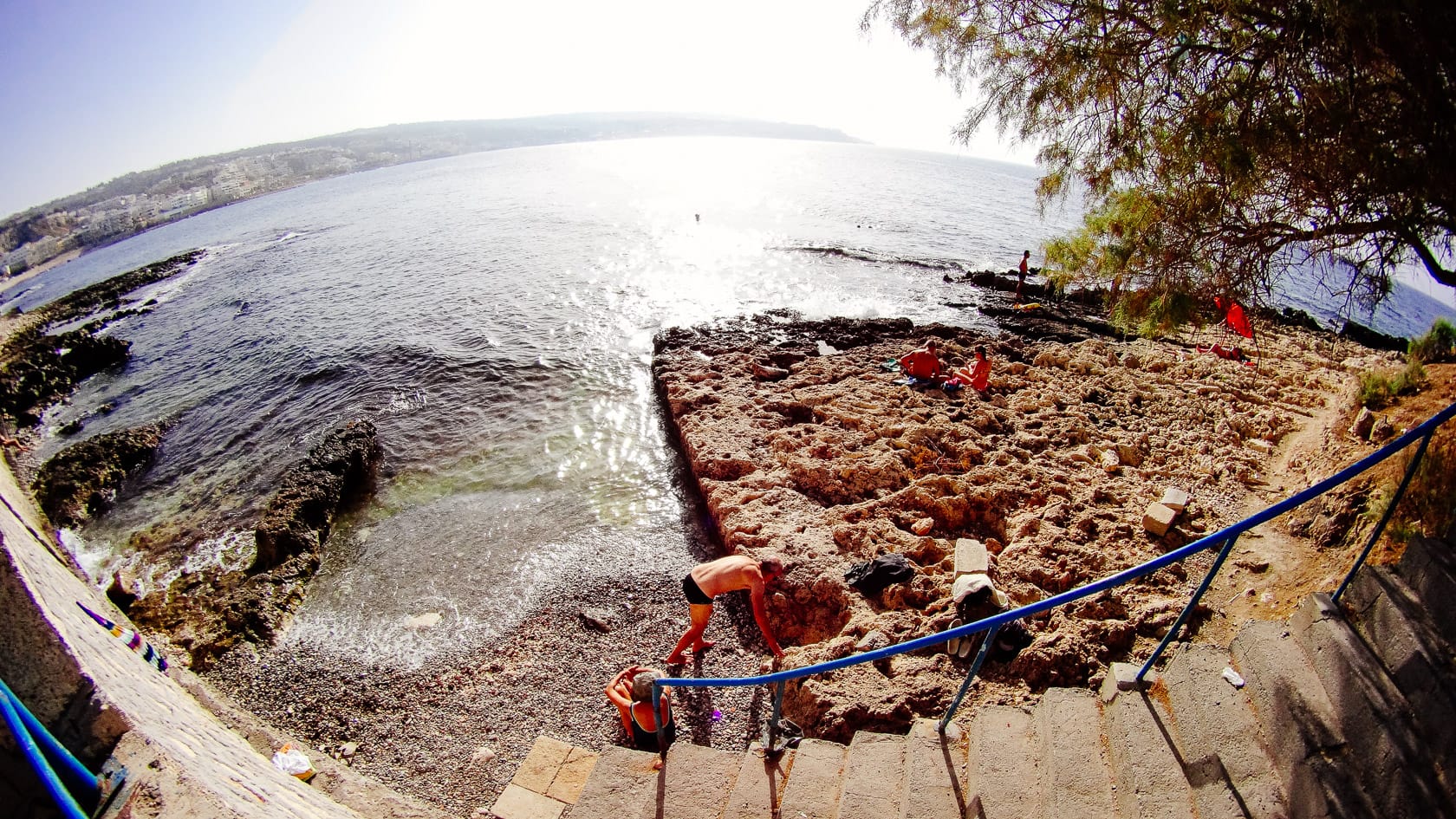 Ergonomics are more important than you think 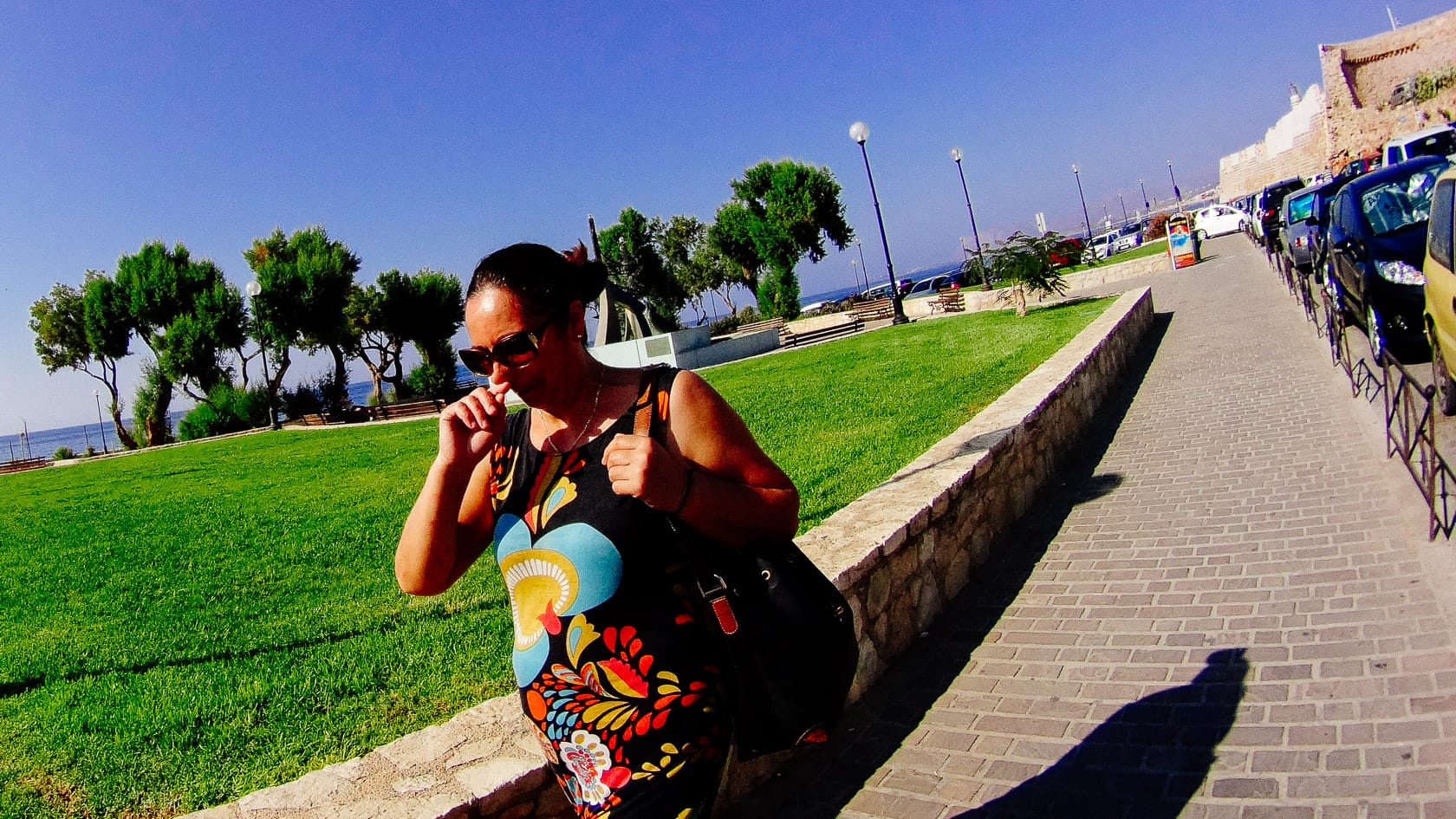 Perhaps my biggest surprise from shooting with the Sony Action Cam was how much it made me miss ‘proper’ cameras. I won’t go too far into the ergonomic design of the Sony – though why they chose to make any video camera with flat sides and a round top and bottom that can’t sit ‘flat’ is beyond me – but suffice to say, the ergonomics for street photography are poor. I shouldn’t be too critical of what is designed primarily as a video camera, but the combination of the shutter button on the back of the action cam and the rounded sides made it a nightmare to hold. It was far too difficult to hold the action cam comfortably (especially without my fingers or hand appearing on the edges of that fisheye lens) and trigger the shutter at the same time. It really made me appreciate the years of evolution that have left us with nice rectangular cameras that are easy to hold with one or two hands, with a shutter button right where the index ‘trigger’ finger is. Of course most other action cams (GoPro for instance) do have a more conventional design so might be better suited to the streets. 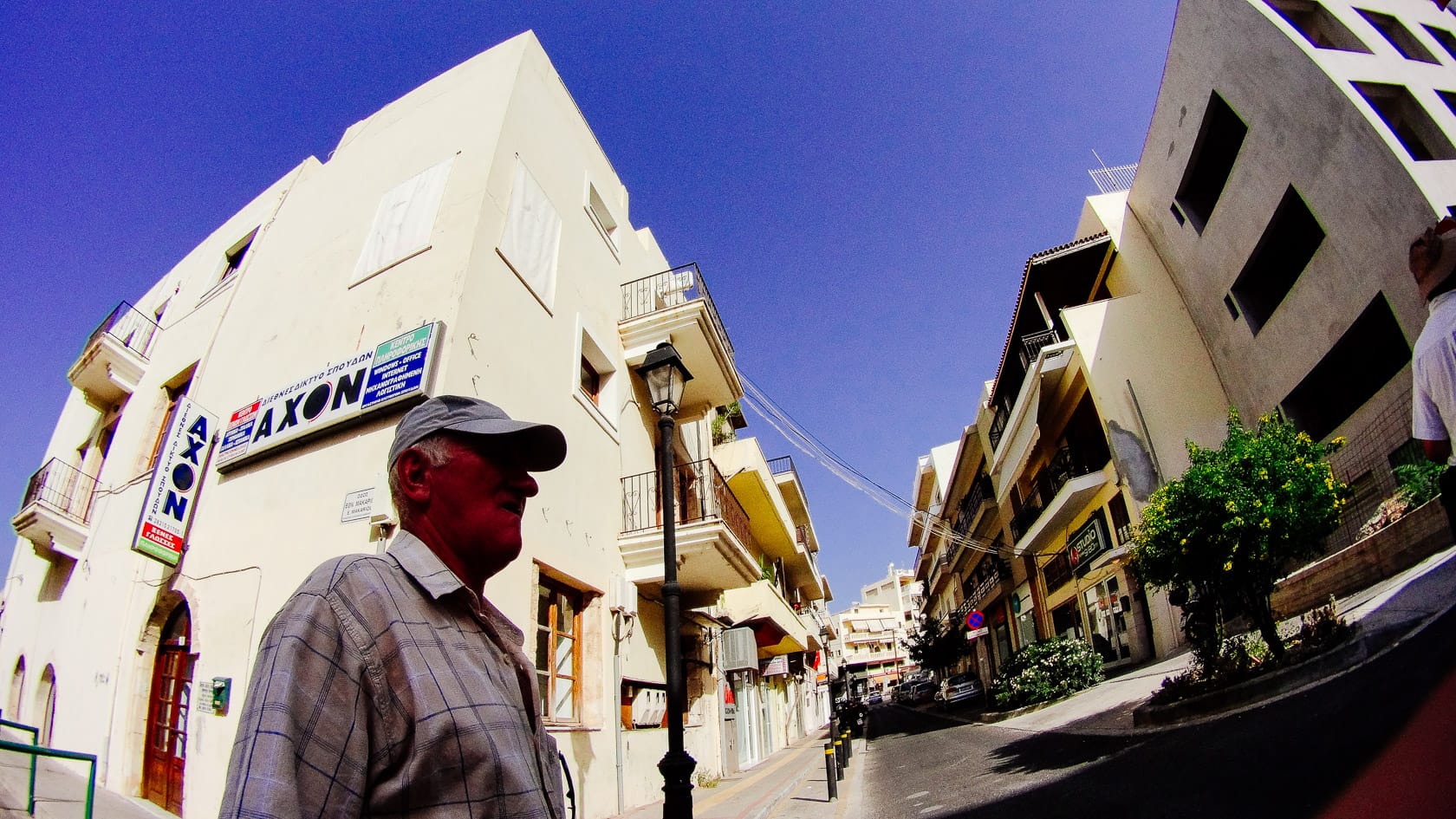 This drove me nuts! I’ve never really thought about shutter lag all that much, perhaps because I have mostly used dedicated cameras for street photography. Even the Fuji X-Pro1, which many people complain about being a ‘slow’ camera, has a hair trigger fast shutter. By comparison, the reaction time to the Sony Action Cam’s shutter is slow, and also erratic. Again, I shouldn’t be too unfair here – this is a device designed primarily for video, but the shutter did lead to me missing a lot of shots and feeling quite disappointed with the results I got. It also offered very little in the way of feedback, compared to the mechanical shutter buttons of my Canon 6D and X-Pro1. The action cam’s shutter was also very unsatisfying to use, and lead me to feel like I wasn’t actually photographing (and, in some cases, I wasn’t, because it didn’t fire!). So, a decent shutter and no shutter lag are absolutely essential in a street photography camera. You’re trying to capture fleeting candid moments, and a laggy shutter simply won’t allow you to do it.

A viewfinder (or similar) really helps 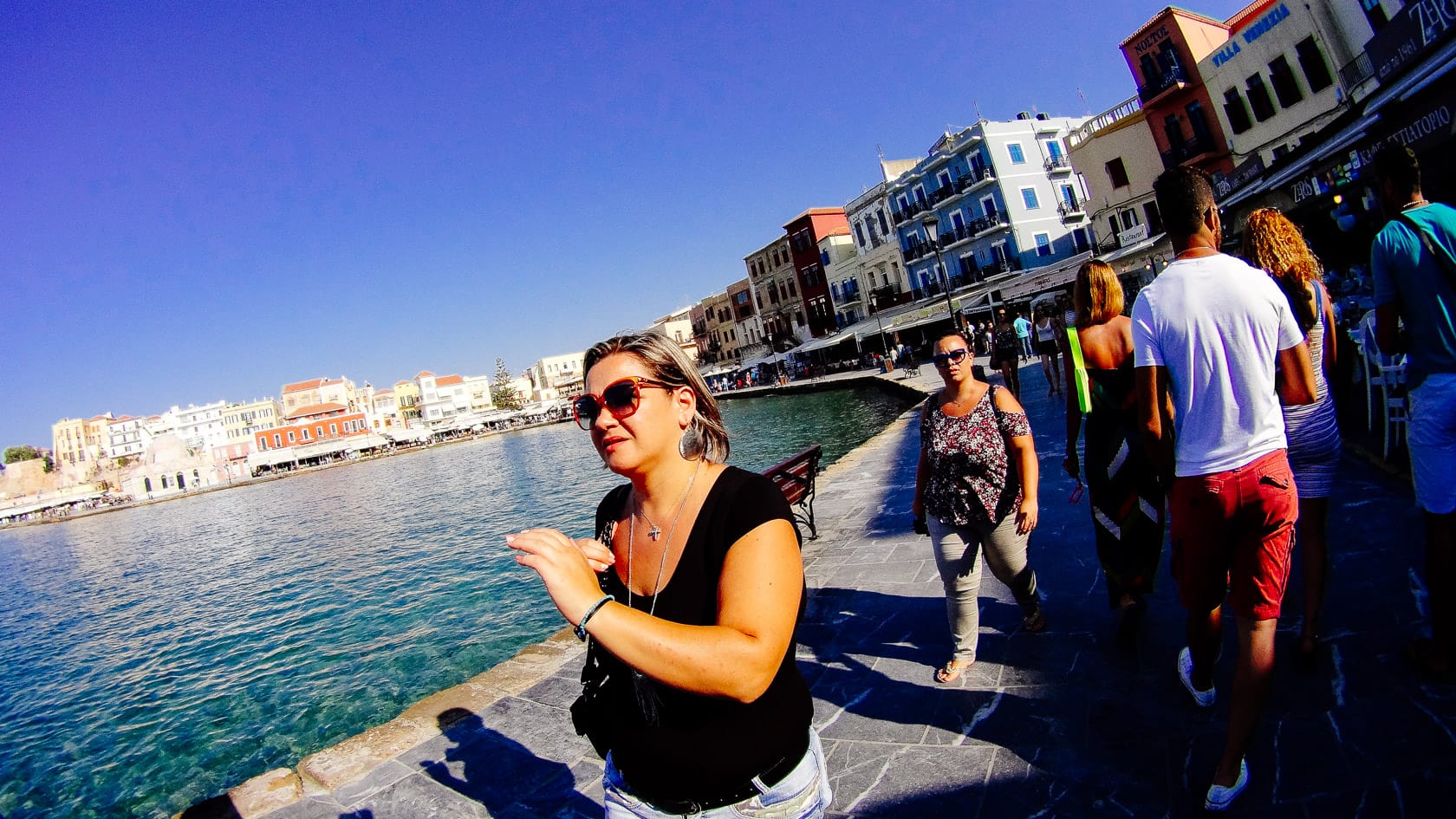 One of the main reasons I wanted to try out street photography with the Sony Action Cam was to see how I dealt with the experience of shooting ‘blind’. The action cam has no viewfinder whatsoever, and only a simple LCD display for the battery meter, and shots remaining etc. The closest I’ve come to a shooting experience like this is probably using either a disposable or lower end compact film camera with their small ‘guide’ viewfinders. Other than that, all the other cameras I’ve shot with have offered either a through the lens view, or a corrected parallax, or a live view of the scene via the rear LCD. So with the Sony I had to rely entirely on visualising the shot, and, as I’ve mentioned already, that was a massive challenge with the super wide fisheye lens. Adding the weird ergonomics into the mix, and it took a lot of focus to hold the camera right and get close to framing well. When you’re using a viewfinder you are always aware of your composition, and even if you’re shooting from the hip without a tilting LCD you can at least check your viewfinder before you move the camera to remind yourself of the framing. No such luck here! Like most modern cameras (including my 6D) the Sony has a Wi-Fi remote smartphone app, but, as with my previous experiences of using such tools, the delay with the video feed, not to mention the challenge of juggling phone in one hand, and camera in the other, makes it poorly suited to street photography. Moral of the story? Always opt for a camera with some kind of viewfinder or rear LCD!

Smaller is better. Up to a Point 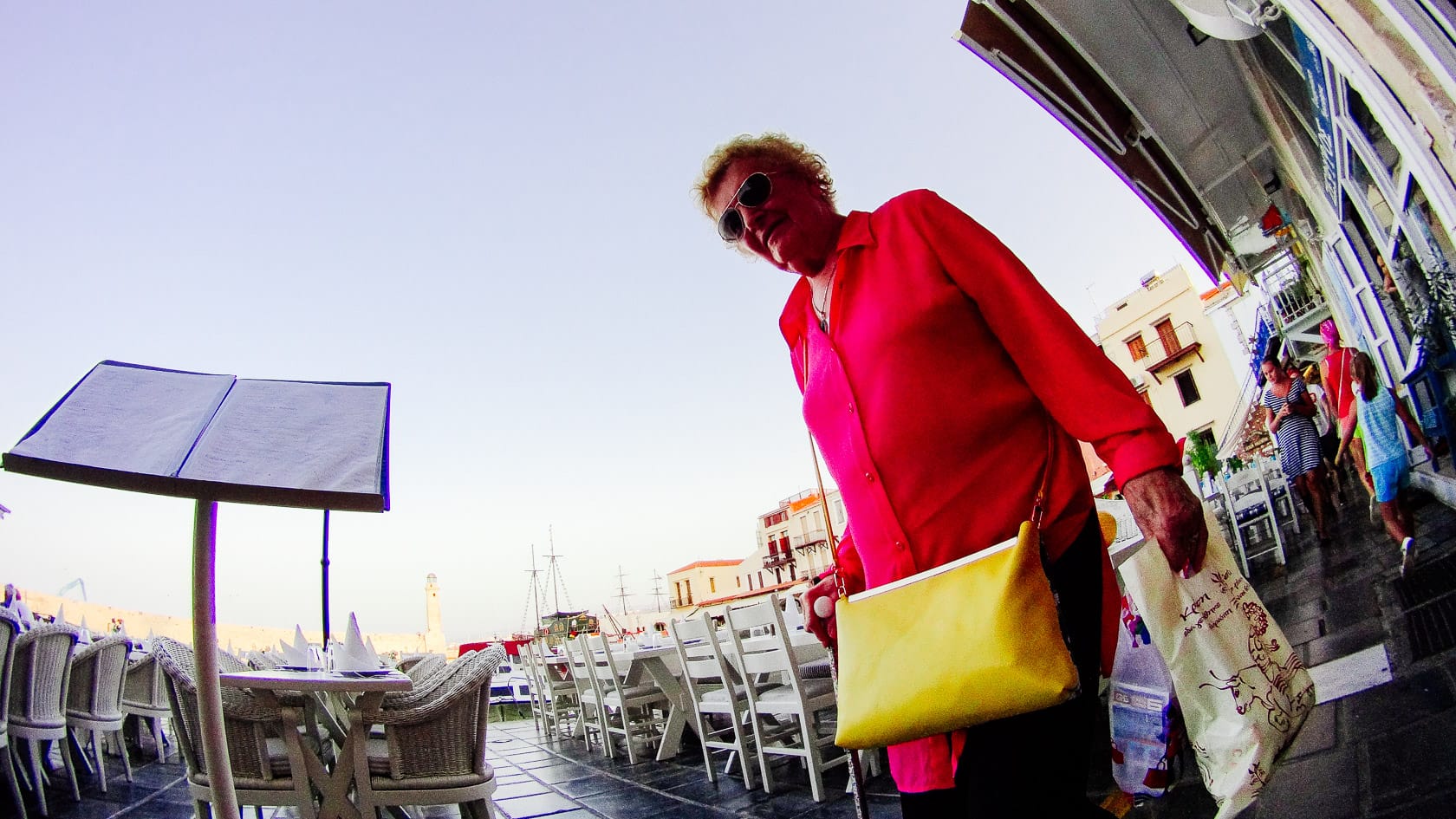 The last thing I learned from street photography with the Sony Action Cam perhaps surprised me the most. As I’ve used more and more cameras for street photography, I’ve come round to the way of thinking that the smaller the camera, the better suited it is to street photography. In fact, it was one of the main reasons why I’ve swapped from a DSLR to a mirrorless camera for street photography. Smaller cameras are not only easier to carry on you all the time, but they are also more unobtrusive too, and less likely to attract attention. The tiddly Sony Action Cam should have been perfect for street photography then, measuring just 80mm x 45mm x 23mm. The action cam virtually disappeared in my hands. However, I found that it being this small was actually a hinderance to street photography. The action cam felt so small that it felt like a spy camera, meaning that photography with it felt almost illicit. There’s a lot to be said for being a subtle street photographer, but the Sony felt way too small and sneaky. Using a camera that is more obviously a camera marks you out as an enthusiast photographer, and proves that you have nothing to hide. An Action Cam is not such a familiar sight in this context, and its tiny size makes it look like you’re up to no good. At least that was how I felt using it, which really surprised me. An alternative would be to use the camera more obviously like a video camera, but I found this drew more attention too. So I learned that there is definitely a sweet spot for street photography camera size and form factor, and the Sony doesn’t quite measure up. Based on my experiences, I think the current sweet spot for perfect size for street photography is around the size of the Fuji X-T10, Ricoh GR or Fuji X70 (watch out for the Street Hunters review coming soon). 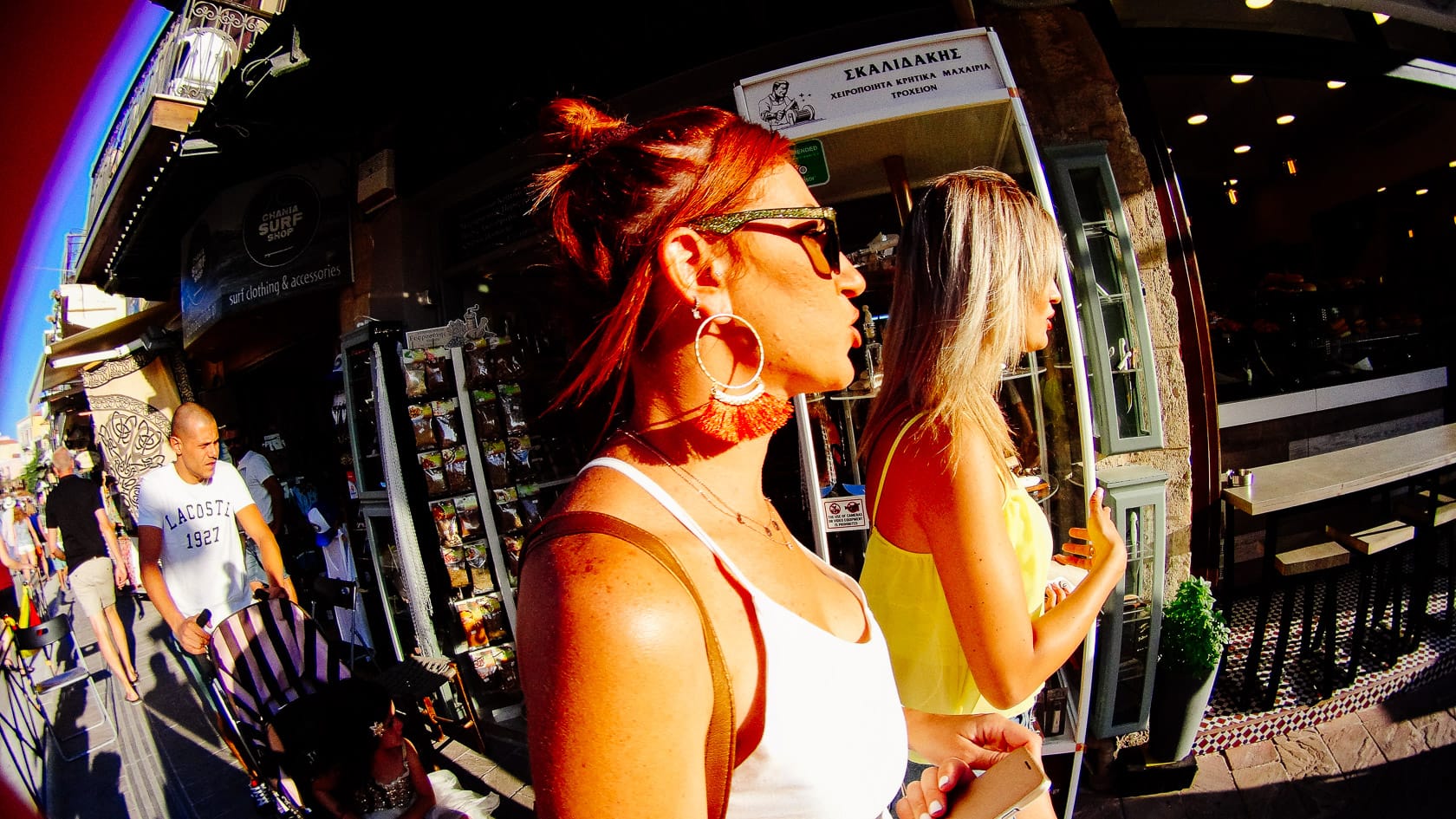 Lessons Learned from Street Photography with an Unorthodox Camera 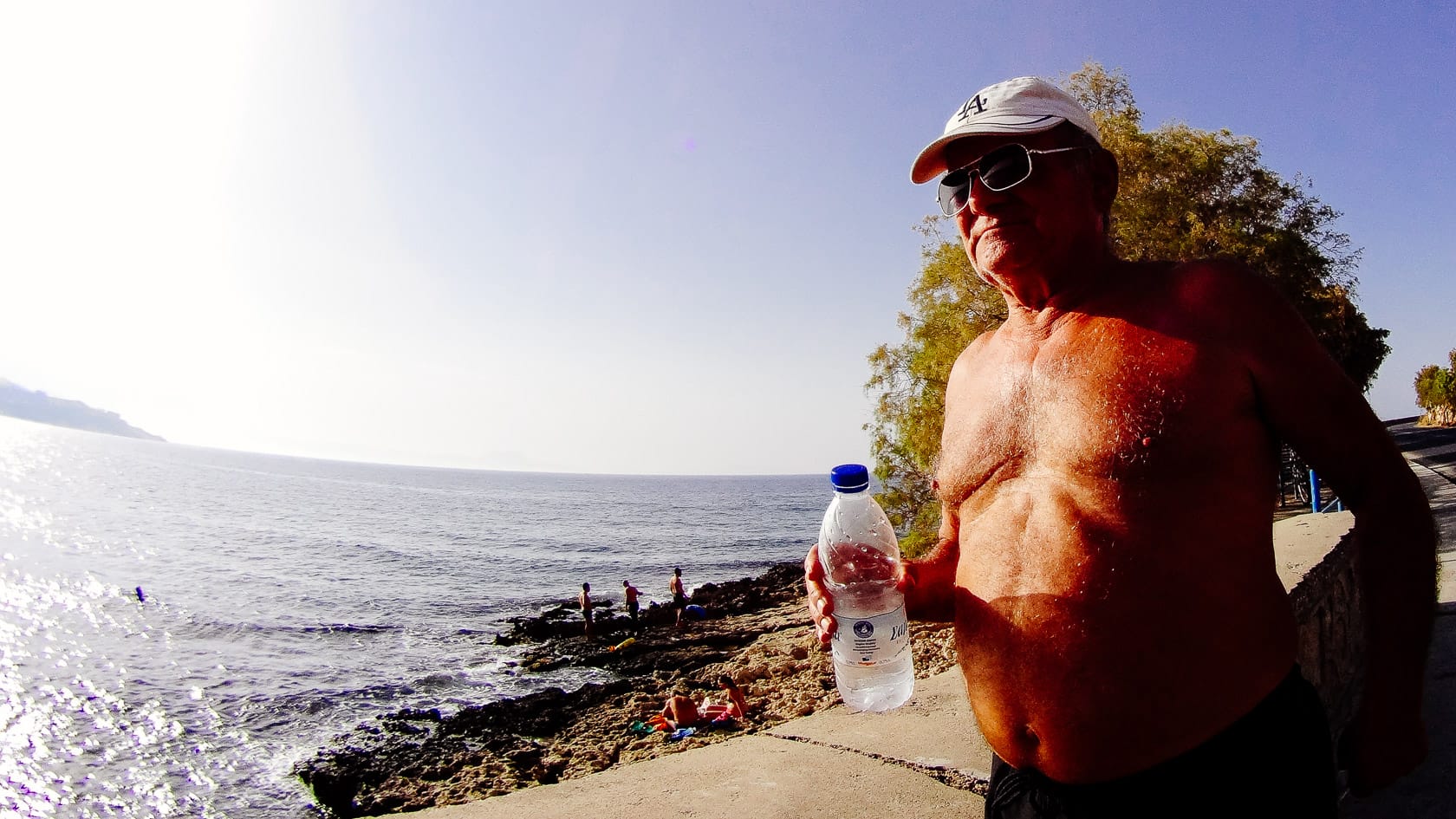 Overall, I’d be lying if I said I really enjoyed the street photography experience with the Sony Action Cam. I felt like I was missing a lot of photo opportunities, and I couldn’t wait to start using my X-Pro1 again! Looking at the downloaded shots on the computer later, I was also a bit disappointed with the results, though there was nothing wrong with the quality of the photos the action cam was producing. All that aside though, the Action Cam did leave me with some interesting effects, and I’m glad that it forced me to experiment with ultra wide fisheye lens street photography, which was also a new experience for me. It has encouraged me to try and shoot closer to my subjects, and potentially try a wider lens (perhaps a 24mm) in the future. My shots did begin to improve a little as time went on, so clearly I started to adapt (slowly) to the camera. Most of all, the Sony Action Cam taught me to appreciate how great modern cameras are for street photography, and that, with some practice, you can overcome the idiosyncrasies of some equipment and see your shots improve.

Have you tried shooting street photography with an unusual camera? Leave us a comment below!