The street photo submitted for Crit My Pic consideration this week is called ‘Man with the Hat’, and it has been shot by Andrew E. Brown. I’m going to review the photo by the usual Crit My Pic protocols, which are point of view, focal point, composition, exposure, subject matter, and mood. There are lots of street photographs still pending for Crit My Pic, but if you’d like to make your own submission, you can read the rules at the bottom of page and then email us your photo. Here is the Crit My Pic analysis of ‘Man with the Hat’. 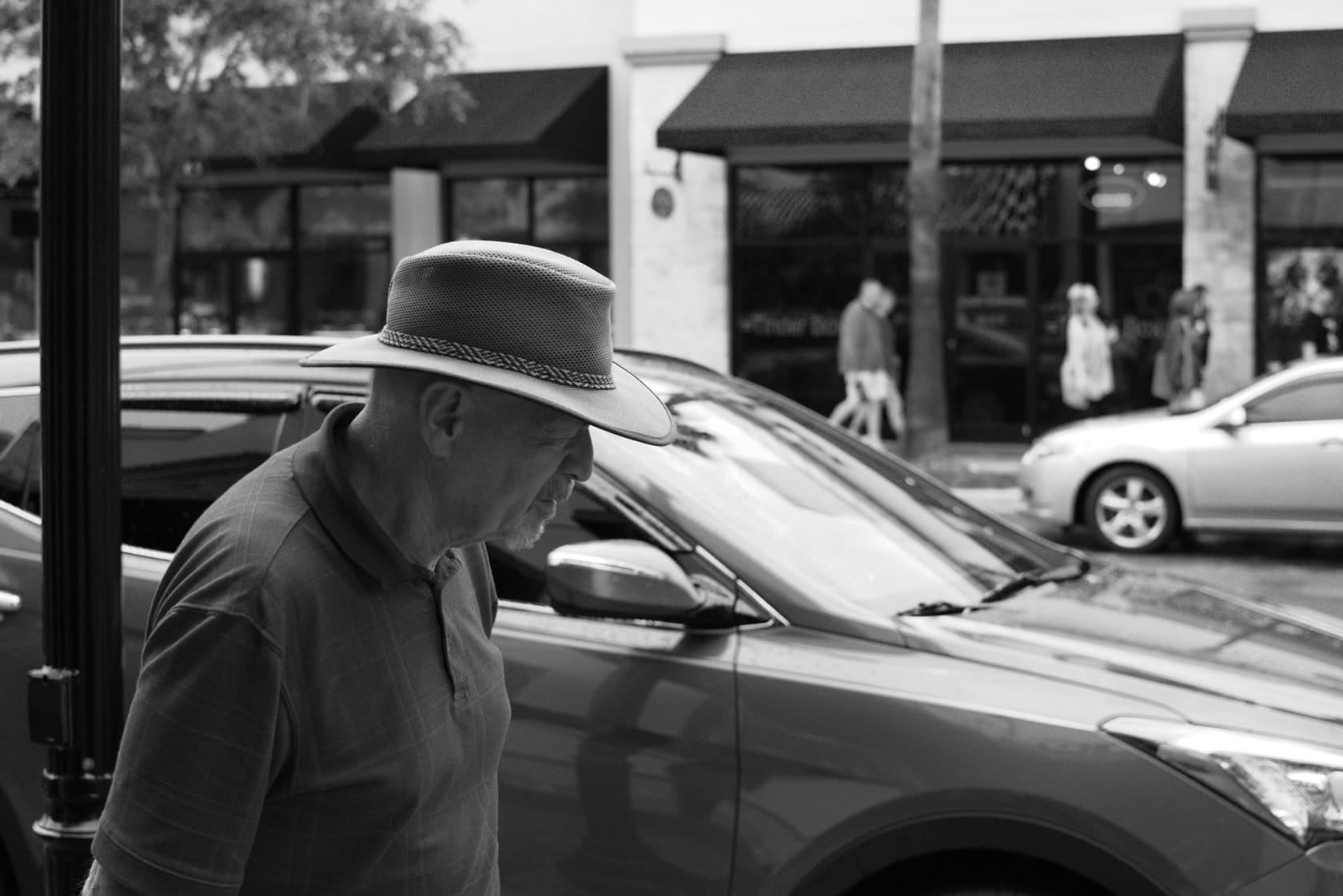 I get the impression that ‘Man with the Hat’ was shot from around standing head height. It has the feel of a shot that Andrew either took whilst passing his subject, or as the man passed him as he stood in his position. The photo is shot side on, so that the man appears to be walking ‘into’ the frame. We see lots of street photos shot in this style, and I feel this is a point of view that can work very effectively, provided the background of the shot isn’t too busy. I tend to default to taking photos from this point of view a lot myself. In the case of ‘Man with the Hat’, I think the background is very busy, and I will discuss how that affects the photo more later. I also feel that the point of view in this case doesn’t do anything to make the shot more exciting, so an alternate or unusual one could be a benefit.

There is little question about what the main focal point of ‘Man with the Hat’ is – he is, after all, wearing a hat! He is placed well in the frame to be emphasised as the focal point (I will discuss more on this later), and Andrew has done very well to get close to him – making him all the more prominent in the frame. If I was going to make a suggestion for improvement it would involve the car in the background, which I find a distraction. But more on that later.

Compositionally, ‘Man with the Hat’ is strong in terms of how Andrew has used compositional effects around his focal point. You can see from the rule of thirds grid overlay that the man’s head sits on the first third vertical on the left. His body also covers that first ‘third’ of the frame as a block area of negative space. Better still, his head and hat are also positioned on the axis where the first horizontal third from the top and that first vertical meet. All this creates an appealing aesthetic that also emphasises the focal point. With the man’s positioning in this portion of the frame, we also see that his hat fits around the ‘golden ratio’ point (the blue circle). Again, this means the shot has a nice balance. I also like the two strong vertical ‘poles’ – one on the left of the frame behind the man, and the other (possibly a tree) in the background, positioned almost on the second vertical third. I like how this tree creates a sense of opposites, both against the lamp post on the left, and also the man in the hat who himself is on a ‘rule of thirds’ vertical – creating a nice balance.

However, it would be remiss of me to talk about composition without mentioning the proverbial elephant in the room. That is the car in the background. The car right at the back of the frame is a slight distraction, but I feel that the large car in the foreground directly behind the man is the real culprit. There is no getting away from the fact that it clutters the background of the shot, and really draws focus from the man as it forms such a solid area of negative space. Andrew has done what he could with the composition to try and improve things – notice how the chrome line from the wing mirror rises to meet the man’s nose – but it still is too distracting. I think the shot would be far more powerful without the car there.

There aren’t any particularly dramatic lighting effects in ‘Man with the Hat’, but what we do have is some nice muted grey tones that give this street photo some subtlety. It has certainly not been over-processed or overblown and the photo is all the better for it. I particularly like the way the skin tones on the man’s face are rendered and his hat. In this case too, I think monochrome suits ‘Man with the Hat’ well. If I were going to make a suggestion, I might say that perhaps Andrew might have tried raising his exposure by a third or half of a stop in order to give us a bit of a better lit view of the man’s face. That said, I don’t know about the dynamic range of the camera Andrew used – perhaps his background would have become overly bright as a result. He could of course try achieving a similar result in post-processing, but using the dodge tool very subtlety on the man’s face only.

With regards to subject matter, you can begin to see why Andrew chose this man as his subject matter. While his clothes aren’t particularly eccentric, his unusual hat does inject an element of interest, and his face has an interesting mix of lines, as well as character. He is the sort of subject who looks like he might have an interesting background, and one I would look to include in one of my own street photos. Ideally with a character such as this I would like to see him either head on in order to see more of his face, or directly side on in stark minimalist style to emphasise the shape of his hat. As it is, I’m not sure that we see enough of him to really seize our attention and keep it focused on the image. He just seems to be walking down the road and that is that.

Despite the fact I’ve mentioned that the ‘Man with the Hat’ is just walking down the road normally, that is one of the elements that creates an interesting mood in this photo. I quite like how his unusual and traditional style hat (almost cowboy-esque) contrasts with the archetypal modern street scene around him with the cars and more conventionally dressed figures in the background. It makes our ‘Man with the Hat’ seem a bit of a fish out of water, and adds some mystery. What is he doing there? What is his story? Is he really eccentric like he looks? These questions are fantastic in a street photograph as they help to maintain our interest. 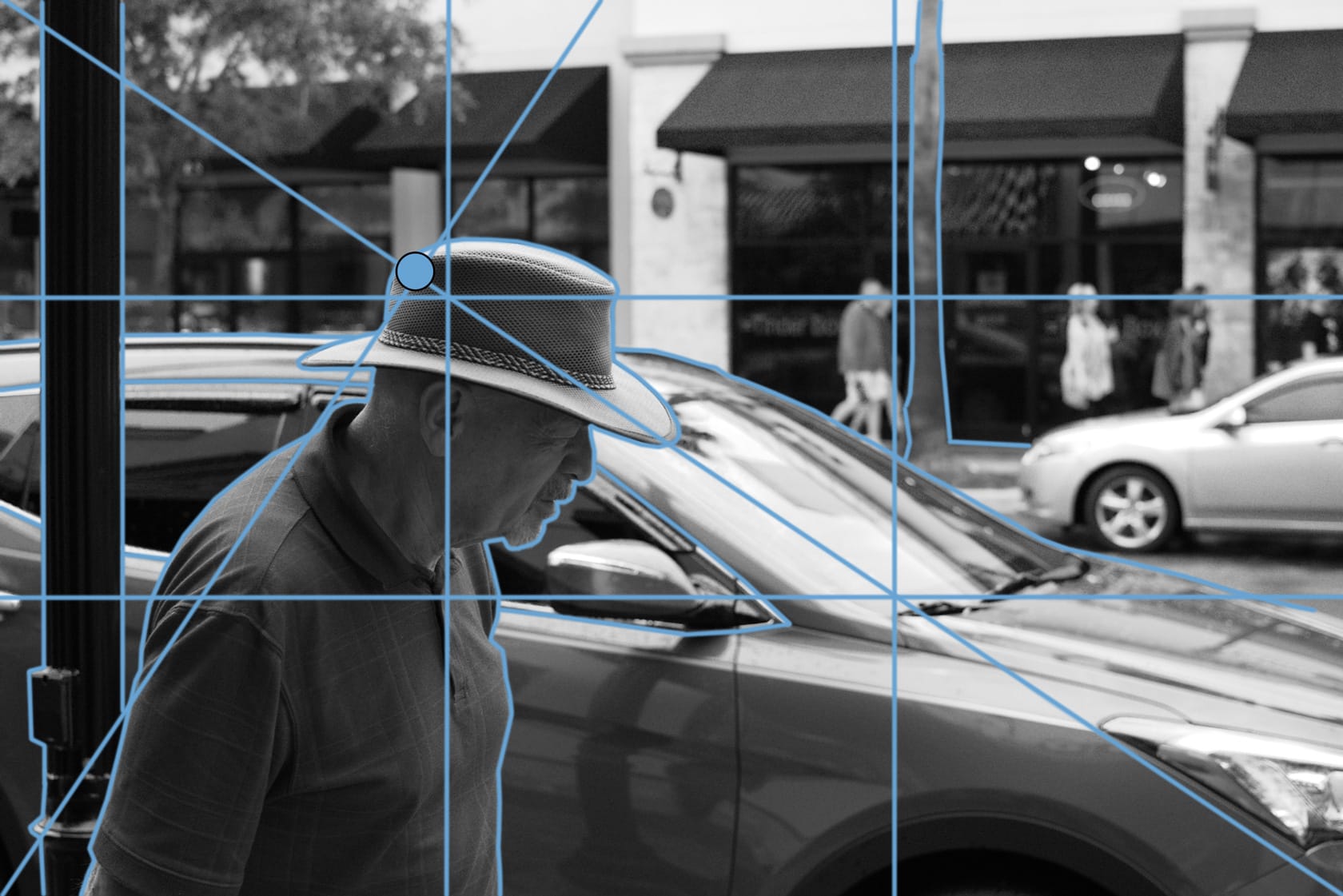 In conclusion, there are several elements I like about ‘Man with the Hat’. I think Andrew chose quite an interesting subject, and did well with some of his composition, as well exposure, and created a nice mood. He also did very well to get as close as he did to his subject, which requires bravery and commitment. However, I think perhaps Andrew focused too much on seeing his interesting subject, and not enough on the issues caused by the background. He ended up having to work around the limitations of the background, and ultimately the effectiveness of the shot suffers a bit I feel. With some tweaks and more of a focus on the aesthetic, I think this could be a much stronger photo. Andrew has already achieved the really difficult part in picking his subject and getting in close, so he’s just got to keep at it and watch his backgrounds and his street photos are going to go from strength to strength.