Kathy Zieben has submitted the street photo for Crit My Pic this week, and the photo is called ‘Looking’. The format and layout of Crit My Pic is tried and tested, and it involves analysing our submitted street photos by point of view, focal point, composition, exposure, subject matter, and mood. We’ve got a decent pile of submissions for Crit My Pic for the coming months, but if you have a street photograph of your own that you would like to be considered for Crit My Pic at some point in the future, read the submission rules at the bottom of the page and then email us your photo. On to the analysis of ‘Looking’… 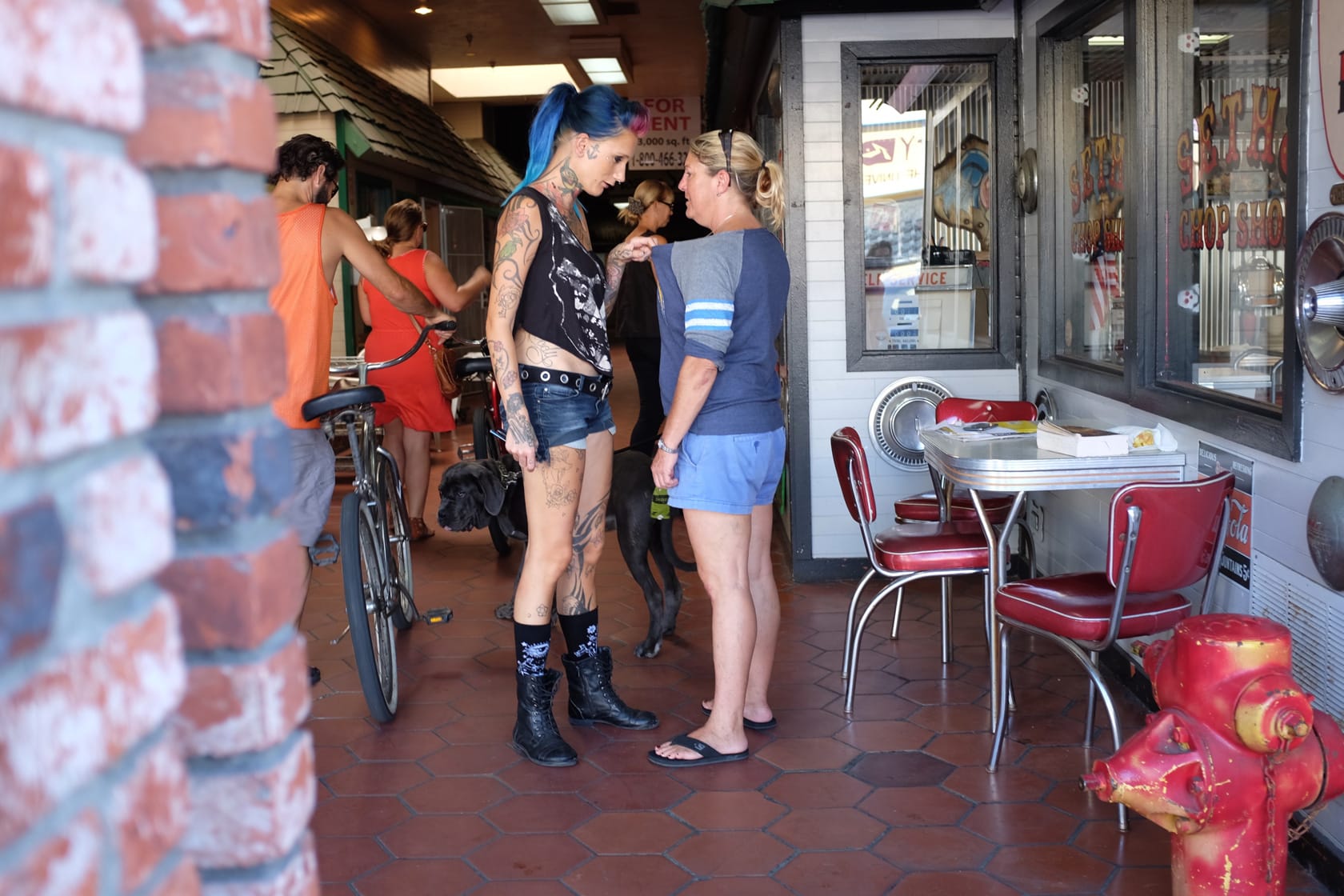 I think I would say that ‘Looking’ was shot from just below normal head height, or perhaps head height itself. As I’ve mentioned several times before, this point of view isn’t particularly radical, but it is a very popular one, and for good reason. What makes the point of view in ‘Looking’ interesting is the position Kathy was standing in when she took the shot. From the brick wall to the left of the frame we can see that she was standing outside the building where the ‘action’ was. This adds an extra element of interest to the photo, as we as viewers feel like we are ‘peeking’ in on the room with Kathy, giving ‘Looking’ a slightly voyeuristic feel.

All in all, the focal point of ‘Looking’ is fairly clear and well defined. It is the two women facing each other, and they are standing right in the centre of the frame! Their positioning, their ‘exchange’ (and more on that later), and the fact they are the only two figures we see in their entirety in the shot, further emphasises them as our focal point. It helps too that there is a common hue (blue) linking them together that isn’t found anywhere else in the shot. That said however, I think the frame in ‘Looking’ does verge on the busy side. It’s not a problem to have lots going on in a street photo if we get a sense of layers and a visual ‘journey’ to lead us around the frame. In this case though, I find the other figures in the frame slightly distracting, and, other than the man with the bicycle, I’m not sure how much they add to the overall ‘story’ of the photo.

Our focal point(s) in ‘Looking’ are in the centre of the frame, and I think that is the right choice for the photo, as here they are most prominent. If we look to the left hand third of the frame, we can see the nice area of negative space created by the brick wall that occupies the majority of this area. This provides a nice frame for the photo and also helps to focus our eyes. This negative space is balanced out to an extent by the right hand side of the frame too, by the grey wall and chairs. This means our focal point is framed on both sides by blocks. The fire hydrant in the bottom right hand side of the frame is a nice mirror to the brick wall too, and provides an interesting shape and point of interest. The lights at the top of the frame help to lead our eyes toward the two women in the centre of the frame too. Overall, Kathy uses all these compositional effects well to help focus our attention on the women as the focal point. The only suggestion I have returns back to the point I made about the focal point earlier – I find the other figures a little distracting. Without them I think the composition would be stronger.

The exposure in ‘Looking’ is nicely balanced, and that must have been no mean feat, especially as Kathy and her camera would have been outside in bright daylight, shooting inside into the ‘relative’ gloom. The diffused daylight provides a nice soft lighting effect on the two women, whilst also helping to make the colours in the photo stand out. Towards the background of the frame we have an interesting effect where artificial lighting takes over from daylight to light the very back of the room. Kathy made an excellent choice to shoot ‘Looking’ in colour as it provides benefits both in terms of interest and composition. As I’ve said already, the two women who serve as our focal point are tied together and also emphasised by the colour blue. It features in the tattooed woman’s hair, and on her shorts, and in the top and shorts of the blonde woman. This is the only real appearance of this hue in the whole frame, which helps to focus us on these characters as focal points. I also like the red, which appears in the bricks on the left, and in the fire hydrant and seat cushions on the right side of the frame. Despite my earlier complaints, at least two of our ‘erroneous’ figures are in orange, which does help to link them to the brick wall, chairs, and hydrant. Finally, shooting in colour has helped to emphasise the cool grey sheen of the metal in the shot, provided by the chair legs, table and hub caps, and nicely lit by the diffused daylight. Well done Kathy!

Given that we know our focal point, we can divine a little about our subject matter, though much still remains a mystery. The two women are clearly having an exchange, and the tattooed woman is pulling at the blonde woman’s top in order to have a look down it. We don’t know why! The facial expressions of the two women (more on this later) are hard to read too. So everything is rather mysterious. And then we have the location itself, which from the chairs has an appearance of a diner of sorts, but the sign on the glass of the wall says ‘Chop Shop’. But why the extra figures, and particularly why the man on the bicycle? I can see why Kathy wanted to capture this shot, as it is an unusual scene. However, all that aside, and despite so much seemingly going on in ‘Looking’, I must confess I am searching for a little more. The exchange between the two women is odd, but it is not wholly arresting and memorable. The scene and location itself is interesting, but again, not quite powerful enough. I think perhaps ‘Looking’ would work better with either more simplicity and immediacy (i.e. shooting closer) to the two women, or with the same point of view and location, but a simpler scene. As it is, I think our subject matter is rather left a little diluted and fighting with our scene and background.

All my points about the mystery and enigma of ‘Looking’ stand for the mood too. I like the mystery and confusion that is created by this shot. I like the tattooed woman’s curious expression, and the blonde woman’s slightly aggressive stance. Zooming in, I can see that the blonde woman is staring directly ahead, with her teeth and jaw set. What on earth is going on? Were it not for the tattooed woman’s expression, you might think their exchange confrontational! This sense of mystery and undercurrent of hostility (though that may be just my interpretation), really make the mood exciting. Then there is the incongruous bicycle, and ‘conventionally’ dressed other figures too. Not forgetting the dog too – presumably he belongs to one of the women. So, ‘Looking’ asks way more questions than it answers, and in this case I think that is a good thing. Mystery and questions help to keep us engaged in a photo! 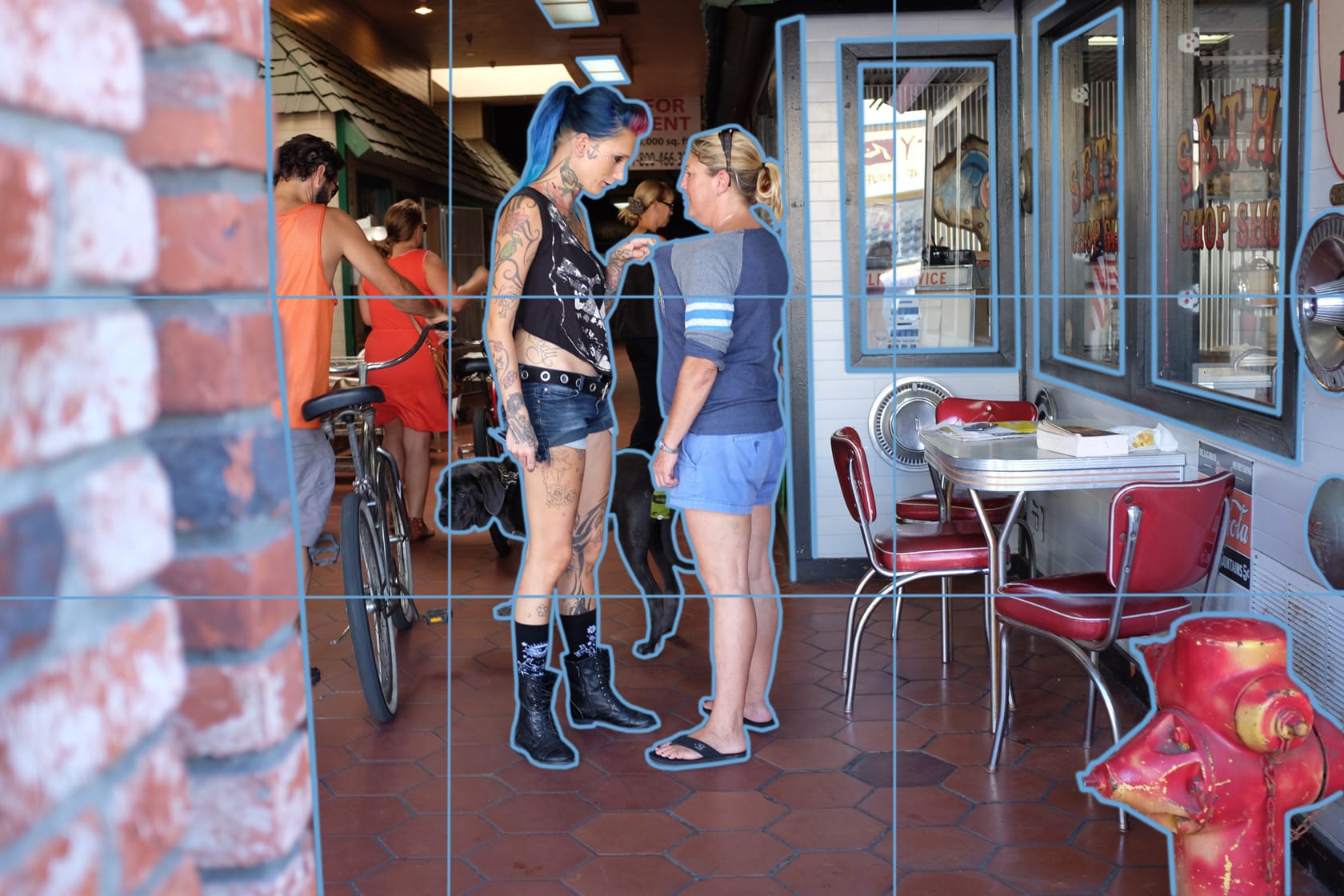 Overall, I quite like the point of view, composition, exposure, colour, and especially the mood in ‘Looking’. There are several different versions of the photo I’d like to see though. One would be the same scene but without the people in the background. Another would be a closer up version of just the two women, making us feel more ‘involved’ in their exchange, and providing a sense of immediacy. And finally, I’d like to see this location used, but in a much simpler way. Perhaps with a lone grizzled bearded rocker sitting in one of the diner chairs? I think as things stand there may be a little bit too much going on in ‘Looking’ to really make it a powerful street photo. Kathy has shown a great eye to spot both an interesting location and an unusual scene, so now it would be great to see her lock things down with more simplicity for visual impact. Perhaps she could try a project working around this location, and some of the characters who hang around there?