The street photo to be analysed for Crit My Pic this week is called ‘I’m on Break’ and it has been shot and submitted by Roman Lopez Jr. The format for Crit My Pic is now well established, but if you’re new to the feature, I analyse each street photo in terms of point of view, focal point, composition, exposure, subject matter, and mood. I will also make any suggestions I can for improvements. We’ve got a nice lot of submissions currently for Crit My Pic, but if you’d like one of your own street photographs considered for this feature, you can read the submission rules at the bottom of the page and email us your photo to be analysed. 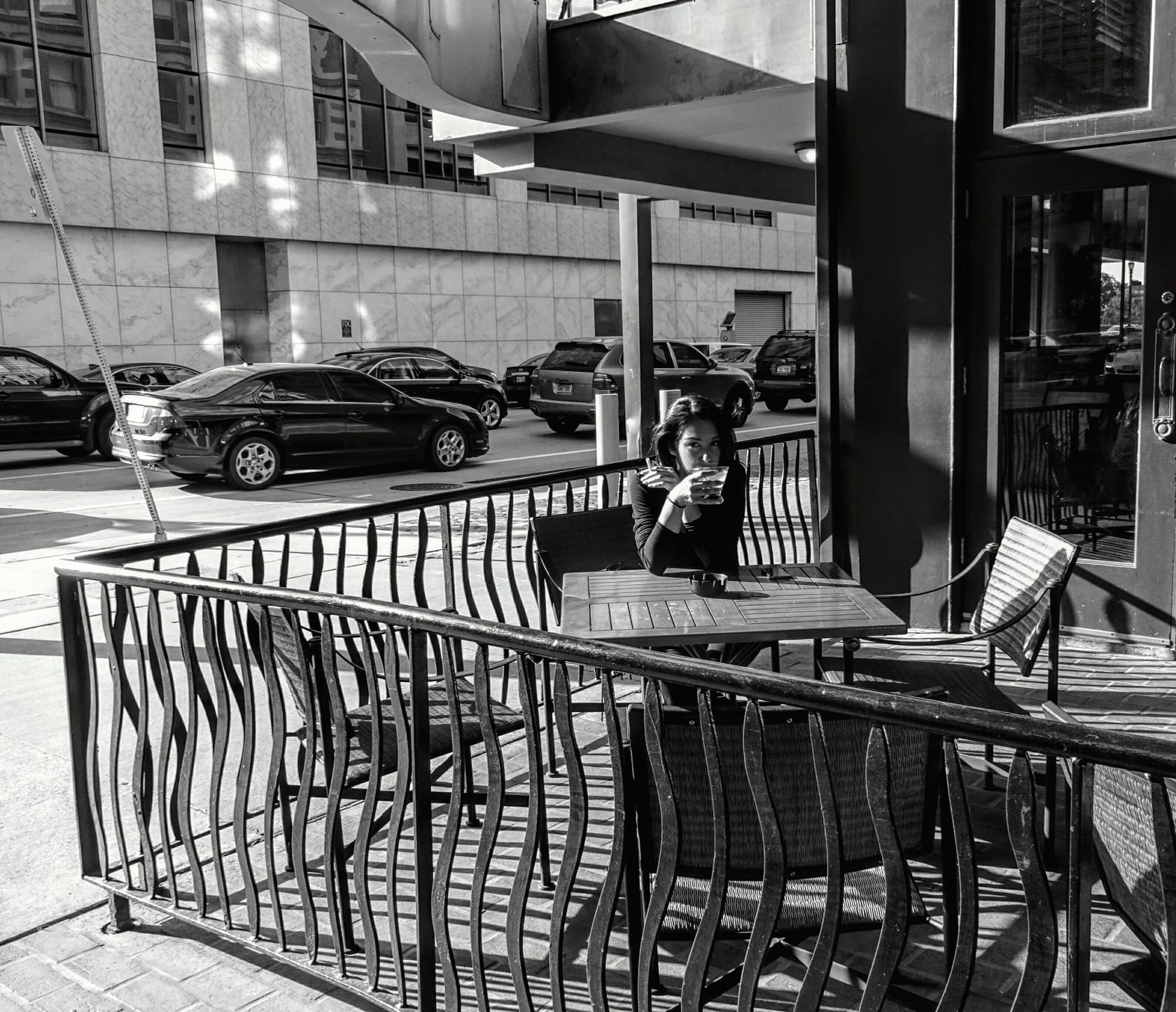 I would say the point of view in ‘I’m on Break’ is probably about normal head height. Our focal point (more on that later) is a little low, so I get the impression Roman was standing up and a little distance from his subject, pointing his camera down slightly. The point of view makes us feel like we are walking down the street with Roman and glance across at the woman having her coffee in the cafe. This is an ok point of view, but it doesn’t add any drama or immediacy to the photo. Not a problem in itself of course, but the feel of the photo could be very different with a closer point of view or a lower one.

There is only one figure in ‘I’m on Break’, and her position amongst the sea of man made lines of the building, railings and table in the centre portion of the frame makes it clear she is our focal point. That said however, this is a busy street photograph, and while the woman is our focal point if I am being critical I should point out there are lots of features in the frame vying for our attention. One particular one is the vertical pole just to the left of the woman. Others are all the cars on the left hand portion of the frame. While they do help to point towards our focal point (more on that later), there is no getting away from the fact that they form a solid mass of material in the left portion of the frame, and as such draw our eyes away from the woman. I appreciate there is little Roman could do about this realistically – he is in a busy city after all – so his alternatives would have to be to compose differently to minimise the distractions of the cars, and use them more as a background feature. One option might be to shoot from a different angle perhaps, although that would affect his leading lines.

I think it’s very clear that Roman has a good understanding of the importance and effectiveness of leading lines, and he demonstrates that skilfully in ‘I’m on Break’. In this square crop, the ‘triangle’ of the railings dominates the lower portion of the frame, and leads our eyes from the bottom right of the frame all the way to the left. Once we are on the left of the frame we’ve got a host of converging lines running from left to right. These include the railings, the pavement, the road, the building on the left, and the row of cars themselves. All these serve to pull our focus into the centre of the frame where the woman is sitting. She represents an organic shape in a sea of heavy man made lines. The table she is leaning on creates a nice area of negative space that isn’t distracting, and is helpful in emphasising her as the focal point. Ideally we’d have some kind of negative space behind her to serve the same purpose too. Speaking of negative space, the building on the right and top of the frame forms a negative space block too, which is a nice foil for the business in the bottom and middle left of the frame.

I like the exposure in ‘I’m on Break’ as it lends the shot some drama. Low, powerful sunlight is streaming across the frame from the left hand side (probably from a gap between buildings) and casting long shadows from left to right at about a 45 degree angle to the main leading lines. The effect of these shadows from the railings in the lower portion of the frame is quite interesting and creates a nice criss cross effect – perhaps something worth experimenting with as a small feature in other photos – perhaps as part of a series? The main impact of the power and position of the light in ‘I’m on Break’ is of course in the lighting of the focal point. It illuminates the woman’s hands – they are crossed to form an interesting shape too – as well as half of her face. Some may say that she is not well lit enough – but I think Roman’s exposure choice here is spot on as it leaves so much of her face in shadow, altering the mood of the photo in a positive way.

What is our subject matter in ‘I’m on Break’? The title alone gives us quite a clue – we’re seeing a woman enjoying a cup of coffee on her own in a city. The fact she is on her own in a busy scene makes us question exactly what she is taking a break from – a quick coffee to drink during her work break, or a quest for solitude in a massed heaving metropolis. If it’s the latter, then the business and distracting elements in the frame that I spoke of earlier start to make more sense in this context. However, people drinking coffee in cafes in cities is a very popular and common subject matter for street photos. That’s no problem of course, but in a sea of similar images it means you really need to add punch to stand out. One of my favourite works of art is Edward Hopper’s

‘Nighthawks’ painting of a diner, and I would suggest Roman take a look at this and think about the effect it creates through its mood, but also its composition. I appreciate it is a quieter and simpler scene than Roman is focusing on, but I feel ‘I’m on Break’ needs a little more simplicity in order to raise its impact as a photo.

When all the elements of ‘I’m on Break’ come together, some interesting points about the mood are raised. As I mentioned above, we don’t know exactly what the woman has taken a break from, and the idea of a lone figure in a busy city, while a little cliched, is something perhaps worth exploring as part of a project. Our sense of mystery is further heightened I feel by the lighting in the shot, and particularly the way so much of the woman’s face is obscured by shadow. Without being able to see all of her face clearly she becomes more mystical, and this serves to heighten the sense of mystery about her. Overall, the mood here helps to make the photo more interesting. 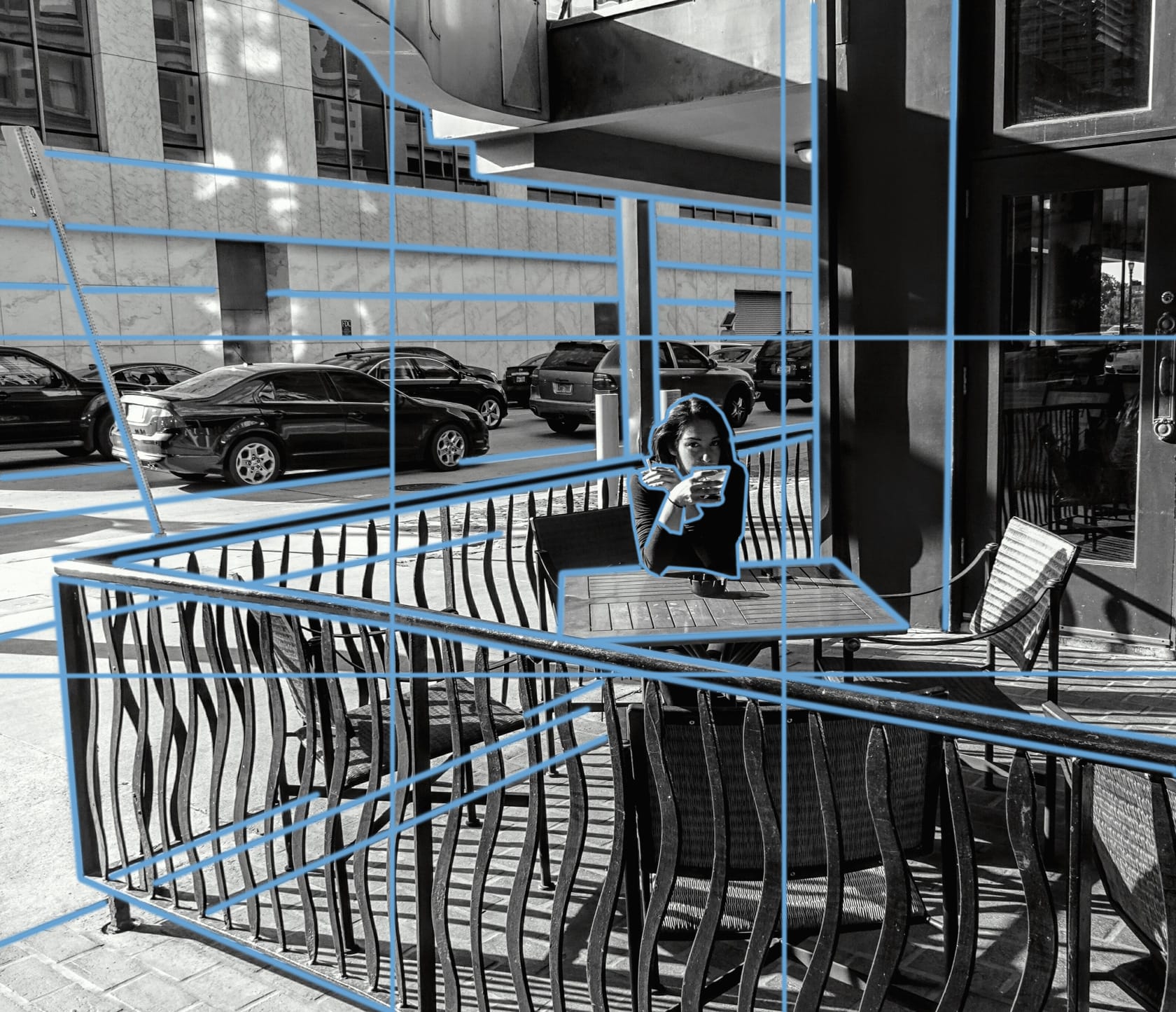 To conclude, I feel that ‘I’m on Break’ has some interesting elements – most notably, the leading lines, dramatic lighting and exposure, aspects of the subject matter, and the mood. I think Roman has happened upon a good focus here: solitude in city, cafe scenes, a corner – but what scenes like this require I feel is an injection of more visual flair to make them more powerful and arresting. I think that visual flair in this case would mean more simplicity in composition and less distracting elements. Once we have some more art for art’s sake, I think we will start to see some much more powerful street photos.