‘New York’ is the title of the street photograph to be analysed for Crit My Pic this week, and it is a photo that has been shot by Norah Fernandez Yegros. As usual, I’ll examine the photo by the usual criteria: point of view, focal point, composition, exposure, subject matter, and mood. I’ll make any suggestions I can think of for ways in which I think the photo can be improved if possible. If you have a street photograph of your own that you’d like to be considered for feature in Crit My Pic, read the submission rules at the bottom of the page and email us your photo!

The point of view in ‘New York’ is relatively conventional, and it seems to have been shot from around head height. I get the impression of distance and detachment in this photo, and I wonder if Norah used a lens above 50mm, or perhaps cropped in post. It feels like this photo was perhaps shot from a pavement as Norah saw the scene, and as all the figures in the shot are either sitting or lying down, our point of view appears higher and we seem to be looking down on them. Ideally I’d like our point of view to be more ‘immediate’, by which I mean closer to the subjects, and also closer to their level possibly. I think this would give ‘New York’ more impact.

‘New York’ is a complex, nuanced photo, and one with many layers. As such, there is lots going on that can form the focal point of the photo. For me, I would say that the focal point of this shot is the two women facing one another lying on the grass. There are several reasons for this. One is that they are the largest figures in the frame, which naturally draws the eye. Another is that combined they almost form a line all the way across the horizontal of the photo, which is also eye catching. It also roughly occupies the first line, as I’ll discuss later. And finally, because of the figures’ size and position, there faces are those in the shot that we can see the most of. As I’ve mentioned in previous Crit My Pics, our eyes are naturally drawn to faces as that is our primary means of communication, so it stands to reason they play a stronger role as a focal point too. All that being said, I feel there is too much going in ‘New York’ that harms the two women as the main focal point. My main concern – i.e. the most distracting element of the shot – is the benches that appear in front of and below the women. It is entirely possible that Norah composed with them in mind – they form a nice parallel line under the women after all – however, they are far too dominant I think. Their strong geometric lines and visual weight dominate the lower portion of the frame and steal focus from the women. A potential solution would be to compose differently, cutting more of the benches out of the frame, or alternatively changing the point of view so that the benches were seen more ‘head on’ and thus less of the tops of them was visible. This would have allowed Norah to use their geometry to her advantage, without them being such a heavy distracting visual mass.

I’ve mentioned already the clever way in which the women lying down form a horizontal line across the lower portion of the frame around the first ‘third’ of the rule of thirds grid. In combination with the benches this means that the first third of the frame is entirely occupied, which is nice, though this effect would be more powerful and pronounced if the rest of the frame was more empty. The women’s heads (a natural focal point as discussed earlier) also end around half way up the frame, which keeps the composition neat. The leading lines of the railings and pavement ‘boardwalk’ in the top third of the frame are good, though I feel that in this case they over complicate things slightly. How fantastic would it be if they ran more parallel to the benches and the women laying down? As it is, the main ‘lines’ in ‘New York’ are pulling us in lots of different directions, which is a tad overwhelming.

In terms of the multiple figures in the photo, I really like what Norah has done with the layers here. We’ve got two pairs of couples on the grass in different poses, and one man sitting on the bench in the background. The result is lots of human interest across several levels. There’s an extra little detail I like too, and that’s the cut off feet! The woman lying down on the left is missing a foot, and then a mysterious foot appears above her higher up in the frame. And the woman lying on the right is missing her legs, with a pair of legs appearing out of the right side of the frame just above her. This is a fun little compositional trick that shows a great attention to detail and really lightens the mood of the photo. It’s also an effect that may have been lost if shooting from a different angle, which perhaps explains Norah’s point of view.

The exposure in ‘New York’ is very regular and the lighting relatively flat – this is not a photo that is focussed on dramatic lighting effects. The colours are all fairly muted, with the exception of the shock of red from the woman’s t-shirt in the top right of the frame. There are several different grey hues in the shot which are all harmonious with one another, and similarly with the grey/blue of the sea in the background. The green grass around the centre portion of the frame harmoniously ties in with everything too, though the blonde hair of the two women lying down does help them to stand out a bit. Overall, the hues in ‘New York’ are all very harmonious without being distracting or overdramatic. In an ideal world we’d perhaps have a more exciting colour in there somewhere, but that isn’t always possible!

The subject matter in ‘New York’ is very obvious, and one that we see regularly featured in street photos – it’s people relaxing in public! Norah’s use of multiple layers helps nicely with her subject matter here, as we see a group of people relaxing in similar yet different ways – lying, sitting on the grass, and sitting on a bench. And there’s two couples, plus a lonesome figure too. And each ‘group’ is doing something different as well. This adds a level of social interest to the photo too. While we’re not witnessing anything overly exciting or dramatic happening, this is a perfectly viable subject matter for a street photograph, and I like the subtle differences between each figure in the photo. With a slightly different approach in other aspects of the photo, this could become very interesting I think.

We are obviously seeing people at rest in this shot, and it has a very ‘static’ feel. The mood is calm and relaxed, and has the ‘feel’ of a snapshot too. As I mentioned in my comments about composition though, I really like the humour that Norah has injected into ‘New York’ with the compositional trick with the disappearing and appearing legs and feet. It adds a funny element of surreal into an otherwise very normal scene, and is something that is really great to see in street photos. 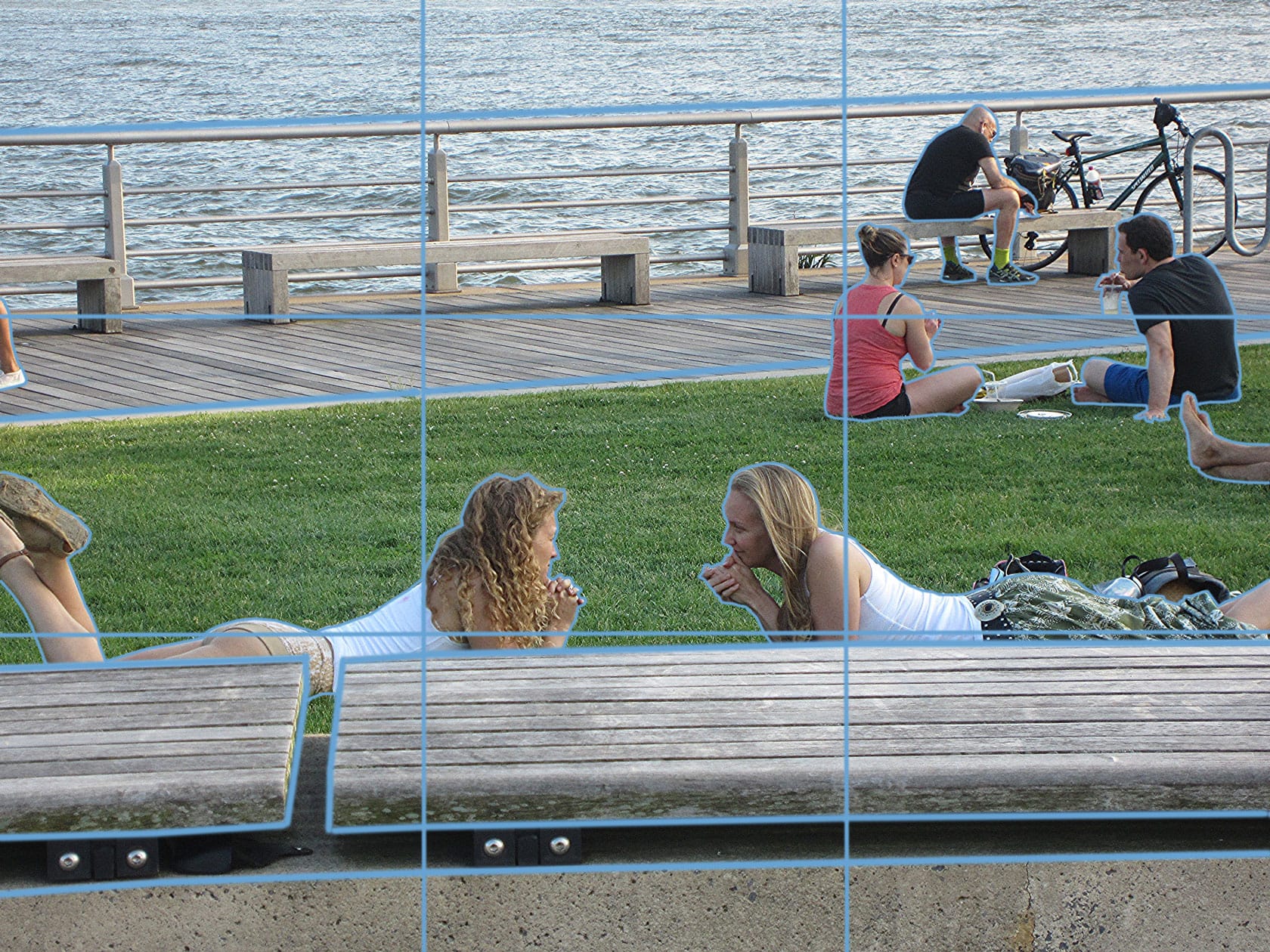 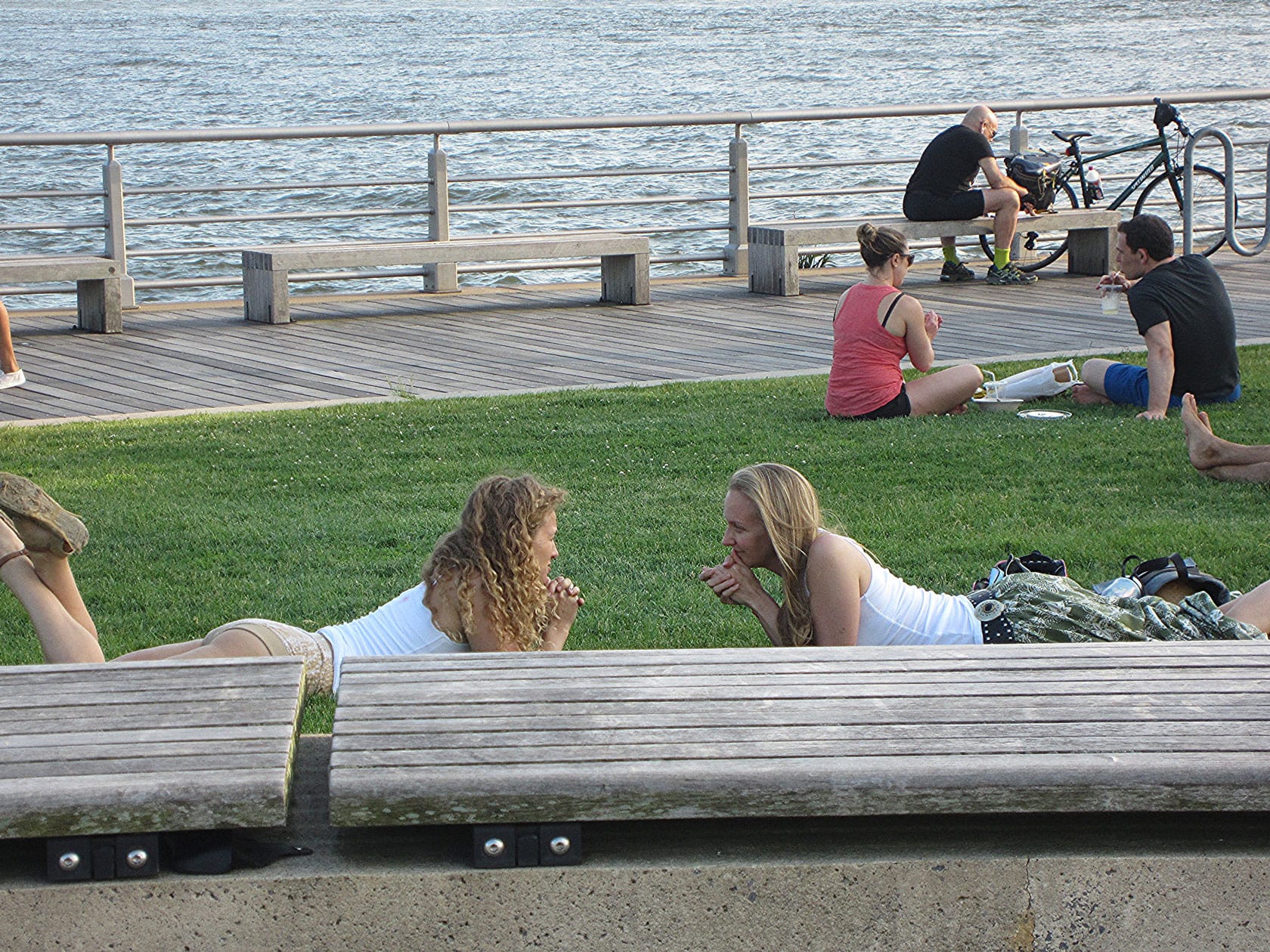 Overall, I think that ‘New York’ suffers a little as a result of the point of view, focal point and partly from composition. The challenges and distractions from the focal point really hamper the photo’s initial impact. The busy elements of the shot, and the confusion of the lines also detract from it’s immediate aesthetic appeal too. These factors conspire to make ‘New York’ a photo that doesn’t force the viewer to stop and pay attention straight away. This is a real pity, because actually on further closer inspection ‘New York’ has something to offer the viewer, particularly with the clever combination of layers. There is detail here, and humour and the surreal with the feet and legs, that rewards closer inspection. I think Norah should continue looking out for these things in her photos, but should seek to focus a little more on the aesthetic, and most of all, seeking out and defining that killer ‘punch’ that grabs attention. Not many street photographers are able to play with layers and hidden elements so well, so if she teams this with more powerful focal points she’s really going to stand out from the crowd and produce some exciting photos!