For Crit My Pic this week we’re going to be analysing a street photograph called ‘Look’ which was submitted by Alexey Kuzmis. The photo analysis criteria are the same as always, but if you’re new to this feature, or need reminding, they are: point of view, focal point, composition, exposure, subject matter, and mood. I’ll be making suggestions along the way for any potential improvements to the photo. For the chance to have a street photograph you’ve shot featured in Crit My Pic, read our submissions rules at the bottom of this page and then send us an email with your photo. And now, on to the analysis of ‘Look’.

When I first looked (excuse the pun) at this street photo I was impressed by the point of view. I like how ‘Look’ is shot from around the same height as the photo’s main focal point (the woman). We’re relatively close to her, and just slightly above, and this gives the ‘Look’ immediacy and power I feel. I’m a strong believer in the Robert Capa maxim of “If you’re photos aren’t good enough, you’re not close enough”, so it’s great to see Alexey get close to his subject here. We’ve got some more interesting things going on with the point of view here too in terms of the levels of the pavement in the background, but I’ll discuss more about that when we look at composition. Suffice to say, this is an interesting and effective point of view, and we’re off to a good start!

Our focal point in ‘Look’ is clear and well emphasised – it’s the woman in the glasses! We’re close to her, and she occupies almost half of the frame. Alexey has sited her well compositionally (more on that later), and she is very much in the foreground of the photo. However, to my eyes at least, her effectiveness as a focal point is somewhat diminished by the railings behind her. The reason for this is twofold. The first is that the railings present a very strong and heavy black mass across the width of the frame that dominate the photo a little. This wouldn’t be a huge problem in itself, were it not for the second factor – the woman isn’t quite in pin sharp focus. I don’t know which focusing technique Alexey was using, but it’s easy to see how he hit a problem with focus – either his autofocus locked on to the lines of the railings (AF likes contrast) or he was using the zone focusing technique and had his distance set a little too far away for his subject to be in his focal plane. Either way, it’s an easy issue to remedy in the future, but one which does ever so slightly weaken the strength of the focal point in this instance.

There’s some nice composition in ‘Look’. With our ‘rule of thirds’ grid overlay we can see how Alexey has placed the woman off to the right of the frame, unbalancing the photo and creating a pleasing area of negative space to the left that leads our eyes into the frame. Look (again, apologies!) at how the leading horizontal lines of the railings frame and brick wall in the background drag our eyes all the way across the photo from left to right, and towards the woman as the focal point – excellent! With a rough golden ratio point added, we can see how Alexey has placed the woman’s right eye close to this area which helps the composition – as I’ve mentioned before, we are naturally drawn to people’s eyes in a photograph as this is how we communicate. So the fact we are inclined to linger on a portion of the frame that fits the golden ratio is good. I also like how the heavy frame of her glasses ‘frames’ her eyes, drawing more attention to them, and likewise her scowling eyebrows. The cigarette lolling from her mouth also creates a nice line pointing diagonally left down the frame, which is mirrored parallel by the line of her upper arm.

With regards to the background, I have mixed feelings about its effect on the composition. The railings as I’ve already mentioned do steal focus a bit (literally perhaps!), but that could be easily corrected. I like the legs of the figures in the left hand background of the frame, as they add a nice counterweight to the woman in the foreground, and the effect of their different height creates a really interesting layer effect which gives ‘Look’ a nice depth. However, I find the figure walking just behind the woman is very distracting indeed. The relatively broad depth of field, and focus issue with the woman in the foreground means that this walking figure really steals attention away from our focal point. There are two solutions to overcome this. The first (and simplest) would be to have waited for this figure to walk past – though I appreciate perhaps this would have meant losing the woman’s expression. The second would be to use a larger aperture to create a shallower depth of field, thus drawing focus away from the background and towards the woman in the foreground again. However, a shallow depth of field would also hide the elements in the background which I’ve mentioned are effective, and remove that nice element of layers from ‘Look’.

The exposure in ‘Look’ isn’t particularly dramatic. The lighting is relatively flat, and there’s nothing to make it particularly punchy or full of contrast. That’s no real criticism, as the lighting is perfectly functional for our needs in the photo, and doesn’t detract at all from our scene. In an ideal world we could perhaps have some stronger light illuminating the main subject’s face a bit better – perhaps even from a nicely balanced fill flash. But that would be picking holes a bit. I like Alexey’s processing here – he’s kept things natural looking without too much in the way of the clarity, punch or contrast sliders. All in all, the exposure takes a back seat to other elements in ‘Look’. That does leave things a little ‘flat’, but it’s a very small complaint.

Given our strong focal point, our subject matter in ‘Look’ is very well defined. It is of course the scowling lady in the foreground with the cigarette. She’s an interesting looking character with ‘attitude’, and one who wouldn’t look out of place in a Bruce Gilden street photograph. As I’ve said already, it was nice to see Alexey get close to his subject, and his proximity really strengthens the subject matter of the ‘Look’. The fact the woman so clearly dominates the frame makes the photo all about her, and her ‘look’, and that’s exactly the way it should be here. This is classic street photography, capturing an unusual moment of an interesting subject.

Our subject matter informs the mood of ‘Look’. There is a nice dichotomy between the woman in the foreground and the figures in the background. The fact she is scowling with her cigarette clamped between her teeth in that way raises a nice set of questions in my mind. Does her expression have anything to do with the people in the background? Or is she just having a bad day? She has a rucksack on her back, so is she perhaps a visitor or tourist to this city? What’s her story? It’s nice when a photo raises more questions than it answers, and that’s certainly the case here. 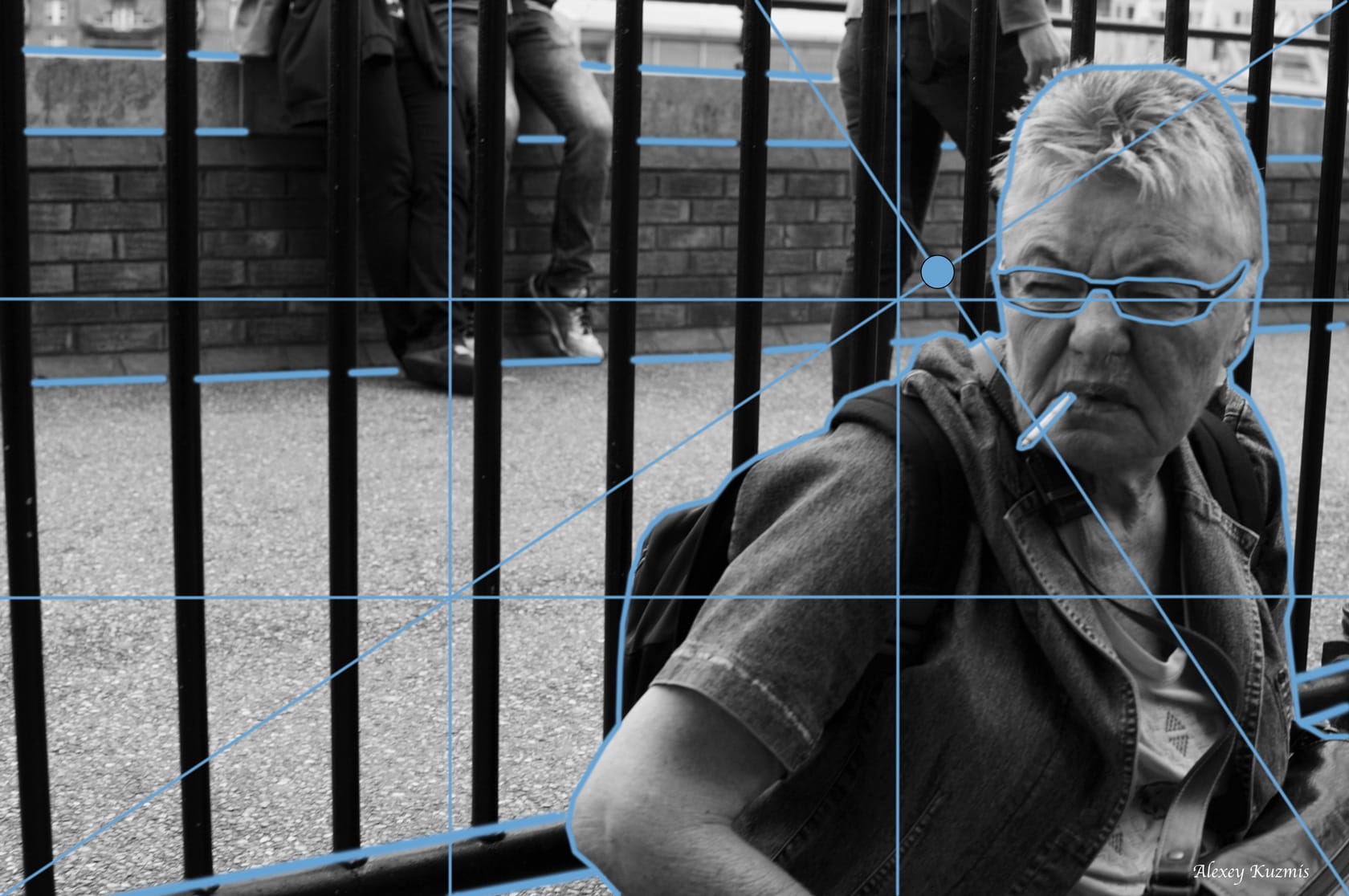 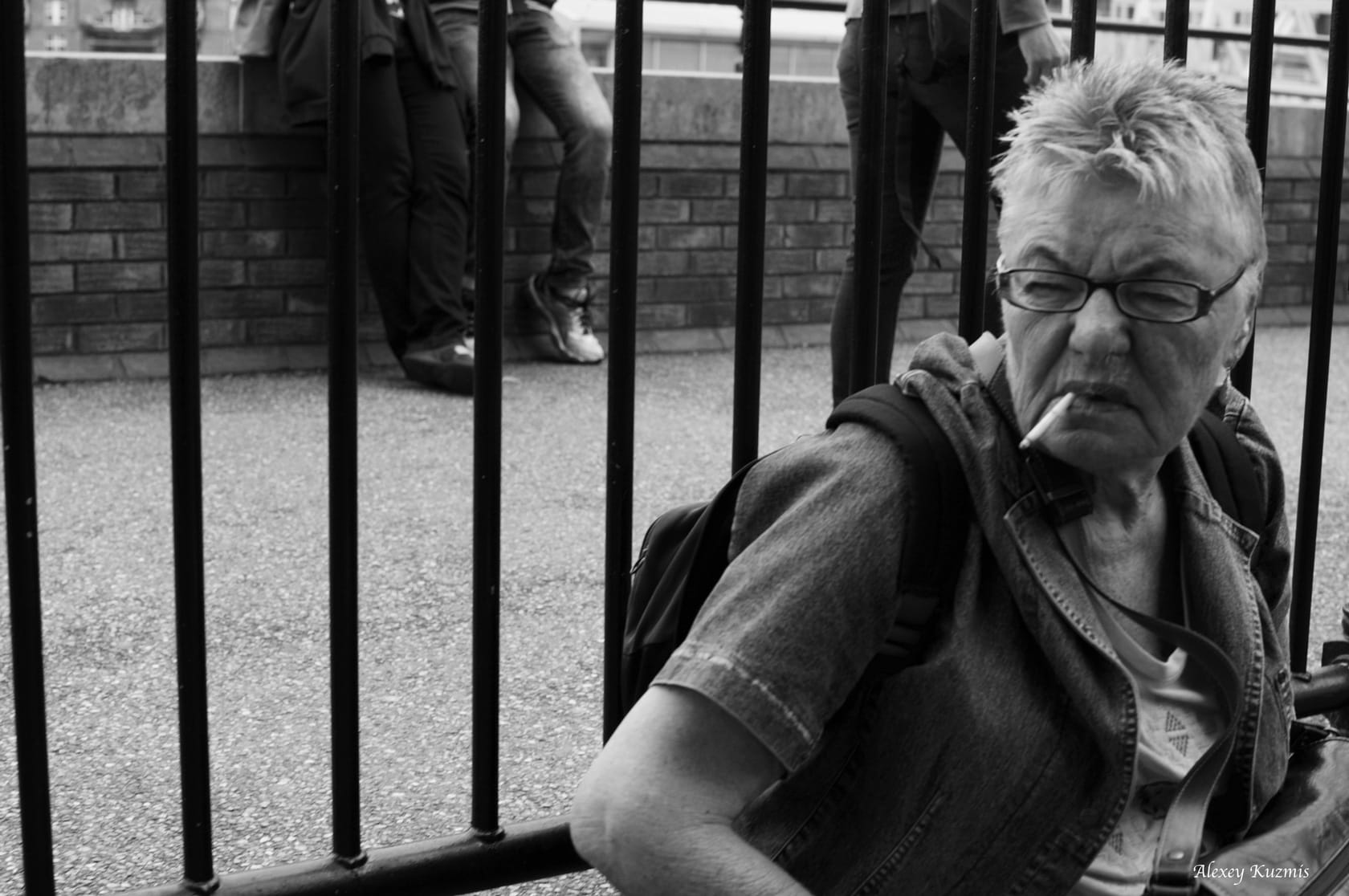 I was pleased with Alexey’s work with ‘Look’. He has a clearly defined focal point, subject matter and mood. With the figures in the background he’s beginning to show some nice interplay with layers too. As I’ve said, there are improvements to be made, mainly with the distracting figure directly behind the main subject, and the focus being on the subject instead of the railings. I feel that we need just a little more drama in this shot too to give it some punch – it’s currently missing a certain ‘je ne sais quoi’ to make it unforgettable. These are small points though, and the main take-home message from ‘Look’ is one of praise. It’s fantastic to see Alexey picking a strong subject, and most of all getting in close and making a shot! If he can combine this approach with the work he’s begun on layers in ‘Look’ his photos will only go from strength to strength.