Columbia, on the other hand, boasts a population of just over 100,000. Does that equate to more opportunities, more subject matter, for a street photographer? Perhaps. But if you narrow your shooting area to just one block, it should be a veritable “hot zone” for street. Familiarity with the turf won’t do. Intimacy is required. 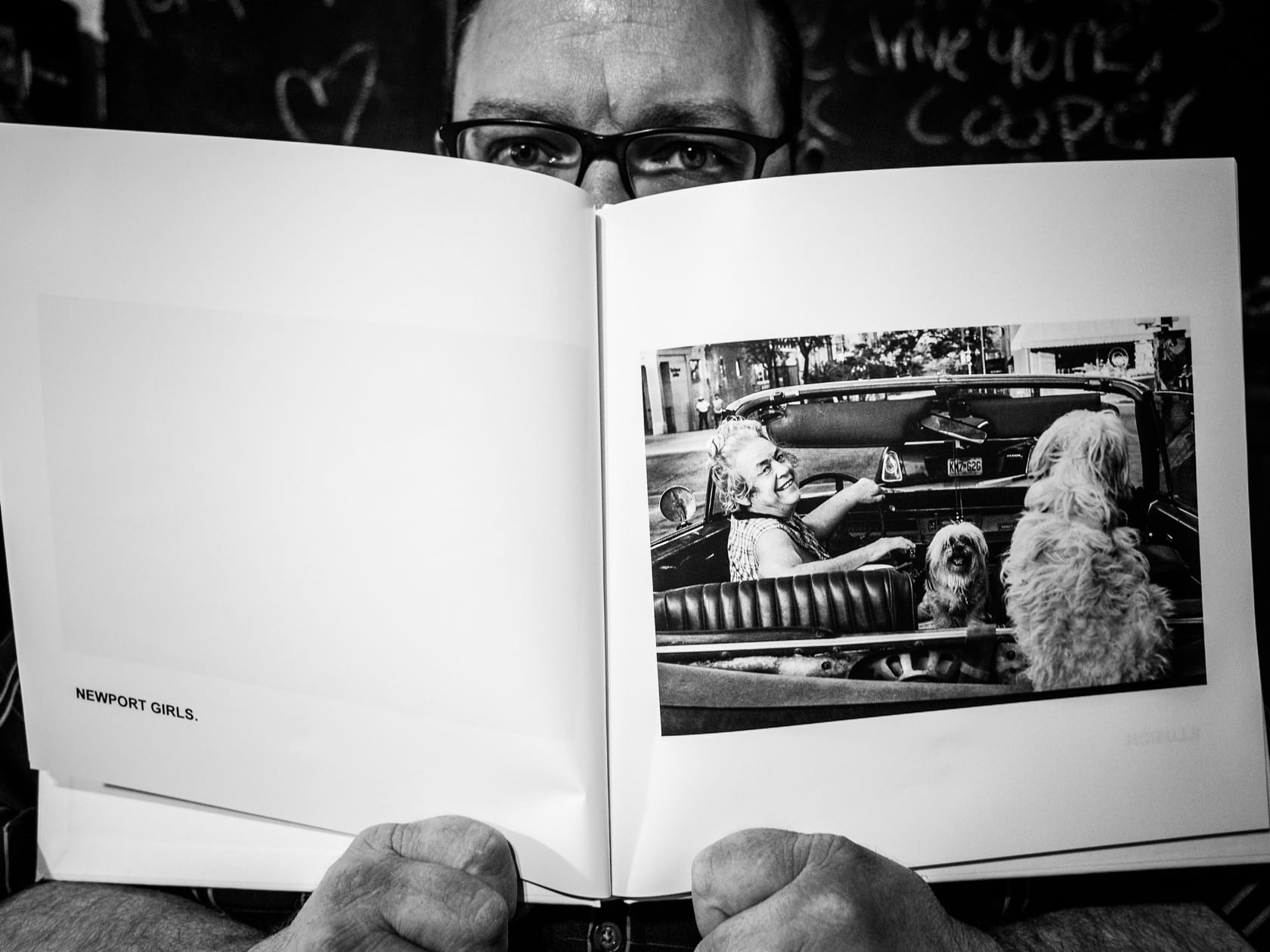 ‘One Block’, from photographer and Columbia resident Jon Luvelli, is a book that gives us an unflinching view of such intimacy. The intimacy of the relationship between the photographer and this small slice of Midwestern America. The publication is a culmination of three years worth of shooting just one block of Ninth Street in the Missouri city that Luvelli refers to as his “home base”, and it was released in conjunction with a gallery exhibition. Luvelli has most recently had three images permanently installed in the Walters-Boone Historical Museum and he’s done commissioned work for Universal, Warner Brothers and Nike.

Luvelli first came onto my radar last year, when his photograph, “Horns”, was featured as a Streethunters Street Photo Of The Week. Since then , I’ve been following him via his Facebook and Instagram accounts and anxiously awaiting the release of ‘One Block’. The “Fine Art Documentarian”, as Luvelli accurately describes himself, does not disappoint. 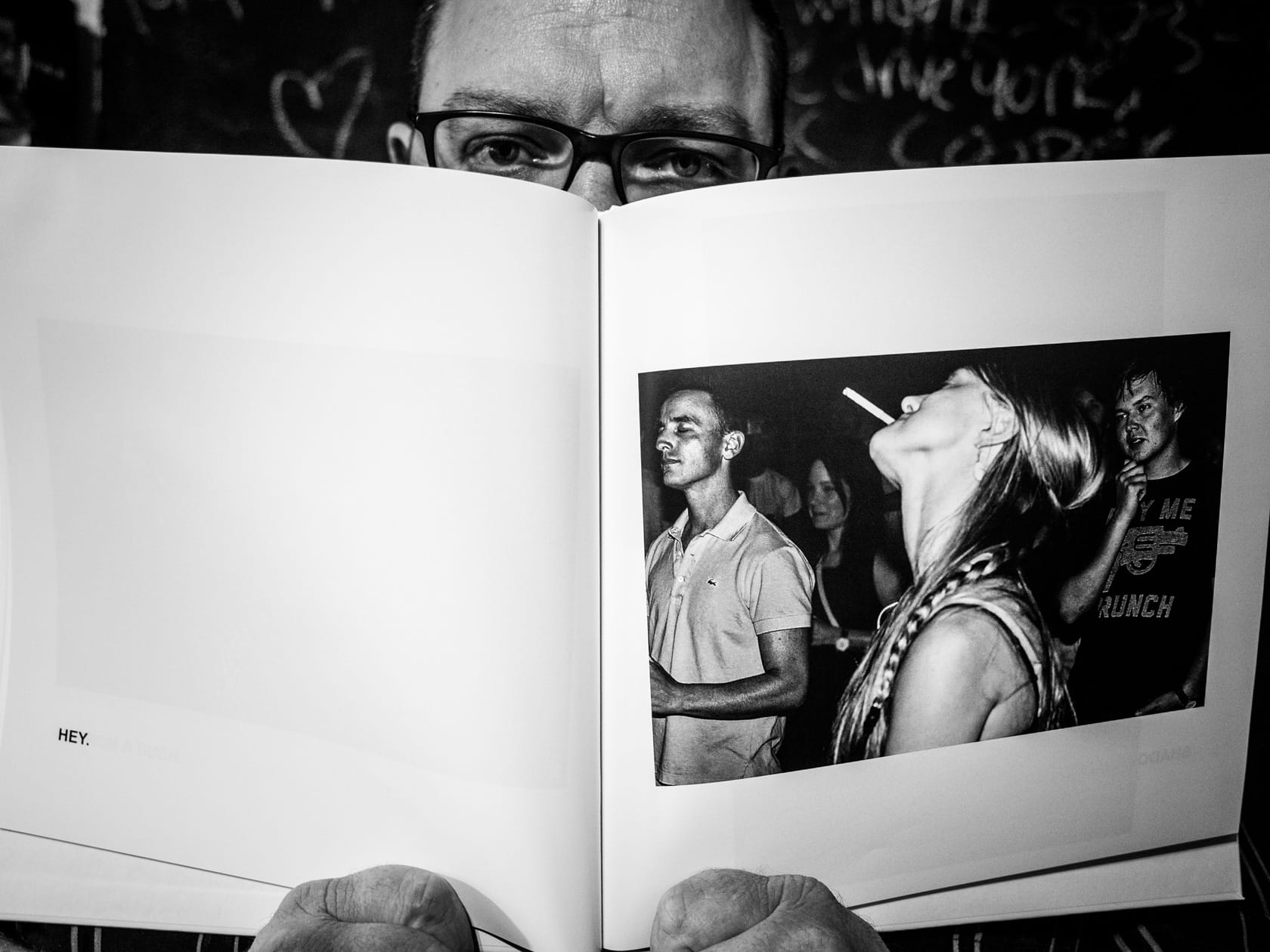 Straddling the line between art and street photography is tricky business, as the balance can be tilted too heavily towards the artistic. The street feel fades and any raw edges get smoothed out. Luvelli, thankfully, straddles the line deftly. And, in several instances, walks the line like a high-wire act. And to my delight, he does it in glorious monochrome, harnessing its stark and stately power with detail. His use of it gives a nod to a nostalgic feel, but it’s anything but a throwback.

The standard edition of ‘One Block’, available for $59 USD on Amazon, uses the power of black and white from start to finish. The white cover, features one of my favorite images, “Frost”, sandwiched between bold black type. It is simple, but very effective. With the book being 10″ (25.4cm) square, it resembles a record album cover. The strong image and font are compelling against the white background,  beckoning me to open it. It is quickly evident that the book’s interior follows the tone set by the cover. There’s no flowery introduction. The images are going to do the talking. And talk they do. 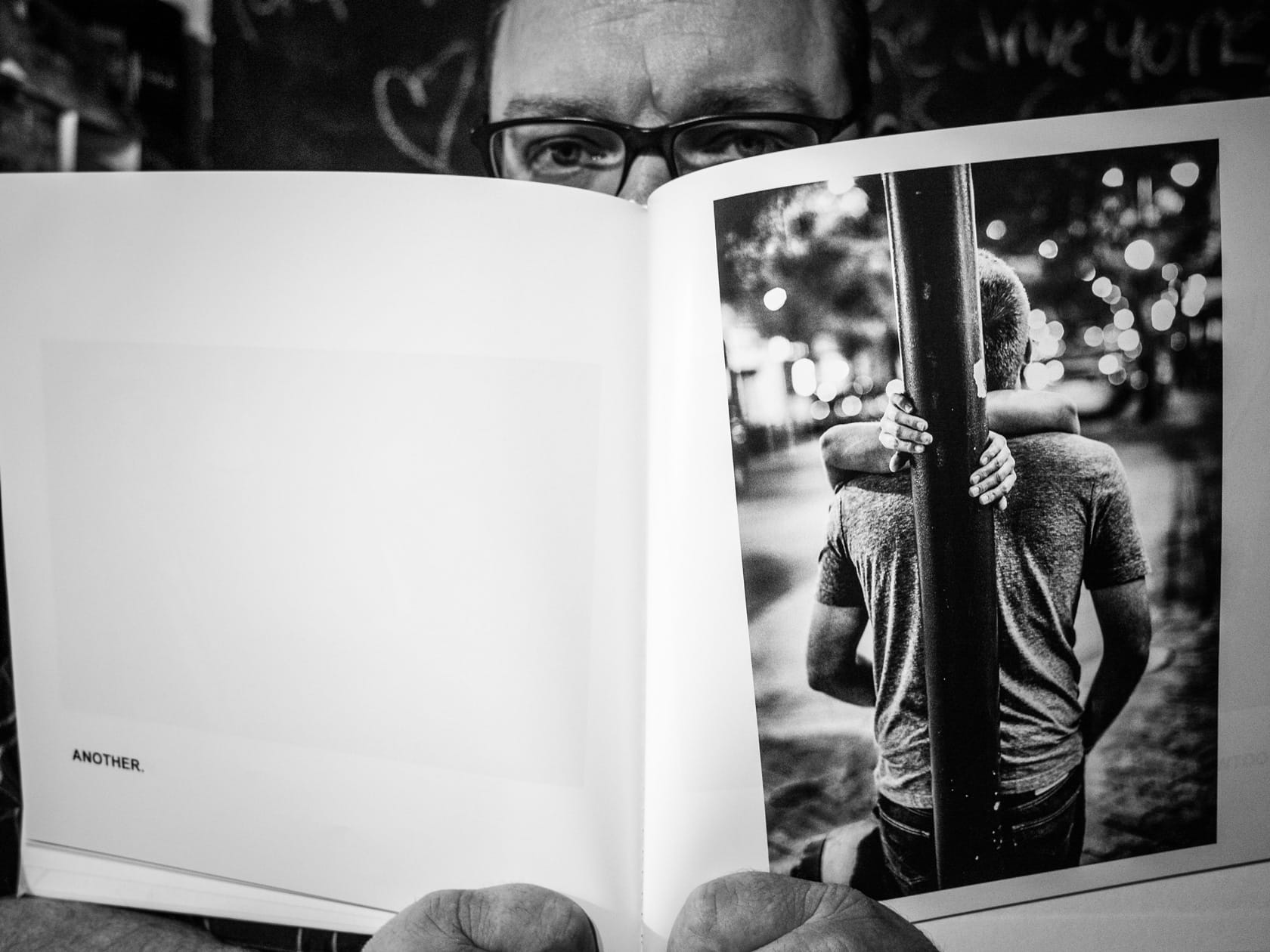 ‘One Block’ gives us 41 images on its 96 pages. Each picture, positioned on the right side of the book, is opposed by a white page on the left with the picture’s title in smaller block font towards the bottom of the page. This layout just works. Again, it’s straightforward, just like the cover, and again it serves this book well. In a sense, its uniformity and workman-like approach drives the viewer to the image, the repetition of the layout and the the use of all monochrome providing a rhythm that doesn’t prove tiring to the eyes at all.

But what does Luvelli deliver with his photographs? Simply put, he delivers that block of Ninth Street to us. The documentarian in Luvelli has the blend of old eyes and new. Whether intentional or not, the old eyes Luvelli has somewhat harkens to the feel of the work done by the Farm Security Administration photographers. The new eyes embracing street photography and the limitless opportunities the genre affords. 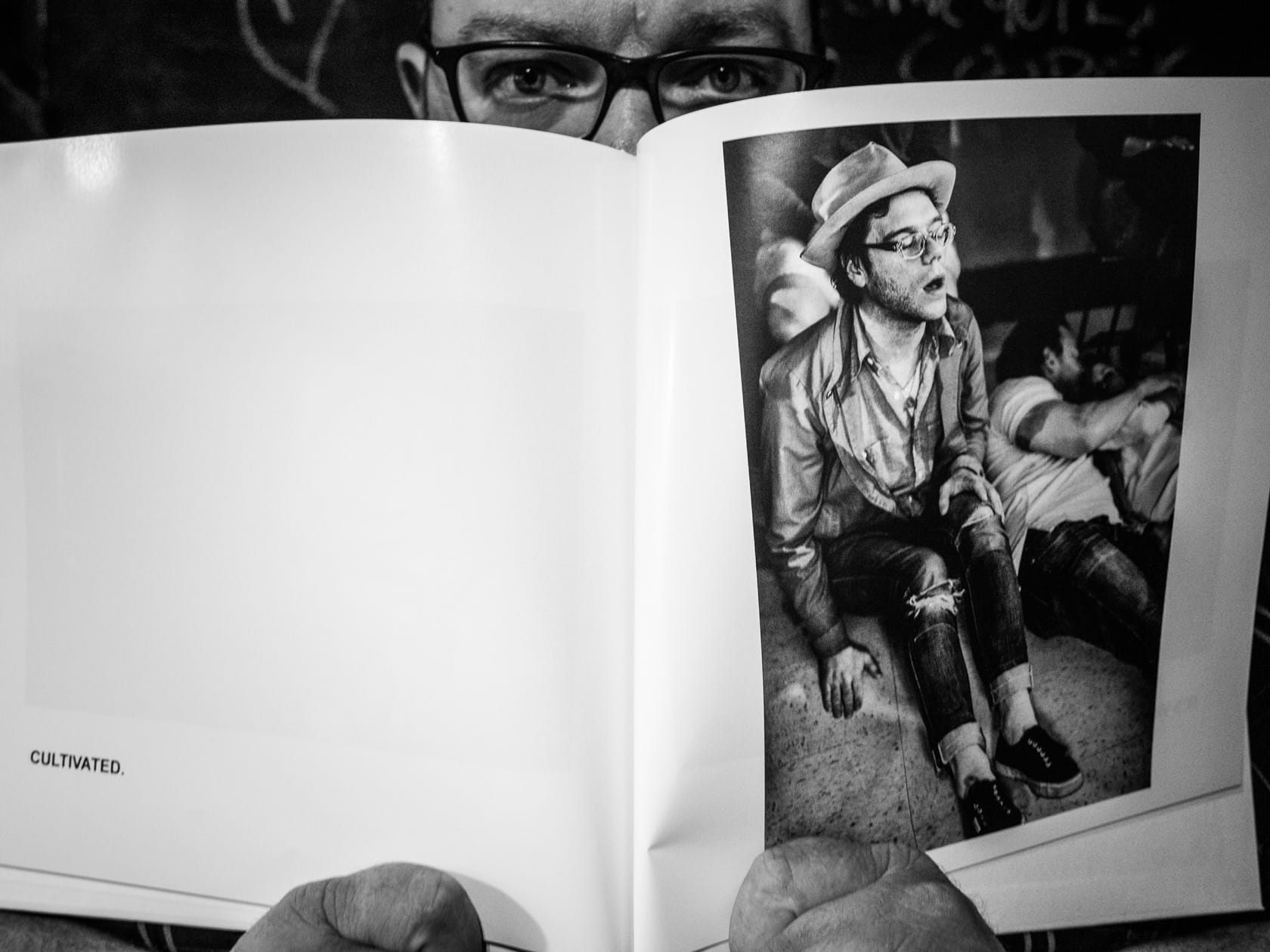 There’s points in ‘One Block’ where Luvelli appears to give nods to the masters, but never once does he cop a style. “Newport Girls”, a particularly endearing capture with a smiling older woman and her dogs in an equally older vehicle, brings to mind Vivian Maier’s or Garry Winogrand’s more lighthearted work. “It’s What We Do”, a high-contrast night shot with flash, captures a close-up of a man in voodoo-priest make-up that is both eerie and intimidating. The starkness brings Daido Moriyama to mind, but Luvelli goes for the grim detail instead of grainy blur. There’s even notes of the great Weegee floating about. After a few sittings with ‘One Block’, it has become evident to me that Luvelli is indeed a creature of the night. He is truly at his best when the sun goes down. He works the flash and sharpness with great skill. He’s no slouch on the daylight, though, and he knows how to use shadows, reflections, bokeh and blur without being overbearing. And he knows how to compose a photograph.

The self-taught Luvelli is obviously passionate about his craft. There’s a wealth of emotions and an abundance of raw street life within in this relatively small volume. In fact, that’s my only grumble about ‘One Block’… it’s too short. It left me really wanting more. But this is forgivable, considering Luvelli is relatively new to the scene. If anything, it’s a gamble for a photographer to release a small volume at a relatively expensive price point. But, if your work is solid, like Luvelli’s is, it’s a smart play. It will whet the appetite for more of his images, which is what happened with me.

‘One Block’ is a winner, and worth your attention. Just a few images shout that they may be his early work and not as strong as the majority of them. But overall, this book brings it, If anything, it can be seen as a ground-floor investment into Luvelli, the photographer, a shooter whose stock is on the rise. And from what I’ve seen of his work since the book’s release, there’s very healthy growth potential. 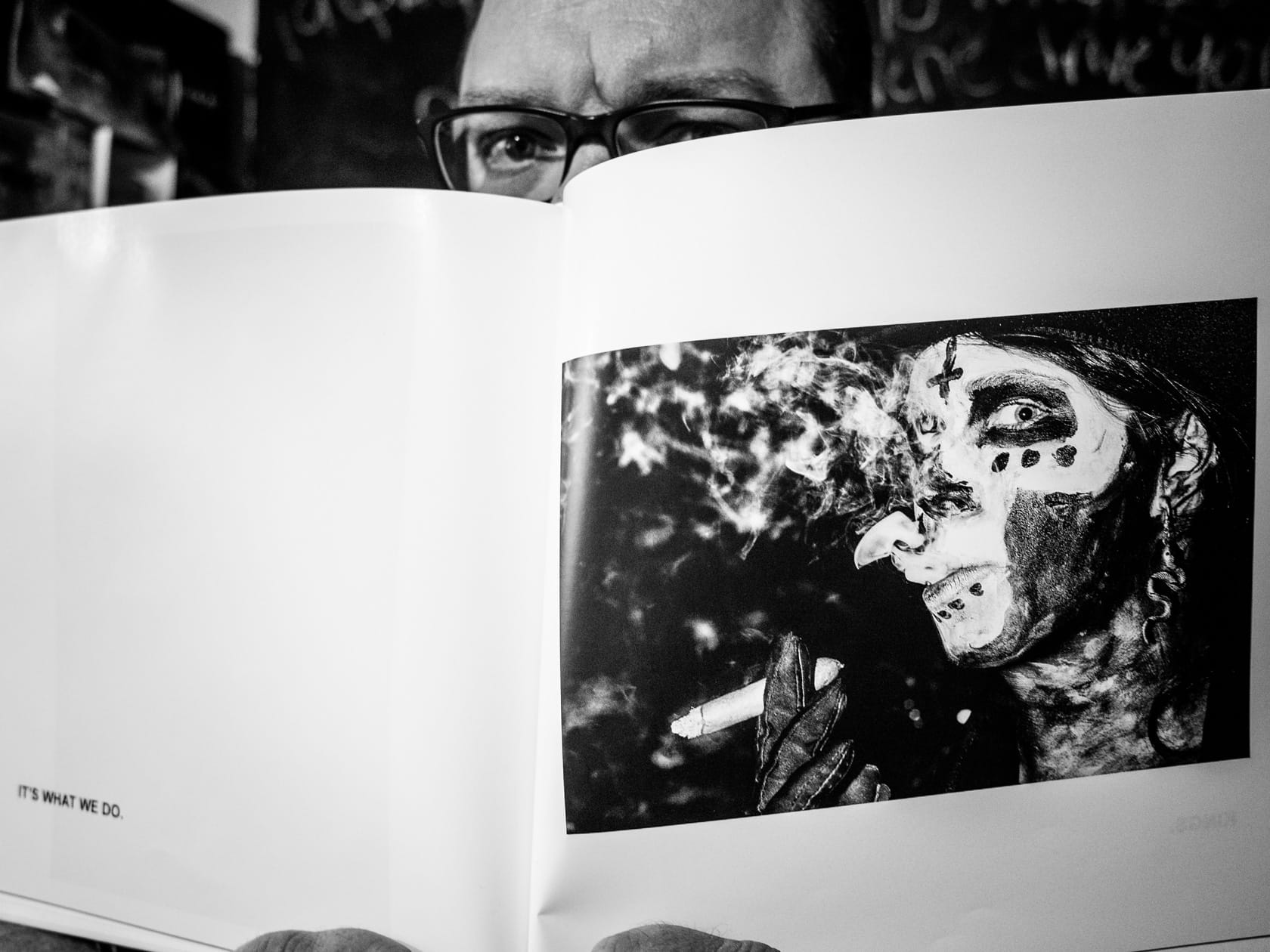 A collector’s edition and more information is available at : http://www.jonluvelli.com
https://www.facebook.com/JONLUVELLI