It’s time for another Crit My Pic feature, and this week we’re going to be looking at a street photo submitted by Stuart Liddle, titled ‘Near the Lamp Post’. Stuart is one of the longest lasting readers of Streethunters.net, and was actually the first person to have his camera bag featured in ‘What’s in your Camera Bag?’ way back in 2014! He also took part in the first official Streethunters.net Reader’s Exhibition in Athens. Thanks for sticking with us for all this time Stuart, I hope you find this crit useful! Those familiar with Crit My Pic will know the formula by now, but for those new to the game, I will be analysing Stuart’s photo in terms of point of view, focal point, composition, exposure, subject matter, and mood. I’ll make suggestions where I can for ways in which I think the photo can be improved. To have your own street photograph analysed for Crit My Pic in the future, read through the submission rules at the bottom of page and then drop us an email. Without further ado, let’s begin the analysis of ‘Near the Lamp Post’!

I was delighted when I first looked at ‘Near the Lamp Post’ to see such an interesting point of view. It’s a refreshing departure from the ‘norm’ (which I practice overly frequently myself) of shooting street photos from standard head height. There’s nothing wrong with this approach per se, but a change of perspective can lend an interesting twist to things, and that’s certainly the case here. Stuart’s high-level quasi- bird’s-eye view serves to really emphasise the geometry present in the photo, which is something I’ll talk about in further detail later. Another advantage of this high level viewpoint is that it shows us to see more the street itself, and place it in context with our subject, whilst at the same time allowing Stuart to show the interplay between his subject and the street.

Despite being very impressed with the point of view in ‘Near the Lamp Post’, I feel the focal point perhaps needed some more development to make for a stronger street photo. Our attention is seized by the skeletal shape of the lamp post looming out of the first third of the frame, and its presence does dominate the shot a bit. The lamp post leads nicely to the person standing beneath it, who of course should be the main focal point in this shot, but they are overwhelmed by the lamp post I feel. Stuart did incredibly well to link the elements together in the way he did, but the focal point just isn’t quite as strongly defined as I’d like. That said of course, his point of view and composition are both so ambitious that finding flaws does seem a bit nit-picky – and makes the task of suggesting improvements harder still! Perhaps if the person’s distance from the lamp post were increased they might stand out more as a focal point, and not be so much in the shadow of the lamp post.

Stuart demonstrates a very skilled understanding of composition in ‘Near the Lamp Post’. If we consult our ‘rule of thirds’ grid we can see the lamp post as the dominant structure in the shot is placed around the first third of the frame, with the bulbs at the top of the lamp post positioned off centre, and around the golden ratio point, disrupting the photo’s balance in a good way. However, it’s the awareness of and use of geometry that is most impressive here. Stuart has used his overhead view to his full advantage, showing us the fascinating interplay of geometric lines that make up the pavement. I really like the interplay between the parallel and perpendicular lines, and the different weights and thicknesses – with the fine lines of the bricks and the thicker lines of the concrete walkways. The rows of parallel lines in the top right of the frame are a nice foil for the lamp post and bins in the diagonally opposite the other corner of the frame.

Stuart manages to go a step further with his composition though, and uses shadows to further emphasise his focus on geometry. Note for instance how the photo has its own shadow frame of negative space across the top and right two thirds of the frame. This creates a nice border and focuses our attention toward the left hand side of the photo where the ‘action’ is. The best detail of the composition though is the triangle in which the person is located, formed by the lamp post, the shadow of the lamp post, and the lines of the pavement. It’s a nice container for our subject and shows how meticulously Stuart planned the shot. In terms of suggestions for improvement, my only recommendations for improvement to the composition return back to my suggestions about the focal point – and that would be having the person further away from the lamp post.

I like the use of exposure in ‘Near the Lamp Post’. There’s a lovely mix of tones between the pavement pathways, bricks, lamp post bulbs, and the person. Best of all though, are the lovely rich blacks for the shadows, which Stuart has kept very deep without leaving us with a photo with contrast dialled up to 11 or overly processed or sharpened. As is my wont, I’d like to know a bit about the colours in this shot too, and at least know that Stuart considered them when he made the shot. It looks like the hues in the person’s top could be quite similar to those of the bricks, but on the off chance they weren’t, it could potentially be that colour would have lessened some of the issues we have with the person’s proximity to the lamp post, as they may have stood out more against it. This is a rather tenuous suggestion though, and Stuart has clearly executed his monochrome exposure and processing well.

There doesn’t seem to be anything particularly complex going on with the subject matter in ‘Near the Lamp Post’, although that is not intended as a criticism. With this point of view it would be extremely challenging to come up with a subject matter that was anything other than a ‘person in a street’. With a more unusual street or perhaps some street art on the pavement it could have been surreal, but as I’ve mentioned in the composition analysis, geometry is the key driving force behind this photo, so our subject matter of ‘figure in the street’ fits perfectly with that. A lone figure in amongst the ‘sea’ of the mass of lines of the pavement is as good a subject matter as any!

The point of view, exposure and figure in ‘Near the Lamp Post’ all combine to create a sense of static detachment. The heavy geometric lines make the figure appear very small, and the neat composition adds to the sense that they are a single lonely figure alone in the street. The high level viewpoint adds a voyeuristic twist too, and we very much get the sense that we’re spying on the person and they are completely oblivious to our presence. I like the ant-like effect that is created here, and detachment is certainly a mood and theme that could make for a interesting series in a street photography project. 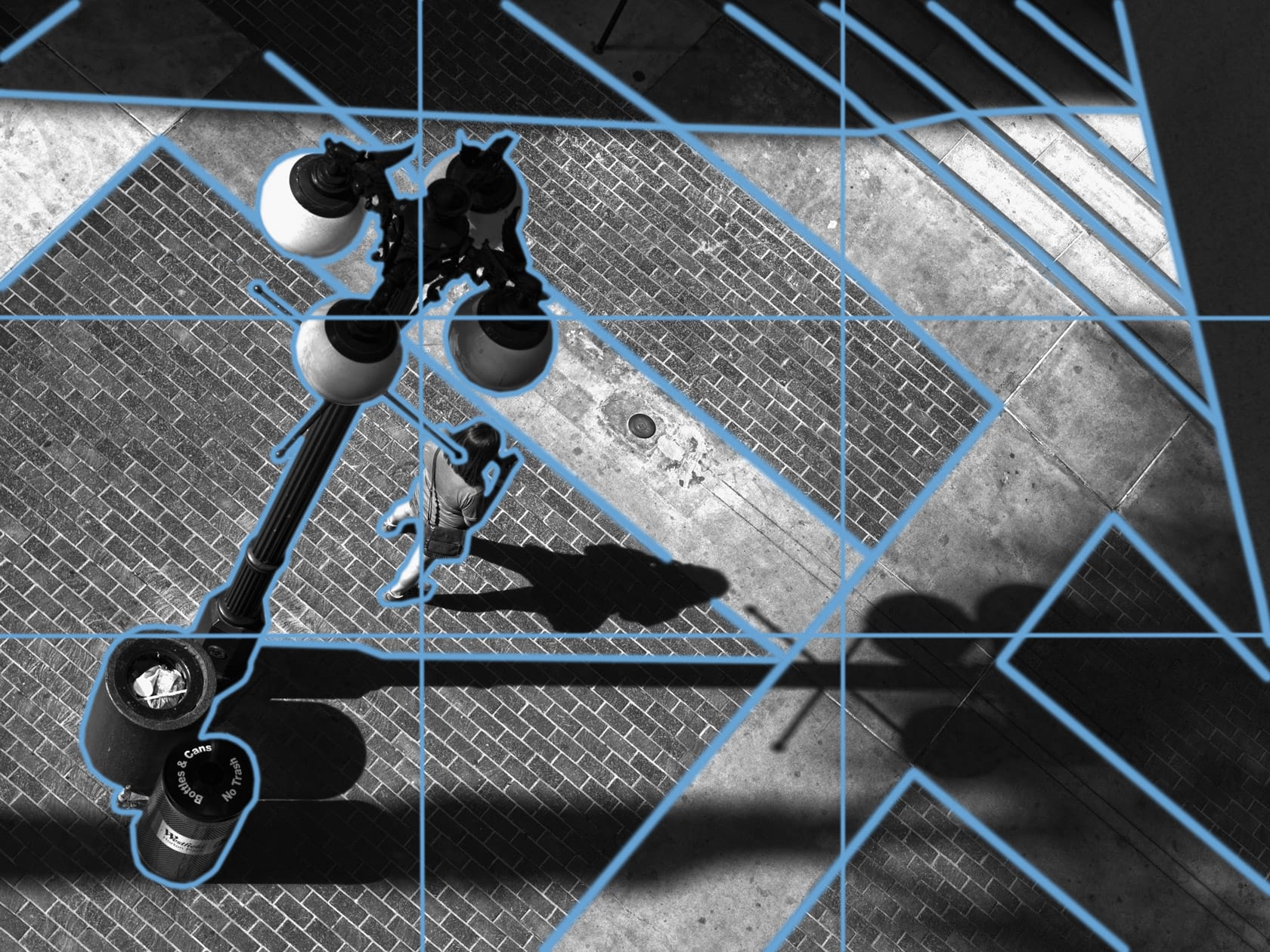 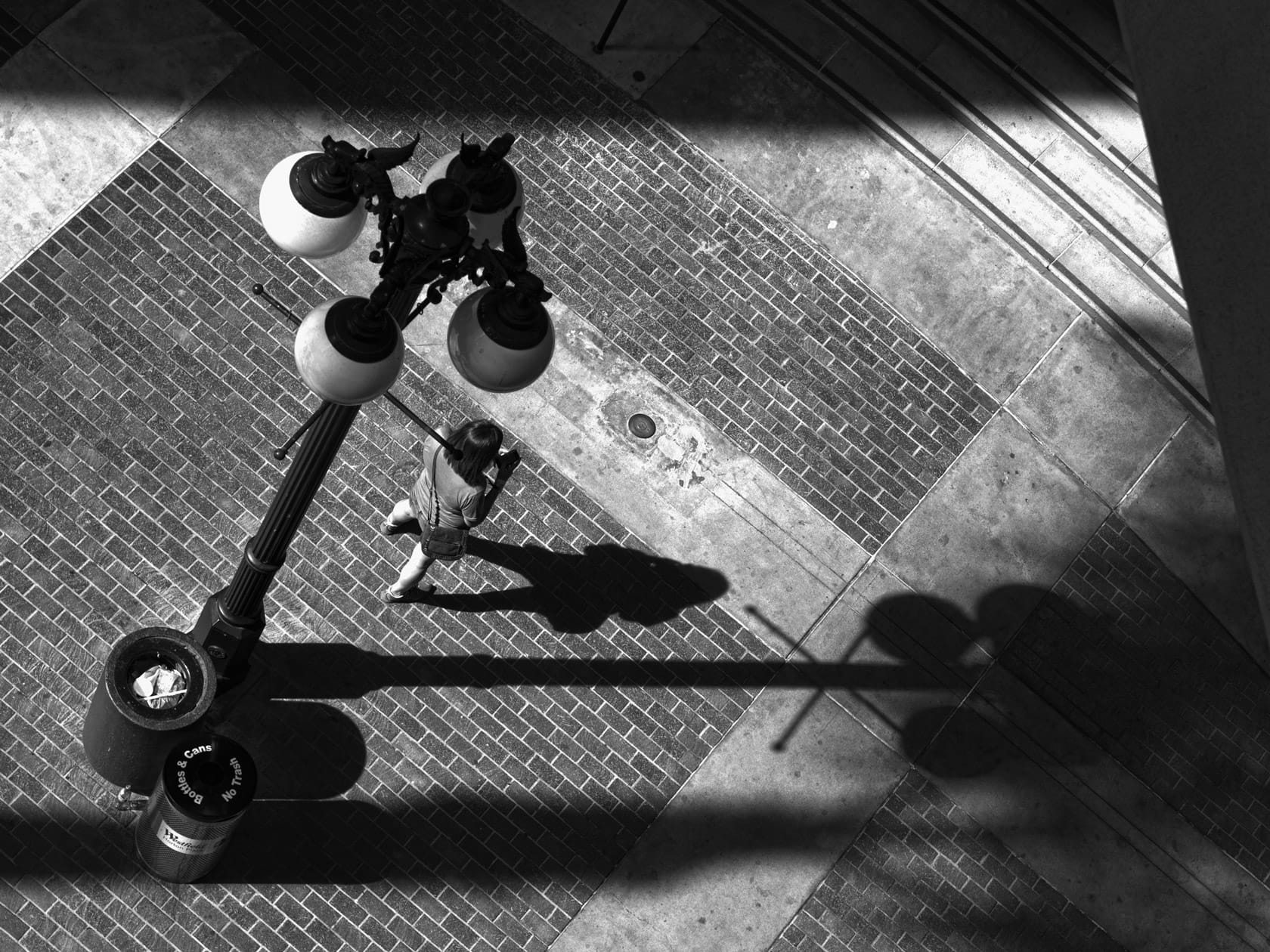 By far the strongest elements of ‘Near the Lamp Post’ are the fantastic point of view and the superb composition. They instantly make Stuart’s street photo stand out from the crowd, and it grabbed my attention instantly. As I highlighted, I feel that the main issue with ‘Near the Lamp Post’ is the lack of a very clear focal point, or to be more accurate – not enough emphasis on the person to hold our attention. They are merely a part of the photo and not a significant draw in it. This lack of a powerful human interest theme is what limits this photo for me. I can understand the arguments for the approach, but in my opinion a street photo needs to have a very powerful influence of a person in order to be truly arresting. I think if Stuart continued along this compositional and viewpoint path but with a greater focus on human interest we will surely see some very exciting work. His composition with geometry alone makes me really stand up and take notice. Well done and keep shooting Stuart, thanks for being a part of the Street Hunters community for so long! I’m looking forward to seeing more of your work!