After an unanticipated interlude, the Crit My Pic analysis of your submitted street photographs has returned. This week I’m going to be analysing a photo by Andy Curtis called ‘Singing in the Hail’. As usual, I’ll be looking at  Andy’s photo across the criteria of point of view, focal point, composition, exposure, subject matter, and mood, making any suggestions I can for ways in which it can be improved. If you want to have your own street photograph analysed for Crit My Pic, all you need to do is read through the submission rules below and then email us your photo! Now, let’s crack on with Andy’s shot…

I think the point of view we have for ‘Singing in the Hail’ is slightly lower than head height, and I get the impression Andy may have crouched down ever so slightly to get this shot. I’d describe it as a fairly orthodox point of view for a street photograph where the subject is sitting on the ground, and it doesn’t overly challenge our perception of the scene. It does serve to emphasise the leading lines well though, as I’ll discuss in further detail later. As far as suggestions go, I think I might like to see the point of view in this shot veering more towards the extremes. Either we could have a more low level view that still kept the leading lines, or a rat’s eye view, or an overhead view looming over the busker. Any of these would mix things up and bit and make the shot a bit more exciting, which I think is something that is missing a little here.

We’ve got an incredibly clear focal point in ‘Singing in the Hail’, and through his composition Andy has emphasised it a lot, as I’ll discuss further down. Our focal point is the busking musician (Andy was very clear that he was not homeless), a fairly common sight on the streets. What makes him more interesting in this instance is the fact he is performing in extreme weather, which does help to move us away from a shot that is too boring or cliched. The broad depth of field and monochrome choice for processing does make the busker blend into the background a bit though, and this does lessen his impact slightly as a focal point which is a pity. As I mentioned above, perhaps a different focal point or perspective would help to make him stand out a bit more.

Andy has followed a nicely geometric composition in ‘Singing in the Hail’. He’s placed his focal point right in the centre of the frame, and his horizon line just above the middle horizontal of the frame. For a shot like this, the emphasis on the geometry and symmetry works very well, and produces a nice effect. The key aspect for me that plays the most important part in the composition in this photo is the leading lines of the pavement. These lead up from the bottom of the frame and towards our ‘horizon’ line, in this case the bottom of the wall the musician is leaning against. The effect of perspective on these leading lines of the paving stones means that they appear to converge a little on the musician, and in doing so they actually draw our eyes into the frame and thus towards the focal point.

In terms of improving the composition, it’s difficult to come up with any particular changes or suggestions – Andy has done what he needs to here to focus our eyes. As I’ve mentioned earlier, I might like to see what a lower point of view would do for this shot, which would involve moving the horizon line but still keeping those leading lines to pull us into the frame. It would perhaps be interesting to further emphasise the ‘minimal’ style of composition in this shot, so we could perhaps try something a little wider and more simplistic too, though that would require us to lose the window as a background which isn’t really very practical!

Andy has shot in black and white here, and I like the nice mix of subtle grey tones that really fit with the miserable hailstorm we’re witnessing. It’s good that Andy didn’t fall into the trap of cranking up the clarity slider too much – in this case it would have really damaged the subtlety of the shot. The grey world that Andy shows us really helps lend the ‘Singing in the Hail’ a certain mood. The predominance of grey really makes this feel like a quintessentially British street scene. One potential negative aspect of the monochrome processing of ‘Singing in the Hail’ is the lack of isolation of our focal point from his background. As I’ve mentioned earlier, the broad depth of the field owing to the aperture and Andy’s distance from the subject means that the musician does blend in a little with the window display behind him, and this is not helped by the fact there are no different hues to help distinguish one from the other, so I do wonder if perhaps colour might have given a bit more sense of depth and help isolate our subject from his background more.

The subject matter in ‘Singing in the Hail’ is one of our ‘bread-and-butter’ street photography subjects – the street performer! It can be a somewhat cliched focus for a street photograph, but in this case it is made far more interesting by the presence of the inclement weather. The hailstorm adds another element of interest to the photo, helps to make the scene more immersive, and makes us feel more for the musician. By making us feel more for the musician’s plight, Andy has given the photo more humanity, and made it much more interesting and powerful to us. However, I would have liked to see him go further. Part of me wants to see more of the musician’s plight. I like that we can see the blurred flashes of hailstones across the frame, and I’d like to see the weather emphasised even more. Perhaps a lower shutter speed still? Or a lower point of view so we can see more of the sodden pavement and the hailstones bouncing off it? Another alternative would be for Andy to get in closer to the musician, so we can see more of his features.

I’ve already discussed the importance of the weather in this shot, and it plays a very significant role in the mood of the photo. The sodden hailstorm, the grey scene, and the plucky musician battling on against the elements – everything about this is archetypal British street scene! It’s nice to see a street photo capture the essence of a place so well. We have a nice juxtaposition here too, between the casually and practically dressed musician and the bright, elegant window display filled with feminine models wearing light summer clothes, so we have two worlds colliding here which adds a further element of interest and intrigue. In terms of mood, ‘Singing in the Hail’ has a nice mix, well done Andy! 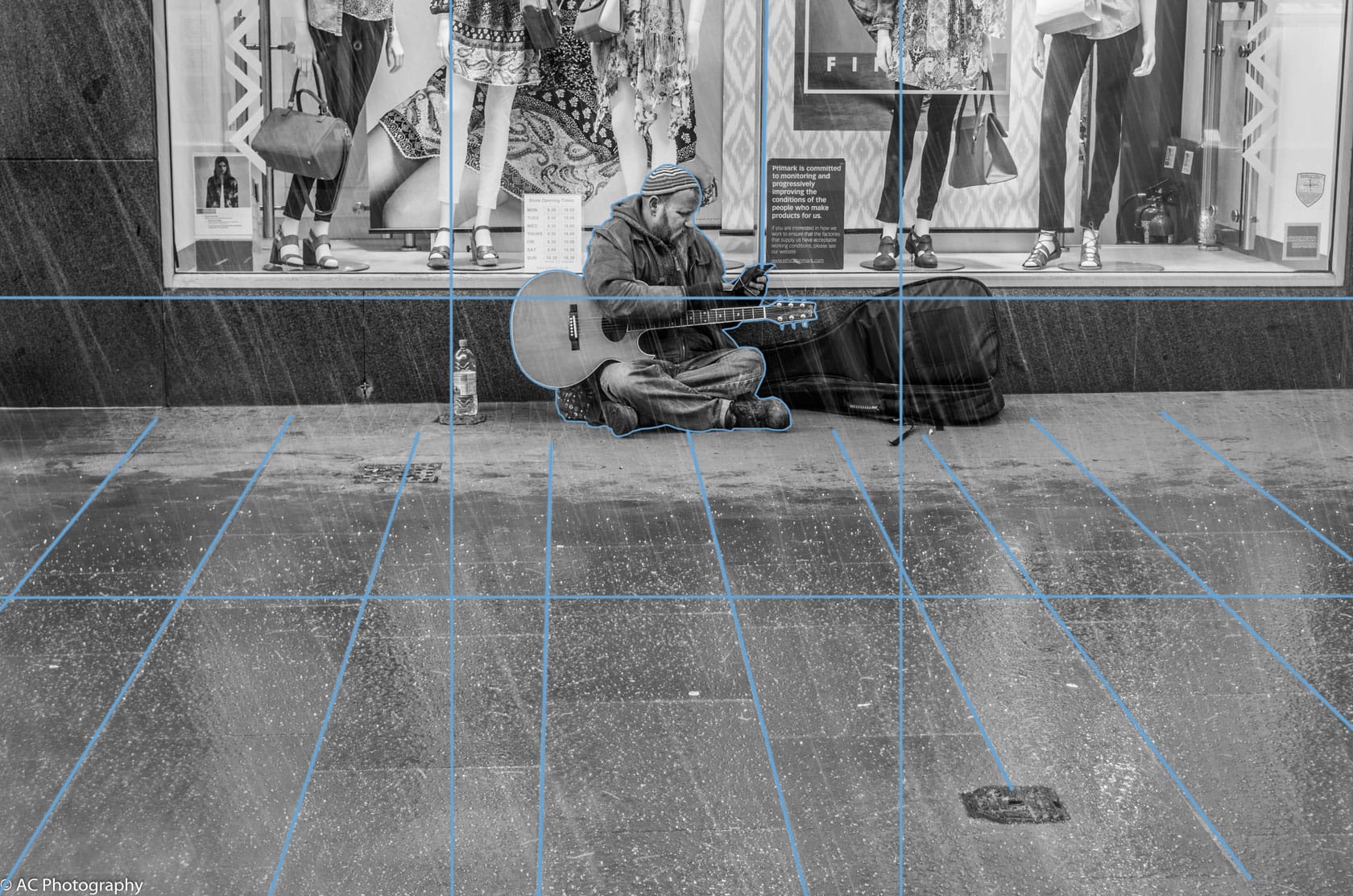 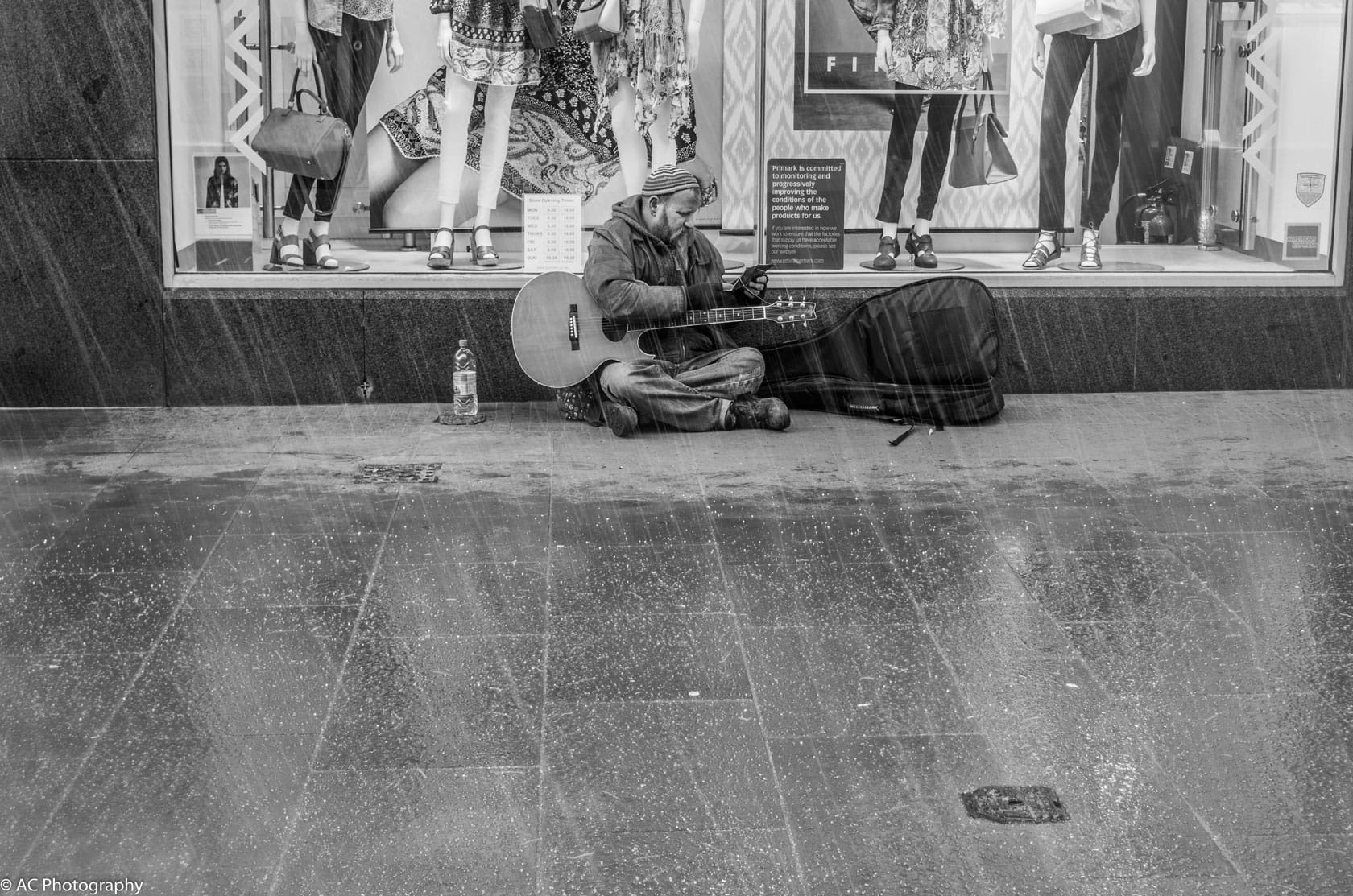 For me, ‘Singing in the Hail’ is a quite an evocative shot, and I like the mood and juxtaposition going here. Andy’s composition is good too, and I particularly like the way he’s used leading lines to focus our attention and draw us into the frame. My main suggestion and feedback for this photo concern ‘drama’. I think ‘Singing in the Hail’ needs something to elevate it and make it much more exciting and dramatic, and arresting to us as viewers. I think a different point of view could make it more powerful, and also serve to emphasise the extreme weather more. I’d like to see more simplification to the photo to give it a more minimal feel, and I think that a changed focal point could help here too. Andy has done well to spot an interesting scene, and I really like the mood he is conveying and the story he is telling. I feel that with a focus on adding more drama, and perhaps a bit more ‘artiness’ in terms of composition he can produce something that is more interesting and arresting as a whole.