Our Crit My Pic this week is ‘On The Tram, Gothenburg, Sweden 2015’, and it is a street photo shot by Linus Andersson. I will be analysing and making comments about how I think it performs in the criteria of point of view, focal point, composition, exposure, subject matter and mood. Where I can, I’m going to be making suggestions in these criteria for ways in which I think the photo can be improved. To have your own photo analysed for Crit My Pic you need to read the submission rules at the bottom of the page and then email your photo to us.

We have a lower point of view for this shot than we’d normally expect in a street photo and that’s a good thing. This very much has the feel of a hip level shot and that instantly makes the photo more interesting. The point of view in ‘On The Tram’ is below the eye level of the boy in the left hand side of the frame, and slightly higher than the two women we can see sitting. With all the various levels we have in this photo a hip level point of view is perfect because it sits just above the middle of all the eye lines and head heights. Fantastic! The lower point of view that Linus has chosen also greatly influences the focal point and composition (as I’ll discuss later) and also lends ‘On The Tram’ an immediacy and intimacy that often makes for a more effective street photo. We are not used to seeing arms and elbows ‘above’ our eye line, so this immediately makes the photo more immersive.

I feel ‘On The Tram’ is a bit challenged for a clear focal point, and that is to both its strength and disadvantage as a photo. Before I start talking about the focal point(s) in more depth I will acknowledge that this is a photo with lots and lots of elements which is what makes it so interesting as our eyes journey around the frame making new discoveries. However, in terms of focal point this can make things feel a bit busy at times. Focal point number one is the blonde boy in the left hand side of the frame looking directly at the camera. He holds our attention because he’s making eye contact and our brains are wired to react to this – it is how we communicate. However he is pushed off to the left of the frame a bit which does limit his impact. The second focal point is what pushes him out of our eye line, and that’s the man in the sunglasses who’s around the first third line of the frame. As the only figure who occupies the full height of the frame, he’s quite imposing and dominating, and his body forms a big negative space block in the shot. Grouped around the right of the frame we have a further two objects which all call for our attention, and these are the head of the man standing, and the woman sitting under the outstretched arm. The upshot is that there are lots of features in ‘On The Tram’ vying for our attention and this challenges any one feature aspiring to be the focal point. Linus attempted something very challenging with this shot, and it’s hard to say exactly how a single focal point could be emphasised more, though two options would be to bring the boy more into the centre of the frame, or crop the head off the man in the sunglasses.

As I’ve already mentioned, the rule of thirds overlay grid shows how Linus has placed the man in sunglasses on the first third vertical, which helps the figure to dominate the frame. As a big body mass, and the one we see close to full in the frame, I’ve noted how he becomes a big shape of negative space that dominates the composition a little. Moving to the right of the frame, we can see the pole of the tram falls around the second of the ‘rule of thirds’ verticals. The hand grasping the pole then appears in the golden ratio point which adds a nice balance to the composition. The whole right hand edge of the frame is occupied by abstract body parts, and these form the second big negative space shape that helps to balance out the figure of the man in the sunglasses. If you look closely to the right of the frame you can see there are actually three hands all grasping out of the side of the photo which adds a nice element of the surreal.

Another compositional element we have in this photo centres around people’s heads. If we start with the blonde boy making eye contact we then journey up to the man in the sunglasses, then over to the other man standing in the background, then to the woman whose head is framed by the trailing arm and over to the woman wearing the sunglasses in the centre of the frame. Linus has effectively created a triangle of heads to lead our eyes around the photo! This shows excellent composition, and allows us to discover new elements in a multi-layered photo. Well done Linus!

We have a nice balanced exposure in ‘On The Tram’. I like how the shadow tones on the skin on the arms is rendered, and the effect on the crisp sharp lines of the tram interior. Linus has opted for black and white for this shot, and monochrome places a nice emphasis on the dark tones in the photograph, particularly the boy’s jacket, the sunglasses wearing man’s dotted shirt, and the stripes on the shirt of the figure in the far right. I’d be interested to learn what the colours were in this scene though. I wonder what colour the boy’s eyes are? I thought perhaps he might be a more arresting focal point if the shot were in colour and his eyes were a blue-grey colour as I think they might be. I wonder also what other colours there were in this scene. Perhaps there were other elements that added even more to this photo in terms of depth and layers. It would certainly be something worth exploring, especially as colours can not only serve as a distinguishing aspect for a focal point, but also can be used for composition to link together other elements in the frame.

Our subject matter in ‘On The Tram’ is exactly what we’d expect from street photography. It’s the everyday. The seemingly mundane. But that is the crux of street photography and the ‘genius’ of it too, finding beauty and interest in ordinary everyday scenes. I like that Linus is showing us a crowded tram cart with a bunch of people of different ages, and that the photo has been shot in such a way that we really get a feel for the scene. Public transport can often be interesting in the way that it throws people together, so Linus has chosen well in picking this location.

We’ve got an interesting combination of moods happening in ‘On The Tram’. We have the archetypal street photography mood of voyeuristic detachment that is present in so many street photos, and is generated by the fact that we are passive onlookers to a scene. But one of the great things about ‘On The Tram’ is that the point of view changes the mood too. Because it’s a low viewpoint, the shot has an immediacy and intimacy that changes the mood of the photo. We still feel detached as passive observers but we feel more included in the scene too. We can feel ourselves part of it and that lends the whole photo an intenseness and immediacy which is so often lacking. It’s refreshing, and it’s great to see. The closeness of the shot also adds an element of the surreal too, both in terms of the perspective and also the cropped effect on the limbs in the photo. Great work Linus! 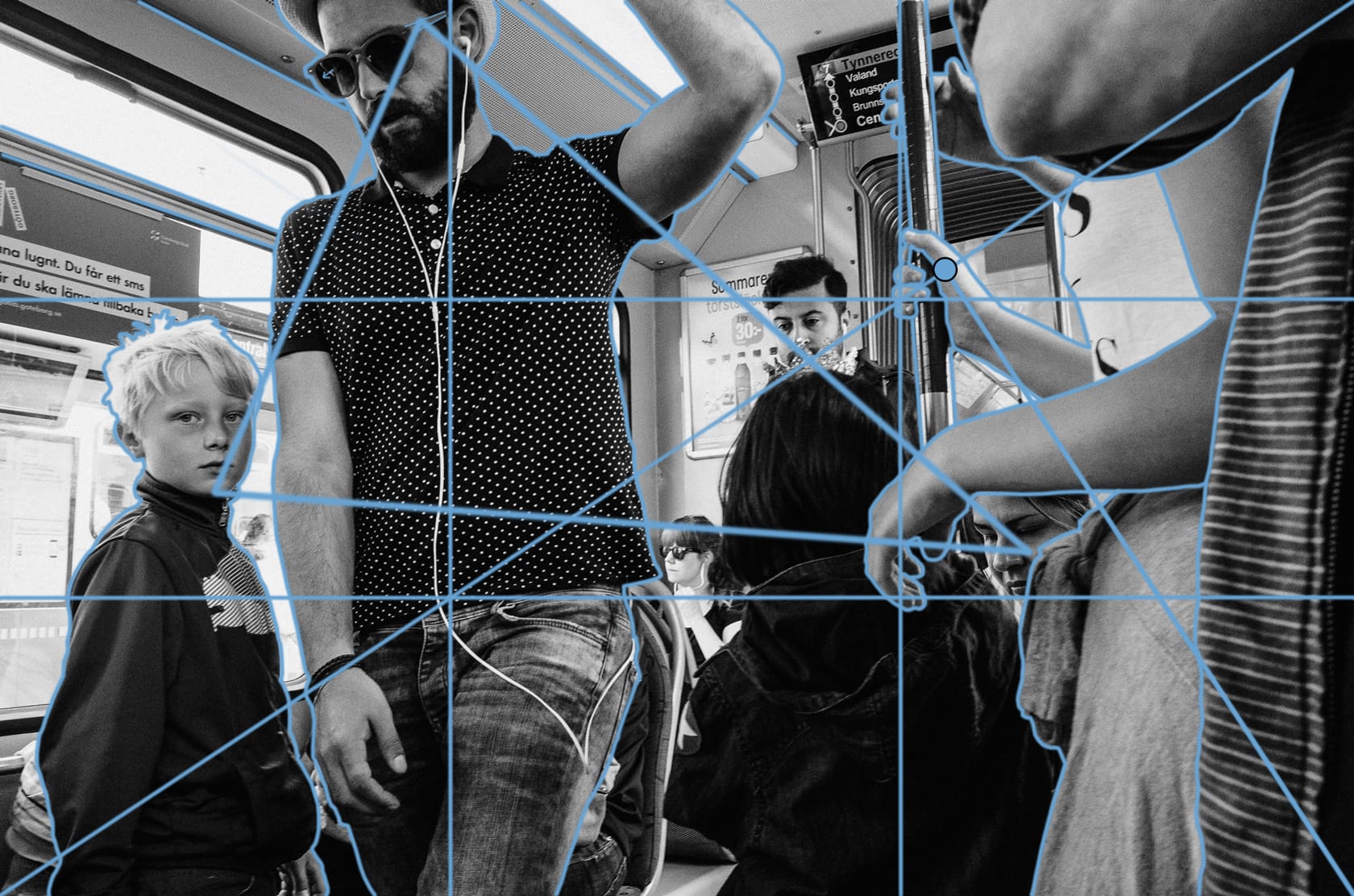 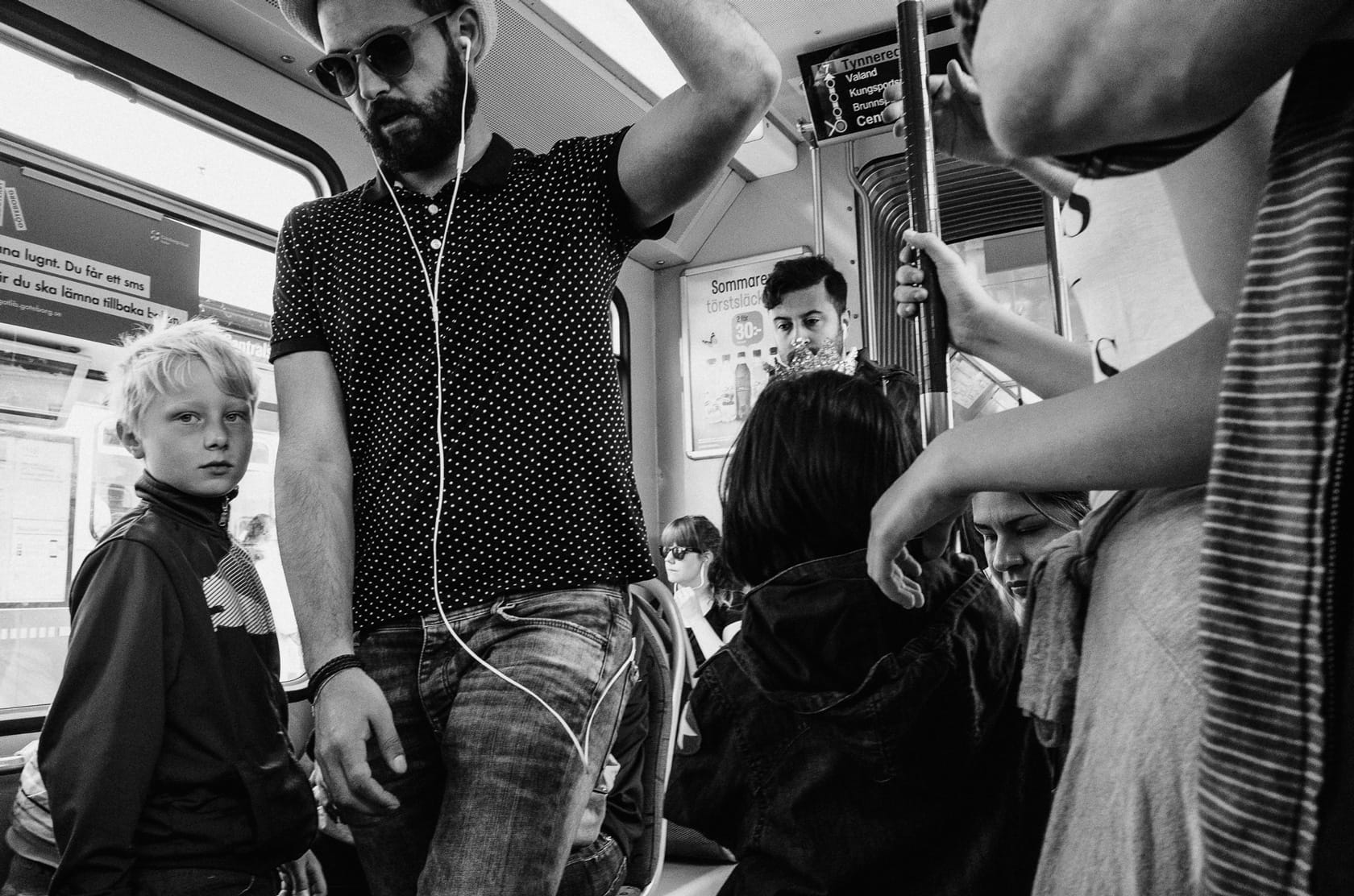 You’ve probably been able to tell that I like ‘On The Tram’. I think it’s a bold street photo, and it has that certain “je nai se quoi” that speaks to me. I think the point of view is really what makes the shot, and if Linus keeps to develop this approach and this immediacy then we’re going to see some really interesting work. ‘On The Tram’ reaps the rewards of shooting close – after all, “If your photographs aren’t good enough you’re not close enough”! I think with a little more development and focus on stronger focal points, which might be as simple as experimenting with a little colour work, we will see some very very strong work from Linus. Well done!