When editing written work, one of the more difficult tasks is to “kill” or “murder your darlings”. That phrase can be traced back to Arthur Quiller-Couch from his 1913-1914 Cambridge lectures, “On The Art of Writing”. What does the phrase mean? To myself, it means to basically trim away the fat. Eliminate the self-indulgent elements that don’t necessarily aid in furthering the work. Even though the fat is where the flavor is, excess of it isn’t a good thing. The writer Stephen King has said,

So, too, must the photographer kill their darlings when selecting images for a photo book, zine or exhibition. The more images in their library, the more brutal the process must be. When I look at work by prolific master Elliott Erwitt, I imagine the photos “left on the floor” are likely images I could only dream of making. After repeatedly devouring his massive collection, Personal Best (teNeues, 2014), I wonder if Erwitt had to kill any of his darlings. Or, if the man had ever taken a bad shot in his sixty-plus year career.

Before I go on, I must give a disclaimer. Elliott Erwitt (born 1928) has taken the top spot on my list of favorite photographers. Not that’s worth anything, but consider it an advance apology for my unabashed gushing over his work. 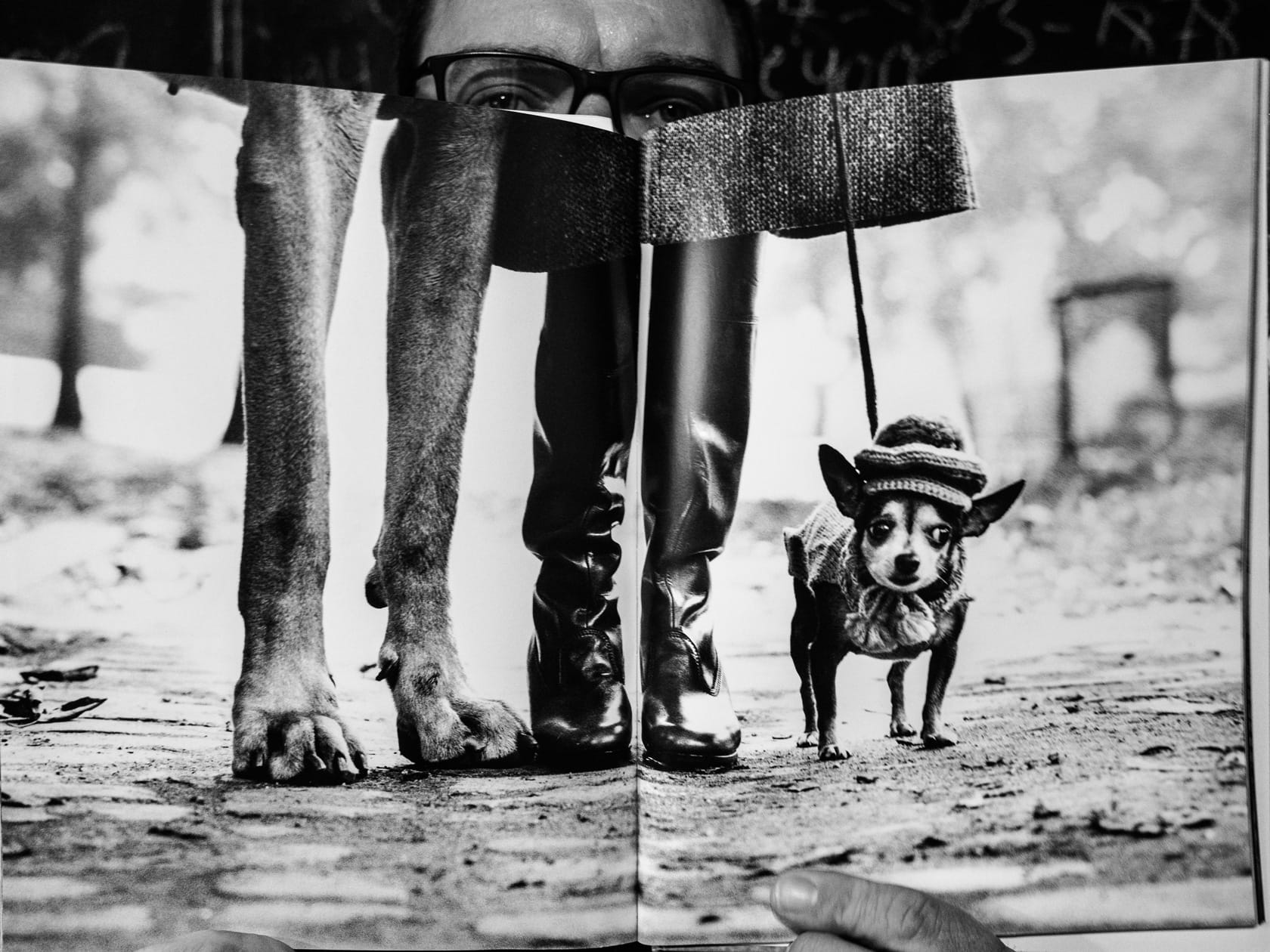 Who is Elliott Erwitt?

Erwitt is a living legend and it would be difficult to find someone with a valid argument against that status. In fact, I would wager that anyone with an interest in street photography, or photography in general, had seen his work. He’s not only produced some of the most clever and witty street photography the world has seen, he’s also given the world some of the most iconic images over the better part of a century.

Elliott Erwitt’s legendary career is heartily represented in the 448 pages of the hardbound Personal Best. And what a career the photographer has had. After moving to New York to become a professional photographer, he was drafted into the United States Army in 1951 and worked as a photographer while stationed in Germany and France. In New York, Erwitt met former Farm Security Administration head Roy Stryker, who had launched the careers of photographers like Walker Evans, Dorothea Lange and Gordon Parks. The archivist hired a young Erwitt to take on a project documenting the city of Pittsburgh. In 1953, Erwitt joined Magnum photos, and in 1968 he became President of the agency. He would serve three terms over the years. He worked as a freelance photographer and did work for Collier’s, Look and Life. He also became sought after as an advertising and commercial photographer, working for companies like Chase Manhattan Bank and Air France. He’s done journalistic essays. He’s been the set photographer on movie sets like The Misfits and On The Waterfront. He’s also been a filmmaker. But the Elliott Erwitt I like best is the street photographer, and that Erwitt is featured plenty in Personal Best. 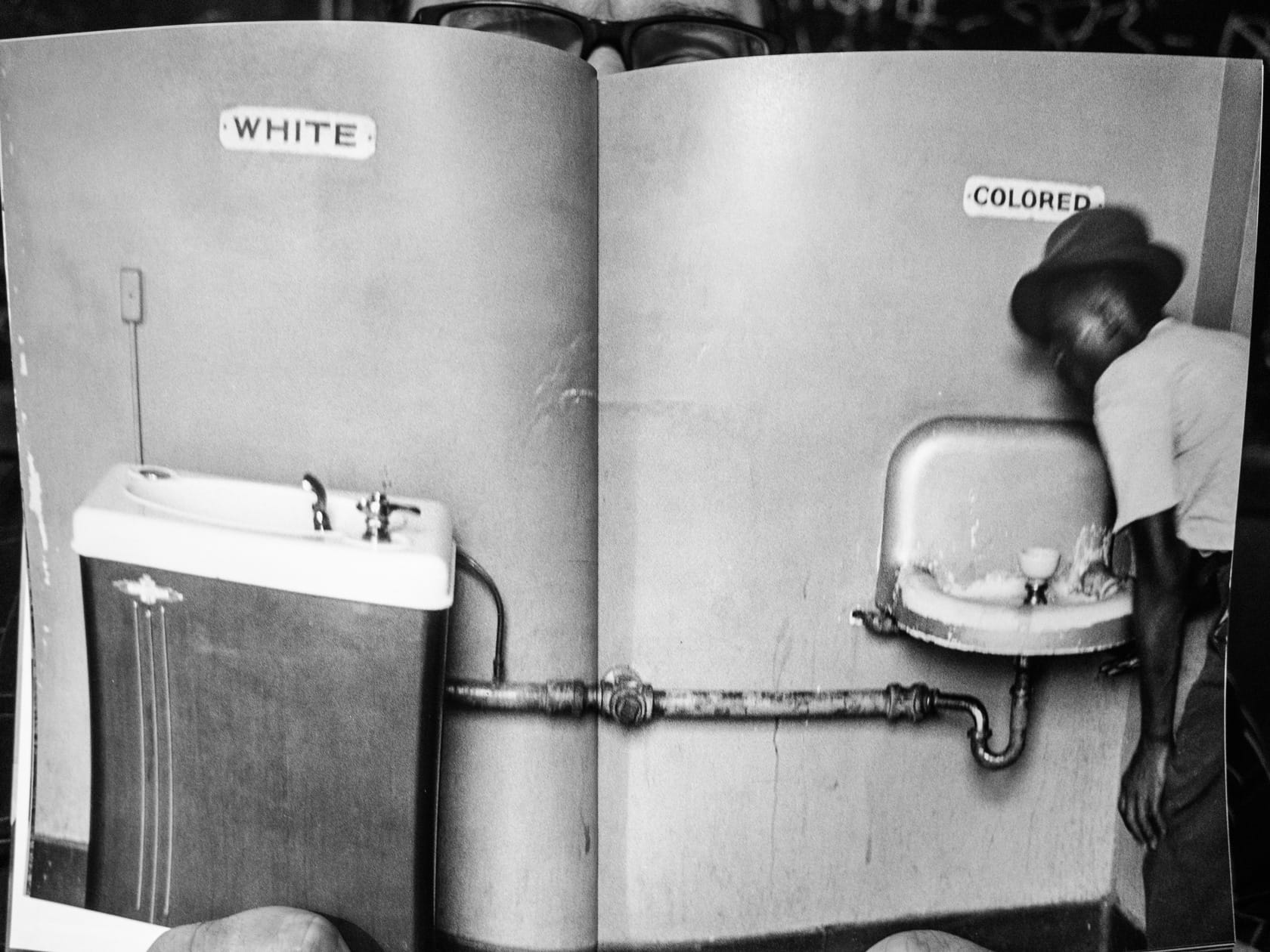 When selecting which Erwitt book to purchase, Personal Best was an easy choice. It was his selections and it is a truly massive collection. After reading the following quote from Erwitt in Time magazine, I knew it was the only choice.

“I suppose the book that has my favorite photographs is called Personal Best. As the title implies, it has my better pictures. This kind of book is a compendium of my work. It’s just going through my checkered career and picking stuff out that seemed to be a good picture or story or good situation and then putting it together in some kind of design-y way — that’s how you do a book. Or at least this kind of book…a retrospective.”

Personal Best is a monster of a book, and that is testament to how gigantic Erwitt’s career is. Weighing in at over five and a half pounds, this is no backpack traveler. Unfortunately, the book’s dimensions, approximately 12″ (30.48cm) x 9″ (22.86cm), make it a truly unwieldy beast. A wider design may have made for easier handling, and served some of the plentiful full-page, full-bleed spreads better. Regardless, this book is meant for an extended stay on a table. To be spread out and explored. 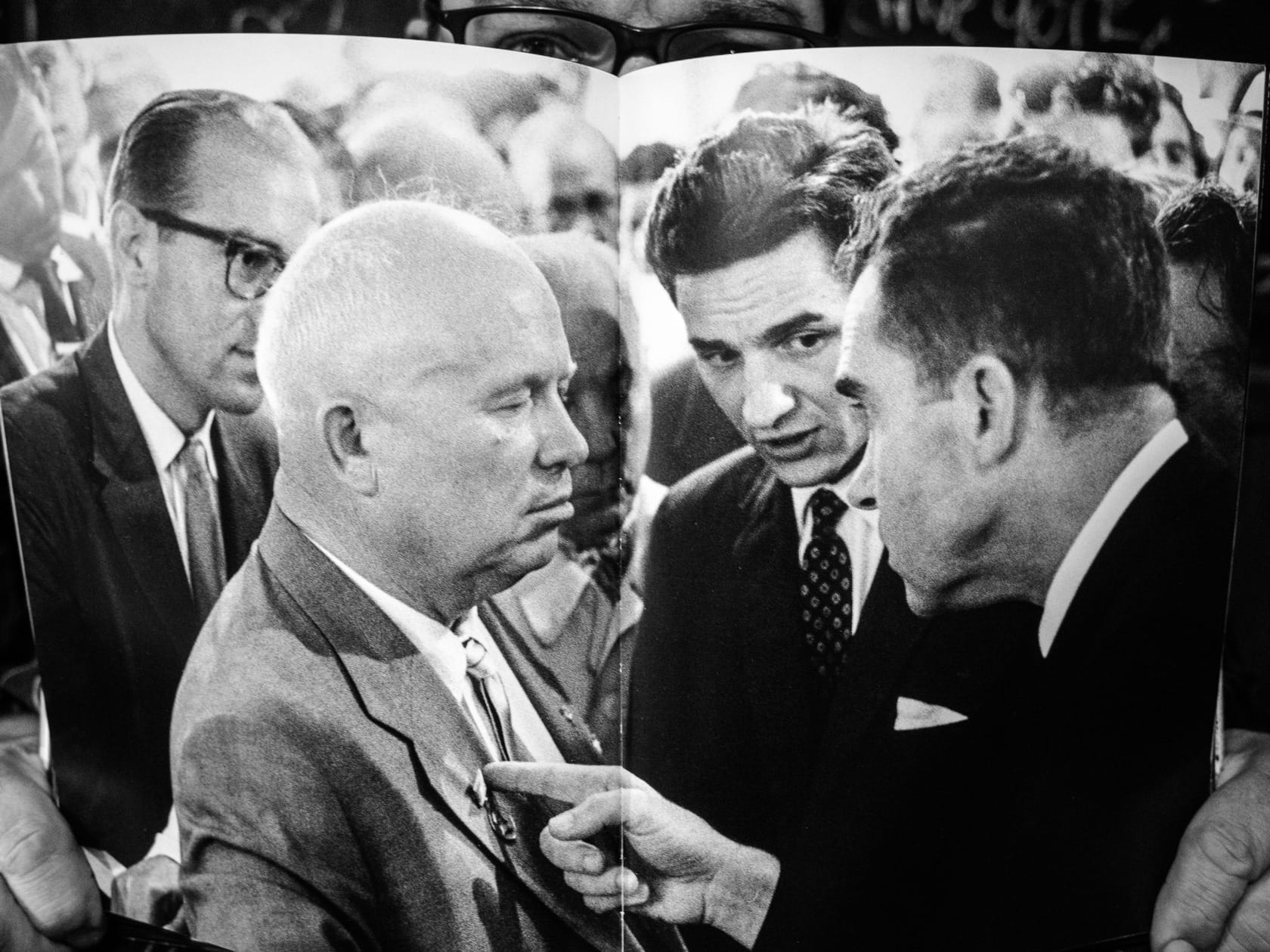 With his selections for Personal Best, we get to see not only how talented the master is, but how versatile he is. We’re treated to his journalistic work with a few images like the iconic shot from the “Kitchen Debates” with former President Richard Nixon poking Soviet Premier Nikita Khrushchev’s chest in Moscow, 1959. A grief-stricken Jacqueline Kennedy at Arlington Cemetery from 1963. Muhammad Ali and Joe Frazier in the boxing ring from New York City, 1971. A portrait of Che Guevara from Havana, 1964. And then there’s the celebrities. Arnold Schwarzenegger. Marilyn Monroe. Marlene Dietrich. Marlon Brando. However, as great as all this work is, Erwitt’s mightiest powers are his capability of capturing the “decisive moments” and his legendary wit.

“it’s about time we started to take photography seriously and treat it as a hobby.”

His street photography collected in Personal Best displays how serious of a hobbyist he is. “I’m an amateur photographer, apart from being a professional one, and I think maybe my amateur pictures are the better ones.”

The fruit of the amateur Erwitt’s work is, ultimately, the smile brought to our faces. A dog sniffs at another’s posterior on the beach while a “cheeky” woman stands just off to the right. Another diminutive Chihuahua stands dwarfed by the towering legs of it’s human and another much larger dog. An Asian woman walks away from the Mona Lisa bearing a smile that is similar to the one on the masterpiece. Two beaming older women looking up at a naked man in front of them. A priest sits at an outside confessional while two women further back in the line seem to be enjoying a private joke. 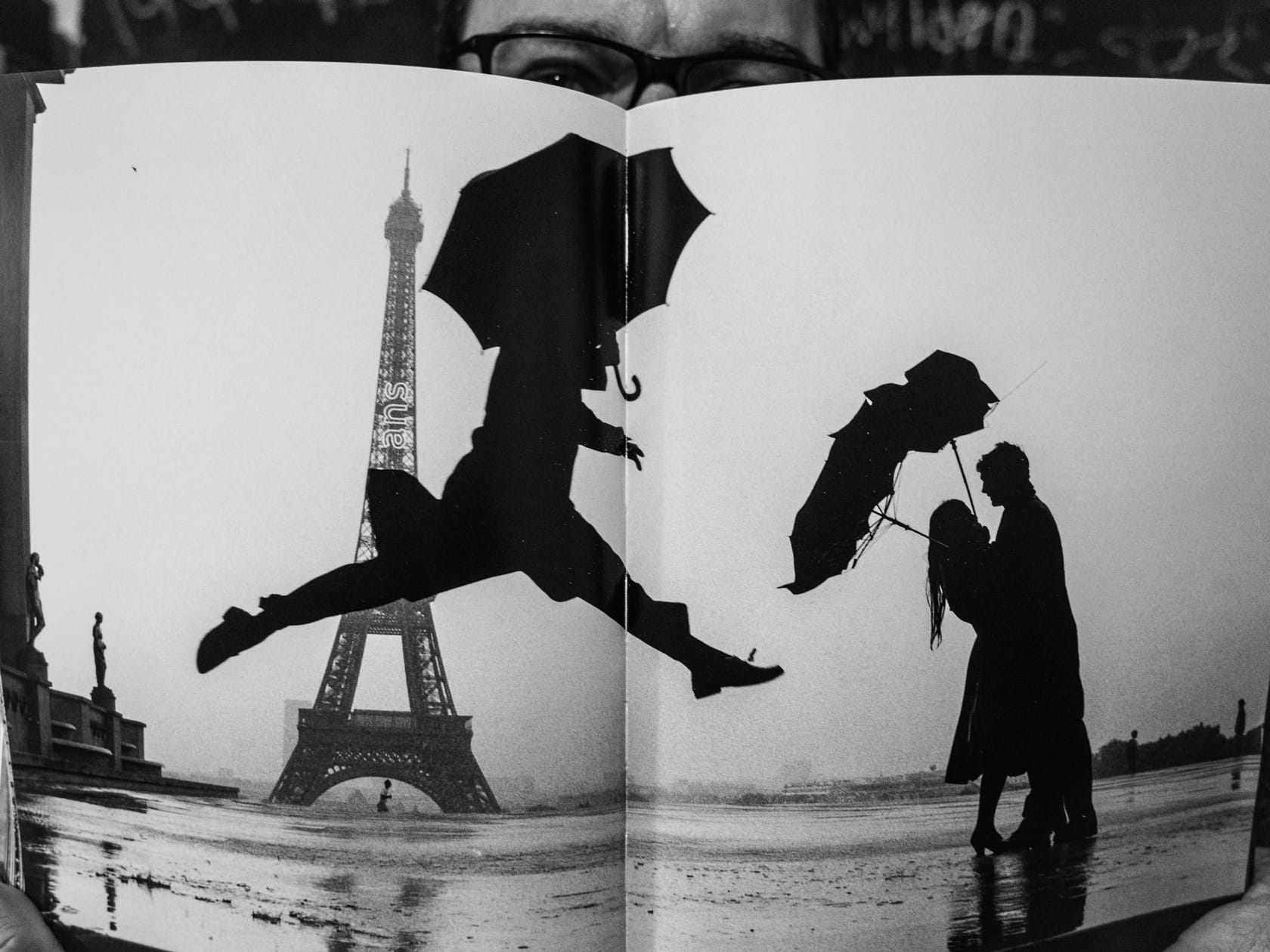 Erwitt also flexes his artistic muscles in this collection. Plays on light, shadow, silhouettes and geometry. Nudes. A young mother lovingly gazes upon her baby. Some of the work can indeed be considered fine art photography. Again, Erwitt’s versatility is on display.

A picture of a crucifix beside a Pepsi billboard shows the ironies and juxtapositions Erwitt can spot. Even with the sequencing of images in Personal Best, Erwitt gives us irony. For example, on one page there’s an image of a baby in Ku Klux Klan attire alongside a sign that says “Welcome All Klansmen & True White Patriots” from Louisiana, 1976. On the opposing page is a 1954 image of a black preacher or minister in Alabama with a man in the foreground covering his eyes in either a state of grace or possibly grief. With this contrasting edit, Erwitt brings to the conscious the racial problems from our past that still plague this country to the day.

One thing that’s lacking in Personal Best is text. All we’re given is a brief, but well-written introduction by Sean Callahan and a short acknowledgment. It’s a huge difference composted to the amount of text in say, the Garry Winogrand retrospective, which contained a few generous essays. But the fact is, there’s no essays needed in Personal Best. The hundreds of images need no accompanying text. There’s no real mysteries in Erwitt’s photographs. Perhaps some questions, but no mysteries. They tell stories. They’re artistic. They’re witty. They’re good photography. Like Erwitt said, “the whole point of taking pictures is so that you don’t have to explain things with words.” 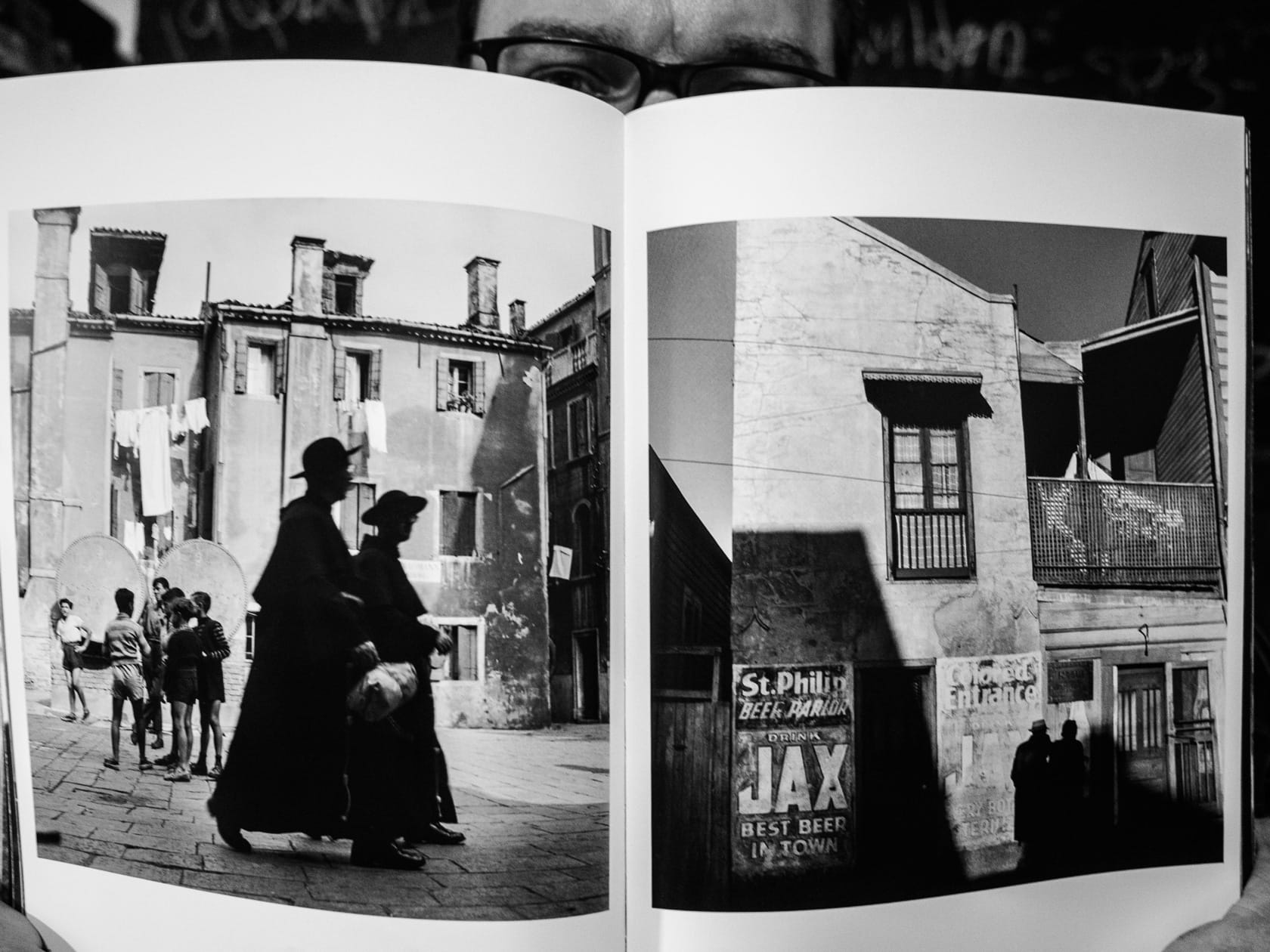 At close to $50 USD, Personal Best is no small investment, but it is a rock solid one. There’s several of his famous images that I’ve seen time and time again in articles online. But there’s many, many more that I’ve never seen and that are equally magnificent. The quality of the book is superior and the sheer volume of images inside make the book a good value. Like mentioned previously, Personal Best would have been presented better in a larger, landscape-sized book. However, publishing it that way would have likely priced it out of the range of most folks’ budgets. With this presentation, we’re given an extremely generous portion of a master’s catalog at a reasonable price point. 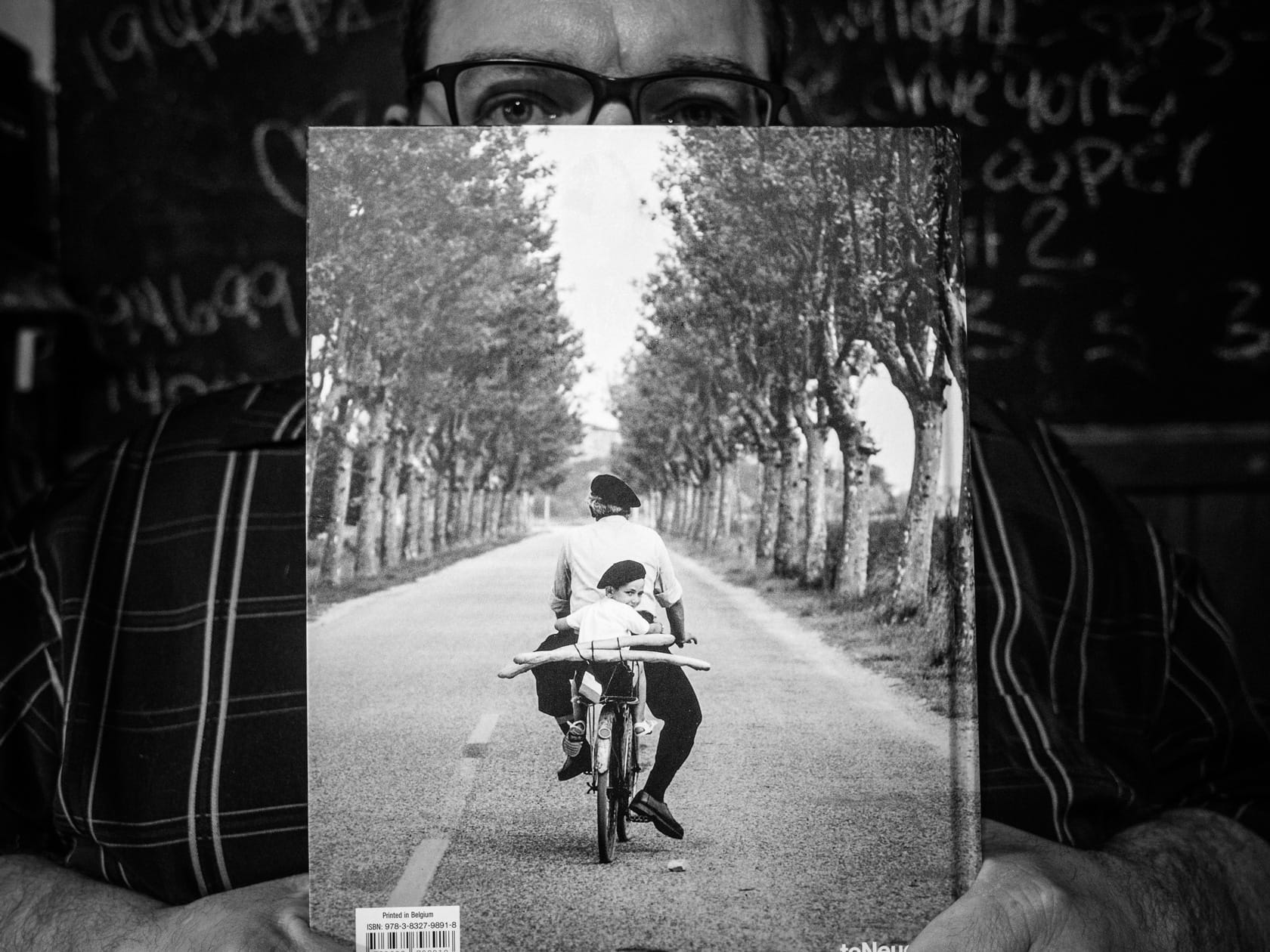 But the volume of stellar images within Personal Best does still beg the question… did Elliott Erwitt have any darlings to kill?