‘Running the Escalators’ is our Crit My Pic this week, and it’s a street photograph that has been submitted by Aschwinn Smith. I’ll be taking a look at this photo and examining how I think it performs in terms of point of view, focal point, composition, exposure & colour, subject matter and mood. If I can, I’ll also make suggestions for ways I think the photograph can perform better in these criteria. If you have a street photograph that you’d like some feedback on, read through the submission rules at the bottom of the page and submit your photo to us via email.

I really like the point of view in ‘Running the Escalators’. You can really mess with the viewer’s mind and open them up to a new perspective just by pointing the camera lens upwards or downwards, and that’s exactly what Aschwinn has done here. He’s taken advantage of his location at the bottom of the Maastunnel in Rotterdam to produce a really unusual low level viewpoint, almost like looking up from the sewers or something! It’s a great example of picking a fantastic and interesting location and making it play an important role in the photograph. Excellent location scouting Aschwinn, well done!

One of the common areas of improvement I end up suggesting in many Crit My Pic features centres around the focal point. That is because received wisdom and the general rules of ‘good’ photography (and in many respects, visual art as a whole) advise a clear and obvious focal point for the viewer’s eye. This can often be very important in street photographs, given the human element in them. However, rules are there to be bent and broken! I would be inclined to argue that Aschwinn actually has THREE focal points in this photo, and it’s a street photo that is none the worse for it! We have the man dressed in blue descending the stairs on the left hand side of the frame, the man in red jacket running up the stairs on the right, and the Maastunnel itself. All three form an interesting and cohesive set of focal points, and are well balanced thanks to Aschwinn’s composition. With an interesting choice of location, there’s no reason why a location and background can’t play a significant role as a focal point in a street photo, and that’s certainly the case here.

You can see Aschwinn has placed his two figures roughly in a line with one another across the horizontal on either side of frame. The man in the left in blue is slightly higher, and I think this slight imbalance is quite effective as it disrupts the symmetry, and perhaps could be even more effective if more pronounced. The head of the man in blue is actually sited very close to the golden ratio point, as you can see from the marker, so the eye is partially drawn to him initially, then makes a journey across the frame, taking in the lines of the stairs and tunnel and then also the man in red on the opposite side of the frame. I also like how the line of stickers on the right hand staircase form a leading line a bit like a set of footprints that runs parallel to the path of the man in red. There are lots of compositional elements in this photo, all with the result of producing an interesting street photograph.

I think that it is essential to the success of this photo that Aschwinn shot in colour. While we do have some nice lighting created by the strips of fluorescent lights and nice effects on the polished reflective surfaces of the metal stairs, the colour in this photo truly gives it more depth. I like how the muted hues of the tunnel are both harmonious and complementary with one another, as this allows the tunnel to function effectively as a background without being overpowering. Where the colour is most important though is in the clothes of the two figures in the scene. I don’t know how Ashwinn arranged it that the two figures in the shot would be dressed in such powerful primary colours, but the effect is brilliant. Not only do the runners stand out from the background in the shot (and thus become more effective focal points), but they also contrast really nicely with one another too.

I have seen photos like this made before, with similar viewpoints looking up or down flights of stairs and escalators leading from tunnels and, most commonly underground subway or metro stations. One of the nice things about this shot though is the colours and decor in the Maastunnel – their muted tones and Art Deco and ‘40s vibe mark a nice departure from the usual uniform grey of a subterranean stairwell. The real area of interest in terms of subject matter though is what the figures are doing. The fact they are ‘Running the Escalators’ as the title suggests, instantly makes this photo more unusual. Both men are wearing workout clothes, and as Ashwinn explained his email are part of a group of joggers who run up and down the escalators in the Maastunnel every Saturday morning. How weird! This is just the sort of weirdly unusual occurrence that’s great to see in a street photograph. One possible way I thought this shot could potentially be improved slightly if it had more joggers in it. I’m imagining how strange it would be if we could have a line of several of them following each other up a single stair case, or perhaps two more joggers running up the two staircases in the middle. It would be great to have a diagonal line of joggers across the frame moving lower from left to right!

As I’ve said, people jogging up and down escalators in a subterranean tunnel isn’t a sight you see every day, and this oddness gives ‘Running the Escalators’ a surreal mood. The weird and wonderful like that is always welcome in a street photo, particularly when you consider the journalistic potential of street photography to show us scenes that we wouldn’t normally come across. The perspective and point of view of this shot also add to the mood in a positive way I think, giving it a slightly detached, lonely feel. The fact that we are trapped in the bowels of the tunnel gazing up towards the light makes us feel quite detached from proceedings, and is unsettling in an interesting way. I like it! 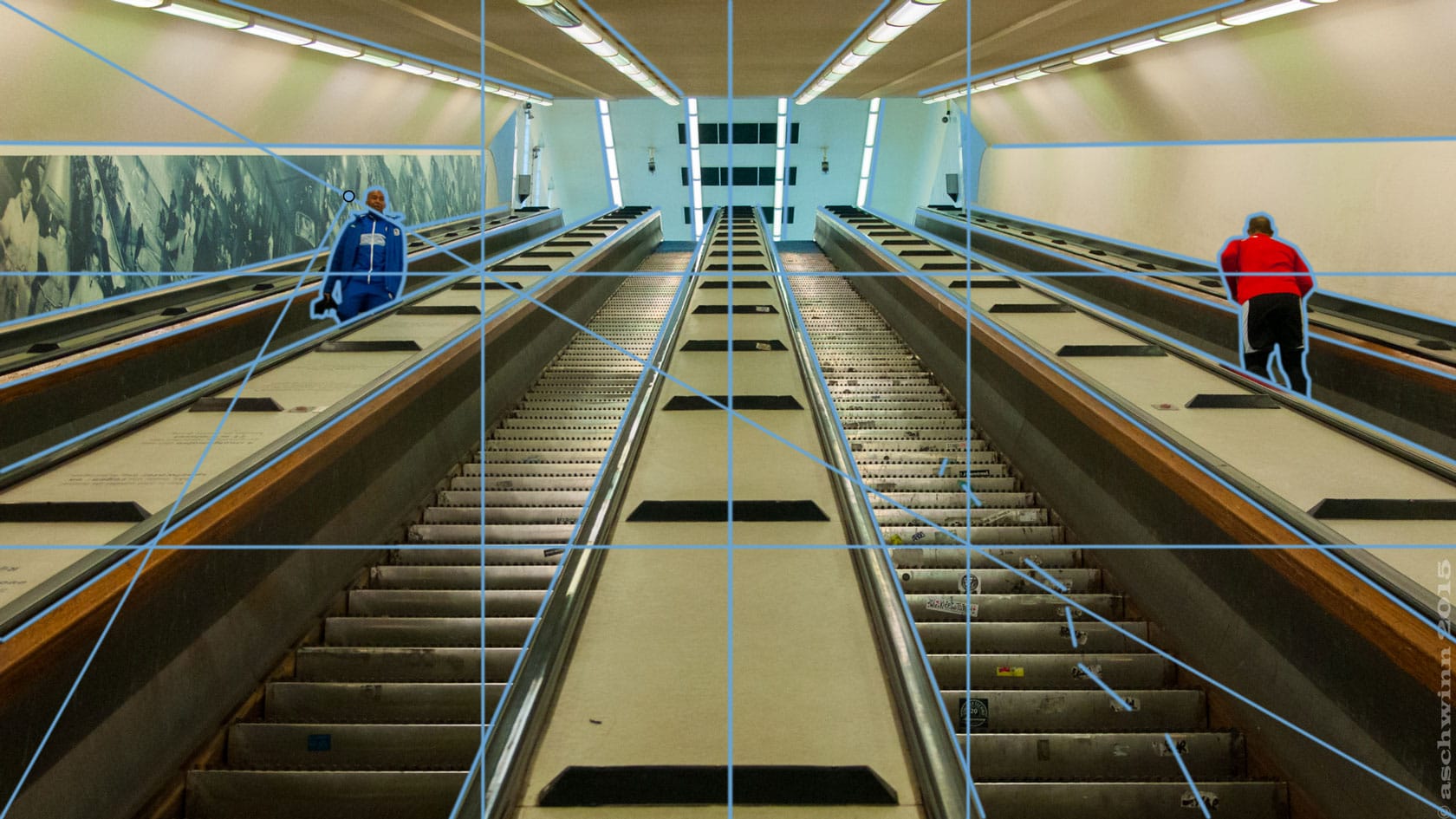 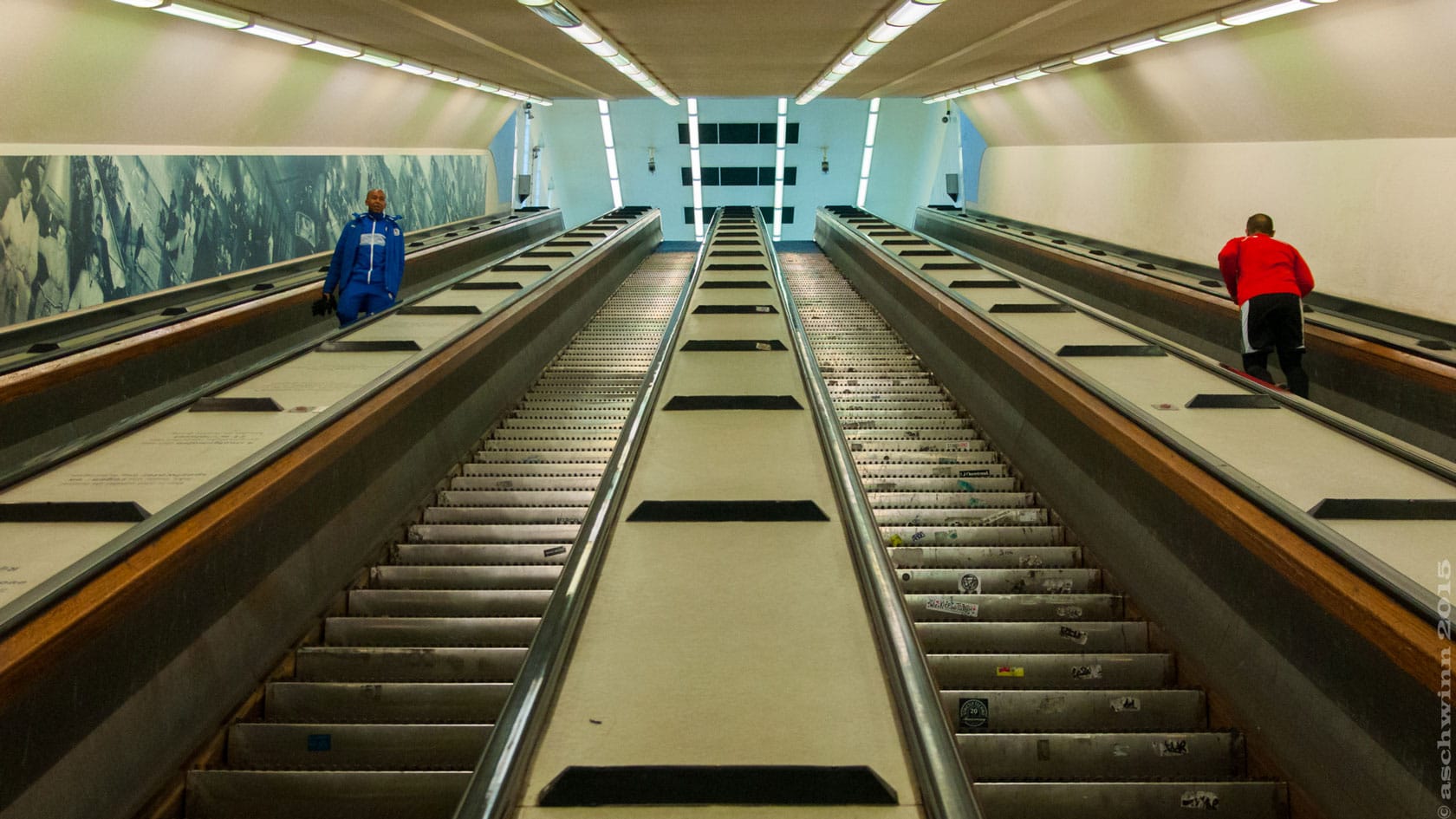 As you can probably tell from my comments, I like this photo. I am a big fan of street photos that use leading lines, and I am very partial to minimalist and symmetry influenced photos, which is something else ‘Running the Escalators’ demonstrates. That fact that it includes an element of the bizarre in the escalator joggers is a brilliantly surreal twist, and takes this photo another step further. I think when teamed with a body of similar work around similar themes, and as part of a project around perspective, leading lines, and unusual viewpoints in urban structures and street photography Aschwinn would have the makings of a very compelling portfolio with a distinct style. Good work!