Street Photo of the week by Danielle Houghton

Danielle Houghton is a Street Photographer from Dublin, Ireland. She has been in love with photographer ever since she was a teenager and has been street shooting constantly since 2010. She is massively attracted to the “odd in the mundane and find[s] that suburban life can be nicely quirky”. Her photos are colourful, surreal and humorous and just a joy to look through. She feels that the real beauty of photography comes from the individuality of each and every one of us and the unique moments we all live that can never be repeated.

Danielle has had her work exhibited in London, and has also won a couple of Street Photography competitions, the Urban Picnic International Competition and the London Transport Museum’s ‘Sense the City’ competition.

Danielle is not only part of the “OBSERVE” international photography collective but she is also its founder. The “OBSERVE” collective is focused mainly on the practice of candid Street Photography. You can find out more about “OBSERVE” and the rest of the members of this amazing collective at http://www.observecollective.com. Danielle is the second member of this collective that we have featured. In August 2014 we also featured the charismatic Chris Farling.

You can see more of Danielle Houghton’s photographic work on her Flickr account at https://www.flickr.com/photos/larking-about/, or on the “OBSERVE” website on the section about her at http://www.observecollective.com/Danielle-Houghton. 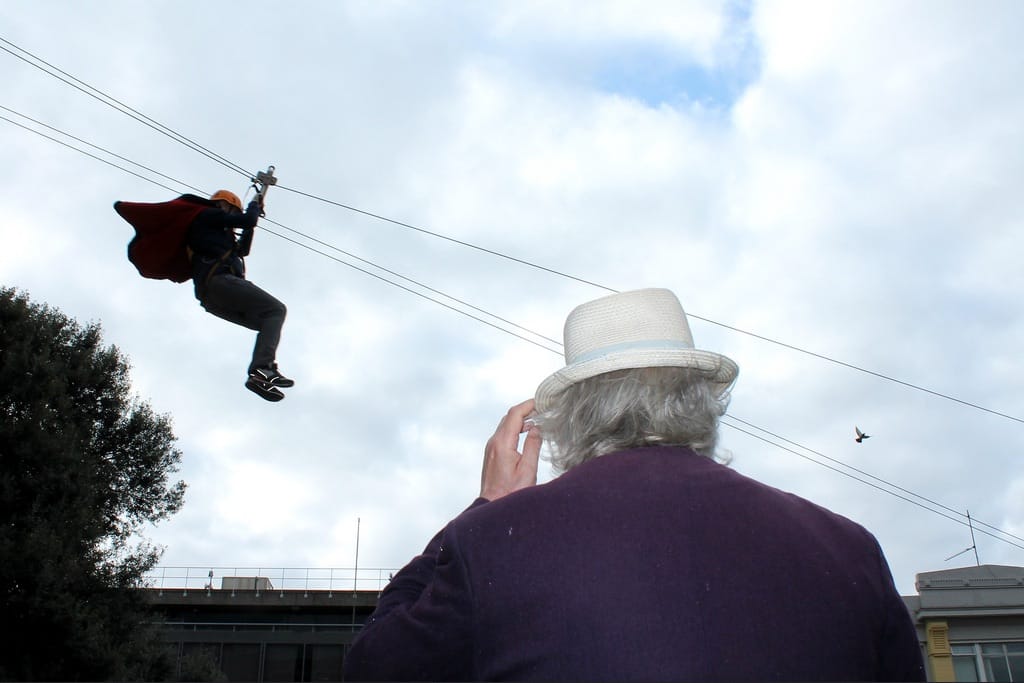 As I mentioned earlier Dianelle’s photos are humourous. There is a very apparent sense of humour in nearly every shot she takes. This is a talent that not many street photographers can claim to have. It also means that she sees things from an interestingly positive perspective, or at least that is how I feel about her work. In this photograph we can see a person wearing a cape zip, just like a superhero wiring himself downwards while at the same time a man is reaching for his hat, giving us the idea that he is about to tip it.

Compositionally speaking this photograph is in many ways outstanding. The wire splits the photo in two halves, the older man is precisely on the right rule of thirds vertical and the layering in this image has been done perfectly. We have the older man on the closest layer, the “superhero” on the second layer and the flying bird on the third layer. Without that bird the photo would not have been as complete.

As far as lighting is concerned, I love the fact that Danielle has used a flash to light up the older man. If she hadn’t he would have been a dark silhouette against the bright sky, making this photograph less interesting in my opinion. Hats off!