Visiting New York City is on many a street photographers’ to-do or wish lists. And rightfully so. It’s New York. The reasons for wanting to make a photographic pilgrimage there are abundant.  Think of all the famous street photographers that have shot there. Garry Winogrand, Paul Strand, Diane Arbus, Bruce Gilden, Mary Ellen Mark and Elliott Erwitt to name just a few. And there’s up-and-coming, future famous photographers putting out superb work right now. Khalik Allah comes to mind. And these photographers work in a streethunter’s nirvana. The Big Apple is an American city at maximum. A bottomless cup of cultures, characters and scenes. And, needless to say, the city is also a wellspring for the news photographer. In a city of over eight million people, there is news happening all the time. Crime, fires, traffic accidents. And no one photographer in the 1930’s and 40’s could work the streets better than Arthur Fellig, better known as Weegee.

Weegee (1899-1968) literally had his finger on the pulse of the city’s denizens during the 30’s and 40’s. When it was racing with excitement and when it was pumping its last, dying beats. He was a street photographer, no doubt, but his bread and butter was news photography. After working briefly as a commercial photographer, he began freelancing, and he was a creature of the night. He hung around Manhattan police headquarters starting around midnight, without credentials, checking the teletype machine for reports then race to photograph them. Eventually he got a press card, a Chevy Coupe, and a police radio. Weegee converted his trunk into a portable darkroom so he could have the photos to paying customers faster than anyone else.

But it wasn’t just Weegee’s ability to be on the scene first (his pseudonym is said to be a phonetic play on Ouija because of his seemingly precognitive ability) that made him legendary. He was a tremendously skilled photographer. He could compose under great pressure and do it well. He was able to connect emotionally with subjects that were in the scene and pass that connection to the viewer. He gave the newspapers the action and the drama they demanded and that the public craved. However, Weegee was also very capable at catching fleeting, touching moments of everyday life that didn’t involve a fire, murder or other catastrophes and misfortunes. He could shoot these moments that we would classify as street photography.

The Weegee Guide To New York

I was searching for a book of Weegee’s work when I came across The Weegee Guide To New York (Prestel, 2015). A quick review revealed that this was not a typical photobook. In fact, I don’t really consider it a photobook at all. It’s a historical, photographic travel guide by one New York City’s most intrepid and talented photographers. 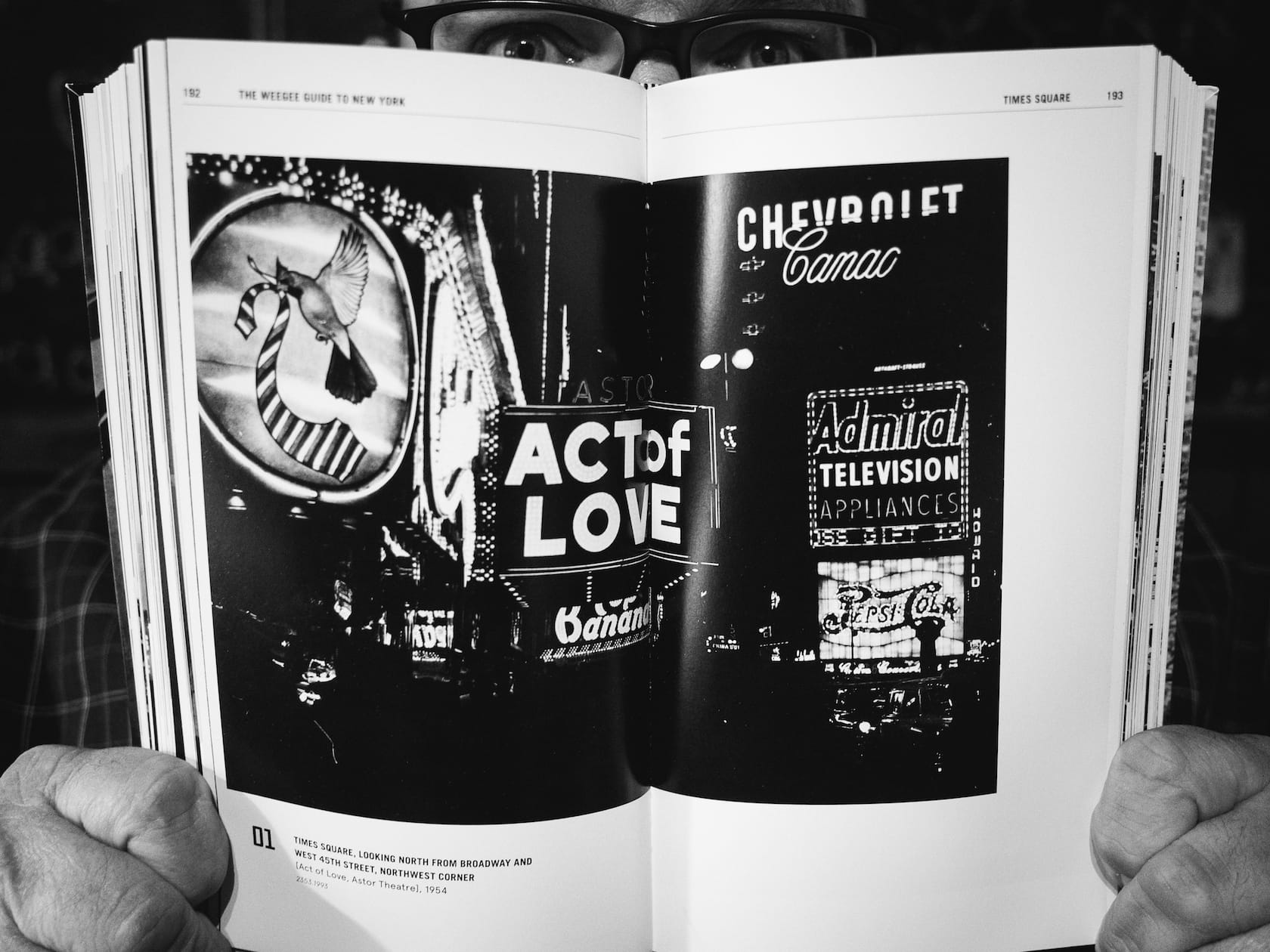 The size of the book immediately tells the reader they’re in for something different than the typical photobook. At 9″ x 5.5″, it’s not the size one comes to expect for a monograph or photographic essay. It reminded me of a travel guide. It’s not the most comfortable book to hold and it doesn’t “feel” right spread out on a table. I can picture an urban explorer or traveler reading it on a bus, subway or in a car or a cab. Reading it in little snippets between stops. Making the “guide” even more awkward is the thickness of the book. At 432 pages, this thing is like a brick. But even though it’s awkward, this is a brick of Weegee gold. 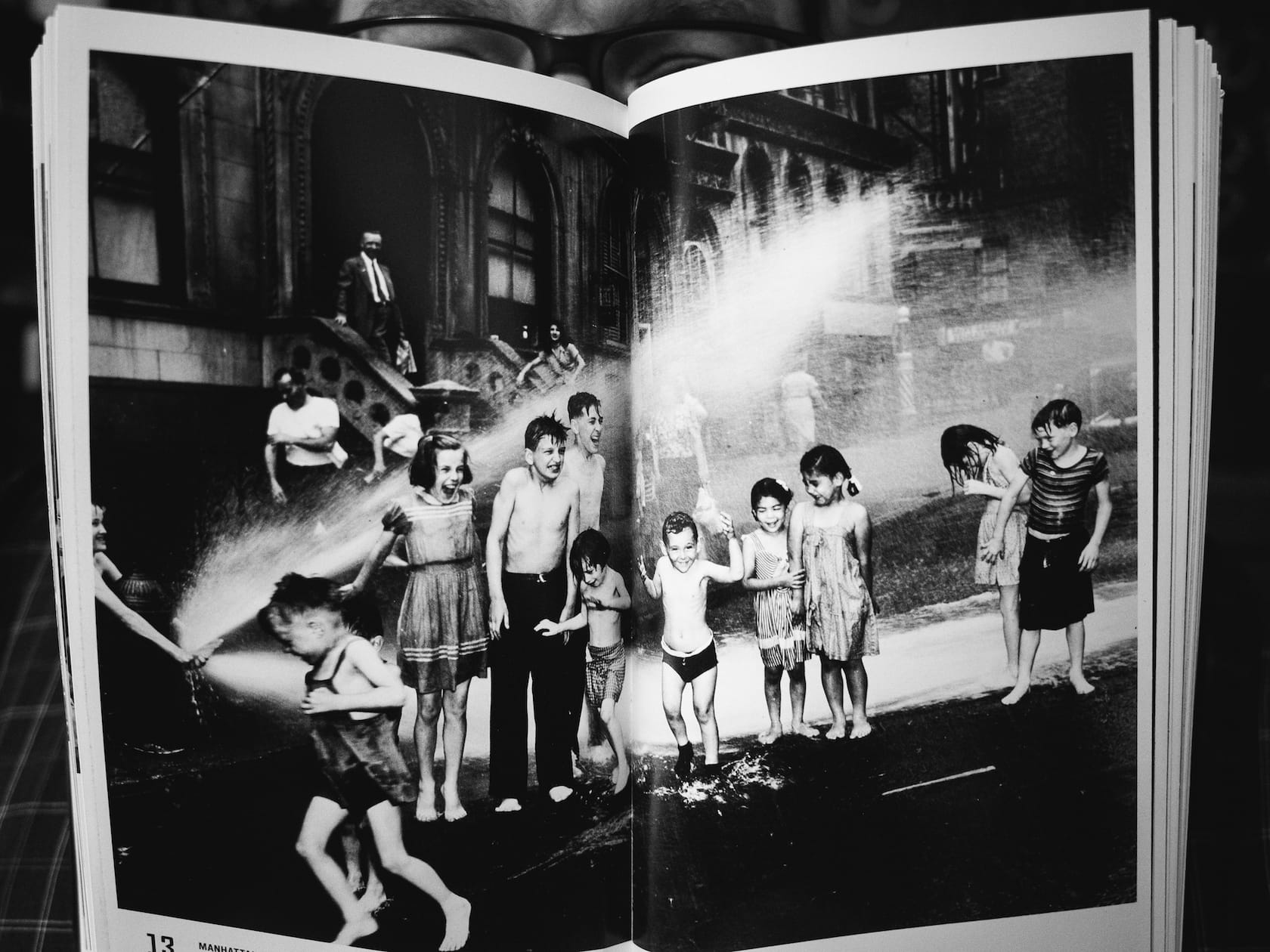 Between the flexible covers is the New York of the 1930’s and 40’s that Weegee owned with his Speed Graphic camera. There’s eleven chapters in the book and each represents a chunk of Manhattan that he covered, except for one chapter for Brooklyn and Rockaway. Lower East Side, The Village, Times Square, The Upper West Side… they’re all represented within. But the kicker is this… each chapter is begun with a four-page fold out map of the area of the city covered in the following pages. The left two pages of each map are circa 1940, and the right are circa 2010. On the maps are numbered symbols to match the photographs in the chapter. There are also symbols on the maps that tell if the photograph is of a fire, police action, vehicular calamity, murder, suicides, water main explosions and aerial views. I must say, these maps, outside of some of the larger photographs, are what make the book. Without them, it would just be an odd-shaped collection. With them, the “guide” concept is realized. It makes sense, and makes it a package. The maps turn the guide into an interactive experience. That’s cool. 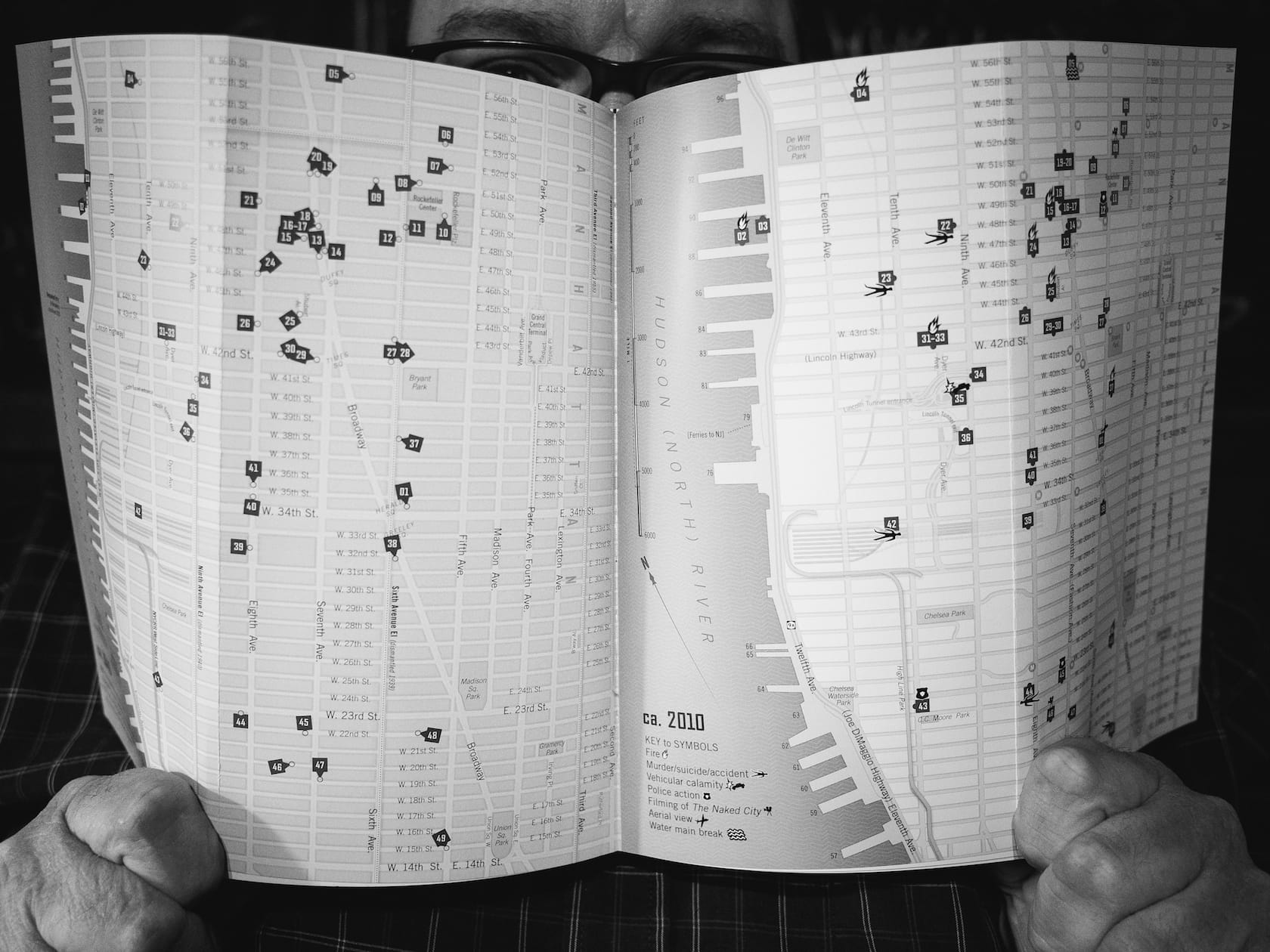 But what about the photographs? There is exemplary work printed here with just a few lesser-quality shots. However, the presentation of the images falls short on several pages. Some of the images are just too small. Though, given the size of the book and the concept, I get it. There are images that only take up less than a quarter of the page because of the space needed for captions. But, there’s plenty of gorgeous images that cover 3/4 of a two-page spread. There’s painfully few full-spread shots, though. Again, one has to realize that the layout of the guide is a factor. A guide with these dimensions and filled with two page spreads, would be completely unwieldy. My disappointment with the size of the images is matched with respect and admiration of the guide’s designers. The design and layout of this book, with the huge amount of images and organization involved, had to have been a monumental endeavor. Respect. 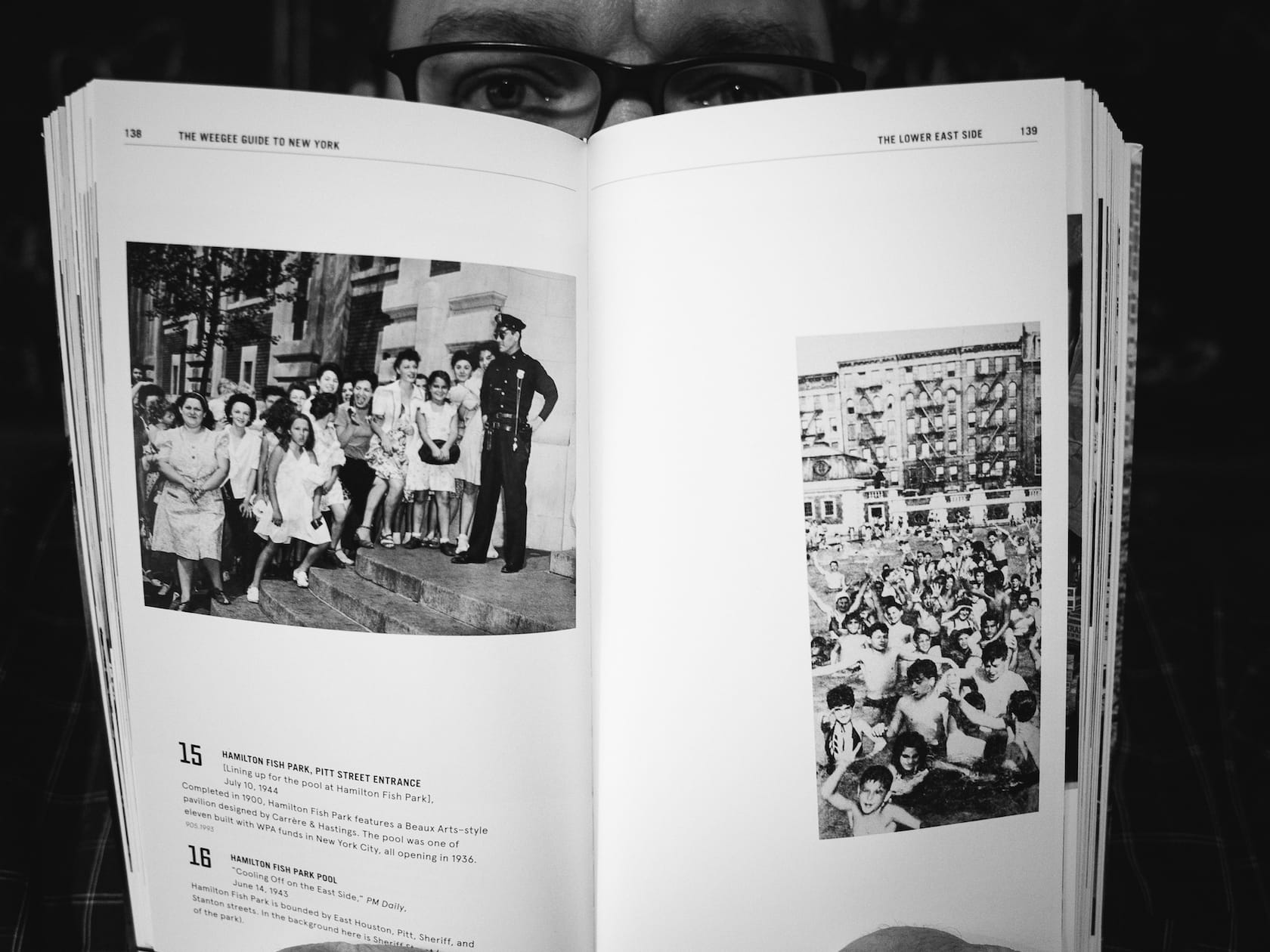 The guide’s authors, Philomena Mariani and Christopher George, both of the International Center of Photography have done an outstanding job of selecting the photographs used from the Center’s collection of over 20,000 of Weegee’s images. There’s an ample amount of news photographs… fires and car crashes aplenty. But mIxed in with those shots, there’s lots of images that would be classified as street photography. The delightful snap of children dancing under the spray of an opened fire hydrant. The commuter smiling into Weegee’s flash as her umbrella blows out in a wintry gust. Food rationing lines during wartime. Storefronts in Harlem. Bundles of newspapers on the sidewalk in the early morning. Crowds on the boardwalk and beach in Coney Island. Floats of the famous Macy’s Thanksgiving Day Parade. But don’t get too caught up in the softer side. Look, there’s the body of a stabbing victim stuffed into a trunk in Brooklyn. 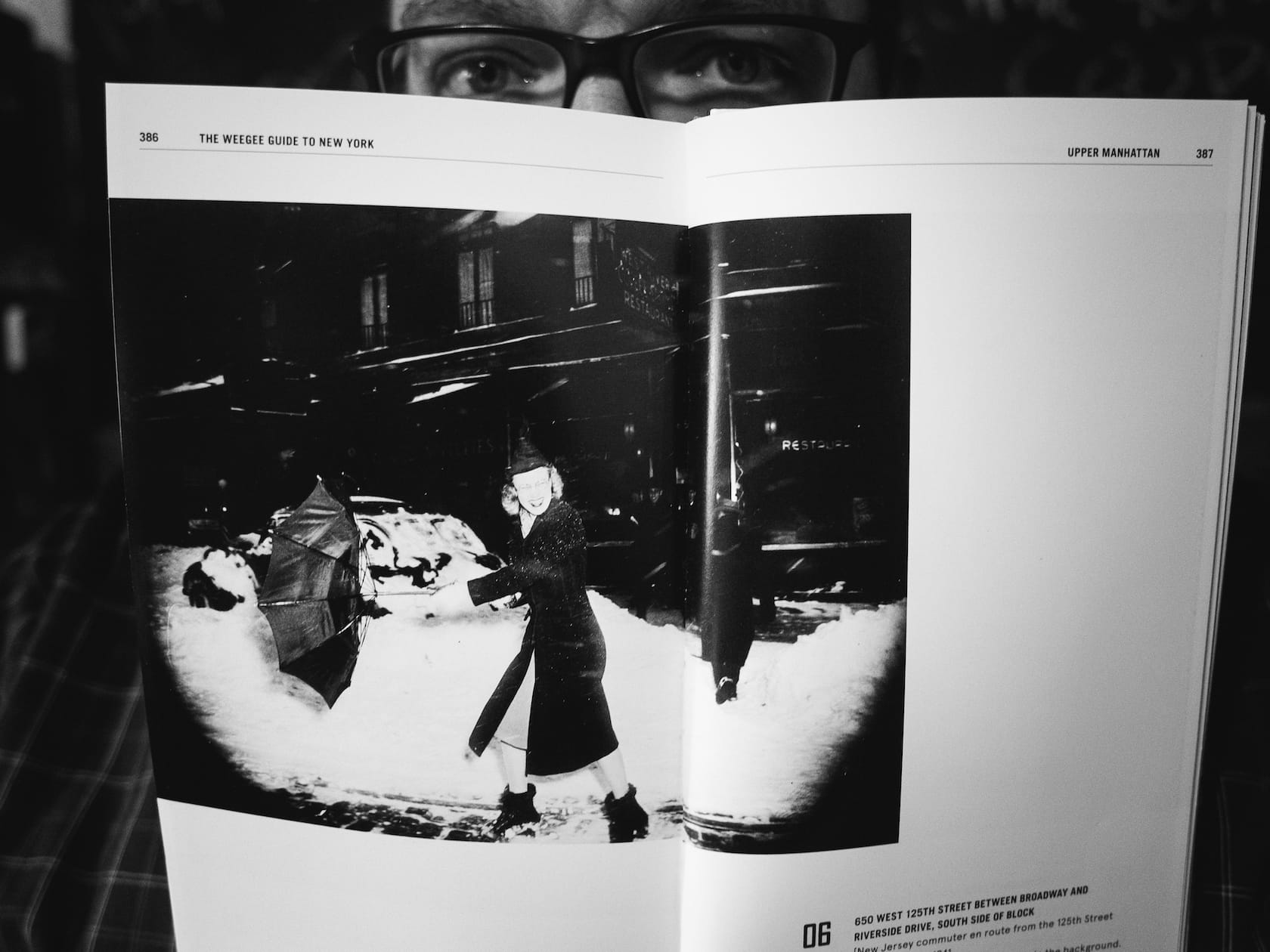 With this guide, Mariani and George have given us the true grit of the period, and the very core of The Big Apple. If I was a New Yorker, this book would travel with me frequently and it would surely be on the verge of falling apart. I imagine it being a delight using the maps, visiting the locations where the photographs were taken and comparing the then and now. Mariani even suggests using Google Maps to explore the scenes if we can’t make it in person, something I’ve yet to play with. Bottom line, The Weegee Guide To New York inspires the reader to actually explore even further, and that’s something not all photobooks do. 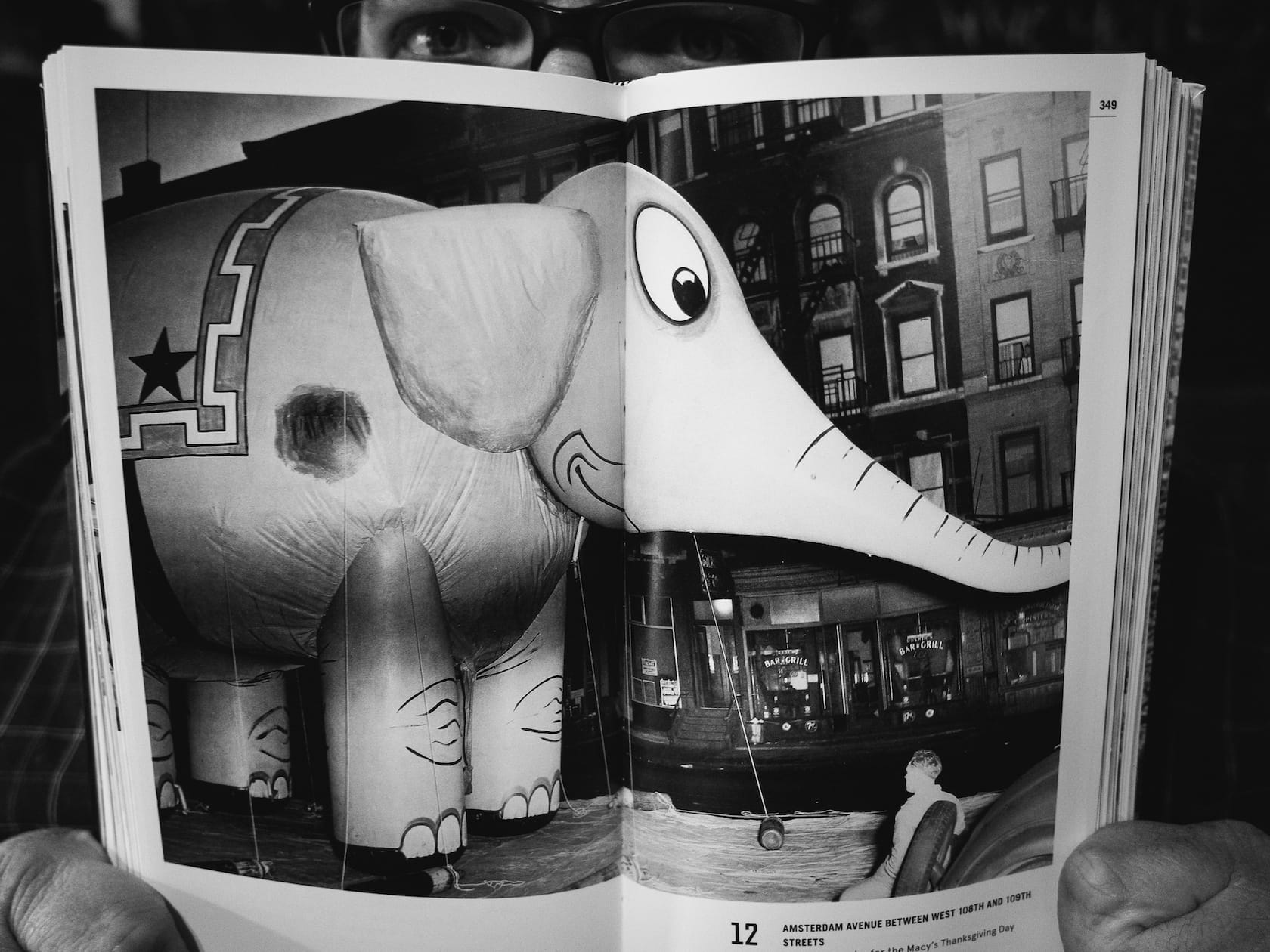 Even though the book is uncomfortable to handle, it really is a joy to devour. It’s a time machine that puts us in Weegee’s shoes, Speed Graphic in hand and cigar in mouth. “Weegee reveled in disorder,” Mariani said. With The Weegee Guide To New York, we get to revel in the disorder with him.

Order The Weegee Guide To New York on Amazon

Purchase The Weegee Guide to New York: Roaming the City with Its Greatest Tabloid Photographers

Purchase The Weegee Guide to New York: Roaming the City with its Greatest Tabloid Photographer