Street Hunters has returned from its winter break, and we’re looking forward to a fun year of street photography! For the first Crit My Pic of 2016 I’m going to be looking at a street photo by Gilberto Lacchia titled ‘Generations’. As usual, I’ll analyse Gilberto’s photo based on the criteria of point of view, focal point, composition, exposure, subject matter and mood, and suggest any ways I think it can be improved. If you’d like to have your own photo featured in this segment, please read the submission rules below and send us an email. Without further ado, we’ll crack on with the first Crit My Pic of the new year!

Gilberto has shot ‘Generations’ from around standard head height I think, as I imagine he wanted to give us a ‘normal’ view so we could concentrate on the subjects and theme of his shot (more on that later). The ‘standard’ viewpoint is very common across all genres of photography, and so departing from it is often a quick and easy way to make a street photo stand out from the crowd, and also create a shot that is more interesting. In this instance, if Gilberto’s photo had been shot from a lower angle, the sweeping curve of the archway and the shadow above it would have taken on a different look and feel and become more dramatic. However a lower camera angle would also have distorted Gilberto’s subjects, which might have distanced them from his theme, so I can see why he has kept things more conventional here.

We have the unusual sensation in this photo of our focal point actually being shadowy silhouettes, and four of them at that. While this does mark a nice departure from the norm, the fact that the lit portion of the frame is already a busy area does lead to a rather crowded shot, and one where the focal points are challenged for attention. There is a lot going on in the street through the archway, and subsequently focus is diverted from our focal points. The fact we have different subjects to focus on, and the effect of the broad depth of field does not help matters either. That said, I do like the ‘inverted’ effect in this photo with the focal points in shadow and a street scene behind, and I feel it is concept worth exploring with either a single subject, or one with a more distinctive silhouette.

Gilberto uses negative space well in ‘Generations’. The vertical lines of the wall either side of the arch run parallel to the frame, and they are balanced nicely close to the right and left hand sides of the frame. The negative space is created by the shadowy areas of the walls and the sweep of the archway, and both serve to encourage the viewer to look into the lighted central portion of the frame which is where the ‘action’ is. The shadows stretching from the feet of the four silhouetted figures also serve to create a nice link between them and the bottom edge of the frame. The heads of three of the four subjects also hit the second third of the ‘rule of thirds’ horizontal, which helps to make things more visually appealing, and two of the subject’s heads are located on the first & second rule of thirds vertical lines too. Our four subjects are also grouped around the centre of the frame which is good.

However, as I mentioned above, I do feel that this shot is a little busy. There is a lot going on in the centre of the frame with the lighted background, and lots of detailed features in the street scene. I think the composition in ‘Generations’ could have been improved if Gilberto had been standing perpendicular to the archway so that it appeared absolutely head on in the shot. This would create a strong sense of symmetry, and strengthen the composition as a whole. It would also simplify the shot to an extent – we wouldn’t have as much of the shops and buildings showing through the arch on the left of the frame, and things may feel less crowded. However, I appreciate that given that nature of Gilberto’s subject matter, and the mood of his photo, he may not have had the time to set himself up perfectly for the shot in order to capture the four subjects together under the archway.

I’m glad that Gilberto opted for colour for ‘Generations’ as it allows for a separation between the details of the street through the arch and the silhouetted figures walking through it. In monochrome, the shot would appear more packed, and there would be less detachment between foreground and background. The hues in the street scene are nice and vibrant too. For exposure, Gilberto has metered for the street through the arch, which leaves everything under the arch in shadow, and turns the four figures into silhouettes. As I’ve mentioned, this is an interesting effect, and a nice departure from the norm. Something I have considered though, is how this shot might look by metering the exposure for the street over by a stop or two. With a bit of subtle post processing by dropping the shadows on the figures in the centre to keep them as silhouettes, and perhaps raising the highlights in the street, we’d have a more blown out background that still retained most of the important elements that make the street interesting. A brighter street would provide more of a contrast with the silhouetted figures, and might make the shot appear less busy.

As mentioned, we have four focal points in ‘Generations’, which means that we have four subjects. Our four subjects are four people, and their silhouettes and the photo’s title suggests that they represent several different age ranges. At best guess, our subjects appear to represent at least two different generations, perhaps even three. What Gilberto has done is used the archway as both a bridge and a container to throw together this group of people to represent some of the spread of different ages that make up society. This is a nice use of street photography to show us a snapshot of street life and the span of different people who make up ‘the public’ we all see on the streets every day. Juxtaposition always provides for an interesting subject, so it’s nice to see it in evidence here.

As I mentioned, juxtaposition helps to represent the mood of this shot for me. We have the contrast between the older lady on the left of the frame with the walking stick hunched over and being led by the younger man, and the two younger women mirrored on the right of the frame. Not only do they have clearly different figures to the older woman, but they are also walking in the opposite direction, which serves to further heighten the feeling of juxtaposition and sense of contrast in the shot. I think that contrast and juxtaposition in street photography is an interesting theme and mood to explore, and a project based around young and old people and different generations sharing a space on the street could be something worth pursuing in greater depth. 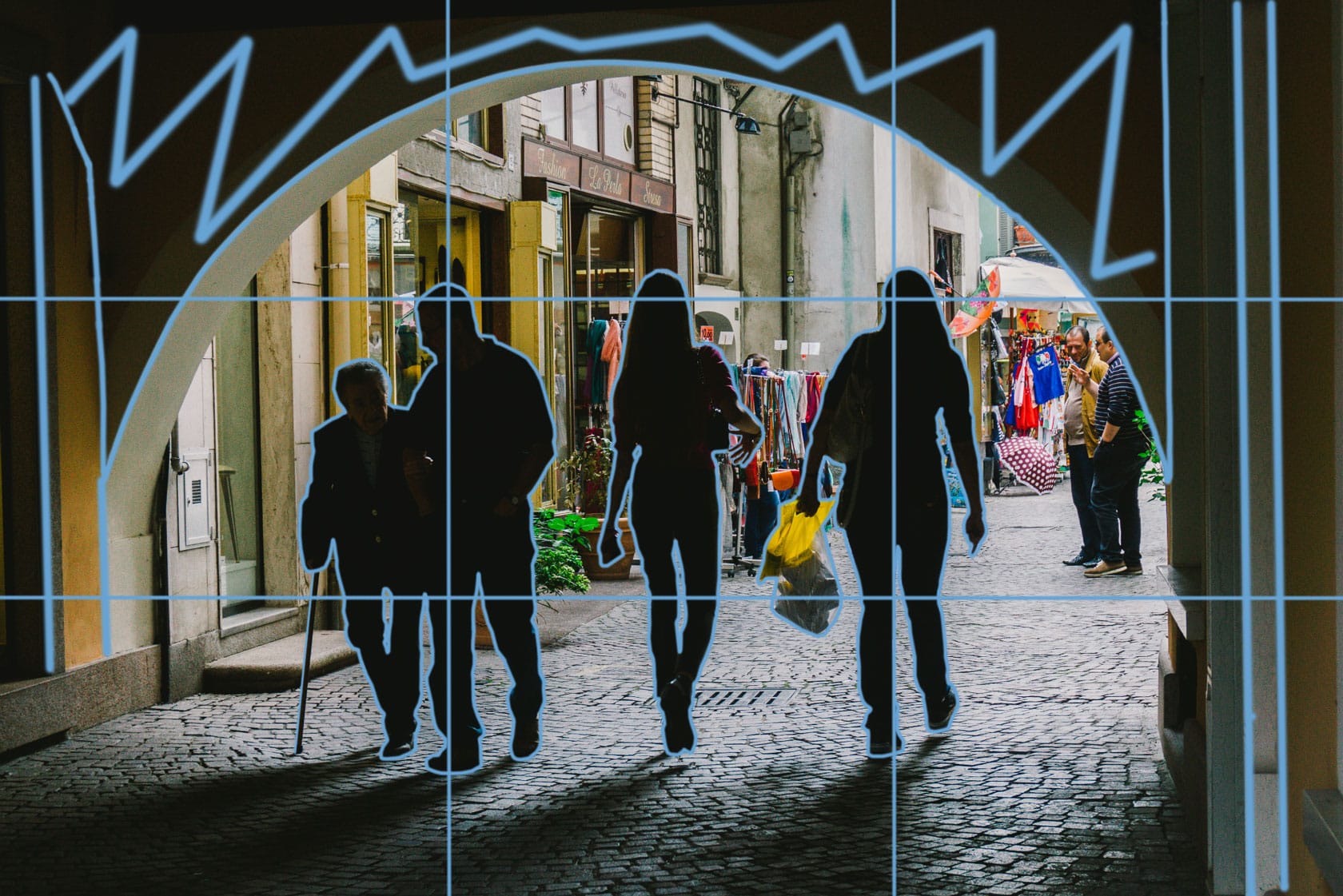 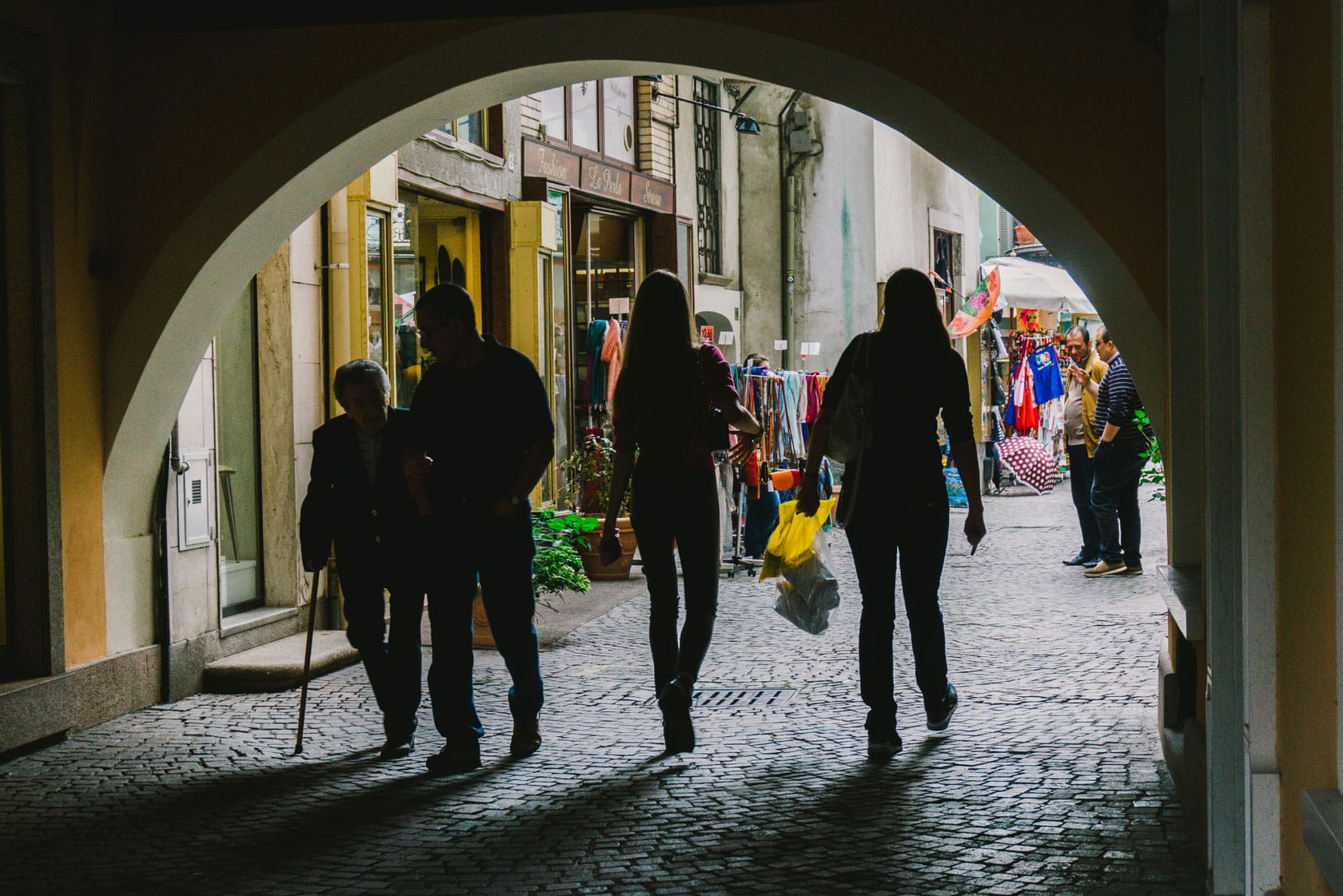 Gilberto has hit upon an interesting theme here, and I like the concept of the shot. I like the idea of ‘inverted’ lighting with a visible street scene as a background and silhouetted figures, and I also like the effect of the archway on the natural light in the shot as it adds an extra element of interest. I think that the composition in ‘Generations’ could be improved though, as currently the shot is just a little too busy for it to be as arresting or as visually powerful as it could be. I’m confident Gilberto could address these issues though, as I’ve seen excellent and masterful command and execution of composition in Gilberto’s other work. As I mentioned, I feel the mood and theme of the shot are also well worth exploring further, and I’d love to see him produce some more street photos with juxtapositions, contrast and ‘generations’ as a theme. Thanks for submitting Gilberto!