Few books have shaken up and influenced the street photography world like Robert Frank’s The Americans has. Fifty-seven years after its initial publishing, the book still is referenced heavily to this very day when discussing the advancement of photography and the genre of street. But The Americans is criticized and analyzed as much as it is praised. Rightfully so, considering it is such an iconic work. But is there a point where a landmark like The Americans starts to fade away as the landscape of photography itself changes? As street photography becomes more popular and diluted? As it becomes, dare I say, less “special”?

Those questions were part of the reason why I wanted to own The Americans for myself. That and because it almost seemed mandatory. Because it’s cited so often in the street photography world, I felt like I had to own it. That a photography library, no matter what size, could only be built around this cornerstone. The only other book that I can think of to bear such a heavy load would be Henri Cartier-Bresson’s The Decisive Moment. But, at close to $90 USD for its latest edition, that piece would have to wait. At under $25 new, The Americans, now in its ninth edition, demanded to be purchased, and sooner rather than later. Questions needed answers.

Robert Frank, whose background and influence I’ll write more about in the following installment of Under The Influence, came to New York in 1947. Born in Zurich in 1924, he arrived in the States a trained photographer and initially worked as a fashion photographer for Harper’s Bazaar. He also freelanced for other magazines as a photojournalist in the early 1950’s. During that same period he met Edward Steichen, who was then the curator of photography at the Museum Of Modern Art. Through Steichen, he met Walker Evans. Evans, who Frank would cite as an influence, insisted that Frank apply for a Guggenheim grant. Evans aided Frank with the application, proposing Frank drive across the United States photographing American life. 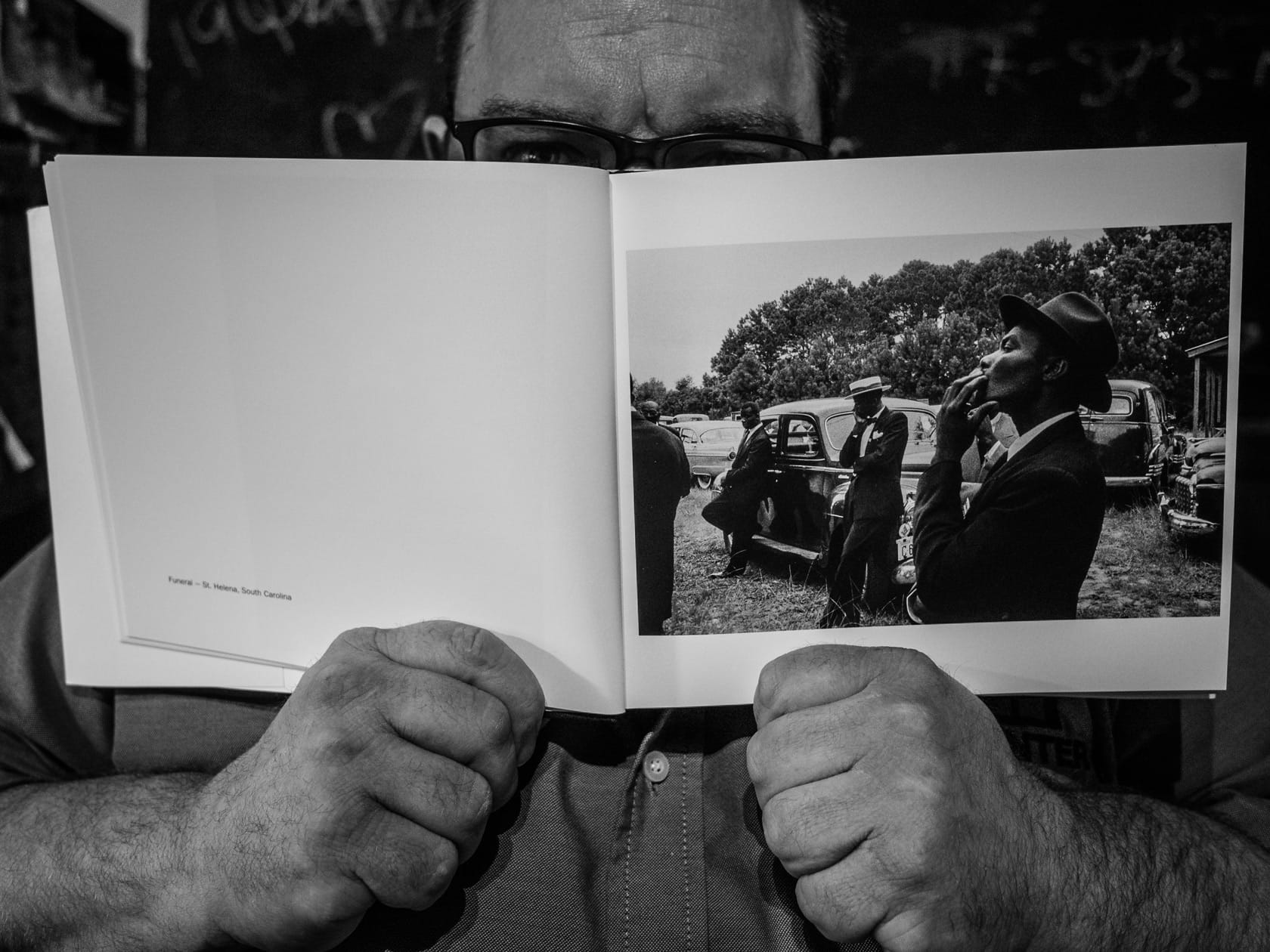 In the summer of 1955, Robert Frank was awarded the Guggenheim fellowship. Frank then embarked on a 10,000 mile road trip. He visited over two dozen States on three trips. From New York, through the upper heartland to the California coast, through the southwest and Texas and into the heart of the American south, Frank shot 767 rolls of film. When he was back in New York in June 1956, he reviewed the contact sheets and made approximately 1000 work prints. He spent the next year editing and sequencing the prints. He grouped them by themes such as race and religion. He also grouped by subjects like jukeboxes, cars and lunch counters. Eventually he whittled the 1000 prints down to 83. Those images would become The Americans. The book was first published on May 15, 1958 in Paris by Robert Delprie. That edition, titled Les Americains, included writings by Simone de Beauvoir, William Faulkner, Henry Miller, John Steinbeck and others. The texts, of which some were considered critical of the United States, were printed on the pages opposing the photographs.

“Popular Photography asked a number of writers to critique the book and almost all of them were very negative. It was described as a sad poem by a sick person.”

It didn’t stop there, either. Practical Photography derided the book’s “meaningless blur, grain, muddy exposures, drunken horizons and general sloppiness.” Aperture magazine’s editor, Minor White said The Americans was “utterly misleading! A degradation of a nation!” Frank himself said there wasn’t much support from the art world, either. “The Museum of Modern Art wouldn’t even sell the book,” he said. “But the younger people caught on.” 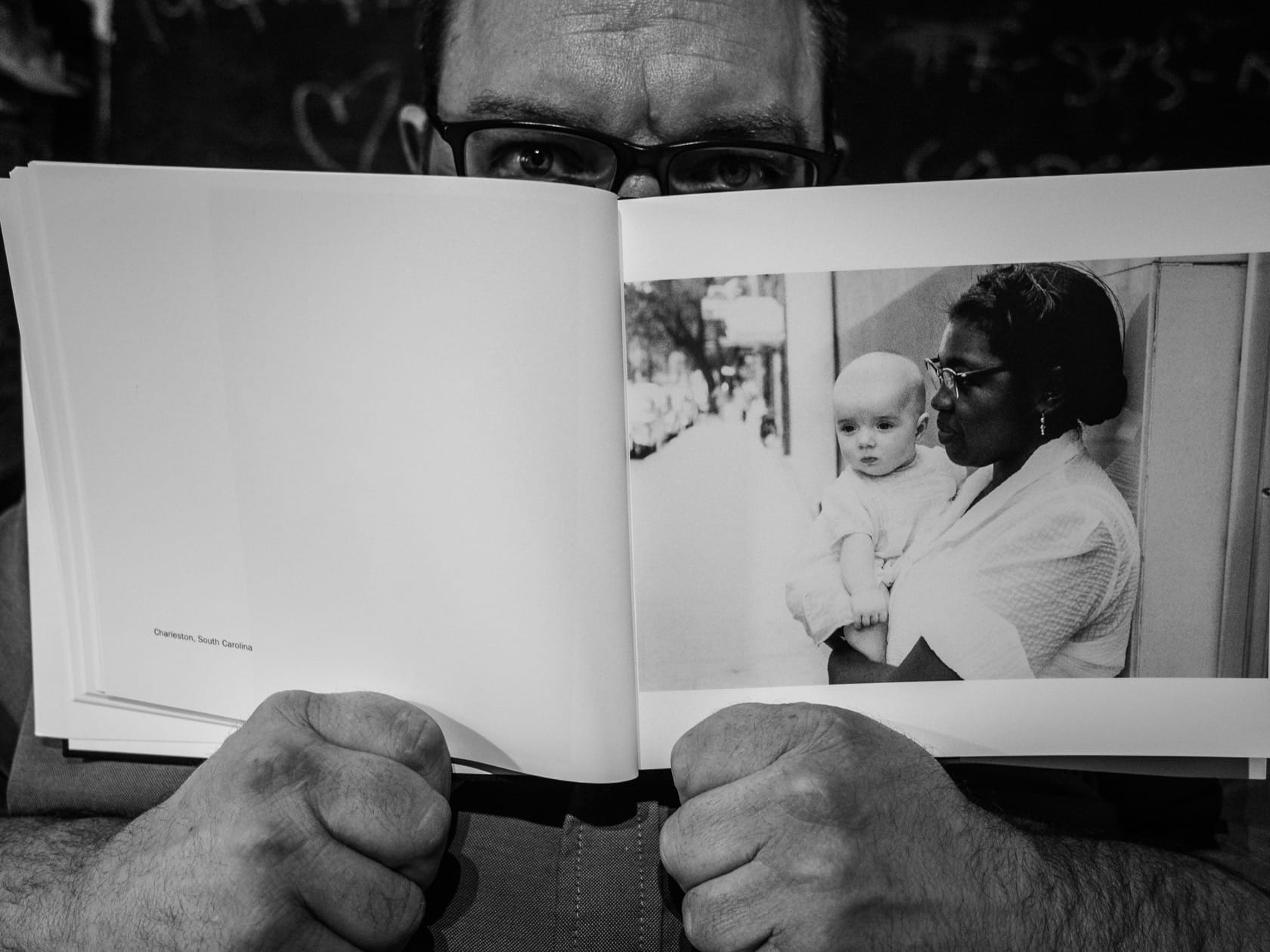 And caught on they did. The first edition sold out and fellow photographers and artists would go on to sing his praise. Photographer Tod Papageorge called Frank:

“the photographic equivalent of Rimbaud.”

“seeing The Americans in a college bookshop was a stunning, ground-trembling experience for me. But I realised this man’s achievement could not be mined or imitated in any way, because he had already done it, sewn it up and gone home.”

The “younger people” catching on were the spark that ignited a fire that’s still spreading, burning slow and steady for almost sixty years.

I’ve read so much about The Americans before I peeled off the cellophane, that the book was heavier in my hands than it actually weighed. Although small, at 7 1/2″ by 8 1/2″, the book held the massive heft of fifty-seven years worth of respect given to the sequence of monochrome images between its black, cloth-bound covers. For what it’s worth, I’ll pile my respect on as well.

After looking at the 83 images in The Americans it becomes obvious why the book was polarizing. This wasn’t a love letter to or from America. The images feel accurate. The work, as a whole, feels honest. And honesty isn’t always pretty. I was born only a decade after Frank’s document was published, and I found the content to be, in a sense, familiar. When Frank applied for his Guggenheim fellowship he stated he wanted:

“to produce an authentic contemporary document, the visual impact should be such as will nullify explanation.”

There is not a doubt that he accomplished that with The Americans. 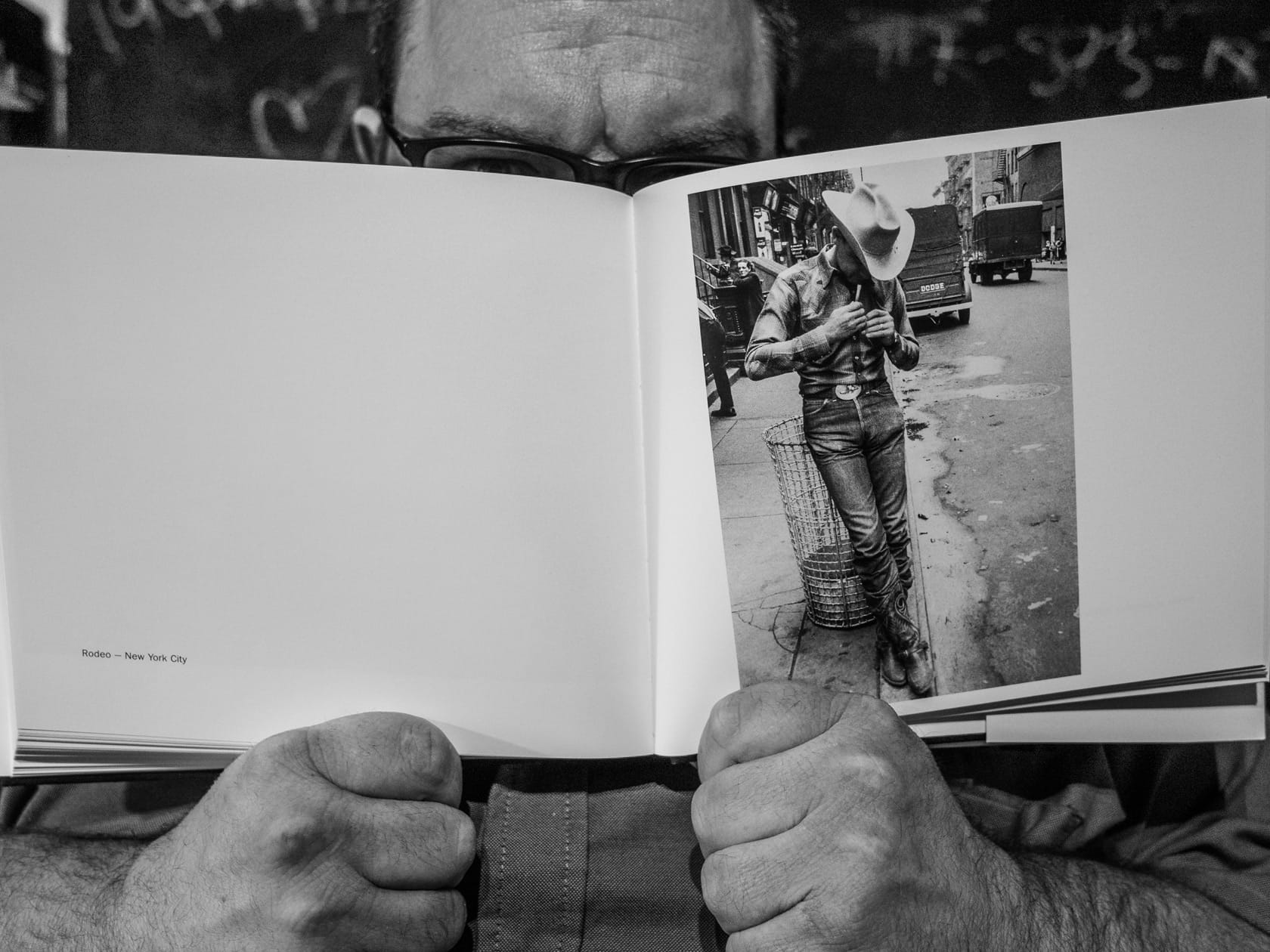 Standing the test of time

But what makes The Americans stand the test of time is the perspective Frank had and in the manner in which he captured the images. He was still a stranger in a very strange land when he traveled the country. The eyes he had could not be any fresher. What he caught with his camera was an interesting cross section of America in the 1950’s and his style was not conventional for the time. He embraced cropping, tilt, movement and grain. The blurry movement of an assembly line in Detroit. A candid capture of transvestites in New York City. A grainy capture of an “elevator girl” in Miami Beach. The delightfully overexposed picture of a black woman holding a white baby in Charleston, South Carolina. Frank also photographed some of the country’s ugly, segregated past. An image of a segregated trolley car in New Orleans follows a page with an American flag at a Fourth of July get-together in New York.

Robert Frank also captured very “American” things like jukeboxes, cowboys and the American flag. Cars, which the country still has a raging love affair with, play a big part in the book. Religious imagery. Politics. Funerals. Lunch counters. High society and the middle and lower class. Perhaps Kerouac said it best in his introduction.

“The humor, the sadness, the EVERYTHING-ness and American-ness of these pictures!”

Surprisingly, The Americans is often referred to as a sad or somber work. Kerouac even wrote,

I beg to differ. There’s joy on these pages. Young lovers in a park on a summer day. Newlyweds at a city hall in Reno, Nevada. And there’s hope. A highway in New Mexico, stretching beyond the horizon, placed in the middle of the book, gives the impression that there’s more down the road. What, we don’t know. But at least it promises a future. It’s hope. Which at that time was incredibly important. Consider that the civil rights movement was still in its infancy. Hope was necessary. 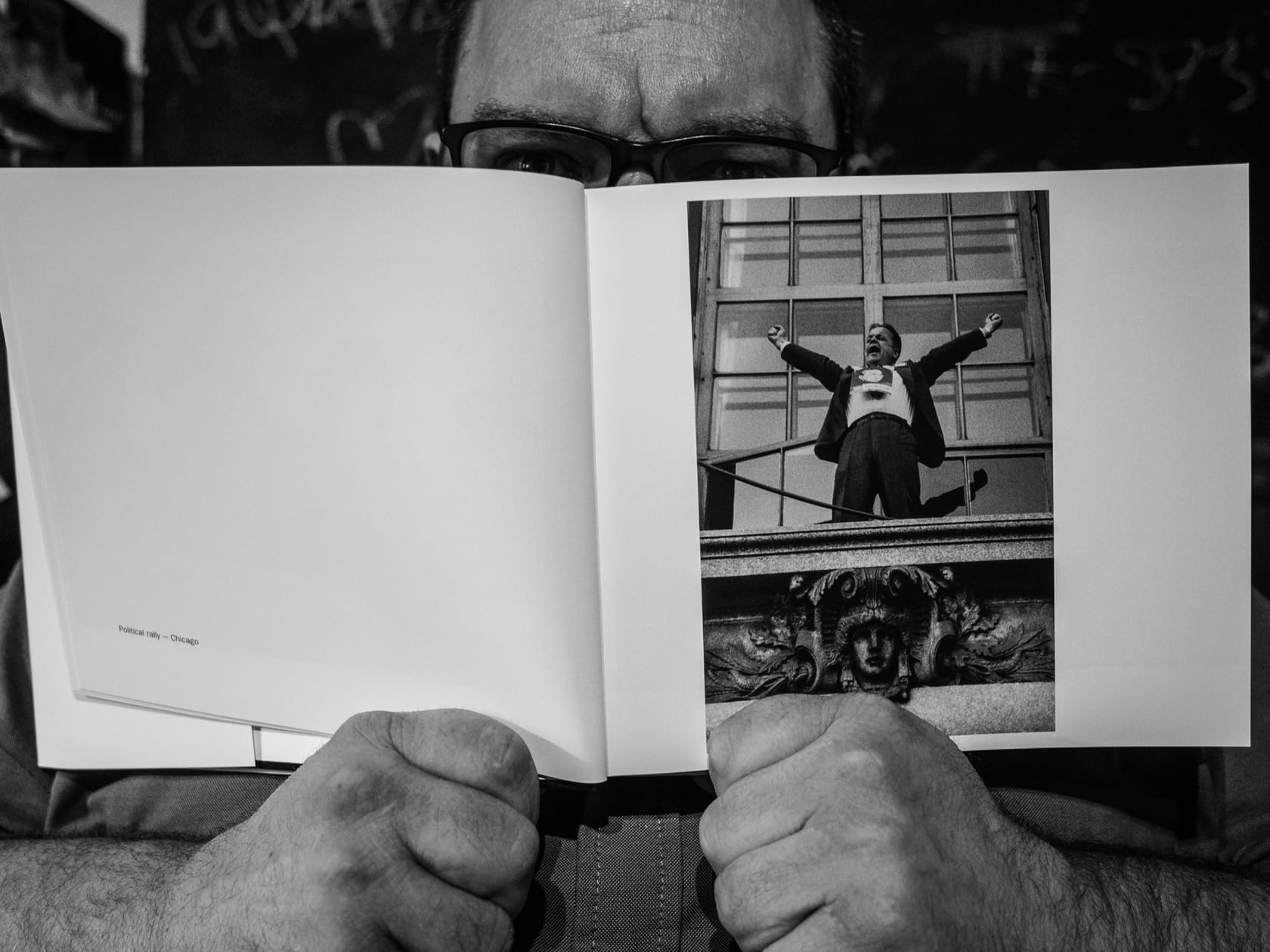 After looking at The Americans several times, I can say it’s an important addition for anyone who appreciates the history of photography or street. When seeing Frank’s candid captures and challenging style for the time, it’s plain to see how he influenced photographers that followed. In these days, where street photography is more popular than ever, Frank’s book is a required history lesson. Not just for photographers, but for anyone who wants to see Americans before they entered the more turbulent 60’s. Frank froze a period which shares some similarities to where the country is now. It may be a book that isn’t revisited often, but it is one that has to be experienced once. It remains important.

Order The Americans on Amazon