This week’s Crit My Pic street photograph was sent in by Don Scott. He has titled the photo ‘Anticipation’. Don’s photo is the first photo we had submitted to us in July when we re-launched the Crit My Pic feature, so congratulations Don for being the first in line since Crit My Pic v.2.0 launched! Many of our readers will already be familiar with the criteria by which I analyse street photos, but for those new to this feature, these criteria are: point of view, focal point, composition, exposure, subject matter and mood. I’m going to look at how I think the photo stands up across these categories, and make any suggestions I can for ways in which it can be improved if possible. If you’d like to have a street photograph of your own analysed, read through the Street Hunters Crit My Pic submission rules and send us an email!

At first glance, the point of view for ‘Anticipation’ doesn’t appear terribly radical, not that there is any problem with that in itself. However, if we look at the photo for a little longer we begin to see we’ve got some intriguing levels in this photo that add extra interest. For instance, the main figure in the shot appears to be sitting on some kind of raised platform, as the ground level where his feet are seems to be a little higher than we would normally expect it to be. When we add the position and height of the wall into the mix, I begin to question my initial judgement – perhaps this shot hasn’t been shot from head height at all, and Don has crouched down a little, or shot from the hip. It’s hard to really tell, but there is certainly more than initially meets the eye. I also like the angled viewpoint off to the left, it’s a nice departure from the norm.

There is little questioning the focal point of ‘Anticipation’. It is quite clearly the man sitting down. He is the only human figure in the frame, and there really isn’t all that much in this shot that challenges him for attention. Quite the opposite in fact, as I will discuss later, several elements of this street photograph serve to emphasise the man clearly as the focal point. My one criticism, or initial feeling at least, about our focal point is that he’s not terribly interesting at first glance. Were it not for the Wayfarer-style sunglasses, the suited man would be fairly forgettable. That’s not always a negative in a street photograph, but it is something worth considering in a shot where there are little other elements adding to the drama of the shot.

I’m impressed by Don’s use of composition in this street photo. He shows an excellent understanding and execution of the power of leading lines in photography. Look at how he has positioned the line of the corner of the wall exactly in the bottom left of the frame. This leads our eyes from the bottom left of the photo diagonally across and up, and when the line of the wall meets the horizontal line of the back wall we are drawn across this line too. With the man positioned in the middle of this line, breaking up the flow of the horizontal, we can’t help but focus on him. As I said, this photographer really understands how to use elements of the built urban environment to his advantage to lead the viewer’s eyes around his photograph!

For ‘Anticipation’, Don has opted for a square crop, which has allowed him to eliminate any potential distracting elements and really get us to focus on his subject matter. A square format also places further emphasis on those important leading lines I mentioned earlier. The rule of thirds grid still remains important in a square format photo, and you can see from the overlaid lines that Don has located the man’s head right at the point where the first third vertical and second third horizontal meet. Excellent! Often the square format lends itself to meticulous symmetry, but I must say I like Don’s treatment here.

I don’t have any particularly comprehensive comments to make about the exposure in ‘Anticipation’. It’s nice that the man’s face is partially obscured by shadow as it adds an extra element of mystery to things, and I like the way his white shirt stands out against the shadowy surroundings of the bench area. The bright white shirt is also a nice link to the bright white wall in the background, so we have a good link between our middle ground and background, which helps us to view the image in depth. This street photo is lacking any kind of really dramatic lighting effects though which is a bit of a pity. We can see a few dappled pools of light spilling onto the top of the wall – imagine if one of these was lighting up the man in a meaningful way! That would really add something to the photo I feel. Perhaps in the absence of powerful lighting it may have been worth exploring this shot in colour. It could have added some missing elements to lift this photo and make it a bit more punchy or dramatic.

When it comes to subject matter we’re seeing something that is not uncommon in street photography – an office worker (though I make an assumption here of course) taking a break outside in the city on a bench. Besuited figures feature regularly in street photos, often because their stomping ground matches that of the street photographer – the urban jungle! However, their ubiquity in street shots means that photos showing them really need to have a lot of drama, a creative twist or special mood to stand out in a very crowded arena. I’m not sure I feel ‘Anticipation’ fulfils this criteria too comprehensively. What makes this subject so particularly interesting? I don’t feel like there is a great deal of mystery surrounding him.

Don has called his photo ‘Anticipation’ and I feel perhaps this reflects the mood of the shot. I notice the man is looking up from his magazine and out of the frame. As the viewers, we have no idea what has broken his concentration and exactly what he is looking at. This does introduce an element of mystery to the photo, and does begin to get us asking questions. Has the man seen someone? Has something happened out of shot? Is he waiting or ‘anticipating’ something? Or has he just read something particularly thought-provoking and is now gazing off into space in contemplation? It’s nice to that a photo makes us ask questions. However, I return to my point above, given our subject matter, are we all that invested in what is happening? Yes, there is an element of mystery, but are we as viewers drawn into it enough by our subject to really want to know more? 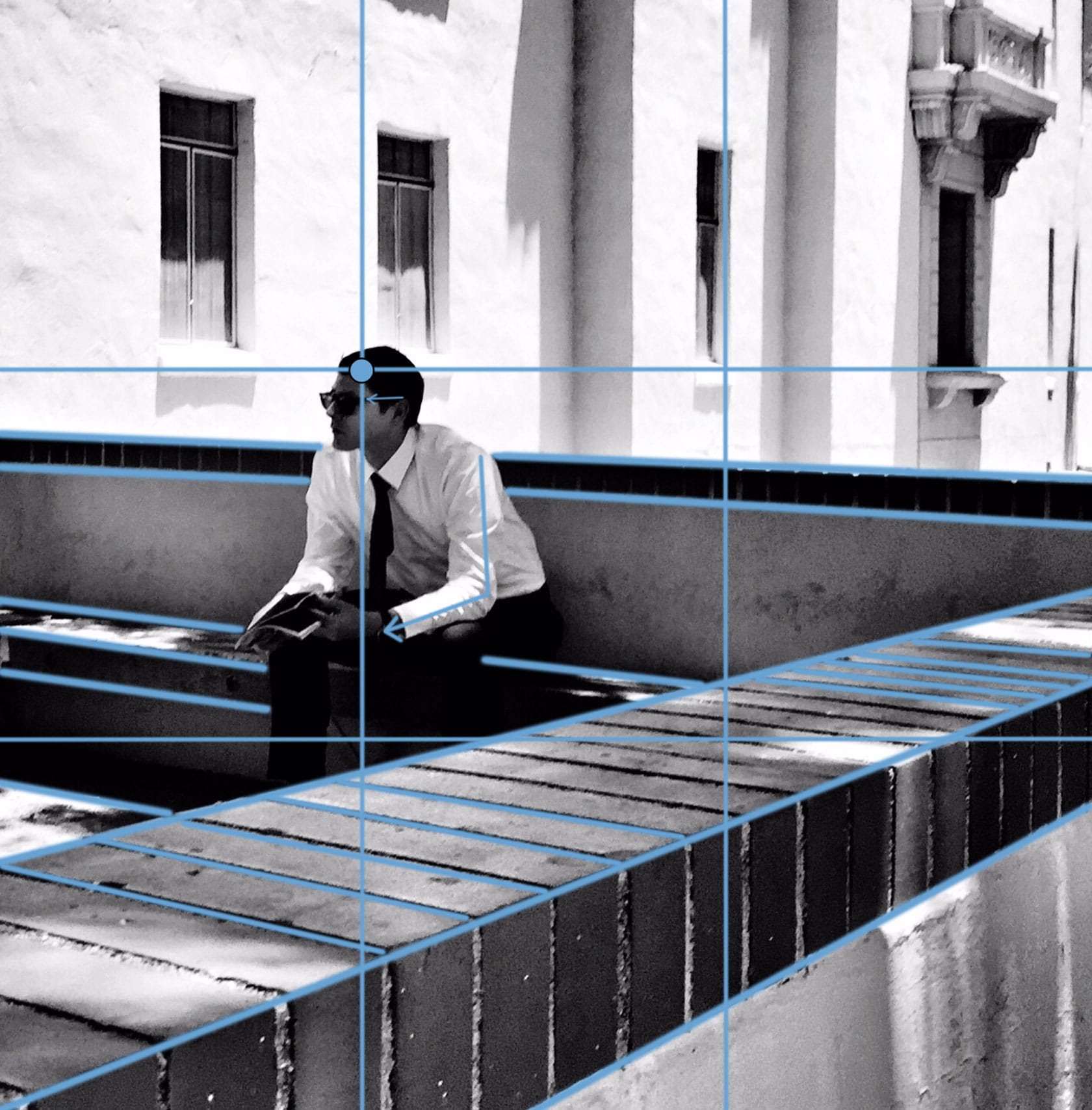 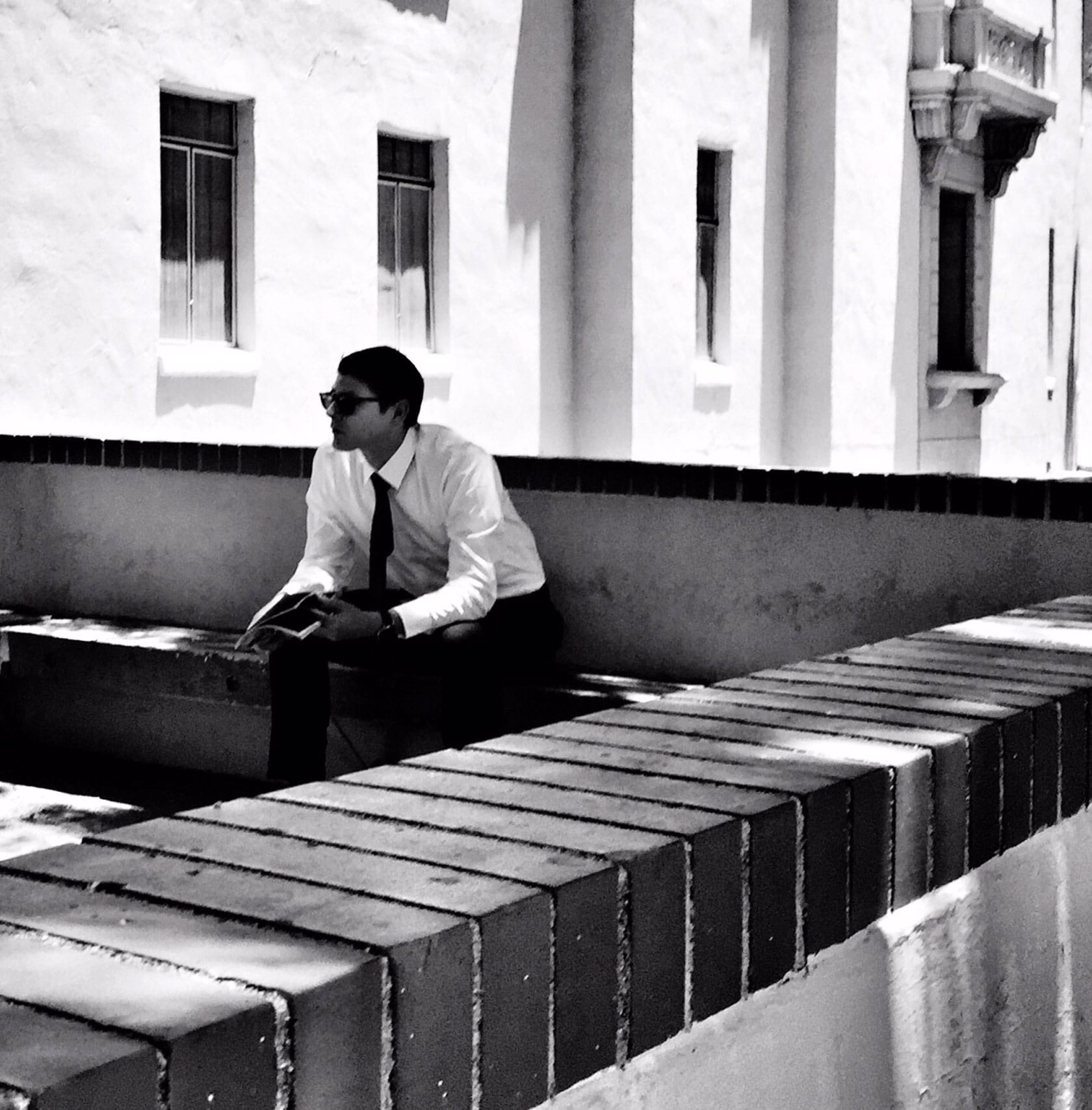 I commend Don for what he’s done with this shot. He’s taken a fairly standard street scene and made it artistic. I am genuinely impressed by how skilfully he’s used leading lines and I think if he shows the same application to these as a compositional feature in other street shots he will be producing some interesting artistic work. He clearly understands exactly how to manipulate a viewer’s eye in order to draw them into a photo, and that is a very important skill. So well done Don! However, I feel in the case of this shot at least, Don needed to focus more on the storytelling aspect of photography. In terms of composition we have a strong street photograph, but is crying out for a more interesting subject. The nature of the beast in street photography is that these subjects aren’t always available, and coming across them is often down to a huge element of luck and timing. Often you have to pound the streets for hours and hours until that interesting subject appears before you, and then you have to be lucky enough for all the elements to come together. I’m confident though that if Don goes in search of the weird and wonderful, he has the compositional skill to craft a shot when something presents himself to him. As the Street Hunters motto goes: “Stay Sharp and Keep Shooting”!