It’s not uncommon these days for street photographers to rally against the practice of over-sharing images on the internet and, to be more specific, social media and its subsequent groups. Granted, the practice has resulted in “photo pollution”, but it also has provided a most interesting point of study. I still have waves of images coming at me on a daily basis via various social media feeds. Some good, many average and some bad. But even though I’m terribly lazy in trimming the fat from my daily intake of photographs shared on social media, it is fascinating when I see the influence the greats of street photography have on photographers of today. The real kick is the “a-ha” moment when I dig into one of my subject’s catalog for the first time and it hits me on how I’ve seen their style replicated in my feeds. This backwards study of influence is not solely married to the internet age, but with the advent of social media, the ease of sharing and the rise of street photography’s popularity, a great photographer’s impact has never been clearer. And, in these eyes, I see the influence of Saul Leiter more and more with each passing day.

Who is Saul Leiter?

Saul Leiter (1923-2013) hasn’t been one of the hallowed names of street photography for that long, when taking the length of his career into consideration. Leiter didn’t really achieve great notoriety until late in life. But this wasn’t because the New Yorker failed at seeking fame. In fact, his modus operandi was unlike many photographers swimming in the social media pool today.

“In order to build a career and to be successful, one has to be determined. One has to be ambitious. I much prefer to drink coffee, listen to music and to paint when I feel like it,” Leiter said. “Maybe I was irresponsible. But part of the pleasure of being alive is that I didn’t take everything as seriously as one should.”

After researching Saul Leiter and his work, I can’t help but to imagine that he would humorously dismiss the influence he has on the images flooding the internet today. Particularly the common technique that captures a subject in, or between, fields of great dark and light that coexist in the frame with swaths of glorious color. This style seems to be everywhere, and it was basically a patented Leiter technique. Leiter had other “tricks” up his sleeve, as well. His use of reflections and silhouettes is often duplicated. Shooting through a wet or steamy window? He was doing it five decades ago. But these techniques, these styles, are not all Leiter is known for.

Saul Leiter was one of the first to shoot New York City street photography in color. Some say he was the first. Regardless, he was a pioneer and went against the grain. When Leiter began shooting color in the late 1940’s, it was a monochrome world when it came to photography. Leiter, who was a painter before he became a photographer was considered part of the New York School, whose famous alumni included Diane Arbus, Richard Avedon, Robert Frank and Weegee. Leiter, like his “classmates” also worked in monochrome. Even though his black and white work was impressive, showing his artistic, painterly style, it would be his work in color that he would be known for several years later. A large amount of his early work is presented in two releases from the publisher Steidl, “Saul Leiter: Early Color(2006)” and “Saul Leiter: Early Black and White(2009)”.

Leiter worked for six decades as a photographer, and somehow remained further under the radar in comparison to his contemporaries. Mostly self-taught, his foray from painting into photography was aided by experimentations in the field with fellow artist Richard Pousette-Park and a friendship with photographer W. Eugene Smith. Leiter then had a series of photographs published in Life magazine and his black and white images were part of an exhibition, “Always the Young Stranger” at the Museum of Modern Art in 1953. Later in the 1950’s, Leiter had fashion work, in color, published in Esquire. He continued working in fashion photography for years being published in Vogue, Elle and in Harper’s Bazaar. Oddly enough, in 1955, Leiter turned down the opportunity to be included in the landmark “Family Of Man” exhibition at MoMa. The show featured  legendary photographers Ansel Adams, Arbus, Avedon, Bill Brandt, Brassai, Robert Doisneau, Elliott Erwitt, Frank, Dorothea Lange, Helen Levitt and George Rodger to name a few. The exhibition toured the world for eight years and was viewed by over nine million people.

Saul Leiter declined to take part because he thought his work was not good enough.

It is easy to speculate on how much earlier in life fame would have found Leiter if he world have participated in “The Family Of Man”. But, as I mentioned previously, fame was of little concern to Leiter.

“I spent a great deal of my life being ignored. I was always very happy that way. Being ignored is a great privilege. That is how I think I learned to see what others do not see and to react to situations differently. I simply looked at the world, not really prepared for anything.”

After the publication of “Early Color”, fame truly came to Leiter. In 2008, he had his first European exhibition at the Foundation Henri Cartier-Bresson in Paris. Numerous exhibitions in Europe and America followed, along with “Early Black and White”. More importantly, “Early Color” yielded a newer and much larger crop of fans. Fans who are also photographers. Sharing images that reflect Leiter’s influence and ensure that his legacy will surely endure.

Whether he likes out or not. 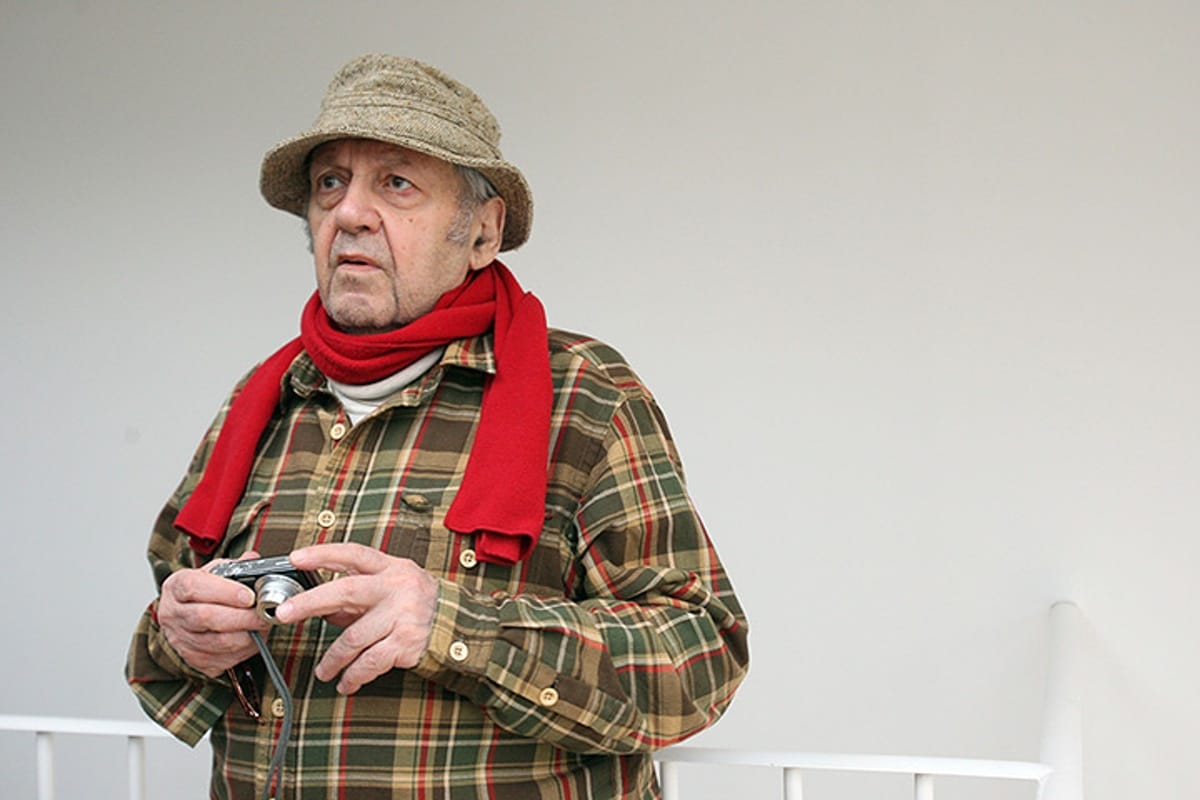 Saul Leiter has given us some of the most beautiful street photography that the genre has ever known. Even though his work in black in white is superb, it is his color images that reflect his painterly sense and allows his style to reach its zenith. His style did not have the hurried, frenetic feel of most street photography. It was closer to fine art. His color photographs are as exceptional as they were groundbreaking for the time. Color seems like it was meant to be for Leiter, and we should be thankful that he decided to break from the monochrome norm and push the boundaries surrounding photography and the ones within his creative self.

In looking at Leiter’s work and reading the bits on his life in general, it is evident that he had no desire in being part of the norm. No want of fame. He didn’t care about acceptance. About sharing over social media. About crooked praise and tepid criticism over the internet. He cared more about seeing than any of that.

“Seeing is a neglected enterprise,” He said. That statement stands stirring and true today. While it may be true that photographers today are capturing Leiter-like images while seeing with Leiter’s eyes, at least they are seeing. The trick is to take your experiences from seeing that way and use it to see for yourself. I’ve found myself guilty of seeing through other’s eyes often. I feel that this is not an uncommon practice. When we see all this fantastic work from these great photographers, it’s an easy thing to do.

When photographers break from the norm, and begin to see and produce work for themselves, that’s the breakthrough moment. It’s at this moment that is the genesis of our individual style. And it must be a glorious moment, I imagine. I say this because I believe that I haven’t experienced it yet for myself. I look through my work and in several instances, I believe it resembles someone else’s. But this shouldn’t be a point of frustration. It should, and always be a the flashpoint of motivation. Motivation to keep learning. To keep pushing. To break through those boundaries. To break the rules. To learn to see for ourselves.

Even though Saul Leiter was incredibly humble and had no taste for notoriety, his gorgeous photographs, born from a rebellious and self-serving method, eventually made him legendary. And that is something I strive for. To be legendary. It’s not about fame in social media or wealth. It’s not about notoriety and recognition. It is, however, about being legendary to myself. Of whom I should be the harshest critic and the biggest fan.