Street Photo of the week by Nick Asaro

Nick Asaro is a Sicilian Street Photographer who is currently based in the picturesque Florence in Italy. Besides loving photography, Nick also likes riding his bicycle and playing the drums. He has had his work published in the 3rd issue of “The Street Photographer Notebook” by Alex Coghe. Nick’s work has also been shared on the UclickVframe website and was a finalist on one of Eyeem’s contests.

We discovered Nick in the ever growing Streethunters.net Flickr group that has become a treasure trove of amazing street shots from all over the world. We are very proud of this group. We recommend you visit it and join it! 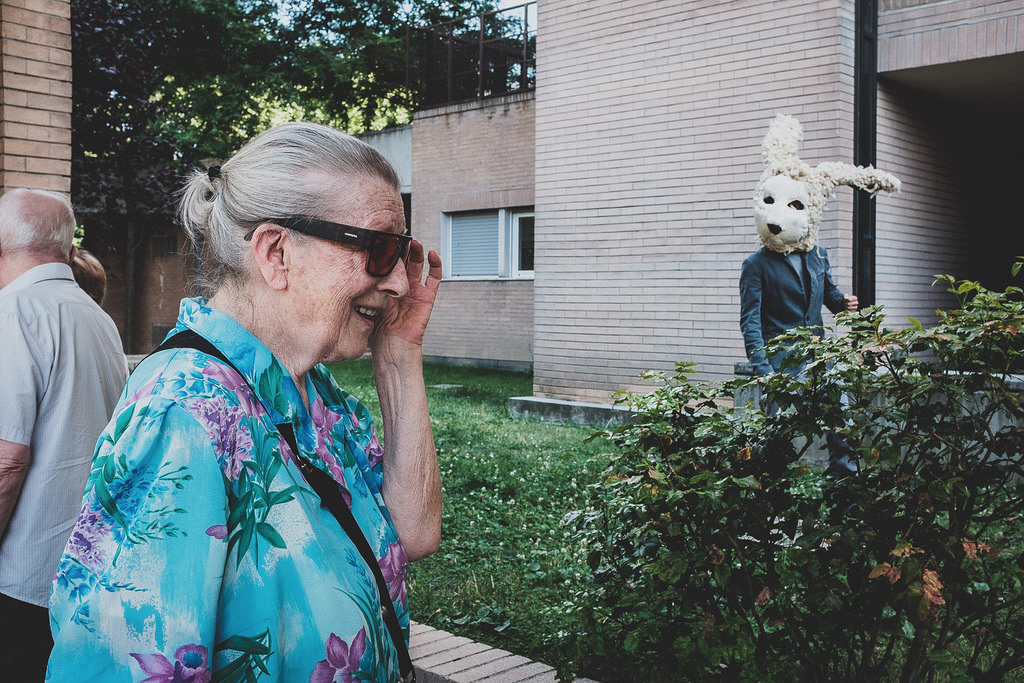 This photo is as surreal as they get. As soon as I saw this photo I was like “ok, so what?! Another sidey of a little old lady…” and a split second later I was like “WTF! Awesome!”

Yes, I didn’t see the surreality of the photograph at first and that made me love it even more once I had. So, what happened when I saw this image?

The focal point is basically the old lady in the bright blue flowery shirt in the front left of the photo. She vividly stands out, dominating the real estate of the shot. The second focal point is the brick wall. Because it takes up a lot of space, it tears the viewer’s eye away from the little old lady and moves the eye to the right. Once on the right of the screen the viewer notices  Rabbit Man. He isn’t noticeable on first glance because he isn’t a dominating figure and he is also further back and behind a bush. But his location is what makes him all the more interesting. When the viewer sees him it feels like a big discovery has been made. A realisation hits the viewer that makes them think “what the hell?”. Without a doubt this is a great surreal shot that is also entertaining. The only thing I would probably do, even though I hate cropping, would be to crop out a little of the left hand side and keep the little old lady and Mr. Rabbit in the photograph only. I understand why Nick chose not to though. This way the lady is in the left vertical of the rule of 3rds. I think the man on the left is a bit of a distraction, but him being there certainly doesn’t impact the shot in that much of a negative way.