Like all investments, investments in photobooks are not without risk. Akin to the financial world, there can be safe investments and risky investments. It comes down to dollars and cents, really. There’s enough work from published photographers out in the webland, where a potential investor can get a pretty good idea of what they’re likely to get when they purchase a photo book. So, considering you’ve done at least a little research, a little homework, the only risk is in how much dough do you want to lay down for a book. Are you getting a good deal? That’s to be determined isn’t it? You can find great books under $40 USD, like Walker Evans’ American Photographs or Ed Templeton’s Wayward Cognitions. When you venture north of $50, a photo book best bring the goods. In both quality and quantity. Good examples here are Josef Koudelka’s ‘Exiles’ or the massive Garry Winogrand catalogue. 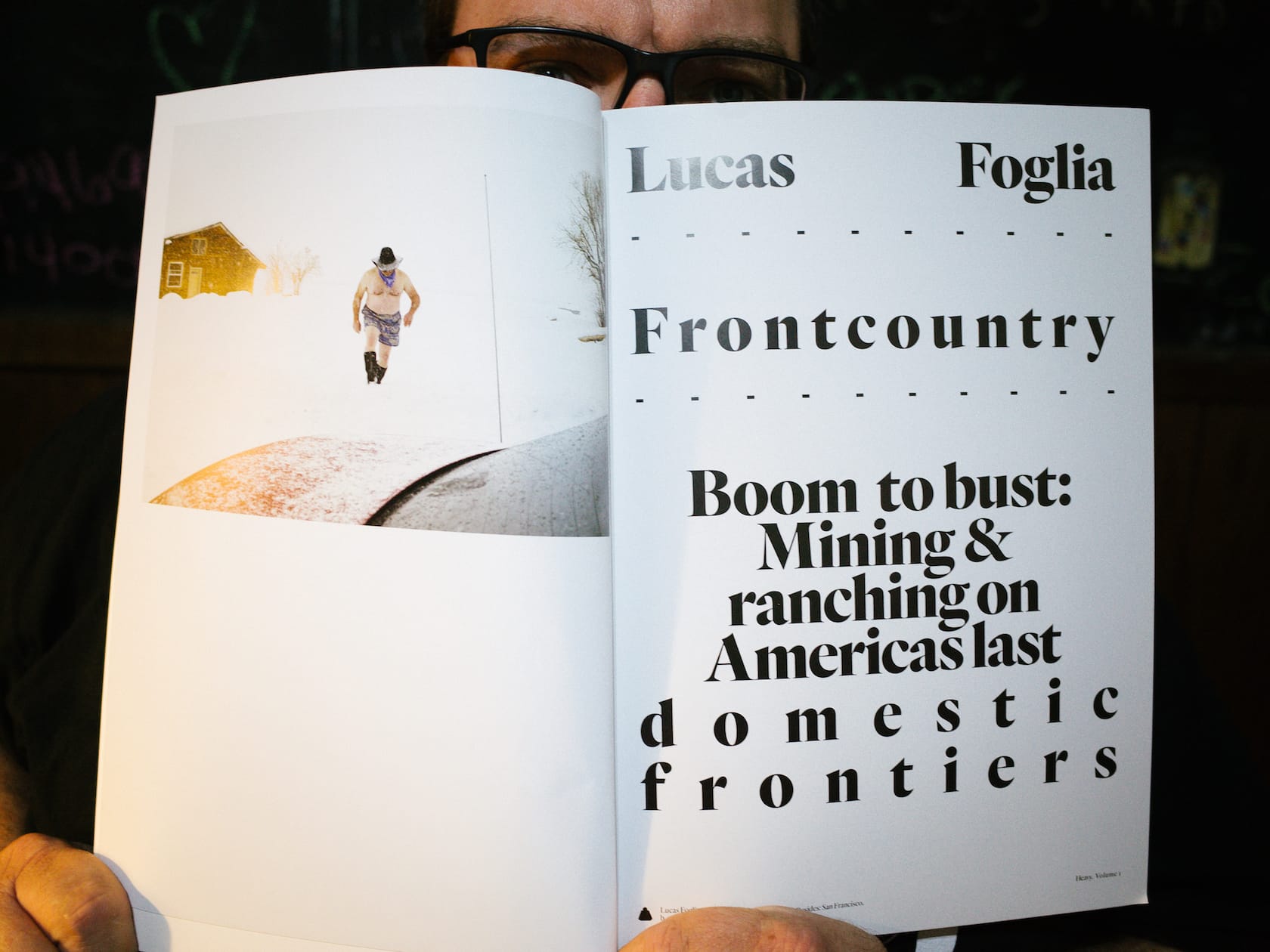 Recently I had the chance to make a real investment in a photobook via a Kickstarter campaign. I was turned onto The Heavy Collective and it’s campaign via the good folks over at Elephant Gun. The goal of the campaign? To move out of their home on tumblr and into their own, brand-spanking new website.

The Heavy Collective, an Australian-based online photography publication, had a glorious tumblr. Truly stunning work. Sometimes gripping documentary and street photography is what I viewed on my initial inspection. It was dangerously easy to get lost for a few hours there. The Kickstarter page told the tale behind the campaign. The four-year old collective had outgrown their tumblr page/account . According to the collective, the coding had become a problem with tumblr updates. Also, the images, at 500 pixels, weren’t done any justice there. “At its core, The Heavy Collective is collaborative, the blog format doesn’t allow us to play with our friends,” it says on the campaign. A new site would provide benefits, most notably being that it would “be able to house more and varied content that doesn’t disappear in the scroll.” 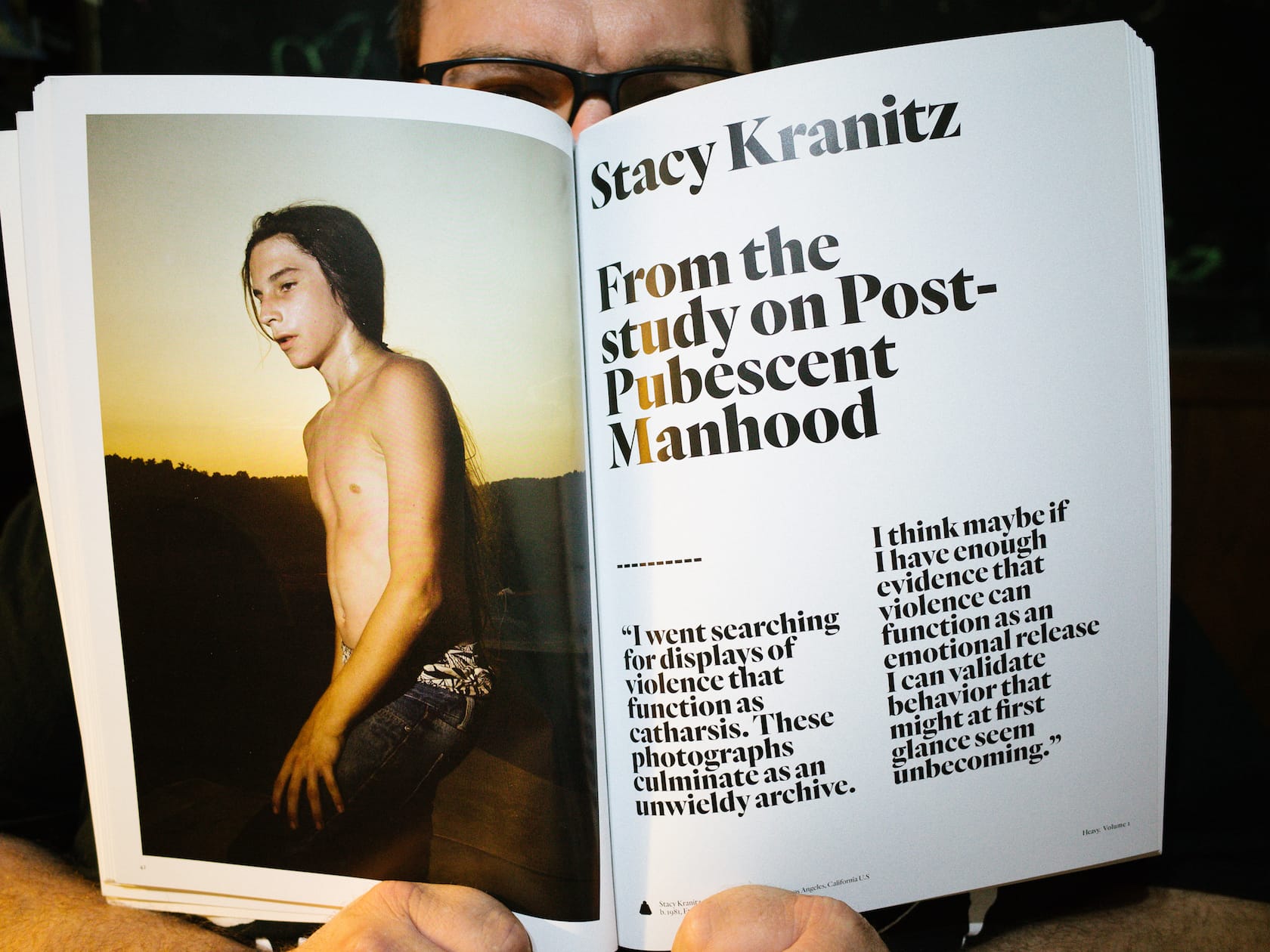 The campaign needed to raise $7000. I looked at the rewards. I knew two things from checking out their tumblr and their Kickstarter campaign page. One, they showcase great work. Two, they are big, big fans of printed work. The Heavy Collective’s founders, Jack Harries and Geordie Cargill also co-run Press Books, Sydney’s first photo book store. So I found a reward at the sweet spot of  $30. For this amount, I would receive a copy of their first annual publication, ‘Heavy Volume One’. I took the plunge early this year and in late March I received notice that the Kickstarter campaign had been funded. The other investment, time, was paid with patience. In October, I was rewarded when Vol. 1 completed its journey across the world and landed in my eager hands.

Heavy, Volume One, was indeed worth the investment. Arriving in a padded mailer, I immediately noticed the postage. $29.70 AUD! This cost the folks at Heavy almost as much to ship as I paid to get in on the action. Once I removed the cargo from the packaging and dug in, I almost felt like I got away with something. Like I pulled off a scam. 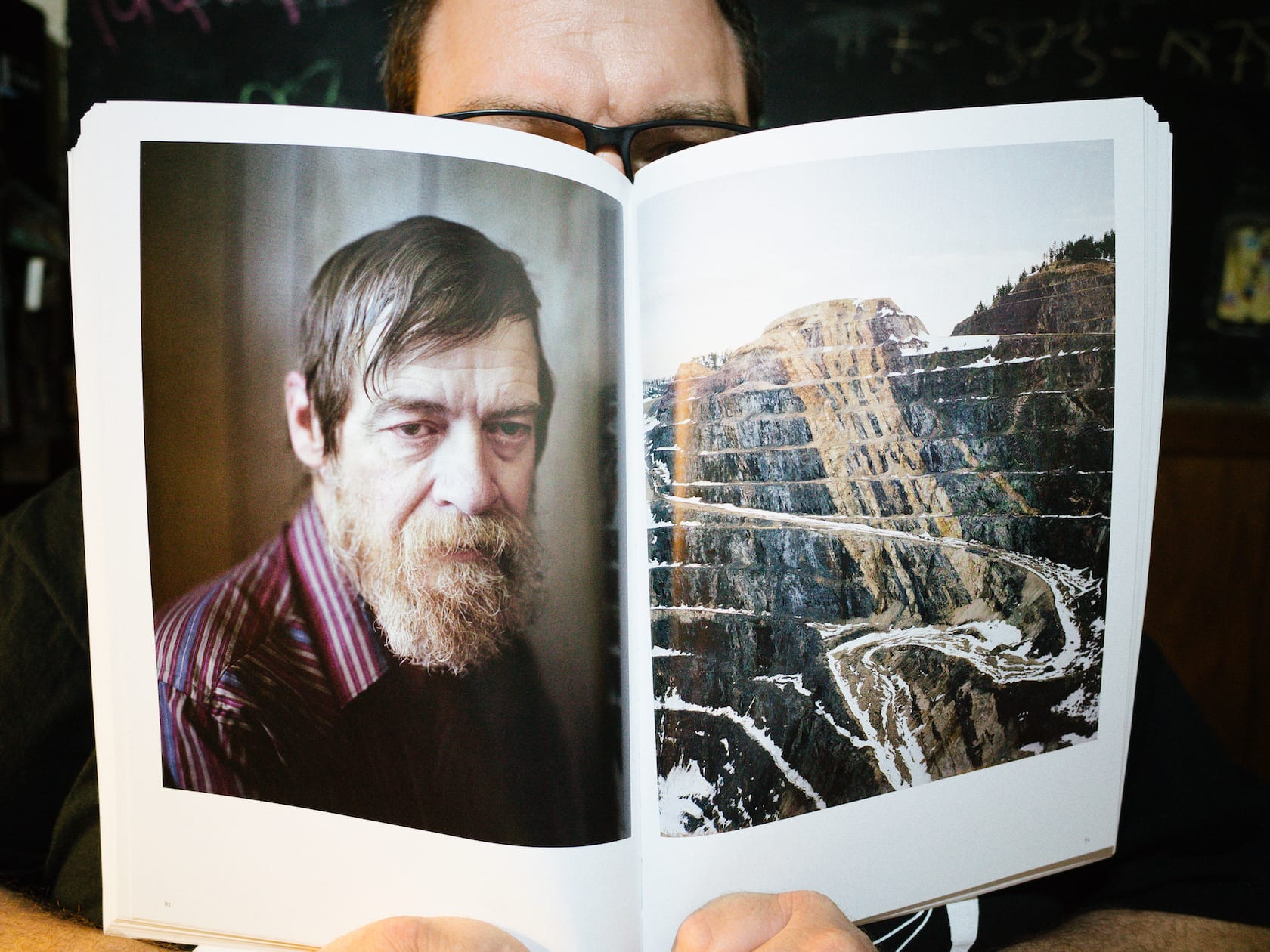 At a beefy 128 pages and 11.8 x 8.3 inches, Volume One initially comes across as a really big magazine because of the soft, linen cover. But make no mistake, this is a book. Far too big to be a “zine”, and ad-free, Volume One has luxurious 157 gsm coated artpaper tucked betwixt the uncoated covers that superbly displays the fantastic work curated for the collective’s maiden voyage into print. Color and monochrome images both look spectacular.

In Volume One, ten photographers are featured. In order of appearance in the book, they are: Lucas Foglia, Zhang Xiao, Tim Page, Stacy Kranitz, Mark Steinmetz, Bryan Schutmaat, Simon Davidson, Emmanuel Angelicas, Kate Peters and Sara Cwynar. While this project comes out of Australia, the roster of incredibly talented shooters are not all Aussies. The U.S., UK, and China are also represented. Each photographer has their own “chapter”, a feature, and deservedly so. They’re all incredibly talented.

Volume One is, to sum it up somewhat brutishly, a collection of features that are predominantly documentary photography. Each one differentiating itself from the others by its subject matter and the photographer’s style. Fogalia sets the tone at the start with his Frontcountry feature. It contains photographs about mining and ranching in the American West that are as big as the sky of the land in which they were shot. Rich in color, but also depicting some magnificently bleak landscapes, Fogalia gives the viewer a distinct feel for the region. 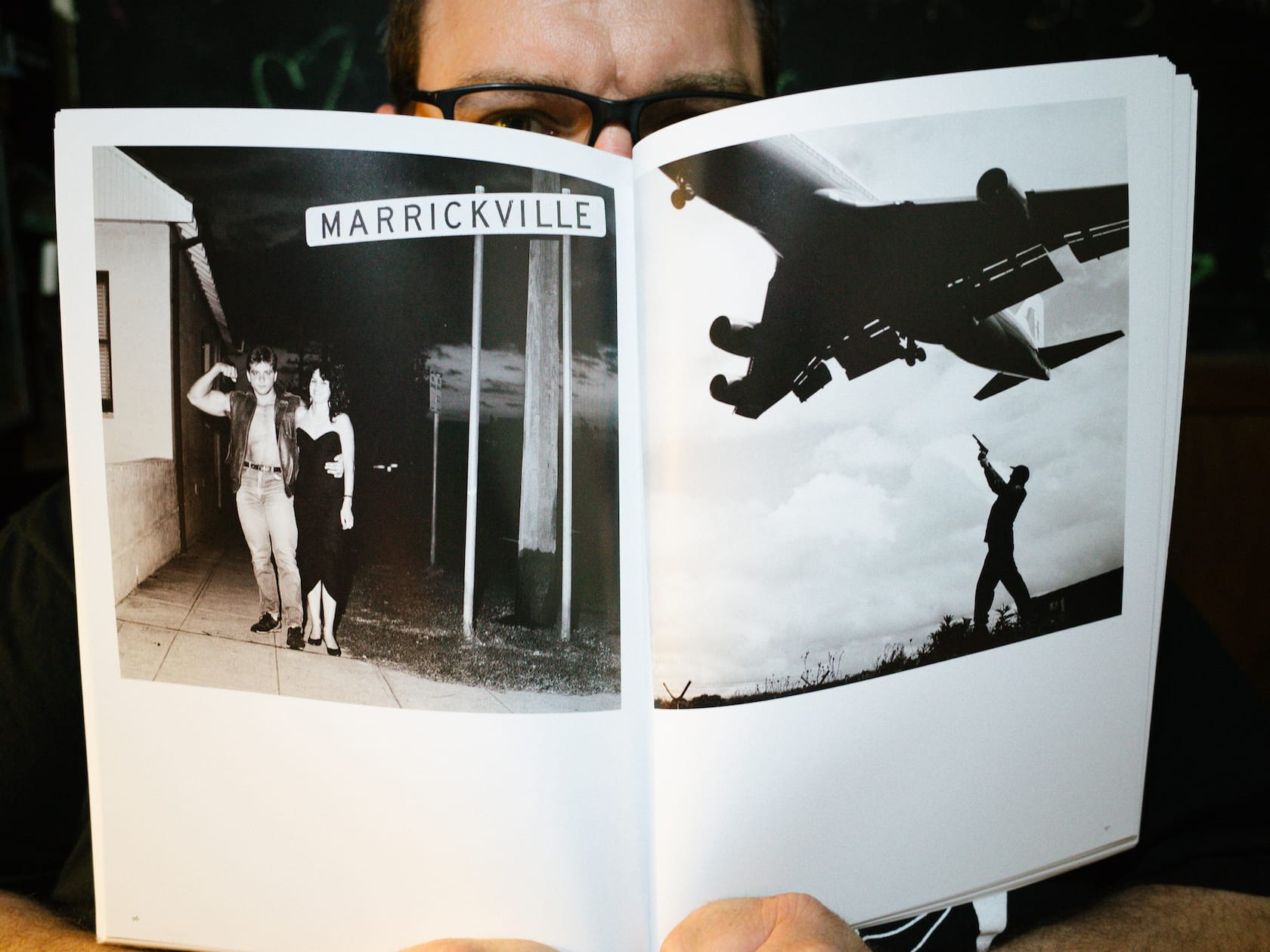 A little further in is Tim Page’s chapter, the most powerful of the lot. Page, an English photographer who’s had numerous books published and a few documentaries made about himself, made his mark photographing the Vietnam war. The feature in Volume One chronicles some of his time spent with the Republic Of Korea’s contingent in the war. The images are gripping and raw. Some may consider them disturbing, but this is war photography. A necessary reminder that it is ugly. But Page also gives us the human side. A lighthearted moment with a soldier and two women working in a rice paddy is mixed in with the more arresting and stark images. The monochrome images are all incredibly impressive and memorable because they are shot by a master.

Another masterful monochrome set comes from Mark Steinmetz. His feature, South Central, shot in the American south, straddles the line between documentary and street. Like the introduction to the feature states, the photographer’s work builds upon the legacies of Walker Evans, Robert Frank and Garry Winogrand. Heavy founder Cargill interviews Steinmetz and it’s inclusion in the feature is most welcome, giving a deeper insight into the photographer.

Showcasing some homegrown talent from Sydney, Emmanuel Angelicas’ Marrickville is yet another monochrome spread that is simply superb. Clever, quirky and at times, sexy, I found Angelicas’ feature to be my favorite. Marrickville is a cocktail consisting of a blend of street, documentary and fine art. It begs to be consumed repeatedly. 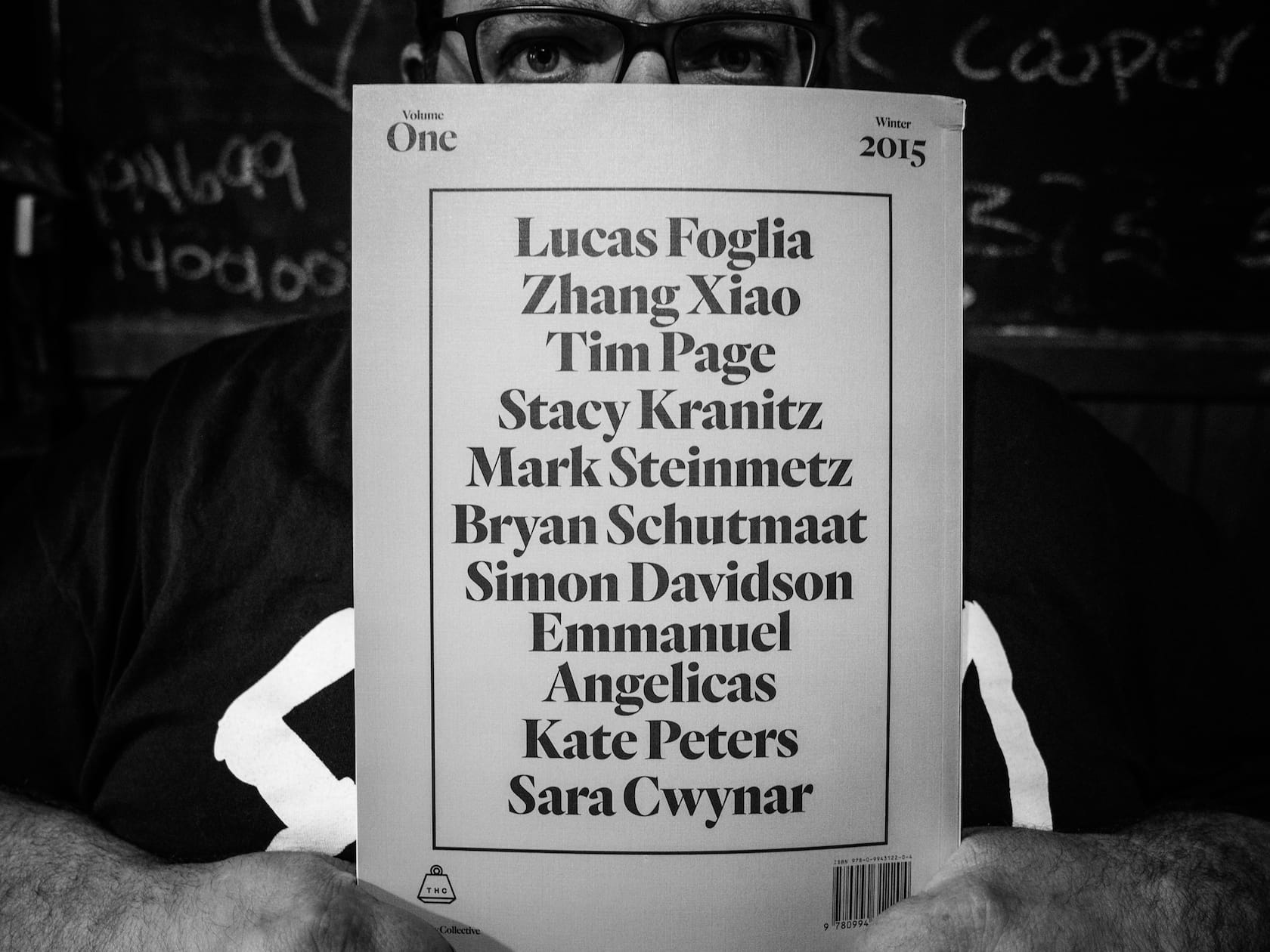 The above mentioned features are just the tip of the Heavy Volume One iceberg, though. Xiao, Kranitz, Schutmaat and Peters all have large, gorgeous color features that make the eyes linger on the page. Bryan Schutmaat’s ‘Grays the Mountain Sends’ contains some exquisite portraiture. Stacy Kranitz’s ‘From The study on Post-Pubescent Manhood’ showcases a few deliciously raw images that are as intense as they are smashing.

To say that I was pleased with this Kickstarter investment is an understatement. Overjoyed would be more accurate. Though not thoroughly street photography, this collection is indeed inspiring. Shamefully, I must also admit to a feeling of pride in helping to fund a righteous project. But that’s just the sprinkles on top of the ice cream. The Heavy Collective has delivered the goods with Heavy Volume One and it appears they’re settling into their new digs at theheavycollective.com. The site is still spotlighting exceptional. The great news is that Heavy Volume One is available there now. And for a relatively small investment, you can get in on the action and reap your own reward.