This week for Crit My Pic I’m going to be looking at a street photo by Phil Barnard. This photo was sent into us by Phil during the time when Crit My Pic was on a break, so as such it doesn’t have a title. This is the penultimate photo submission we had when Crit My Pic was off-air, so I’m now at a stage where I’ve almost got up-to-date. Thanks for your patience everyone! As per usual, the street photo submitted by Phil will be analysed over the categories of point of view, focal point, composition, exposure, subject matter and mood. I’ll describe my reactions to the photo based on how it performs in these criteria, and I’ll make any suggestions I can for ways in which I think it can be improved. If you have a street photograph of your own that you’d like me to ‘Crit’, take a look at the submission rules at the bottom of the page and then get it touch with us!

Phil’s point of view for this photo is one we are quite familiar with. We’re looking across a street from a fairly standard height, over at a pavement and a flat wall. It’s a wide to medium viewpoint showing a man and also his wider surroundings. This point of view is very much archetypal of a street scene, and feels almost like something you’d see from a window across the street. A wide view allows lots of scope for creative use of composition, and opportunity to play with the relationship between the focal point and the background to achieve a pleasing composition. This type of side on shot is one which is very regularly seen in street photography, but that isn’t always a criticism – when combined creatively it can make for some pleasing effects.

Our focal point in this shot is incredibly clear, and Phil should be commended for that. He has used composition and in particular a strong awareness of the power of ‘less is more’ and the effectiveness of minimalism to emphasise his focal point. That focal point is of course, the man walking in front of the wall and across the frame from left to right. The man is the only figure in the entire frame, and quite clearly disrupts the monotony of the relatively featureless brick wall behind him. His position close to the first third of the ‘rule of thirds’ grid helps to emphasise this, and he is also close to the golden section area (marked by the circle). Phil has used his background and composition very effectively to clearly identify his focal point.

As I have mentioned above, Phil has demonstrated a good compositional awareness in setting up this shot. He clearly timed his release of the shutter to coincide with his subject’s relative position in the frame, placing him around the one third line as I have said. This served to unbalance the image and in turn make it more visually distinctive. It also plays on the movement theme we have going on in the photo. Our subject is moving from left to right, a direction which lends itself to being associated with movement in many people’s minds because of the direction of writing (in the Western hemisphere at least). So having the focal point of the image moving across the frame in this way helps to emphasise the feeling of movement in the shot, especially as there is a large area of negative space occupying two thirds of the right side of the frame for him to walk into. Another element of this shot which brought some nice dynamism to the photo was the movement of the man’s arm, which swings around in an arc from his right side to the left side of his head.

My alternative suggestion for treatment of composition in this shot would have been to play on the stark minimalism and graphical elements already present in the photo and take them a step further. We could have perhaps seen the windows used differently in their role in breaking up the wall as the background. They could have played a more active role in the photo if they were placed symmetrically in relation to the frame. Then we could have seen the man dead centre in the frame, mid stride and walking between the space between the two windows. This would have strengthened the minimalist and graphical themes in the shot. We may have lost an element of dynamism and movement, but we would have gained a triangular compositional element right at the centre of the frame with the interplay between the two windows higher up and the man between them walking along the pavement.

Exposure plays a significant role in Phil’s photo, and I’m pleased say he has used it effectively. We have some nice strong direct sunlight coming from the top right of the frame and striking the man’s head. This illuminates his face brightly and really serves to emphasise him as a focal point. This effect is further enhanced by the fact that the man is raising his hand to shield his face from the sun (the sweeping motion I described above). The light and exposure choice by Phil also serves to play another role in the photo. Not only do we get some pleasing shadow tones falling across the brickwork, but we also get some great shadow shapes created too. On the right of the frame there is the weird rhomboid shadow cast by part of a building or something, but the most interesting shadow is that on the left of the shot. Underneath the window we have the shadow cast by the man. Because of the position of the sun, the direction of the light, and the wall behind, this shadow has become elongated and distorted to the point where it becomes just a weird deformation of the man himself. His shadow is then linked to him by the shadow from his leg which becomes just a thin strip across the pavement. In terms of improvements to this area of the shot I can think of only two things. The first would be to wait for an even more powerful and lower sun to cast lower, stronger shadows (though this may not of course have been possible where Phil shot his photo). I would also have liked to see this photo in colour I think. I think even with muted hues it could have been a very interesting photo with the strong sunlight, and very dramatic indeed if the man was wearing any brightly coloured clothing.

I feel that Phil’s subject matter is something we see very often in street photography. A side on view of person walking in from of a wall is kind of de rigueur for a street photographer’s portfolio. That isn’t necessarily a bad thing, but I do feel Phil could do more here to make his shot memorable and stand out from the crowd. As I mentioned above when I talked about composition, I think this shot could do with some different framing in order to play on the graphical strengths of the elements in the photo. I think if we had some truly precise layout and framing – centralised and symmetrical window placement in the frame, and the man below them, we could have had a shot which was pleasingly balanced and had a more methodically crafted feel. This would have given it a clearer identity as a work of truly artfully and precisely composed minimalism.

I like the mood and emotions conveyed by this photo. The wideness of the shot and the use of graphical minimalism produces a sense of detachment. The fact that the man is the only person in the frame and that he appears quite small in relation to his background creates a feeling of solitude in the photo. The man seems very isolated and alone. When you add the effect of lighting and exposure into the mix, the mood of the photo develops further. The man’s weird distorted shadow appears almost sinister as it looms up behind him, like it’s crawling up from the cracks in the pavement. Alternatively, the shadow cast by the man’s leg that links him to the rest of his warped shadow is puts me in mind of Jekyll and Hyde – like the man and his monstrous alter ego. This adds a nice bit of subtext and extra drama to the image. 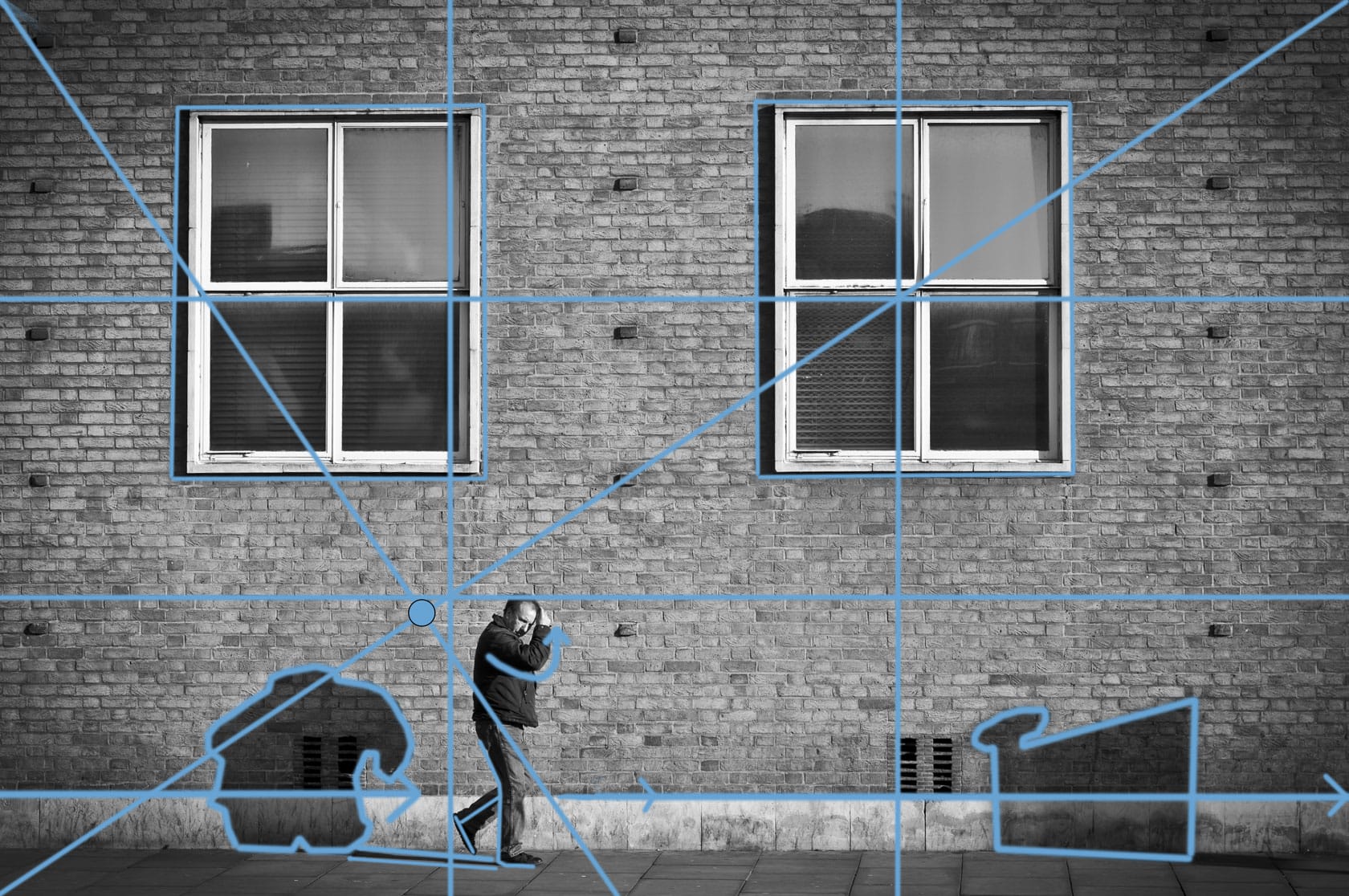 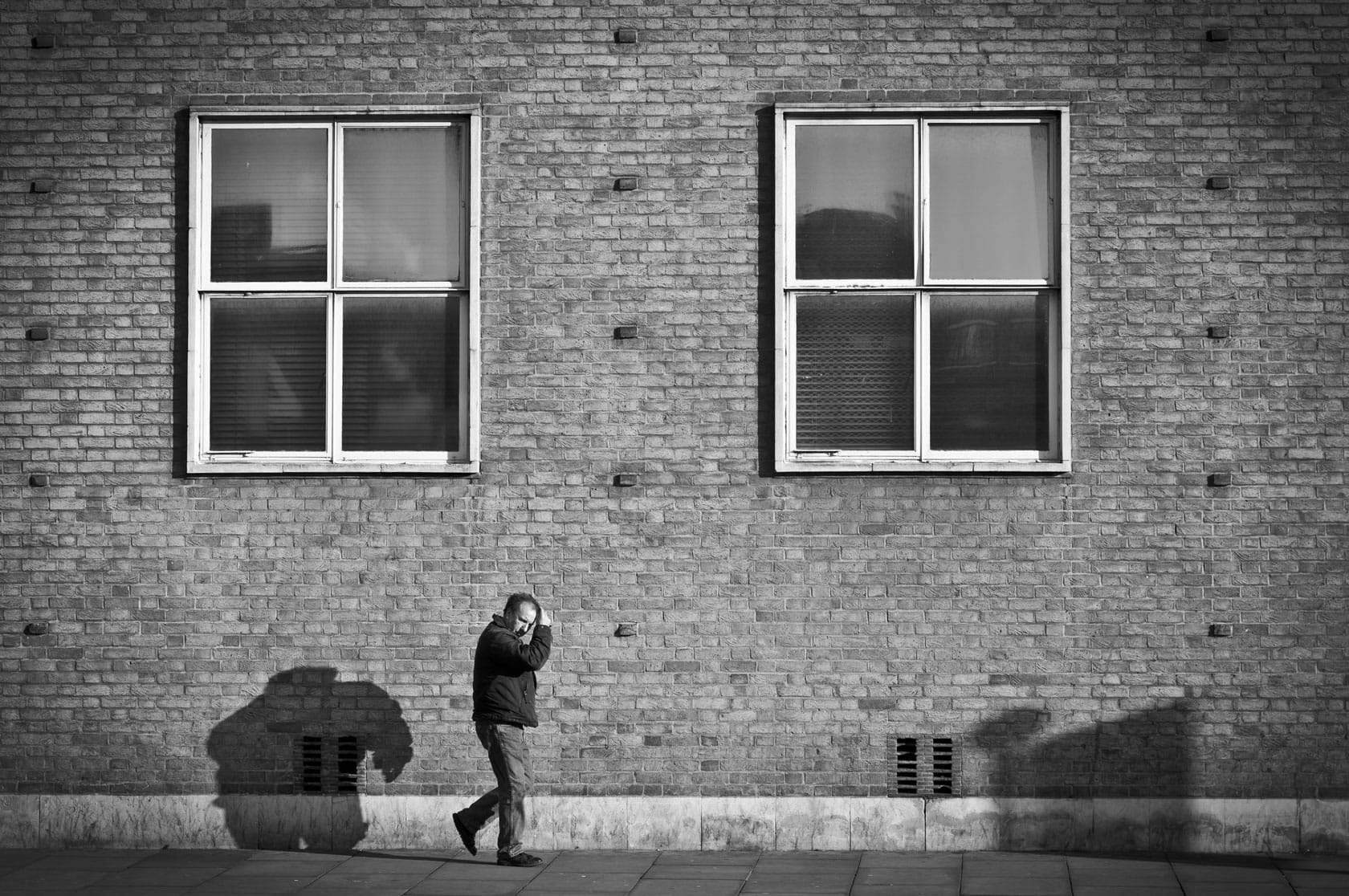 I like this shot, but I think Phil needs to build on this concept in order to make it more interesting and memorable. We see many side-on wide shots of people walking in front of walls. Producing a really distinctive photo like this requires even more effort in terms of composition and execution to make a photo like this stand out amongst the flood of similar shots. If Phil wanted to build on this theme and style of photography, he should perhaps take a look at some expert minimalist photographers like Harry Callahan, Hiroshi Sugimoto or Richard Misrach and study how they compose so precisely and set up their shots. Then he can wait for his street subject to enter the scene and he will have his own street photography take on minimalism! As things stand, I like the elements we have going on in this photo – especially the light, exposure, and mood created by the shadows – but I think it needs more development to become a memorable and great street photograph. Thanks for submitting Phil!