Maciej Dakowicz. The name, for this only English-speaking and not so well traveled Yank, doesn’t exactly roll of the tongue. But it doesn’t need to. On his website,www.maciejdakowicz.com, Dakowicz breaks down how to pronounce his first name. Especially helpful for this slow-witted brute. But Dakowicz realizes that some of us are beyond help and writes, “If this is too difficult then just call me ‘Magic’.” And that name is indeed appropriate. Because capturing magic on the street is what Dakowicz excels at.

Maciej Dakowicz, born 1976 in Poland, is a member of the iN-PUBLiC street photography collective. According to his bio on the collective’s site, he bought his first camera in 2000 while working in Hong Kong. The passion for photography took him over and he was hooked. After traveling extensively, he moved to Wales in 2004 to study for his PhD and to work at university. In 2009, he became a professional photographer, leaving the academic world. However, in 2010, he did complete his PhD. But Dakowicz‘s  photography work during that time is what started him on a path to being a street legend.

Over the course of five years, Maciej Dakowicz shot on Saturday nights in Cardiff. It is an exploration of the drunken excess, revelry and chaos found around St. Mary Street in the city. But really, it could be a study of any liquored-up partying in any city. However, Dakowicz puts us behind his lens, his eyes, in this particular area and into the frenziness. Kissing, fighting, flesh and blood. Revelers on the streets and in the streets, on their feet and in their backs. The images Dakowicz captured were compiled into a book, “Cardiff After Dark”, published by Thames and Hudson in 2012.

Maciej Dakowicz, whose work is wonderfully sharp and colorful, is not just a one-trick pony. He’s a superb documentary and feature photographer as well. A visit to his site reveals a beautiful and strong stash of images. A set of images featuring garbage pickers at the Stung Meanchey Municipal Waste Dump in southern Phnom Penh is equally horrifying and heartwarming. Vivid pictures of families dwelling in makeshift huts, making a living digging through the streaming, smoking waste are evidence that Dakowicz had established a connection and truly got his feet dirty with the often smiling people there.

Even more powerful and gripping are images Dakowicz captured in the aftermath of the earthquake in Kathmandu on April 25 of this year. Dakowicz was there at the time it happened and shot his first image a mere 35 minutes after the earthquake, the ground still shaking from the tremors. The images are harrowing and Dakowicz’s skill in sharpness and color ratchet up the intensity. A truly compelling set of images.

Needless to say, Dakowicz gets around. A current resident of Bangkok, Dakowicz delivers work from all over the globe. His site features absolutely gorgeous sets of street and travel photography from Yangon, Mumbai, Istanbul, Kolkata and Varanasi. The images from India, in particular, are jaw-dropping in their vividness and practically beg the viewer to visit and see it for themselves.

Dakowicz has also been featured in the books “Street Photography Now” and “The World Atlas of Street Photography”, and in numerous magazines and newspapers. A winner of multiple awards, Dakowicz also offers street and travel photo workshops in India and Asia. 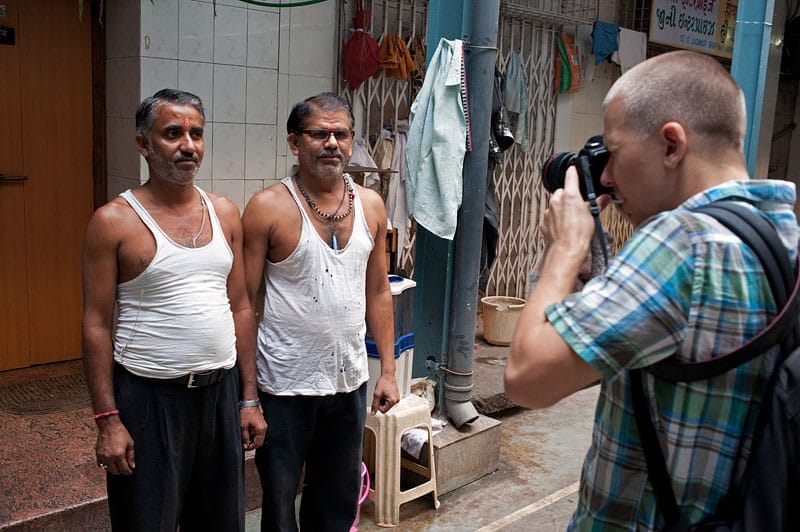 Maciej Dakowicz’s quality of work is stellar. The sharpness. The composition. The color. His skill is inspiring, for sure. And the masterfully captured images from places truly a world away inspire me to travel. To not just see them for myself, but to capture them through my lens. They make me realize that I have so, so much more to see and do. And that I need to get on that. Quickly. But Dakowicz, with his candid street photography in Cardiff and all over the world, provides a more practical, and affordable, influence than say, world travel.

In an interview at japancamerahunter.com back in 2013, Dakowicz noted the popularity of street photography and the growing number of people trying it. That was two years ago, and it’s safe to assume the genre has blown up amongst photographers to an even bigger degree. He then touched on the not-so-bright spots of street photography’s growth.

“There are quite a few people writing articles or even books about it knowing little about the genre. Unfortunately they gather a lot of praise and attention from amateur photographers and enthusiasts, who are later inspired by these poor examples. A photo taken on the street is not automatically a street photograph, it needs a twist. Some people don’t get it. So I hope they learn and start talking about proper street photography. Or maybe even start doing it.”

Important to take from this is, “a photo taken on the street is not automatically a street photograph, it needs a twist.” Currently sites, feeds and groups are clogged with photographs that are taken on the street, not street photographs. There’s a dearth of “twists”. Take a look around and it’s plain to see, there’s a lot of boring photographs from the “street”. There’s a lack of wit. A lack of clever. Clever use of light. Clever use of background. In general, a lack of clever use of the photographer’s eye in finding the “twist”. I know, because I’m guilty of it.

For example, a candid shot of a subject captured at close range isn’t good enough just because it’s close. If there’s no “angle” to the shot, no “twist” explored, it doesn’t cut it. Otherwise it’s a snapshot of a person or people on the street.

Dakowicz explains the “twist” on his website, saying “… the definition can be refined easily to define proper street photography by adding just one word – “a twist”. A little twist – something clever, funny, unexpected, surprising or ambiguous. Something making you scratch your head, putting a smile on your face or making you say “nice”.” Simple? Yes. But, it’s something that’s easy to lose sight of in this quantity over quality social media world in which many street photographers dwell.

It’s important for me to remember it’s not about “keeping up with the Joneses” when it comes to street photography. It’s about taking good street photographs, not just photographs out on the street. To keep looking for the “twists”. And that the twists aren’t just witty. They’re more than just expressions and situations. They can be found beyond the subject, in a background. They can be serious and blur that line between photojournalism and street. It can be the beauty in a face. It can be the detail in a pattern or the pull and draw of leading lines. It can be the struggle between shadow and light.

The message I get from Dakowicz is that I need to keep looking for the twists. Don’t rush. Look. One shot with a great twist is better than a million without one.