The Crit My Pic this week is Kenrick Tan’s street photo “Anonymous”. Kenrick originally sent a photo into us for review while Crit My Pic was off the air, and he’s been biding his time for a review since then. I’ve almost finished working my way through the past submissions we had, so thank you for your patience Kenrick! As is the norm, I’ll be reviewing Kenrick’s street photo across the categories of point of view, composition, colour/exposure, subject matter and mood. I’ll also be making my suggestions for any ways I think the photo could be improved in order to make it more visually appealing. If you’d like your street photograph to be critiqued by me have a look at the submission rules at the bottom of the page and drop us an email!

We have a fairly standard point of view for this photo, in that it seems to have been shot from around standard head height. This ‘standard’ or ‘default’ point of view in a street photo isn’t always a bad thing, although it can feel a bit repetitive and become limiting if overused – an unusual point of view can really spice things up sometimes. However, Kenrick hasn’t suffered that problem at all with “Anonymous”, as the relationship between his point of view and his subject and background in the photo is interesting. Because Kenrick has shot his photo from underneath a bridge or in an underpass, street level is actually on the horizon line in the photo, which is not something we are all that used to seeing. As Kenrick is standing on a sloping ramp, with his subject walking down towards him from street level, his subject’s feet actually come just below the horizon line. So we have lots of different levels going on in this photo, which helps to keep things interesting.

I was really pleased to see a very obvious and clear focal point in “Anonymous”. Kenrick has used composition (more on that later) and exposure very effectively and skilfully in this photo to place emphasis on the man as the single focal point. The man’s role as the focal point is further underlined by the fact that he is very much the only person in the whole frame – one man surrounded by a sea of concrete, steel and bricks – so there is little doubt he is what we should be focusing on.

Kenrick’s composition in ‘Anonymous’ is really impressive. He has used leading lines masterfully to focus the viewer’s eye in on exactly where he wants them to look – in this case the walking man. As you can see from the lines I’ve added to the photo, literally all lines lead the the man! The curve of the wall sweeps up from the first third of the rule of thirds line to meet the line of the metal railing which actually dissects the man. The support wall and the railing also point up from the middle of the bottom of the frame to the dead centre of the photo, where the tiny piece of curved railing on the column in the middle also loops towards the man. Mirrored at the top centre of the frame is the sweep of the roof, also leading down and into the middle of the frame. This effect is further emphasised by the line of the lights in the roof structure, which form their own version of a leading line. As you can see from my annotations, “Anonymous” is basically a sea of leading lines all drawing our eyes towards the subject. Excellent job Kenrick!

I also like the negative space effects we have going on in “Anonymous”. In the left of the frame we have some nice vertical lines that dominate the first third of the image, creating an area of negative space that encourages the viewer to move across to the right of the frame where the ‘action’ is. The darkened roof at the top of the frame plays a similar negative space role, as does the area of shadow on the right – all of them focusing the eye in on the man walking on the path.

If I wanted to really nit pick I might say that had Kenrick waited half a second longer we could have had the figure positioned more on the second rule of thirds line and closer to the golden ratio area, but I’m hard pressed to honestly say that I feel it would improve the image. With all the strong geometric lines in the photo it walks a very fine line between busy and overcrowded, but it is a line it walks completely successfully and manages to remain both visually intriguing and focused at the same time.

I’ve chosen to combine the colour and exposure criteria in this instance, as they are very closely linked in this particular photo, and actually complement one another. Through his location, lighting, and perhaps a bit of processing and white balance selection, Kenrick has managed to deliver us colour photo which actually feels like a black and white shot. There are some beautiful tones of grey and blue in this photo that make this photo charismatically ‘street’ and that’s something I really like. In fact the only areas in the whole photo where we have any hues that aren’t found in the cool segment of the colour spectrum are the roof lights and the minuscule band of skin we can see illuminated on the man’s face. These little flashes of warmth provide a great contrast in the shot, and I particularly like that our man as the main focal point features just a fraction of a hue that sets him apart from the rest of the scene.

Kenrick’s choice of location was always going to lead to an interesting lighting and exposure effect, and “Anonymous” hasn’t left us disappointed. I love how natural light spills in from behind Kenrick at the front of the frame and illuminates the start of the curve of wall, which becomes shrouded in shadow as it sweeps into the underpass. The natural light from the background illuminates the back portion of the frame, creating a nice block of light in the centre of the frame that fades away in the middle. This backlighting of course leaves the walking man in shadow, save for the tiny sliver of light that falls across his face. He also has a slight halo around him which is a nice touch. Kenrick has essentially exposed for the mid tones of the highlights in this photo, and the result is a masterful exposure that is the perfect mix of light and dark – well done Kenrick! I’m struggling to think of how this could have been improved – perhaps more lighting on the man’s face – but there would have been no way to achieve this naturally and I’m really splitting hairs here!

As our focal point is so clear, so in turn is our subject matter. We are seeing a solitary man walk out of the light and into the darkened underpass. While solidarity silhouetted figures walking are de rigueur in street photos, Kenrick’s interesting composition and location manages to keep this shot from straying into the cliche, which is most welcome.

I like the mood of “Anonymous”. I feels very much like an archetypal street photograph without being boring. The way the man is walking out of the safety of the daylight and into the darkened underpass lends the shot a bit of drama. I also like the way the light spilling into the background of the photo has taken on an almost ethereal misty appearance, which adds a nice bit of mystery to things, as does the fact we can’t really see the man’s face at all. The mix of vertical, horizontal and sweeping leading lines and the brilliant mix of tones gives “Anonymous” a great three-dimensional feel, helping to place the viewer in the scene and making the mood even more immediate and emotive. 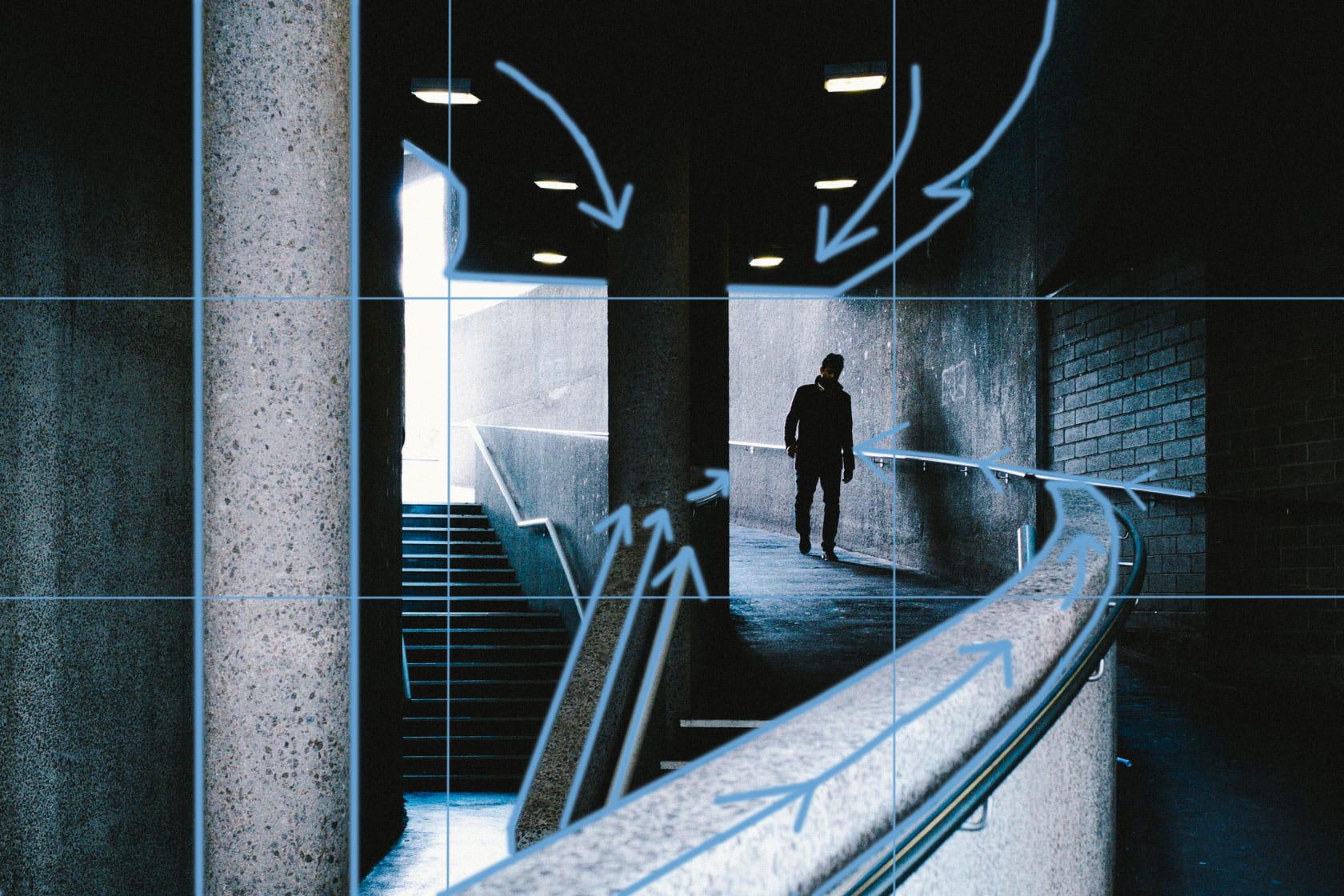 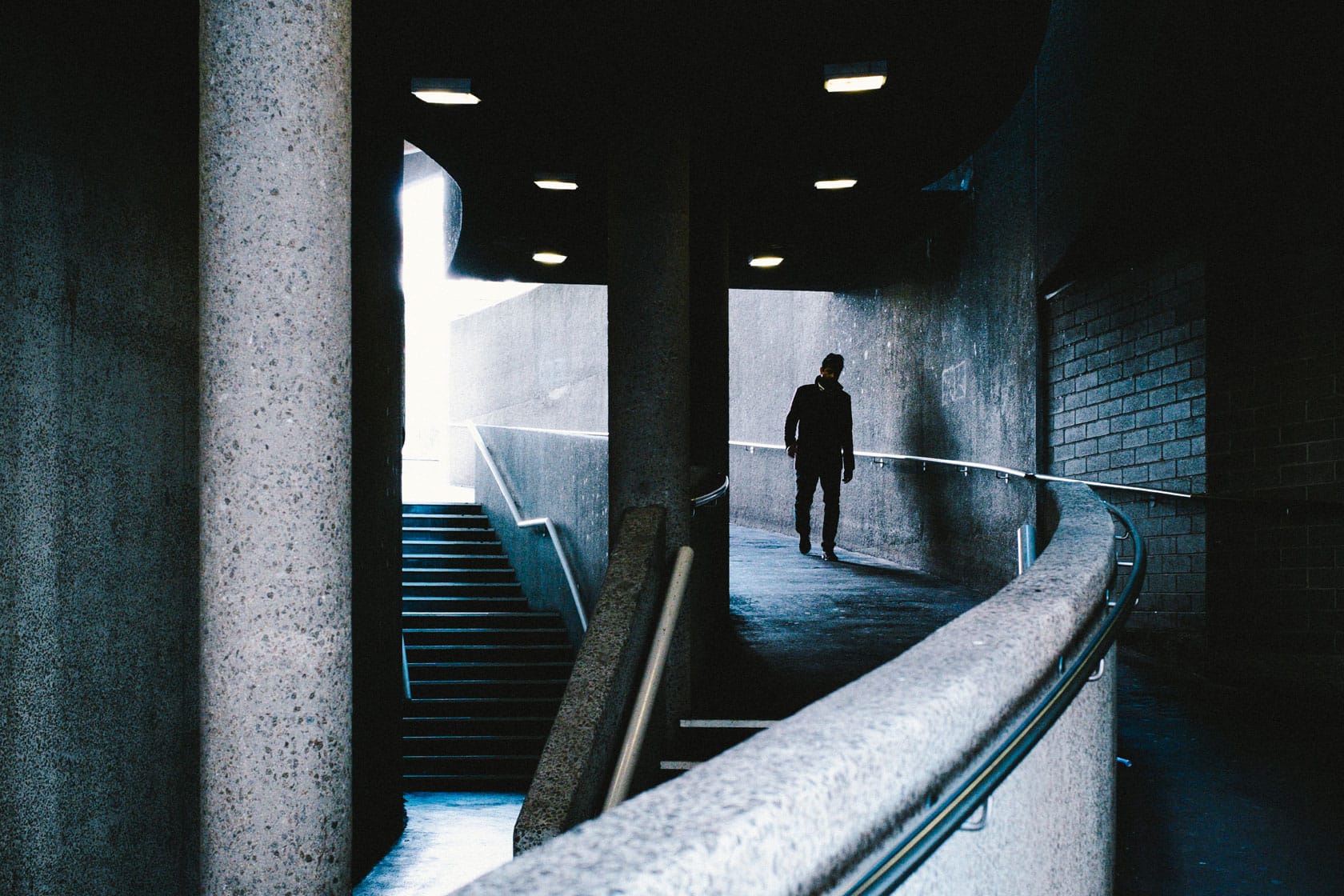 I was impressed by Kenrick Tan’s photo “Anonymous”. I think it has all the ingredients of a good street photo. It seems clear to me that Kenrick scouted and chose this location carefully, with its interesting mix of leading lines and lighting effects, and then waited for his subject to appear. This shows a great deal of compositional skill, awareness and planning. His use of leading lines in this photo is truly excellent, and his balance of exposure, highlights and shadows perfect. I struggle to make any genuinely helpful suggestions to improve this shot without sounding like I’m being picky. I might say that a more interesting subject than the oft-seen ‘solidarity walking man’ might make for a more weird and wonderful shot – perhaps a surreal subject like someone in a weird outfit or fancy dress? Perhaps a brightly coloured outfit might add even more drama? Or someone with a big bush of hair that would very dramatic when backlit? As you can see, I’m clutching at straws at bit! Kenrick has produced a very impressive photo here, and I’d like to see him continue to develop his use of leading lines in other works. Well done Kenrick, and thanks for submitting your photo!