Antonio Toledo’s street photo ‘The Corner’ is my focus for Crit My Pic this week. As with the other Crit My Pic posts of late, I’m still working my way through the submissions that came through while Crit My Pic was off-air – so apologies for the delay Antonio, I’m catching up! Regular readers will be familiar with the criteria by which I analyse a street photograph, but for new readers these are: point of view, composition, exposure, subject matter and mood. I will also make some suggestions for ways I think the photo can be improved. If you’d like me to ‘crit’ your street photo check out the submission rules at the bottom of the page and get emailing!

Antonio has shot this photo from what I’d say the say is the ‘standard’ or ‘default’ point of view for street photography – that is, around the head height of an average person. As his subject is sitting down, it means the whole frame of the image is pointing towards the ground too, so we feel like we’re looking down at the subject as Antonio was. This standard point of view is good in terms of allowing us to easily imagine ourselves walking down the street and seeing this scene, however it does leave the image a little lacking in drama. Perspective changes dramatically with point of view, and I feel this shot could have been much punchier had it been shot from a lower angle. A lower angle would have changed the appearance of the guitar player to give him more impact in the shot, whilst at the same time emphasising more the fact that he’s sitting on the pavement, which is something I feel is of interest and needs to be accentuated.

Antonio has done well to give us a very clear and obvious focal point in this shot. There is no question that the guitar player is what holds our attention in this photo. He is the single figure visible in the whole shot, and significantly he is the only ‘organic’ subject in the photo. The rest of the photo is made up of mainly artificial geometric lines which stand out in sharp contrast to the hunched and twisted figure of the guitar player.

Intricately linked to Antonio’s distinct focal point in this photo is his use of composition. Perhaps the most obvious of the compositional devices employed by Antonio in ‘The Corner’ is his use of negative space. The relative blankness of the walls creates a sea of negative space across the whole frame, encouraging the viewer to seek out the busker as he breaks the monotony of the walls. As I looked closer at the photo, I began to notice how Antonio had used the guitar case cleverly as a leading line to also draw our eyes to the musician. As you can see from the arrows I’ve drawn, the body of the guitar tapering into the neck focuses our eyes to hone in on the musician, as well as adding a story and context to the photo – the guitar case makes it clear he is a musician before we have even seen his guitar.

From the rule of thirds grid and the golden ratio guidelines and point (the ringed circle) you can see that Antonio has sited the busker’s head just below the point of the golden ratio and on a one thirds line – this helps to make for a more visually attractive and interesting composition. The fact it is the musician’s head positioned at this point is important – our eyes are more naturally drawn to faces as they are our primary communication source with others – so we are more likely to seek them out in a photo. I found it particularly interesting when I started to look at the guitar more closely, I like how the neck crosses the man’s body and the fret board ends at the side of his head with the tuning pegs sitting at the golden ratio point close to the man’s head. So what we have here is both of the man and the object that defines him (guitar) positioned right in the area of the image where they can be most effective in making the shot visually pleasing.

Antonio has chosen to shoot this photo in black and white, which means his choice of exposure and the light and shadow tones across the image are designed to provide the shot with additional interest. I’m pleased to say that the exposure Antonio has used has been effective in doing this. I like the way the face of the wall on the right is lit, with the light gradually falling off as we round the corner and see the musician sitting there. By the time we reach the left edge of the frame shadows dominate. I particularly like the way the musician is emerging from the shadows, as I feel it lends the shot more mystery and drama. The way the lighting falls across him also makes him stand out against the wall – which as with the methods described above, helps to make him stand out further. Another nice feature of exposure Antonio has used is how the skin tones on the musician have been rendered. His hands appear stark white, standing out dramatically. Contorted as they are around the guitar’s neck and strings they appear almost skeletal, and help to lend the shot a much needed sense of dynamism which is otherwise lacking. These hands are in fact the only indication we have that the guitar is being played which gives the image more of a ‘story’ and allows us to place ourselves more in the scene. While the lighting isn’t terribly strong or super dramatic, I do like the effect it has on the shot. I’d perhaps like to see it tweaked ever so slightly – I’d be interested to see the effect with slightly darker shadows and the overall exposure perhaps lessened by a third of a stop or more to add even more mystery to the image.

We’ve got a pretty clear subject matter in “The Corner”. This shot is all about the lonesome artist – the solitary musician playing his guitar on the pavement. This is the archetypal image of artistic creativity that we are all familiar with – it’s cliche, but that’s what makes it powerful! In fact there are elements of this image that remind me of the sort of photo you would see on an album cover. That sense is heightened by the musician’s sunglasses and the way he seems to be making eye contact with Antonio’s lens – he appears almost diva-like and as though he is performing for the camera.

I feel that the mood of the shot is quite closely linked to our ‘artist’ as the subject matter. There is certainly an element of the surreal here, with the mysterious lonesome musician sitting in the shadows. I feel that the presence of the mirrored sunglasses really adds to this feeling, and I particularly like how it makes the musician appear bug-eyed. Not being able to see his eyes makes him all the more mysterious, particularly as we are given to looking to a person’s eyes naturally as they are how we communicate. 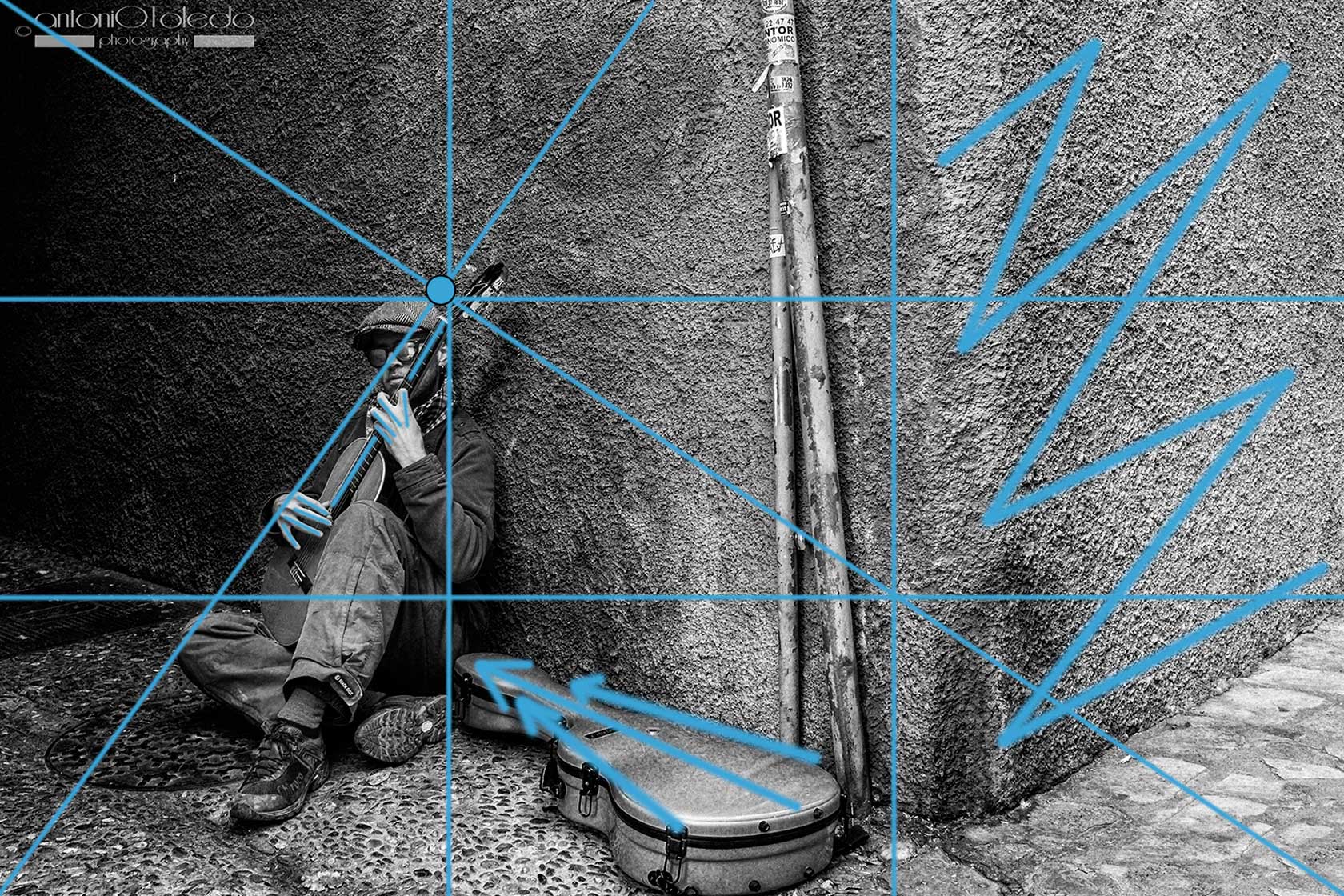 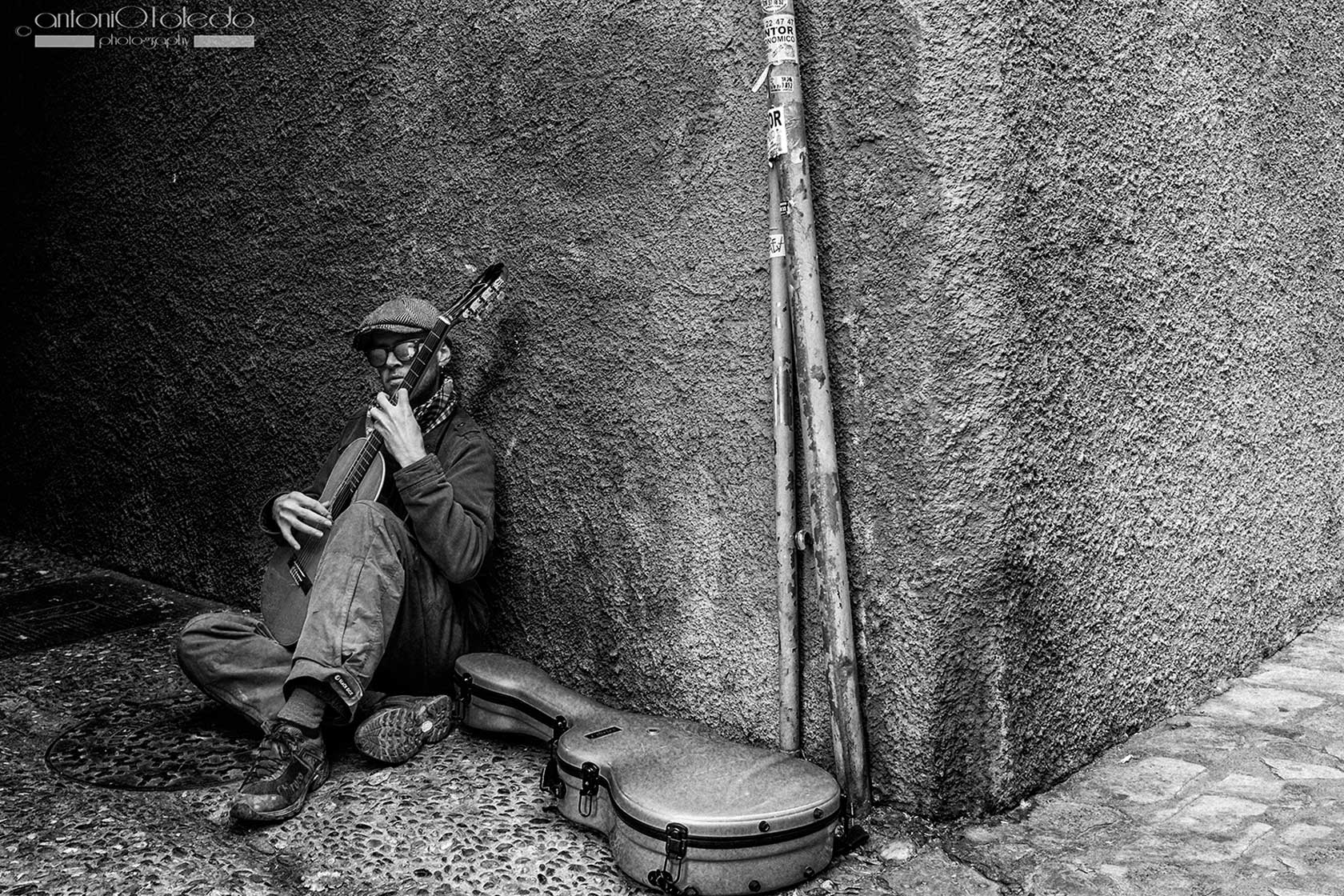 While I do like several elements, particularly the clear focal point, the subject matter, and the slightly surreal and mysterious mood, I feel that “The Corner” is slightly lacking in something to really make it stand out from the crowd. It comes across as ever so slightly plain without a true ‘punch’ or wow factor. I do feel that perhaps there is more that could have been done with this subject matter and theme. Buskers and musicians are a regular subject for street photos, and while I can see what Antonio has done with the corner of the building I feel he could have done more to further develop his subject matter. I wonder if an interesting treatment of this subject would have been shooting the musician from a low angle and getting in closer for more dramatic effect. Or perhaps alternatively going for a minimal geometric photo by shooting the musician from low down and facing the wall head on so the wall appeared as a flat plane. That would have preserved our image of the musician as a solitary figure with the wall as an area of negative space. Another option could be to take a shot of the musician from directly above – I’d like to have see how the combination of that cap, sunglasses and his hands on the guitar looked like from above for a really surreal bird’s eye viewpoint. As it is, what we have in ‘The Corner’ is an interesting theme in our mysterious solitary musician, but ultimately a photo that isn’t quite truly memorable.