I think the best thing about street photography is that it is unpredictable. When you head out onto the streets with your camera in your hand (or round your neck) you never know what will happen. You might be confronted with the most amazing street scene you’ve ever seen within moments of stepping out of your door and be able to start snapping away, or you might pound the streets for hours and not see a single thing or make a single photo. I know the latter is more often than not the case for me! Even if you don’t manage to get any photos, street photography is great because it gets you out there, in amongst it all, surrounded by and witnessing humanity and life in its many varied forms on the streets. If you choose to make street photography your vocation you are able to see and experience things that you just wouldn’t otherwise come across sat at home online or watching tv.

The moment I shot this photo was one of those instances I’ve just been describing above. It was a Saturday night in Rethymno, and Spyros Papaspyropoulos and I had been out on a street hunt, enjoying some beers and practicing some off-camera flash street photography. The centre of Rethymno old town is pretty interesting on a Saturday evening, and we’d already walked past an impromptu live lute performance outside a taverna in the street, when we stumbled across something even more unexpected. There is a large building next to Rethymno’s Old Town Square that is used for all sorts of weird and wonderful public cultural events – from art exhibitions to archaeology lectures to displays of traditional weaving. As we walked past the building at 3AM on Saturday night/Sunday morning we were amazed to see that it was still a hive of activity, with lots of people chatting outside. A poster display outside the door told us there was an open tango dance session being held, so we decided to take a closer look.

The scene inside was one of the most bizarre and surreal things I’ve seen in a long time, and will live long in my memory. It was a dark room filled with couples doing the tango, dancing to a tune played by a live band. The couples twirled in time to the music, lit only by a few red and blue spot lights. Across one wall of the room sat single women and men waiting patiently in a line to be asked to dance, reminiscent of a scene from a bygone age of the ‘50s or earlier. Behind them on the wall was a bizarre mosaic of several women’s faces – the significance of which I don’t fully comprehend! The room was so dark, and so eerily peaceful that it wasn’t the place to start galavanting around with a flash, so I opened my lens up to its widest aperture and cranked my ISO right up to 25,600 in order to get enough light into the camera for a decent exposure. I wanted a shot of the people waiting in a line seated at the wall with a couple dancing in the foreground for context, with the weird mosaic in the background. I have to admit that the placing of the arm as if it extends from the mosaic woman is a lucky coincidence, but a happy one. After I’d fired off a few shots, the music came to an end, and the couples broke from their embrace, and drifted off into the night like strangers. 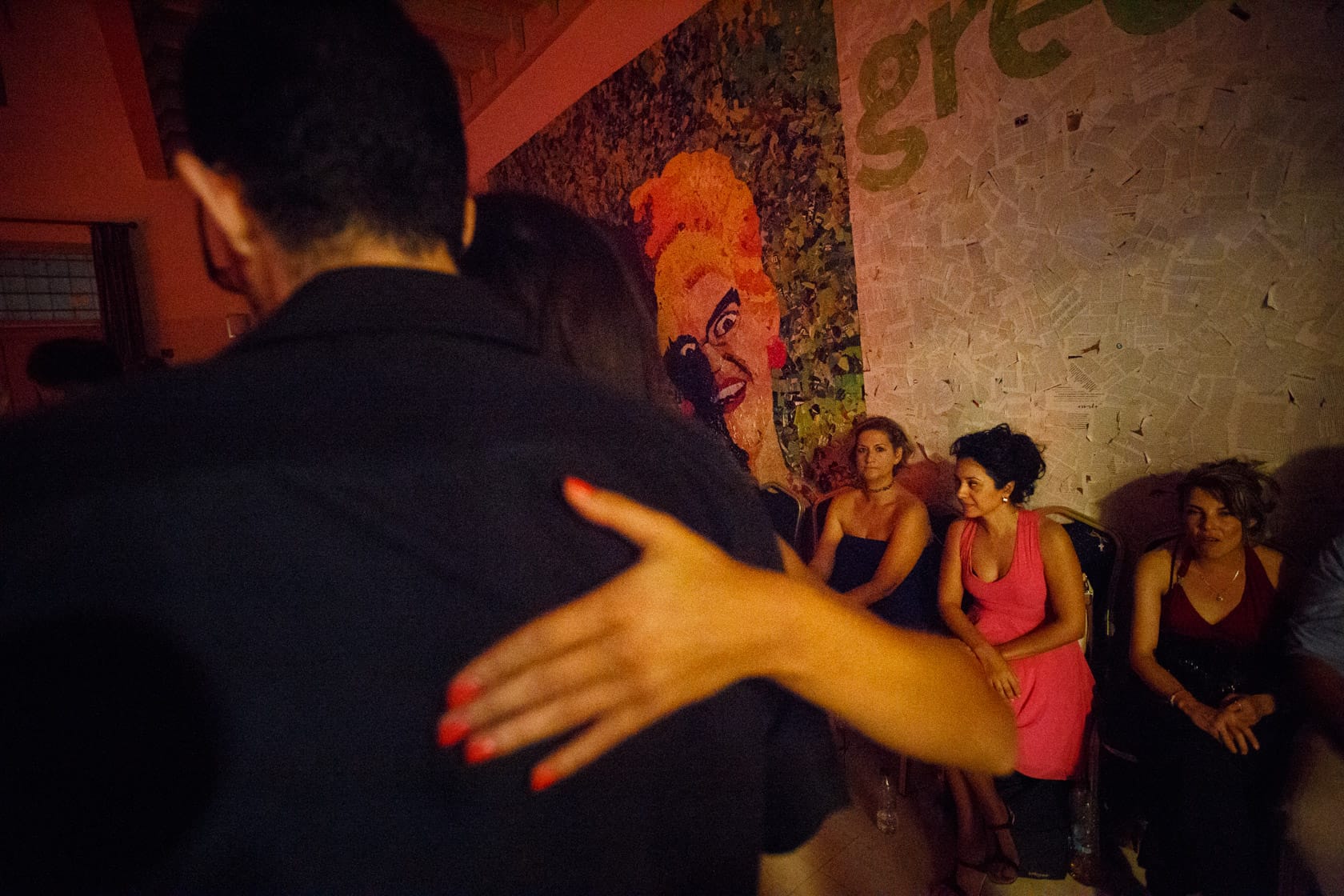