Street Photo of the week by Jon Luvelli

Jon Luvelli is a Street Photographer from Missouri, USA. He aims to capture emotion through his work and to send messages to his viewers through his photography. Luvelli has been commissioned by Universal, Warner Brothers, and Nike, among others for his art.

Jon Luvelli mostly shoots in black and white and emphasises composition, perspective, contrast, and chooses his photographic subjects that are mostly unique and extremely interesting. As he himself mentions:

“I see all things in black and white. The human eye moves around at a rapid rate when seeing color, therefore whenever I shoot black and white I know what I want people to see, so I shoot for that story.”

He is a person that absorbs experiences, images and knowledge and uses them to better express himself through his photographic work. He is inspired by his subjects, the way they look, their behaviours and their interactions as well as the way the light plays in every scene that unfolds in front of his eyes.

You can see more of Jon Luvelli’s photographic work on his website at http://www.jonluvelli.com or on his Facebook page at Facebook.com/jonluvelli. 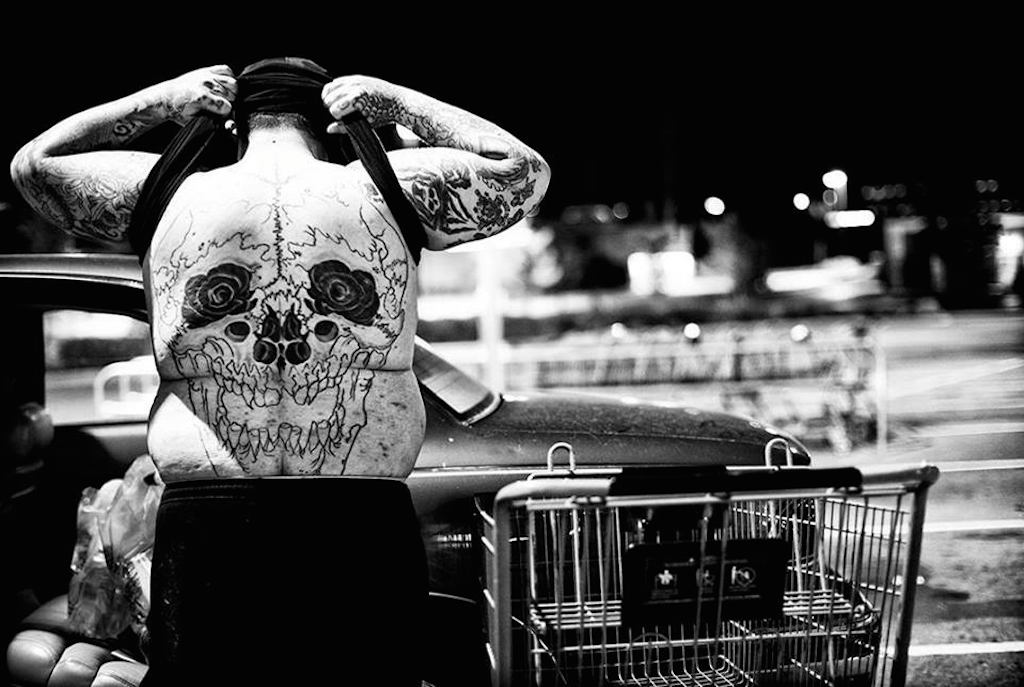 Jon’s work is dramatic and emotional. I went through his photos and I felt that I was experiencing the feelings that he felt when making his photos. One photo in particular grabbed my attention so much that I decided it was so good that I had to feature it in this week’s Streethunters.net ‘Street Photo of the Week’.

From a compositional point of view, the man in this photo is positioned in the 1st vertical of the rule of 3rds vertical lines and his massive bulk is taking up nearly half the photo’s real estate. The photograph is balanced out by the fact that on the right side of the image there is a shopping cart and other small visual elements. If the right hand side of the photo was devoid of visual stimuli the photo would have been ‘heavy on the left’ but now it is just right.

The back of the man has a huge skull tattoo on it with eyes made of roses and a gaping mouth filled with uneven teeth, some of them sharp. The way he is holding his vest puts his hands in a position that in accordance to the top left direction of the light give the illusion of horns sticking out of the skull head. This is where the name of the photo has come from most possibly, or at least this is how I understand it.

Jon has managed to create the illusion of a giant skull with horns by understanding light and composition. He has created a photograph that is unique and conveys a message. The message I get from this photo is that “man is a beast and you’d better be careful”.