Home Weekly Street Hunters pic Someone at the Door

With street photography it’s important to push yourself out of your comfort zone and try something new sometimes. A good way to do this with photography is to try experimenting with shooting with different gear and working within the ‘limitations’ and restrictions this gear can bring. I use quotation marks around ‘limitations’ because you can see from the gear details above that it wasn’t like I was using a Holga or a pinhole camera or something, but I wasn’t using a gear combination traditionally suited to street photography either.

When I shot this photo back in March I was feeling a bit annoyed that the telephoto lens I’d managed to pick up for a great deal back at the start of the year had been sitting relatively unused in my cupboard for a while. I’d actually bought a telephoto with a view to being able to land some sports and wedding photography gigs but none had materialised, and I felt guilty that the lens was being neglected. So, in the absence of any sports events or weddings to gatecrash, I thought I’d challenge myself by using a 70-200 lens for street photography.

I did not find the experience a whole lot of fun. Those of you who are familiar with Canon’s telephoto lenses will know they are not particularly small, and Canon likes to make them even more conspicuous by painting them a white/grey colour. Now, granted my 70-200 isn’t the biggest in Canon’s 70-200 line up – that honour falls to the giant f/2.8 monster with the Image Stabilisation bells and whistles, but at 172mm long my particular lens is not exactly subtle for street photography. Don’t forget to add the lens hood to that measurement too, which on its own is almost double the length of two small prime lenses. Canon decide to make the lens hood out of black plastic, so lens and hood when used together produce a nice ‘look-at-me!’ black and white zebra effect. Hardly ideal for remaining low key on the streets then.

The other thing that frustrated me about using a telephoto lens for street photography was (unsurprisingly) the focal length. I hated feeling so cut off from my subjects, and it was so frustrating having to stand so far back from things when framing. I’ve actually starting to find 50mm too restrictive for street photography now, so to be limited to 70mm at my widest drove me crazy! It’s weird, but in my mind when I look at a street photo shot with a telephoto I really sense the ‘big zoom lens’ effect in it – the perspective looks different and the photo actually appears more cramped and smaller to me. By contrast, photos made with a wide lens seem to fill the whole frame of the picture, and really draw me into them. Perhaps it’s just my imagination coming into play.

Anyway, as you may have gathered, I was not hugely enjoying my telephoto lens street photography experience, and I was finding it more exasperating than enlightening. I missed lots of shots because I was standing too close, and I didn’t like ‘sniping’ at people from far away. As I came off the main road and onto a side street I saw a boy with his hands pressed against the glass of a door. I loved the way the lines in the glass partially obscured his features, and the strong geometric lines which ran parallel and perpendicular to the lines in the glass around the door frame. My first thought actually was “oh great, that’s another shot I’ve missed because I’m an idiot and I decided to use this damn lens”, but I couldn’t let the photo opportunity pass without at least trying to get something. I zoomed as fast as I could (to 90mm) to get a fairly symmetrical composition and fired a frame hoping for the best. I then tried to move in lower and closer for a more balanced eye level shot, but the boy had already moved away from the door. When I checked the photo it had actually turned out better than I had expected, and it was one of only a couple of keepers from a frustrating street hunt. I think the photo would have turned out better with a wider lens if I’d been able to get lower and closer, but then again the boy moved away so fast that perhaps I wouldn’t have been able to make a shot at all without the telephoto. 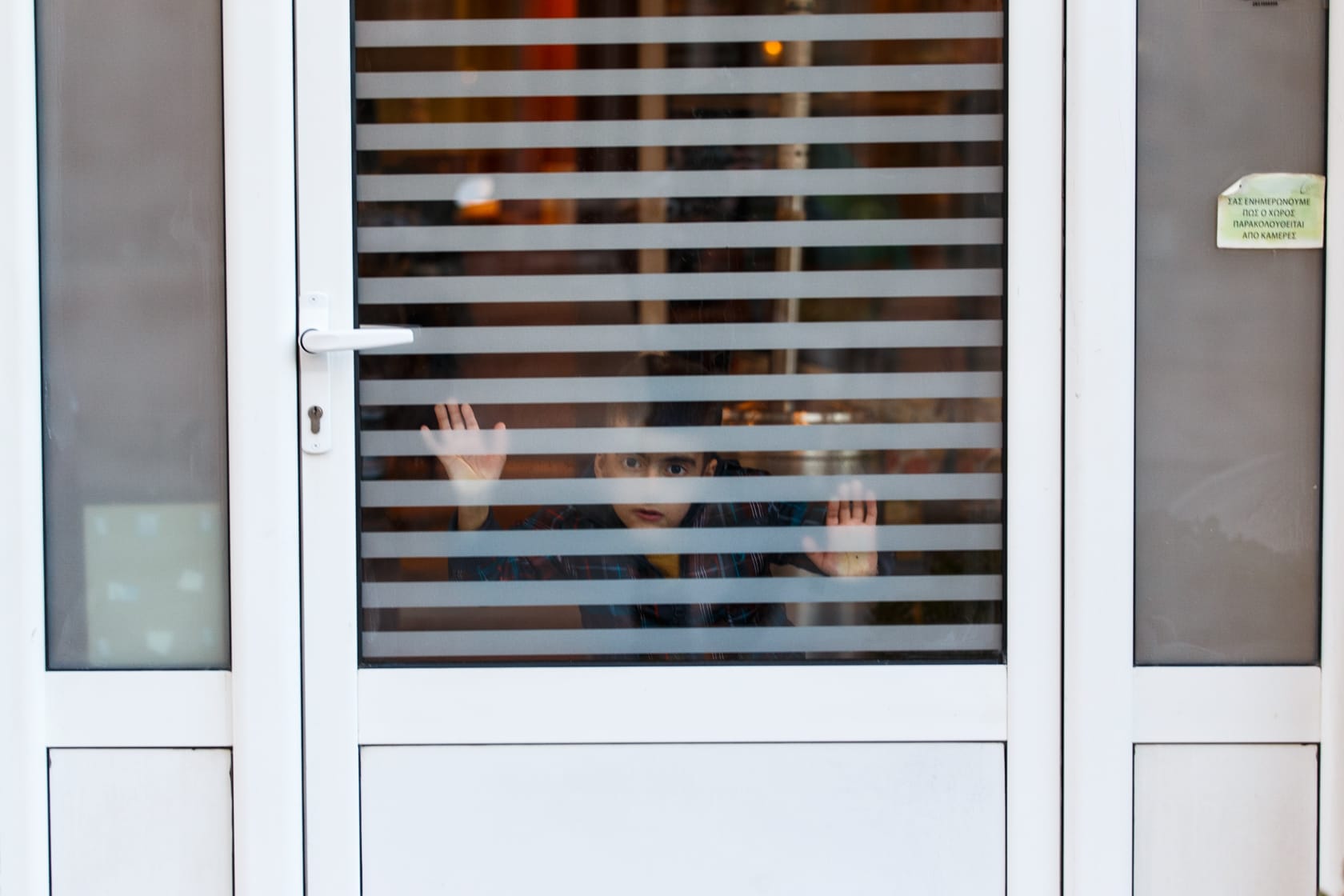